This Fall the Folger Shakespeare Library in Washington, D.C. held an exhibit of a single printed copy of the Complete Works of Shakespeare.

The Folger’s world-renowned collection includes 79 copies of the First Folio, the 1623 edition of Shakespeare’s Collected Works. You might expect this exhibition to have displayed a rare Folio – one with Anton Van Dyck drawings, say, or rude Latin remarks by Ben Jonson. This book, however, was a 1970s edition of a single volume Complete Works first published in 1951 and edited by Professor Peter Alexander. It was the sort of book that inspired tweedy Professor Geoffrey Bullough to say upon its publication, “Both publishers and editor are to be congratulated on presenting so sound and substantial a volume at so reasonable a price.” Affordable in cost, solid in its scholarship, it became one of the most widely distributed Complete Works of the 20th century.

But this copy of that popular, commercially successful 20th century book, congratulated on its thrifty, bourgeois values by the academic establishment, has a singular and radical history.

In 1972, Sonny Venkatrathnam was confined to South Africa’s Robben Island Prison for political crimes. Besides a religious text, prisoners were permitted only one book. “My problem was what to buy to last me a long time,” Venkatrathnam said. He asked his wife to send him Shakespeare’s Complete Works. On a limited budget, she bought the Alexander edition for her husband to read in prison, a use that Professor Alexander and his publishers probably never imagined for that sound and thrifty volume. 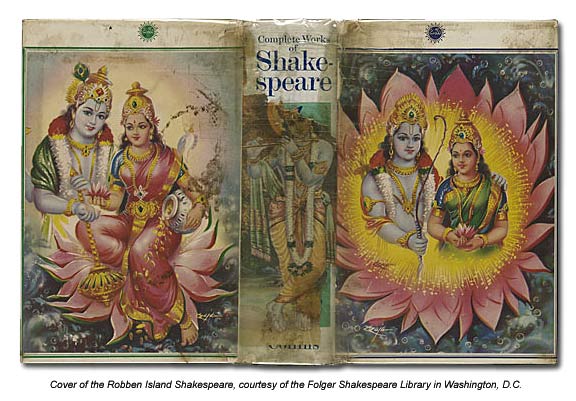 Later the rules changed, and the book was taken away. Here is what happened next:
[O]ne Sunday, when services were held at the prison as usual, Robertson, known as the most racist warder on the island, told Sonny to get his Bible. Sonny replied that he had left it in the storeroom. He was allowed inside the storeroom and grabbed his book from the shelf, telling the warder: “See the bible by William Shakespeare.”
Ironically, of course, the Hindu prisoner of South Asian descent, a well-educated English major, knew more about anglophone high culture than his white Christian guard, who apparently found the idea that William Shakespeare wrote a Bible plausible. The next week, Venkatrathnam glued Hindu Diwali prayer cards on the covers to support the claim that it was his “Bible” (Hindus do not have a Bible, a fact of which his guards were also ignorant) and managed to hang on to the book for most of his sentence.

From 1975 – 1978, Venkatrathnam occupied the single-cell section of the prison where the leaders of South Africa’s opposition were held, and his Alexander edition of the Complete Works circulated in this group. He asked his fellow prisoners to sign his book next to significant passages: it has 33 signatures, including Nelson Mandela’s. Those signatures and that history are why the book has become an international exhibit, including the Folger show. 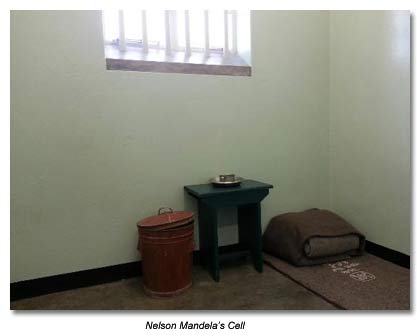 Shakespeare’s Complete Works was Venkatrathnam’s “desert island” book. The archetypal scenario of being marooned on a desert island (e.g, The Tempest, Robinson Crusoe, “Gilligan’s Island,” to name a few) corresponds to his prison sentence: Venkatrathnam was marooned by his country’s laws in an island prison a few miles off the coast of continental South Africa.

Perhaps Venkatrathnam felt about Shakespeare’s plays as Prospero did about his books, rescued for him by the compassionate Gonzalo:

Knowing I loved my books, he furnish’d me
From mine own library with volumes that
I prize above my dukedom. (1.2.166-68)

Prospero’s library, like the household gods Aeneas took with him in his flight from Troy, gave Prospero the intellectual material for re-inventing the civilization that expelled him. Perhaps Shakespeare’s plays and poems provided the Robben Island readers with material for transplanting a version of civilization to prison. Unlike Prospero’s books, which gave the magician supernatural power to control the island inhabitants, the Robben Island Shakespeare did not give the prisoners who read it any real power over their guards or their political enemies outside the prison. But Shakespeare’s plays and poems may have offered knowledge that made another kind of power possible, the power, for instance, to free one’s mind, even if one’s body is marooned, and to remember that one is, in spite of prison, still human and that one has, in spite of exile, a home across the water.

The story of Venkatrathnam’s book is read as an allegory of the value of Shakespeare’s work: it would seem to support the universality of Shakespeare’s plays; it argues for the expansive value of literature against the repression of prison, social injustice and violence; it suggests that even the most canonized and institutionalized text might serve a radical purpose; it supports our hope that Shakespeare’s texts work against social injustice. Anthony Sampson, Nelson Mandela’s biographer, believes that the South African opposition leaders found most solace from Shakespeare when they were imprisoned on Robben Island. The prisoners included Africans, Indians and Coloureds, Muslims, Christians and atheists; but they found a common supporter and teacher in Shakespeare, whose understanding of human courage and sacrifice could reassure them that they were part of a much larger world.”

Perhaps. I hope so. But the “much larger world”; that Shakespeare represented in Sampson’s view was also the European colonial culture that helped shape the unjust laws that imprisoned these men. Like the Bible it was mistaken for, Shakespeare’s Collected Works offers scope for a range of imaginations and rationalizations — courageous, compassionate and, sadly, morally corrupt. Ask Caliban whether the knowledge in Prospero’s books could not also be used to oppress others, and then rationalize that oppression.