“The Arden Forest is like all Shakespeare forests, except that it is possibly more amazing, as if it contained, repeated or foretold them all. Shakespearean forests are real and enchanted, tragic and grotesque; pathetic and lyrical scenes are performed in them . . . The Forest of Arden [is] the most English of all Shakespearean Forests. It is like the one in Warwickshire, near Stratford . . . It is a real forest, as well as a feudal utopia, and a sneering comment on that utopia.”
Jan Kott, “Shakespeare’s Bitter Arcadia,” Shakespeare, Our Contemporary Thomas Lodge set his prose romance Rosalynd (one source for As You Like It) in the Forest of Ardenne in France. With the Folio spelling of “Arden,” Shakespeare’s forest is coincidentally given the same name as the forest located in Warwickshire, just north of Shakespeare’s hometown. His parents and grandparents grew up in villages in the Forest of Arden; his mother’s maiden name was Arden. Thus, for Shakespeare, though Ardenne was the Gallic site of a sylvan utopia, Arden was British, a real and familiar place.

Oak was and is the predominant tree species in Arden. Two references in As You Like It are specifically to “ancient oaks.” That specific description suggests to me that Shakespeare incorporated realistic details of a forest he actually knew, Arden, with the elements of fantasy. 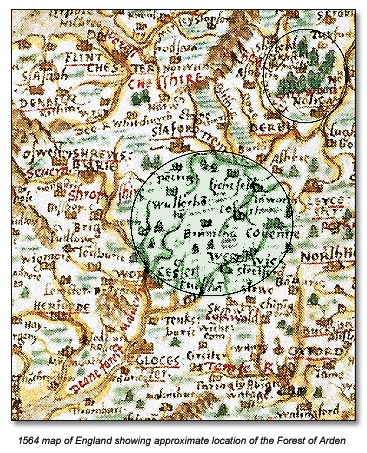 16th century Britons knew that the Forest of Arden with its oaks was much diminished from its ancient, impenetrable extent. Warwickshire natives watched — and profited from — the deforestation to provide lumber for the navy, the national building boom, and charcoal for foundries that produced ordinance. It was, then, a nostalgic place, like Sherwood Forest where Robin Hood supposedly lived, and simultaneously a vital resource for the national military industrial complex, a place that loomed mightily in folk tales and memory, and declined – visibly in the present — as it fed England’s economic and global dominance.

Here is a section of a 1564 map of England. The circle marks (roughly) where Arden is. At about 5 o’clock in the circle, you can see Stratford labeled just below the Avon River. In As You Like It, Charles the wrestler compares Duke Senior with Robin Hood, a legendary Anglo-Saxon outlaw who established a feudal utopia in Sherwood Forest that was safe from the Sheriff of Nottingham. The trees circled in a group in the upper right-hand corner indicate Sherwood Forest: Robin Hood and his Merry Men would not have been far off from the headquarters of the exiled Duke in Arden.

Robin Hood seems to have been invented in the Renaissance: he’s an idealized, fictionalized outlaw, in other words, and his Sherwood Forest is an idealized place, one where Robin and his men live well and do good. But he and his stronghold in Sherwood Forest were doubtless inspired by actual and distinctly less-than-noble criminals who preyed on travelers and hid in the Forest beyond reach of apprehension. The extent of Sherwood Forest and the Forest of Arden in the Middle Ages would have made it very difficult to track down a band of forest-savvy outlaws.

The reality of forests as potential strongholds for criminals is far from imaginary, even today. Forests can shelter men both good and evil.

You may have read about Boko Haram, the violent terrorists in Nigeria who have slaughtered, kidnapped and terrorized innocent citizens with impunity. They are using the Sambisa forest, a 60, 000 square-kilometer game reserve in Northern Nigeria, as a stronghold. The forest consists of trees and dense thorny vegetation that only a man with a machete can enter. The overwhelmed Nigerian military has been totally unable to dislodge the terrorists from or attack them in their forested stronghold. 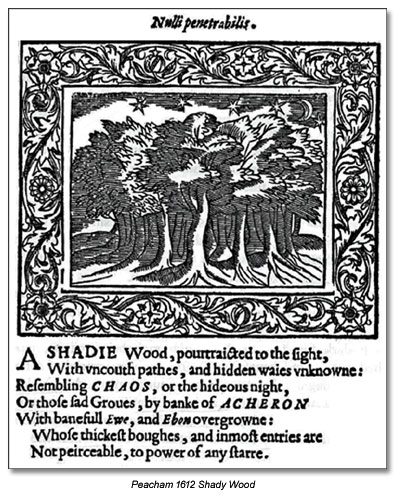 Here is a 16th century emblem entitled Nulli penetrabilis (Latin for “nothing penetrates”). It shows a forest impenetrable to light and all that light represents: its “thickest boughs and inmost entries are/not pierceable, to power of any star.” The emblem is a version of “una selva oscura,” the dark wood in which Dante loses his way in the opening lines of The Inferno:

Such forests, controlled by men such as the Boko Haram, exist outside of literature. Nulli penetrabilis, nothing, that is, nothing good, penetrates such a place.