Banquo asks this of the Three Witches at the beginning of Macbeth:
“If you can look into the seeds of time,
And say which grain will grow and which will not,
then speak to me . . .”
(1.3.152)

If today we were to run into Weird Sisters, say in the parking lot of Whole Foods, we might ask a similar question. (Speaking as an expert on Shakespeare, if this should happen to you, I would advise you to be polite, but keep moving. Put the grocery bags in your Prius and go straight home.) We would be tempted to put Banquo’s question to the Witches because we all, in various humble capacities (as students, parents, homeowners, soccer coaches, business managers, voters, and Prius owners, among other roles) invest in the present to shape the future. But we don’t know which “seeds of time” will grow, or what they will grow into. We can only work hopefully, by the light of imagination, in the dim precincts of the present. 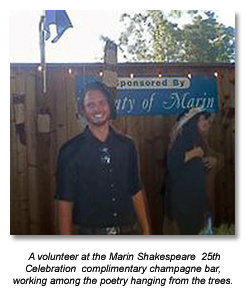 The Silver Season Celebration and Season Opening performance of As You Like It for the Marin Shakespeare Company on Saturday, July 12, was a celebration of the spectacular growth of various seeds planted in the past, primarily, of course, Bob and Lesley Courier’s commitment to found the Marin Shakespeare Company in 1989, a commitment tested almost immediately by the Loma Prieta earthquake.

As You Like It, Marin Shakespeare’s first production, nonetheless premiered in 1990 and flowered – with years of hard work, generous community support, talent, and good luck — into this production of the same play, 25 years later.

On Saturday, Bob Courier’s excellent production of As You Like It played to a full house, including jugglers, journalists, servers and eaters of free dessert, pourers and drinkers of free champagne, politicians, picnickers, students, theater folk, board members, subscribers, first-time attendees, friends, families, and out-of-town visitors. The theatre sported new lights and new acoustics, and the Couriers are looking ahead to more improvements in the future, supported by a one-million-dollar unrestricted donation.

In 1961, Ann and John Brebner began the Marin Shakespeare Festival and later worked with Dominican University (then, College) to build the Forest Meadows Amphitheatre. (I enjoyed speaking with Ann Brebner in the audience on Saturday, invited by the Couriers to enjoy the historic performance.) The Marin Shakespeare Festival ended in 1972, but memories of those shows prompted local theatre lovers to invite Bob and Lesley to San Rafael some fifteen
years later. 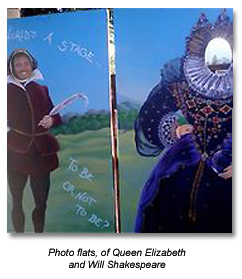 Memories of performances can become seeds that grow into new art and new audiences. Let’s travel to Warwickshire, England in the 1560s and 70s, to the town of Stratford Upon Avon. In rural Stratford, performances of the religious mystery plays would have been out of the ordinary, holiday events. Presumably, Shakespeare would have attended as a boy with his family. Was he thrilled when an actor, usually a baker, his face smeared with burnt cork because he was playing a devil, laughed maniacally and pulled a respectable burgher from the audience to his eternal torment? Did Shakespeare take the memory of a devil on a wagon stage with him to the commercial stages of London?

I think so. I think it grew into Shakespeare’s version of Richard III, the hunchback who turns to the audience and gleefully boasts that he is playing the devil. Did the erstwhile baker in black face imagine in 15 70 that his performance might become material for a play to be written some twenty years later by the wide-eyed kid in his audience, and still performed hundreds of years later on a brand new continent? Even after enjoying the generous amounts of local ale provided by the Stratford Aldermen, I seriously doubt the notion ever entered his mind.

Unlike printed books, theatrical performances have no future: they exist entirely in the present and end, complete in themselves, as soon as the audience applauds. But in the minds and hearts of the audience, as with 16th century mystery plays and 20th century Shakespeare festivals, certain performances can become seeds that grow into the future in unexpected ways. 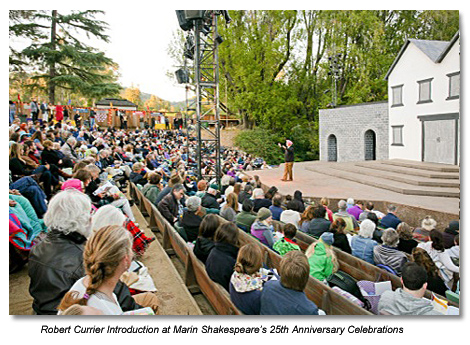 Think about the moments that drew Lesley and Bob in to the theater. How old were they when they first saw a play? Who took them? What did they see? How much time passed before they stood in the wings of a theater, waiting to go on, and knew that that moment would be the first of many such?

Over the next few weeks, I’d like to share a few of these transformative memories from the cast and crew of As You Like It. But I’d also like to share your memories. Do you have a formative memory of a Shakespeare play — seeing one, acting in it or reading it in a class? How old were you? How did it make you feel? Is that memory why you attend Shakespeare plays today? Tell us about it.