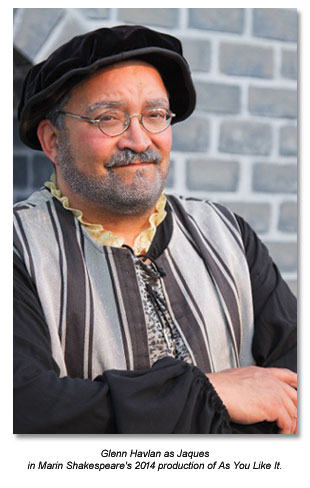 Glenn and I sat down one evening a couple of weeks ago and discussed this multi-faceted character and his role in
As You Like It. Glenn also shares some personal notes about what it’s like as an actor to deliver one of the most well known speeches in Shakespeare, the one that begins, “All the world’s a stage.” Glen speaks knowledgeably about the history of the part, but he also adds imaginative insights into Jaques’ pre-play history and — my favorite part — his future, after the play ends. I think Glenn may have the makings of a novel on his hands.

) (who, by the way, played Amiens in Marin Shakespeare’s 1st production of As You Like It 25 years ago).