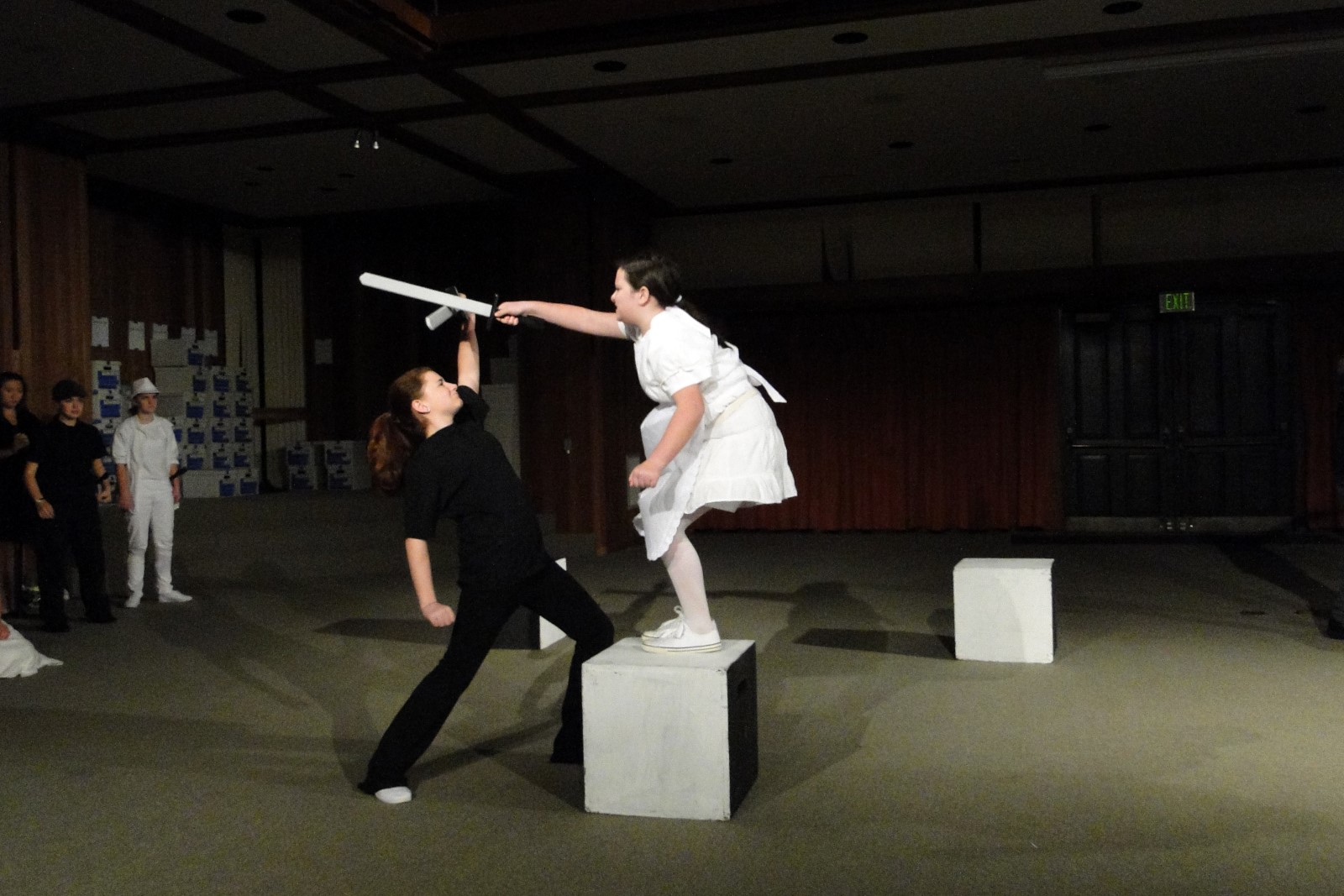 Break a Leg by Abby Green

“All the world’s a stage, and all the men and women merely players…” Although As You Like It is one of the Shakespearean shows I have not yet been in, this is how I choose to live my life. Shakespeare and performing are two of my greatest passions. My love for acting started when Marin Shakespeare Company came to my second grade class, once a week, to play theater games with us, as well as learn some basic Shakespeare. After the first class our teacher, Matt, taught, I knew that this was something I enjoyed and wanted to continue. So, my mom signed my brother and me up for one of Marin Shakespeare’s Young Company summer shows. The play we were going to be putting on was Hamlet. My mom was skeptical at first and kept thinking, “Hamlet, with eight year olds? How does that even work?” But, Matt (who was going to lead the camp and also taught in her classroom) reassured her and said it was going to be terrific.

He was definitely right! That camp was probably the most fun two weeks of my life! I made many new friends (some of whom I’m still friends with), learned a ton of new things, and had a great time playing the role of Rosencranz in our abridged production. When the performance came around, the entire cast impressed the audience (of primarily parents). We put on of the most challenging shows of all time in two weeks with eight to twelve year olds. That’s pretty impressive, if I do say so myself. This show was a turning point in my performing career and made me realize that acting was something I really wanted to pursue, especially with Marin Shakespeare.

So, of course I continued with Marin Shakespeare’s many youth programs. The next summer I did Much Ado About Nothing, and the summer after that I was in Twelfth Night. I eventually got to the point where one camp wasn’t enough so I started doing two. I played Katharine in Taming of the Shrew and Oberon in Midsummer. I was challenged by Lady Macbeth, and then stretched by Ariel in The Tempest.

This became the greatest part of my summer and that’s why, when I was 12, I signed up for Marin Shakespeare’s Teen Touring Company. TTC is a wonderful program where a group of teenagers come together to rehearse a play for about two months and then perform it at approximately fifteen different venues over the course of about two and a half weeks. We performed all over the Bay Area, from Sebastopol to San Francisco, Forestville, Sonoma, and everything in between. Our venues were at retirement homes, schools, and community centers. My first Teen Touring show was Romeo and Juliet, and I will never forget how much that show changed my life. This was one of the first plays I was in where I could really learn from all the of the older actors and better myself as a performer. I also met many wonderful people, many of whom I still keep in touch with and consider part of my family. I know I am slightly biased, but the show was beautiful. We never went to a venue where we didn’t have a crying audience. I learned so much from every single person in that show, and I can honestly say I would not be nearly as good as an actor without that terrific experience.

I continued to participate in Teen Touring as well MSC’s other teen programs, and I grew with every single production. My favorite of all of these was probably King John. That summer camp was full of fantastic memories and inside jokes that still come up whenever I talk to one of my best friends (who played my mother in the show). There is no doubt that was a show that had one of the best cast bonds of all time. All of us became a family in only three weeks. That just goes to show how great the atmosphere at Marin Shakespeare is.

As you can see, Marin Shakespeare was always my favorite part of year, but this summer I had to make a really difficult choice. I was originally put on the wait list for Marin School of the Arts’ theatre program and I knew that it was really important to show my commitment by taking the dance program the teacher encourages the entire department to take. I really wanted to do MSC’s summer production of All’s Well That Ends Well, but I knew that then I would be way less likely to get into MSA. Marin Shakespeare was a part of my life since I was seven, and it was really hard for me to picture my summer without the laughs and memories of it. This decision wasn’t remotely easy to make, but eventually I thought about my future. MSA had been a dream of mine since elementary school, and I couldn’t throw away my chances of getting in for
camp. So I decided to stick with the dance program, which definitely turned out to be the right choice. Not only did I improve my dance abilities greatly, I met some new people, became an MSA Theatre Arts student, and I actually have a little dance feature in the MSA fall production of Hello Dolly, too.

I would be lying if I said I said I didn’t miss Marin Shakespeare; I do. MSC is the reason I discovered my passion for acting, it made me want to get better and better and be a part of MSA, and without MSC, I would have never been MSA ready. The experiences Marin Shakespeare gave me are going to continue to benefit me through my entire life, and I couldn’t wish for a better way to have spent my childhood summers.