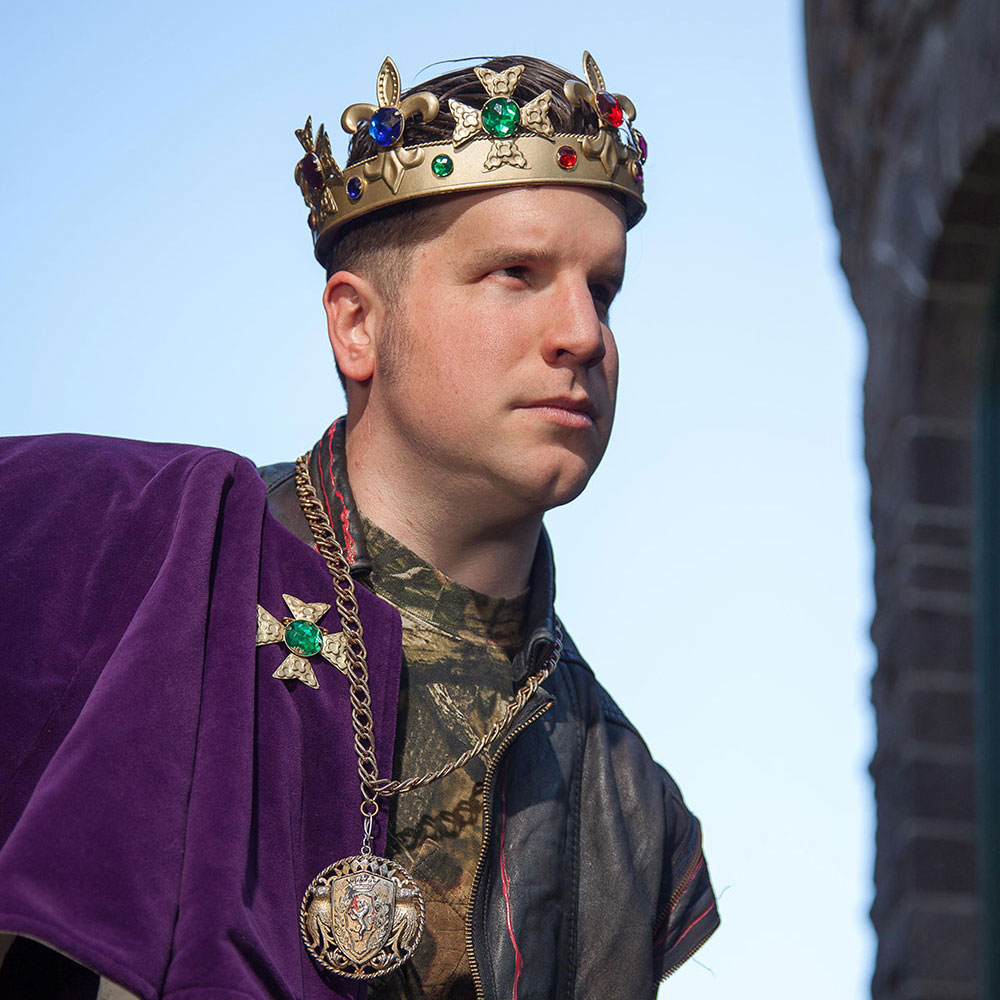 “Now is the winter of our discontent
Made glorious summer by this son of York.”

Richard III opens with a display of Richard’s vocal dexterity—with a pun and verbal irony. His verbal flexibility suggests his moral dubiousness—hardly surprising in a king famously reduced to “Dick the Bad” in a rhyme traditionally taught to British school children. Richard remains infamous as a murderous, ambitious king—an image some historians have dismissed as a mere piece of Tudor propaganda. But Shakespeare’s play presents us with more than propaganda. Shakespeare spins a tale of moral ambiguity and political instability motivated by self-interest, and at the center of that story is Richard, a man misshapen both physically and morally who drives the course of events with irresistible skill.

With the exception of Hamlet, Richard talks more than anyone in all of Shakespeare’s plays. He sets his stamp on this play from the outset, opening with his famous soliloquy, ostensibly celebrating the York defeat of the Lancasters. Perhaps we the audience are included in what initially appears to be a celebration of peace after civil war—“our” discontent has ended with the restoration of apparent stability. But Richard’s “our” can also be his own sense of individual primacy with the implication of a royal “we”—his discontent is over now that his family is in power. “Now” is his time—but his time will not be shaped by tranquility of spirit or of action. An important aspect of the play—and Richard’s villainy—is the sense of the “now.” Now is the time—but why and how will Richard’s determination find expression is the question.

Richard does not know how to exist in this newly established peace—or rather, can only exist as subversive to peace. He is not alone in resisting this transition from war to peace in Shakespeare’s plays: Othello and, in a much lighter vein, Much Ado About Nothing also address the difficulty soldiers find in returning to a time of peace after war. Men who define themselves as soldiers need to find new roles for themselves after the battles. For Richard, this discomfort with peace stems from his very sense of himself.

In Shakespeare’s plays, characters often reveal their true natures against a background of war—their bravery or cowardice in battle, for example. Here, peace creates the background against which Richard’s villainous nature emerges. In war, Richard’s treachery is useful—necessary, even. The Yorks capitalized on it in their bid for the throne. They fought against the Lancasters for years trying to secure their family as the rulers of England. According to Hall and Holinshed, Shakespeare’s primary sources for the story, Richard killed both the Lancastrian King Henry and his son and heir Edward. At the opening of the play, the “son of York” who rules England is Richard’s eldest brother Edward—and Richard arguably was the most instrumental in getting him the throne. The shift from war to peace and the ascendancy of Richard’s brother should give the collective Yorks a “glorious summer.” Richard, however, cannot cease his bid for power and the deadly traits that once proved so helpful to his family and their allies now begin to turn toward those family members and friends.

All of Shakespeare villains are opportunists. No matter how long dormant, the evil within them finds expression as the proximity to power increases. Richard is the brother of the newly crowned king, a position that places him tantalizingly close to power yet with no direct path to the throne. Ascendency was based on primogeniture, meaning that the first-born son would reign after his father died. All of the direct descendants of the king are in line for the throne before any of his brothers. Richard, therefore, would only inherit the throne with the deaths of both of his brothers—since George, Duke of Clarence, is the middle son—and the death or proven illegitimacy of all of their heirs. There are several family members in the way, but Richard strides toward the throne without the inconvenient baggage of moral restraint. For at least most of that journey, we the audience are made willing—perhaps complicit—witnesses of his prowess.

Richard transposes the tensions and suspicions of war onto the current political scene. This is not difficult to do. Richard does not need to reinvent the world; he just manipulates the loyalties and suspicions of this shaky, newly established, political power. Richard is manipulative—but would not be so successful were it not for the tensions already present within the York family and among their allies.

In this play, political supporters line up according to a sense of who is likely to succeed as much as who is in the right. Relationships to relatives and spouses can imply a secure loyalty, but as the wars between the Yorks and Lancasters show, one cannot assume family loyalties to be unbendable. (The Yorks and Lancasters are branches of the same royal family.) In an early scene in the play, we get a sense of how quickly allegiances change when Hastings is released from prison. We also hear about Clarence’s shifting loyalty; he had been a supporter of his father-in-law Warwick and backed the Lancastrian bid for the throne—until he shifted over to support his brother and the Yorks.

Richard manipulates assumptions of family loyalty and bias to his own benefit—while ironically possessing no true family loyalty himself. Some people seem surprisingly ready to side with Richard.

While we do not excuse Richard’s behavior, Shakespeare’s villains often reveal the flaws in others as much their own flawed morality; indeed, they can be dependent on those flaws to find a reason or at least an opportunity to do what they do. Because of that, perhaps, we are able to at least admire the skill of Richard’s manipulation as he woos Lady Anne, the widow of the Lancastrian Prince Edward, and deceives his brothers Clarence and Edward. We do not condone his actions, but neither do we admire Clarence’s credulity or Lady Anne’s frailty. In spite of his opening words about not being a lover, Richard is actually a very effective seducer of men and women. For much of the play, we the audience are perhaps seduced by this compelling person as well.

Harold Bloom sees Buckingham as the stand-in for our leaning toward Richard. Buckingham eventually will separate himself from Richard—when the moral stakes become too high even for him. In the play, Henry Tudor, Earl of Richmond, shows up to give us a comforting, moral alternative to Richard. For some, this alternative arrives too late; they are already damaged and doomed by their own moral and political choices. Others find their future in Richmond.

“Tudor” is the family name of Queen Elizabeth I, who reigned as Shakespeare wrote this play. Richmond’s arrival ends the Wars of the Roses. Henry Tudor’s defeat of Richard and marriage to a York resolved the war in family unity; the combining of the white York rose with the Lancaster red rose to form the pink Tudor rose became a compelling visual symbol of this resolution. We end with a send-up of the great Tudor hero in what might be seen as a convenient choice on the part of the writer. And yet I think Shakespeare qualifies that send-up, too.

Shakespeare alters very little in the history as it was presented to him—and what he does alter, he changes for dramaturgical purposes: the timing of Richard’s wooing of Anne, for example, or the presence of the deposed Margaret. The story endures for the compelling nature of its main character far more than for Richmond, as I think Shakespeare knew. We’re not given much time or space to be won over to Richmond. We feel relieved by his presence and the hope for a better future, but we don’t get much from him except some fairly textbook “good guy giving it up to God” speeches. But we need a release from this murderous, corrupt world—and he provides it.

Even in a play about a murderous bid for the throne, we see aspects of human nature that remain relevant. The world of the play is a monarchy, but we see all manner of political shifting and dubious, self-interested decisions that do not seem so far removed from our own time and place. We hear the words “curse” and “prophecy” and yet over and over again, we see people making their own flawed choices and suffering the consequences. We see the nature of men who can commit acts of evil and the nature of those who will tolerate or turn a blind eye toward that evil while it serves their own purposes.