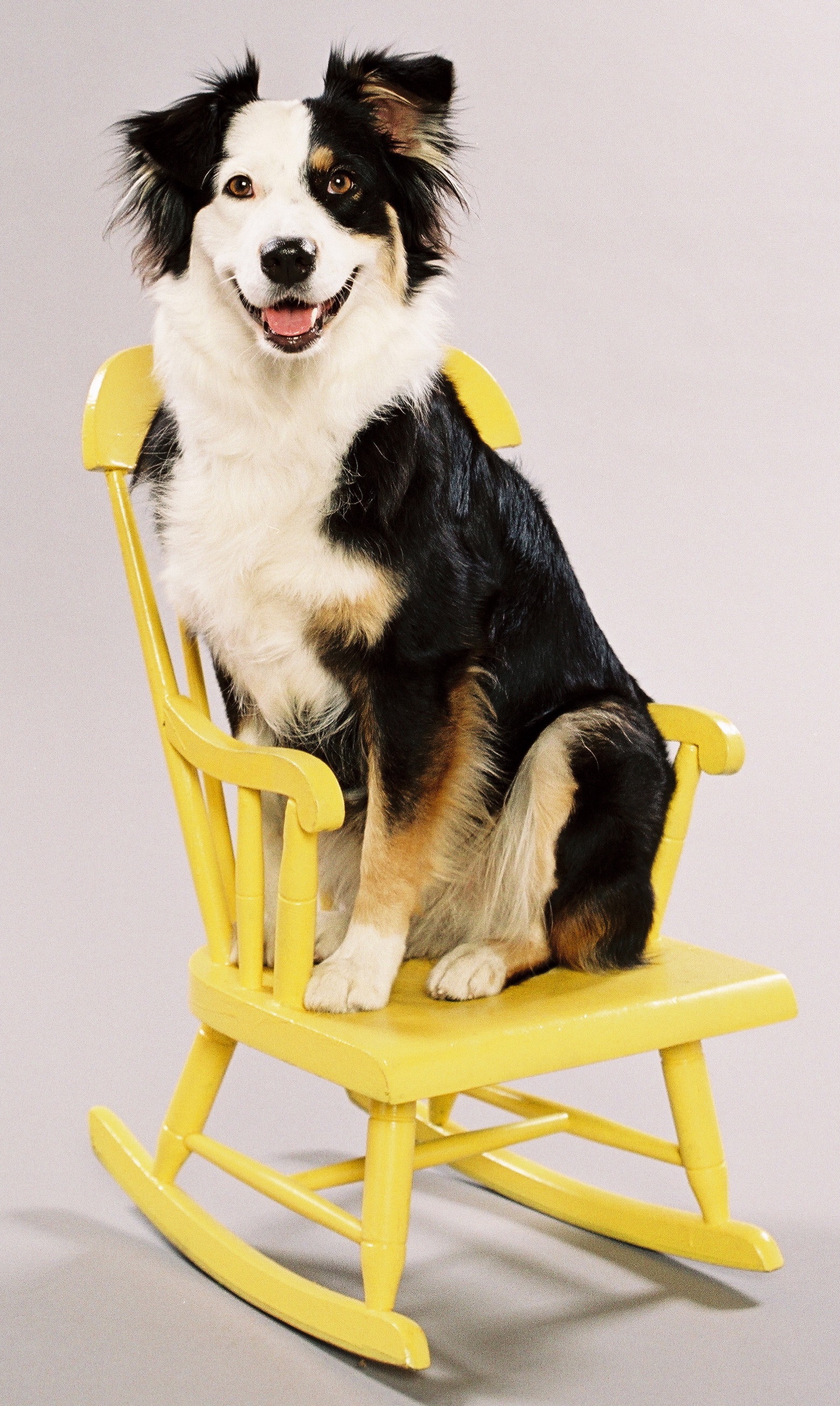 On January 24th, 2001 a female Australian Shepherd was born alongside 10 brothers and sisters in Fresno, California.  This pup would later be known as “Bonzer”, Australian slang for “Terrific”.
A series of serendipitous events led Bonzer to her “two-legged” mommy, who was a performing artist named Diane Wasnak, also known as “Pino”.
At 7 1/2 weeks old Bonzer was already a special dog.  Beginning day one, Diane would say in her most aging Hollywood diva voice —
“Baby, Mama’s gonna make you a STAR!”
Bonzer was enrolled in puppy class at the San Francisco SPCA, where both Diane and she learned the art of “clicker training” and the technique of “shaping” with positive reinforcement. Bonzer was a social butterfly, going EVERYWHERE with Diane and being exposed to all of Diane’s performing friends — jugglers, rope-spinners, musicians, acrobats and actors at places like the San Francisco Circus Center where Bonzer learned to walk on a big ball and how to jump over Diane as she somersaulted forward and backwards.
One day the A&E Network was taping a special called “Under the Big Top” on how circus performers rehearse.  They were interviewing the late Peggy Ford as 3 month old Bonzer walked on a giant ball behind her.  Bonzer was a little sponge learning trick after trick…she made up her own too!
When Bonzer was 4 months old, her “upright mommy” Diane was cast as a stunt-double for Jada Pinkett-Smith in the MoCap Unit of the “Matrix” game.  Bonzer tagged along to the set and was lavished with attention by cast and crew.  Spectrum Pictures planned on making a new demo after the shoot. Four month old Bonzer was outfitted with a MoCap suit and became the first “MoCap” dog.
Also during this time, Diane had a part-time job as a character named “Cable Car Casey” where she would give lofty San Francisco histories and information to tourists waiting in line to ride the cable car.  Diane took little Bonzer with her and would practice the skills Bonzer had learned. Bonzer would happily greet people from all over the world and she was dubbed “The Cable Car Dog”.  The tragic event of 9/11 brought that happy job to end, but it was the beginning of the duo act of “Pino and Bonzer”.
What started as Bonzer’s cute exploration of a child’s rocking chair that Diane happened to witness, eventually developed into a 7 minute comedy act.  To quote the late Gil Miller of the Gil Miller Talent Agency in Las Vegas it was:  “A classic Vaudeville style dog act…A CLASSIC!”
One of Bonzer’s first shows was at the beautiful Fairmont Hotel in San Francisco.
Bonzer was an actor too. Barely one year old, she was cast in Theatre Rhinoceros production of “Women Behind Bars” as an inmate’s dog.
Later that year “Pino and Bonzer” were hired for a 6 month contract on Royal Caribbean Cruise Line as guest entertainers.  Bonzer was a hit with the crew as well as the passengers.  So much so that the Captain would invite her to his quarters for “Thursday Waffles” along with the elite officers and his special guests. Bonzer received a plaque on the Adventure of the Sea’s Wall of Honor for being the first non-human crew member.
When Bonzer was not working on the ship, she would enjoy the Caribbean beaches, digging holes in the soft sand and taking a nice swim in the blue water with Diane.  Bonzer was also a Canine Ambassador to many local Caribbean children who were taught to be afraid of dogs.  By the end of the contract, many children would know her name, flock to see the dog that could skateboard, and gently give her a scratch on the butt.
The summer of 2003 Bonzer was cast in Marin Shakespeare Company’s production of “A Midsummer Night’s Dream” along with Diane.  Diane was “Puck”.  Bonzer was Moonshine’s dog who would scamper off to play with Puck on occasion.  At least that is how it fit into the continuity of the play.  Bonzer was integral in the fight choreography for the “Chaos’” scene in which Puck places the ass head on the character of Bottom and all Hell breaks loose. Bonzer would push over certain cast members, jump on others…etc…
Just before the show opened, Diane became seriously ill and was hospitalized.  The Managing Director donned Puck’s costume and Bonzer performed perfectly beside her and did all of her cues while Diane was in the hospital.  Diane recovered and joined Bonzer to finish the run.
Bonzer and Diane relocated to the midwest performing at festivals and special appearances. Highlights included a show at Diane’s Alma Mater “Celebration Barn” in Maine and venturing back to California for a show benefiting “Circus Arts in the Schools”.
At an AFTRA union meeting in Ohio, Diane met singer/songwriter/voice artist, Barb Polk.  Barb started helping Diane and Bonzer with the “Pino and Bonzer” show at local events.
After much thought, research, and vetting, Bonzer and Chase (Aussie Champion “Catch Me If You Can”) had a brief relationship which resulted in Bonzer giving birth to four beautiful pups. Three boys and a girl.  Barb picked the blonde boy, Cooey.  Diane kept the girl, Bizzo.  The other 2 pups went to fantastic homes of friends in Myrtle Beach (Foster) and Atlanta (Boomer).
Bonzer, Bizzo, Cooey, Barb and Diane developed the show “Divas and Dogs” and Bonzer Productions was born!  Comedy.  Music. Canines.
The fall of 2006 Bonzer, with Diane had her Broadway debut in the musical, “Busker Alley” directed by Tony Walton.  Bonzer was cast as “Mate”, opposite Annie Rogers. The cast included other Broadway stars, Glenn Close, Jim Dale and George S. Irving.  Bonzer was adored by all including composer Dick Sherman and playwright A.J. Carothers, and received applause from the audience every time she stepped on stage.
The following summer, 2007, Bonzer went back to her circus roots with Circus Flora of St. Louis:  A review from St. Louis “The Current” by Cate Marquis read:

“A silent lively little Chaplinesque Figure, is bedeviled by a mischievous     Australian Shepherd named Bonzer with hilarious results, both their comic timing     and tight coordination in intricate, lightning-fast stunts were humor delights.”

Bonzer enjoyed her time off too.  Sled riding in winter, frisbee in spring, swimming in summer, walking colorful woodsy trails in the fall…and thousands upon thousands of miles of rides to see friends and family from all corners of the USA.
A partial list of Bonzer’s other credits include:  TV’s Animal Planet’s Funniest, Ripley’s Believe It or Not, Sabado Gigante, and the movie, Doggie B.  Her commercial clients included, Iams, Alltech, Proctor and Gamble and Gilden.
As Diane would tell you:  “Bonzer was my light and life.  When I said, ‘Baby, Mama’s going to make you a STAR!’.  Bonzer did all that and more.”
As of August 29th, 2015, Bonzer can be seen in the night’s sky shining forever.