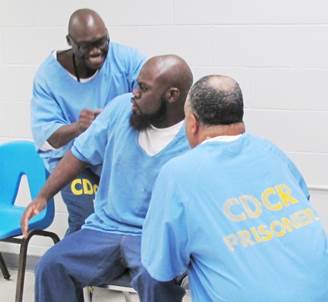 Vacaville, California (CNN) Nineteen years ago, Joseph Jackson was a drug dealer unloading his gun into two people he thought had infringed on his turf.

Today, the convicted killer sings and dances on stage in a white velvet coat.
His fellow actors have similar stories: Christian Birdsall strangled a woman who trusted him with odd jobs around her house.
Pharaoh Brooks beat a man nearly to death with a baseball bat. Three violent criminals, but you’d never know it as the men display surprising mastery of one of the most sophisticated playwrights in history.
Their modernist performance of Shakespeare’s “The Tempest” is the hottest ticket inside Solano State Prison, as dozens of inmates watch fellow hardened criminals transform into actors.
“You got these so-called hardcore felon, gangster, murderers, robbers, thieves all pumped off Shakespeare,” Brooks said. “So take that, society!”
Advocates argue that teaching Shakespeare in prison could benefit society both inside prison walls and eventually outside them, too.
“What we’re trying to do is change the culture in prison and really give the inmates an alternative to violence,” said Solano’s Lt. John Ojo.
That alternative comes via a $3.5 million state grant for the Arts in Corrections program, which contracts with outside organizations to bring culture into 19 prisons across California.
“It gives me a space to showcase the new me,” said Jackson, now 38 and serving a life sentence.
“I think about that double murder every single day, because I’ve affected so many people,” he added. “And it’s propelling me to be the best man that I can be.”
At stake is not just the quality of life behind bars. California has the second largest inmate prison population in the nation and the state has struggled to keep inmates from cycling in and out of the system. Fixing this revolving door is a pressing question for policymakers hoping to save money in an already cash-strapped system.
“It will eventually decrease victimization for everybody,” said Lesley Currier of the Marin Shakespeare Company, which holds the state contract to teach Shakespeare at Solano.
With the program barely two years old, its success can only be measured anecdotally.
“Of all the men who have been our students and gone out into the world, there’s only one we know of who has returned to prison,” Currier said.
But there are ardent opponents: some crime victims, who see prisoner enrichment as an avenue for inmates to gain sympathy with the parole board.
“I’m afraid somebody is going to come along and feel sorry for him,” Karen Sousa said of Birdsall, her sister’s killer. “He belongs in the dark. That’s where my sister is.”

As Birdsall puts on his costume just a few hours before showtime, the doily-like fabric covering his head and body (he is playing a spirit) makes him look a bit ridiculous — and he knows it.
But even in a prison culture that devours vulnerability, Birdsall doesn’t care. He lets out a huge laugh.
“Outside this room, you have to put on a front. You don’t smile or laugh,” Birdsall says of prison life. “But in here we can be the people we really are.”
He insists that the man he’s becoming is not the one who, at age 16, strangled 58-year-old Barbara Latiolais in 2012. Latiolais and her longtime boyfriend felt sorry for Birdsall’s family and allowed him to work around their house on occasion.
One afternoon, Birdsall and a friend ditched class and waited under a porch to burglarize the home. When Latiolais didn’t leave they killed her instead, strangling her with a rope and returning later to set the home on fire.
“There’s not a day that doesn’t pass that I don’t think of (her),” Birdsall said, saying he’s beginning to shed an abusive past that caused him to “stuff my feelings into a bottle.”
“The Shakespeare program helps me develop who I want to be as a man,” Birdsall said. “I’m eager for knowledge, for education. I never thought I’d say ‘I want to go to college.'” 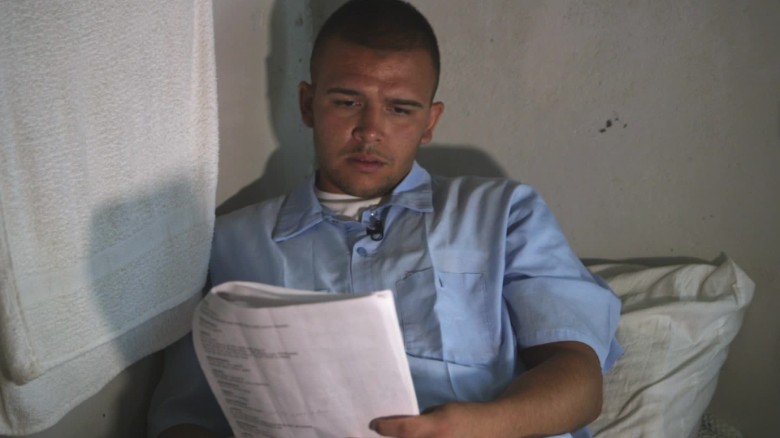 Christian Birdsall
“That’s a bunch of hogwash,” counters Sousa, Latiolais’ sister.
“He is doing this to have people look at him as if he’s changed so he will be considered for parole,” Sousa adds. “I don’t care how much yoga he takes, or Shakespeare, he’s not a man, he’s a psychopath.”
Though Birdsall was sentenced to life without parole, his age at the time of the killing allows him to seek resentencing after 15 years, opening the door for a new sentence that could allow for parole.
Birdsall and others in the Shakespeare program clearly have freedom on their minds, and they say their growth is real.
“When I do get out I’m not going out there just for me,” Birdsall said. “I’m going out there to teach the youth that you’re not alone. There are people here for you.”
That possibility is still only remote; for now, Birdsall and his fellow actors must face the only judge before them: their peers.

“The stomach is rumbling,” Pharaoh Brooks says as fellow inmates file into a gymnasium in the center of the prison. “But we’re going to kick butt, take names. That’s what we do.”
For the 19 cast members, all but one of them inmates, acting in prison is part of their life both on and off the stage.
“Whether we like it or not we have to act on these yards and we have to deal with people just to survive,” Brooks said.
For months they’ve rehearsed lines in jail cells and outside in the yard, leading to the requisite jailhouse taunting. Performance day is a chance to prove the skeptics wrong.
It doesn’t take long to convince the crowd of about 100 inmates that this is a legitimate production accomplished inside the smothering world of prison. Ninety minutes later, they rise together in their blue and gold prison uniforms in a standing ovation.
“Here! Here!” some shout, as others line up to ask questions of the pseudo-celebrity cast.
“How’d you overcome the racial barriers?” one man asks, referencing the perennial problem of racial tension in some prisons here. “We left that at the door,” he’s told.
“It’s not only changing the people involved, but the people watching it,” said Ojo, the prison lieutenant. “And the people watching it are now getting involved.”
The program will grow next year, with Gov. Jerry Brown’s budget including $4 million to expand Arts in Corrections to all 34 state prisons.
One man who sees it as money well spent is Dameion Brown, a former Solano inmate who acted in the Shakespeare program’s first year.
After 23 years in prison he was released in August and immediately pursued his acting career, landing the role of Othello on the Marin Shakespeare Company’s main stage.
“Shakespeare in prison was the point where I started to believe that a better breed of people cared about the existence of those of us incarcerated,” said Brown, who now counsels young men to keep them out of trouble and “deprive prison of its lifeblood.”
His success gives hope to current inmates like Joseph Jackson, who beams with pleasure after nailing the part of “Ariel.”
“So you want to be an actor?” he’s asked.
Jackson replies with all the confidence of a man unburdened by a life sentence.
“I am an actor,” he said.