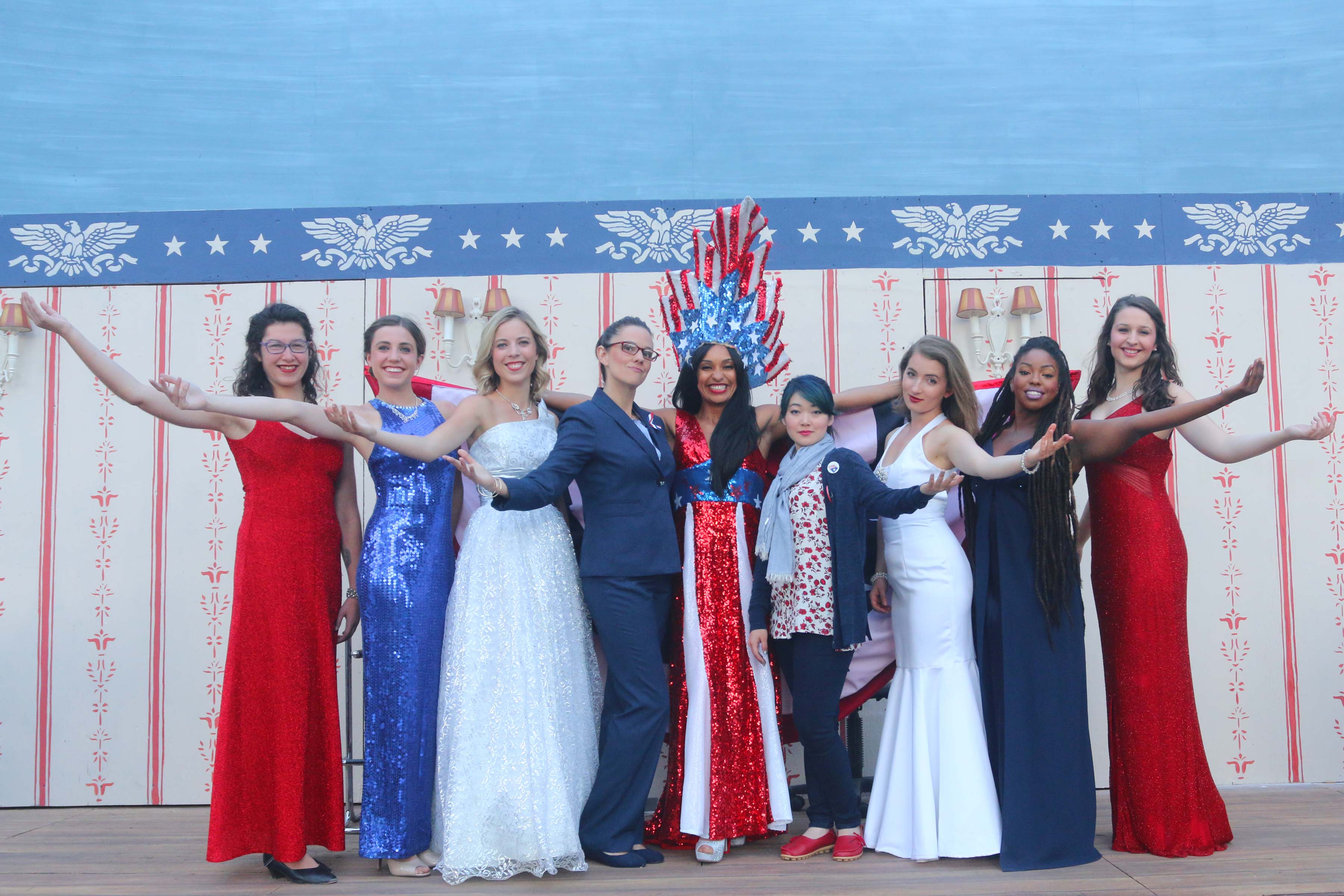 MERRITT: How did you come to costuming?

BERLIN: I got my degree in Directing, but when I was Artistic Director of a company in Chicago, I had a hard time finding costume designers, so by default I ended up costuming a lot of shows because I also had that skill. Once I moved to the Bay Area in 1998, I stuck with it. It has better hours than directing, and I like that I can work from home.

MERRITT: This is your 5th season with Marin Shakespeare—I know the first show you designed for us was 2012’s Hawaiian Midsummer Night’s Dream. Given that you usually design one show per season for the company, how did you feel about taking on THE TAMING?

BERLIN: I was super-excited to be asked to design THE TAMING because it was the one I most wanted. I do not know any other show set at the Miss America pageant, and I felt I was the best person to design this show for reasons the company didn’t even know. Another designer might have gone a more sarcastic route with the design, but I have a long history with and fondness for beauty pageants, having competed in many, many of them—maybe 25 to 30—from the age of 6 to 18. In fact, the tiara Tristan is wearing in the photo is my Junior Miss (Illinois) tiara. Love them or hate them, pageants are absolutely iconic and ingrained in the fabric of our country, so THE TAMING was a rare opportunity for me to pay unironic homage to them. I also loved that I had not only the design expertise, but the extra dramaturgical understanding of the play itself, so I was able to help the actors understand why things are done in certain ways at pageants and feel useful to the production even beyond my costume design. 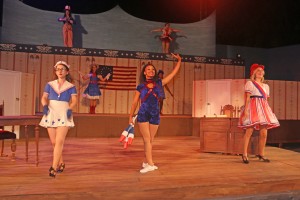 MERRITT: Nice! So, how do you costume a show about a pageant?

BERLIN: Oh, the costuming possibilities are endless because everything’s so big. I didn’t start out with a lot of deep thinking like with some other shows because it was just so clear what to do—starting with lots and lots of sequins. I started by searching on line for “patriotic fabric” and “stars and stripes fabric” and found amazing blue sequined fabric with stars and a companion red and white striped fabric, and I was already halfway there.

KATHERINE in a spot wearing an American flag dress and holding a flag or ten.

Her outfit expands or something crazy—lots of flags.

Maybe streamers or fruit sail out over her head.

Finale! Does this thing light up? That would be awesome.

KATHERINE: Is there any way I can get more flags?

BERLIN: That first American flag dress—my goal, as indicated by the script, was to include the “most flags possible.” So I covered her in bunting. My brain said, “What’s on the side of floats?” and lo and behold I discovered the whole industry of float materials online. This is often how costumes come to be, because I love browsing until I find just the right materials. Sometimes I’ll just wander fabric stores, but I’m don’t stick just to traditional materials, so you might also find me at a hardware store, or looking at floral supplies or even car parts. Part of the fun of creation is finding myself in unusual places and talking to people who work in other industries, and I love learning new skills, so taking on a new material is fun for me.

MERRITT: Let’s talk about that spectacular Eagle costume Tristan wears near the end.

BERLIN: That was inspired by Miss USA’s Miss Universe costume from last year, which was so huge, so elaborate, so over-the-top. The wings alone on that costume cost $20,000, so my job is to figure out what can we use, what can we afford that produces the same effect.

MERRITT: Exactly. And how to make it work outdoors over a 4-week run instead of just in the climate-controlled, short-run environment of a pageant. 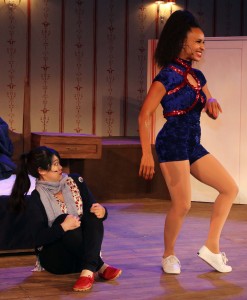 BERLIN: Yes, and actually, I like the challenges of working outdoors. For every show, I want the actors to feel great and be sure that they can move in them fine, but for outdoor theater I also need to make sure costumes can stand up to dirt, wind, and all kinds of weather. For example, those “eagle wings” are made of mylar and have an 8’ wingspan. I live in terror of a gust of wind carrying Tristan away on those—I mean it would never happen, but I worry about it anyway because it’s my job to worry about such things. But I built them forgetting about the extreme heat of the day because that final week of dress rehearsals were all in the cool of the evening. The first warm day we got, the mylar heated up not enough to hurt the actor but enough to melt the fabric glue I used to construct them, so I had to find a stronger, heat-proof glue, and now we’ll be keeping them shaded before she puts them on. But like I said, I am not content doing just the same-old, same-old—I like having to use my whole brain in my work and predicting and solving those unusual issues. That’s part of what keeps the job interesting.

MERRITT: What are you most proud of on this show?

BERLIN: Pat’s costume, actually. It’s the simplest looking one, but it was a real test to find a way for an actor to be on stage pantless yet not feel self-conscious. This isn’t a play about a woman’s butt hanging out. 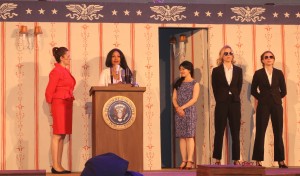 MERRITT: Katie told me she absolutely loves this costume, by the way…

BERLIN: I’m so glad. I’m very happy with how it turned out. I tried a few different things, and that costume ended up way better than what I originally planned. But this whole show has been particularly satisfying. In my 20 years of designing, I don’t know if I have ever worked with actors who were so concerned about the safety of their costumes or taken such respectful care of them. That gives me a special warm spot in my heart for these actors. I always want actors to feel comfortable in their costumes, but the fact that this cast seem to truly love them makes everything worth it. You can really see that comfort and love in their performances.