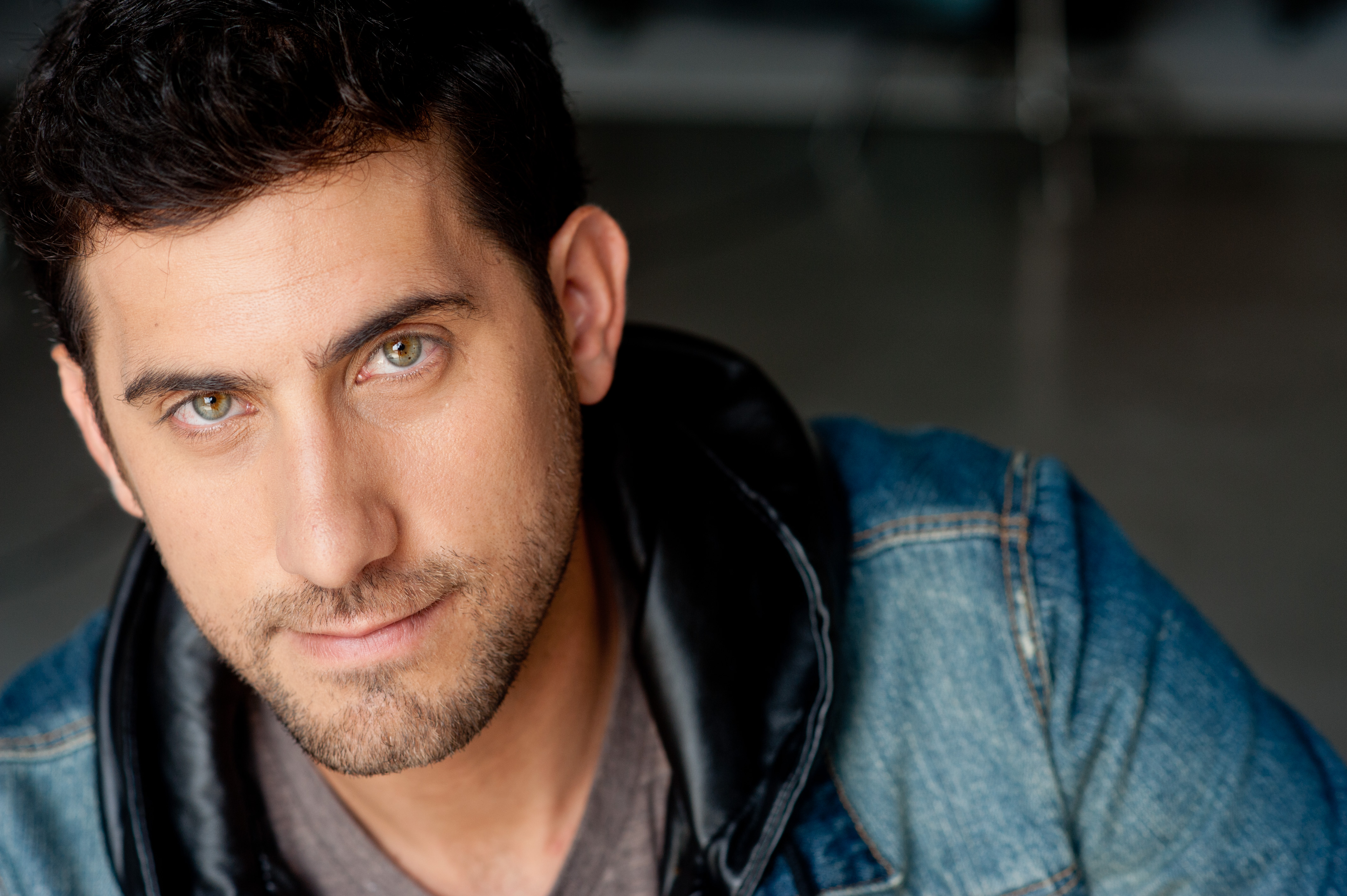 What did professional actor and Marin native, Jeff Wiesen do for his summer vacation? He came home to Marin County to play the role of Cassio in Marin Shakespeare Company’s production of Othello – and prepare for his most important role to date. In October, Wiesen will be playing the role of “first time father.”

Wiesen is married to professional actress Erica Lamkin. The couple met when they were both cast members in the 2007 Mountain Play production of Hair. 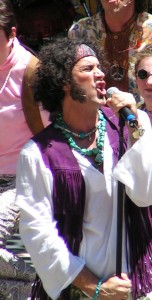 A working actor who has earned his chops and paid his dues, Wiesen has done it all from performing as a youngster in community musicals to playing significant roles in professional Shakespeare and musical theater companies. He’s worked as a theater director; a voiceover actor; a screen actor on television and in film.

Wiesen has portrayed a wide variety of characters – from an orderly on the popular soap opera All My Children to Hamlet for Will Geer Theatricum Botanicum, the professional repertory theater company in Topanga Canyon, Calif. 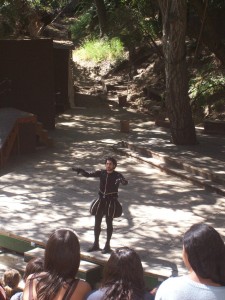 We asked Jeff Wiesen about his acting career, playing Cassio in “Othello” and his upcoming role as father.

Q: You’ve worked in Pine Valley! What role did you play in All My Children and how was that experience?

A: In All My Children I played an Orderly. It was 2011 and I had done some background work for the show, when they asked me to take a role for an episode.  It’s actually a funny story because what happens is I clumsily drop a tray full of medical equipment and while we’re cleaning it up, someone pulls the fire alarm, leading us all to start running around in chaos. Because there weren’t that many people working that day, they kept directing me to run from room to room and in different directions. While watching it, my wife got a real kick out of spotting me every time I’d run around a corner or behind the action. You can see me about nine times!  It was a fun, fast paced experience.

Q: You’re working at Forest Meadows! How is it coming back home to work at Marin Shakespeare Company?

A: It’s a warm and fuzzy feeling to be able to come back to one’s hometown to work professionally.The experience has already been very rewarding and I look forward to getting the play in front of Marin’s cultured audiences!

Q:  Talk about your role as Cassio in Othello.

A: Othello has long been my favorite of Shakespeare’s plays to read. It is so deeply psychological and centered around so many themes. It is a play about relationships, racial biases, the military, xenophobia and religion, just to name a few and there are other aspects. For Cassio, it seems to be vices that he can’t seem to control. He is smart, capable and generally liked by all, but has weaknesses which Iago will exploit. Cassio is an alcoholic and a womanizer and these character traits lead him to becoming a pawn in Iago’s game. I find the character of Cassio fascinating for his unquestioned love and respect for Othello, regardless of his otherness and in the way Cassio fits into the grand plot and scheme of Iago’s treachery. And, as Cassio I also have some amazing fight sequences and drinking songs along the way.

Q: You and your wife are expecting a baby. Congratulations! How are you preparing for the “blessed event?” 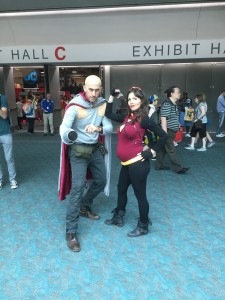 A: We are indeed expecting our first baby! October will see our family increase to three. As married working actors, the challenges are many, but we welcome the new addition and are already excited to show the baby the world. We have always been spontaneous and unafraid to go where life takes us and we fully intend to remain this way with our new little one. With communities and family in both San Francisco and Los Angeles, we hope to be able to bring the baby with us as we navigate the waters of being working artists.

Q: How did you first become involved in theater?

A: My first passionate memory is probably reading Macbeth when I was in third grade. I’ll never forget hearing bubble, bubble toil and trouble and reading about the bloody Scotsman and his wife.

I started performing in community theater around that same time and went on to do countless plays both in and out of school here in Marin. My mother was my musical director from the time I was 9-years old and she work with me on each musical I directed in the Bay Area. We have a very healthy and strong relationship and enjoy working together artistically whenever we have the opportunity.

In the past couple years I have found it unbelievably rewarding to return to this region after so many years in Los Angeles. I appeared as Captain Hook in the 2014 Mountain Play production of Peter Pan. This summer I returned to Marin to design properties for this year’s Mountain Play production and for my role as Cassio in Marin Shakespeare’s Othello. Theater is and always has been a major part of my life as an artist. 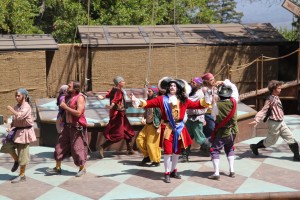 A: I was born in New York City, but my family moved to the Bay Area when I was 4-years old and most of my formative years were spent here, in San Rafael and Marin County. During rehearsals and performances for Othello, I am living in the house I grew up in, in the same room in fact. 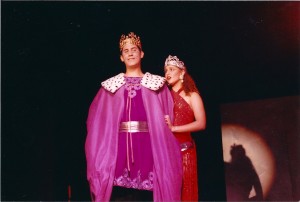 Q: Talk about pursuing your professional acting career. Is it a struggle? What was your first “professional” acting job?

A: My first professional acting job was actually a voiceover job when I was 13-years old for a CD-ROM called Rockett’s First Day of School.  I also appeared as a featured extra in the movie Jack with Robin Williams. My experience interacting with him was incredible. He was so wonderful with the multitude of us who were working with him, interacting with us between takes, “holding court” and telling us jokes. It was unbelievably inspiring and taught me a ton about how to treat people you’re working with, regardless of the size of their role.

Yes, pursing a professional acting career is a struggle. I think it is for 99% of actors leaving school. You leave a structured environment with classes and teachers and, particularly in Los Angeles, enter a world where there are literally tens of thousands of people just like you just trying to get a job. I was fortunate to have a teacher in my senior year, Joe Olivieri, who taught us Shakespeare. He devoted an entire five hour acting class one day in our senior year where he discussed nothing but what our lives were going to be like after graduation. He encouraged us to have a good survival job, stay in close touch with our friends and fellow actors from school and to keep our cars clean. That was actually one of his teaching points! He said you never know who you’re going to be giving a ride to.

My first real professional gigs were summer seasons at the Will Geer Theatricum Botanicum, where I started appearing the summer of 2001, after my Junior year at UCLA.

Q: Talk about working for the Will Geer Theatricum Botanicum. How long have you been working there? Which have been your favorite roles?

A: The Will Geer Theatricum Botanicum has been my home away from home for a long time. I have spent 15 seasons there under the oaks and sycamores. It is a true repertory company and I’ve been working with many of the same incredible actors year after year.  It is a classical theater that also produces modern works and works by other playwrights. Ellen Geer, our Artistic Director, comes from a line of activists and progressives and strives to create seasons that resonate with modern audiences and challenge us in regards to issues like equality, racism, and religion. The theater is a true family-run institution and reminds me so strongly of Marin Shakespeare.  I see so many lovely parallels. My favorite roles there would be Edgar in King Lear, Curly in Green Grow the Lilacs, Romeo in Romeo and Juliet, and most importantly Hamlet in Hamlet.

Q: What has been your biggest career triumph. What would you like to do next? Do you hope to return to directing?

A: My biggest career triumph to date has been playing the title role in Hamlet. I performed the role during the summer of 2010 at the Will Geer Theatricum Botanicum and it was an exciting, terrifying, lonely and otherworldly experience. Hamlet embodies so many complex life questions and uncertainties that exist in all of us and speaking the immortal words to audiences for months is something I will treasure for the rest of my life. I truly hope to play the role again some day.

As for what’s next, I think the great joy of being an actor is that we never really know what’s to come. I’d like to continue pursuing television and film opportunities.  This is the next “Golden Age” of television and there are so many incredible stories being told, it would be fun to be a part of some of them. And I am always open to directing. I’d welcome being able to direct another play or film if the opportunity presents itself. 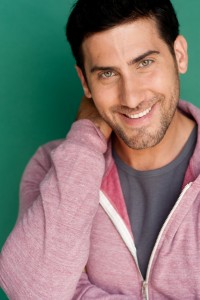