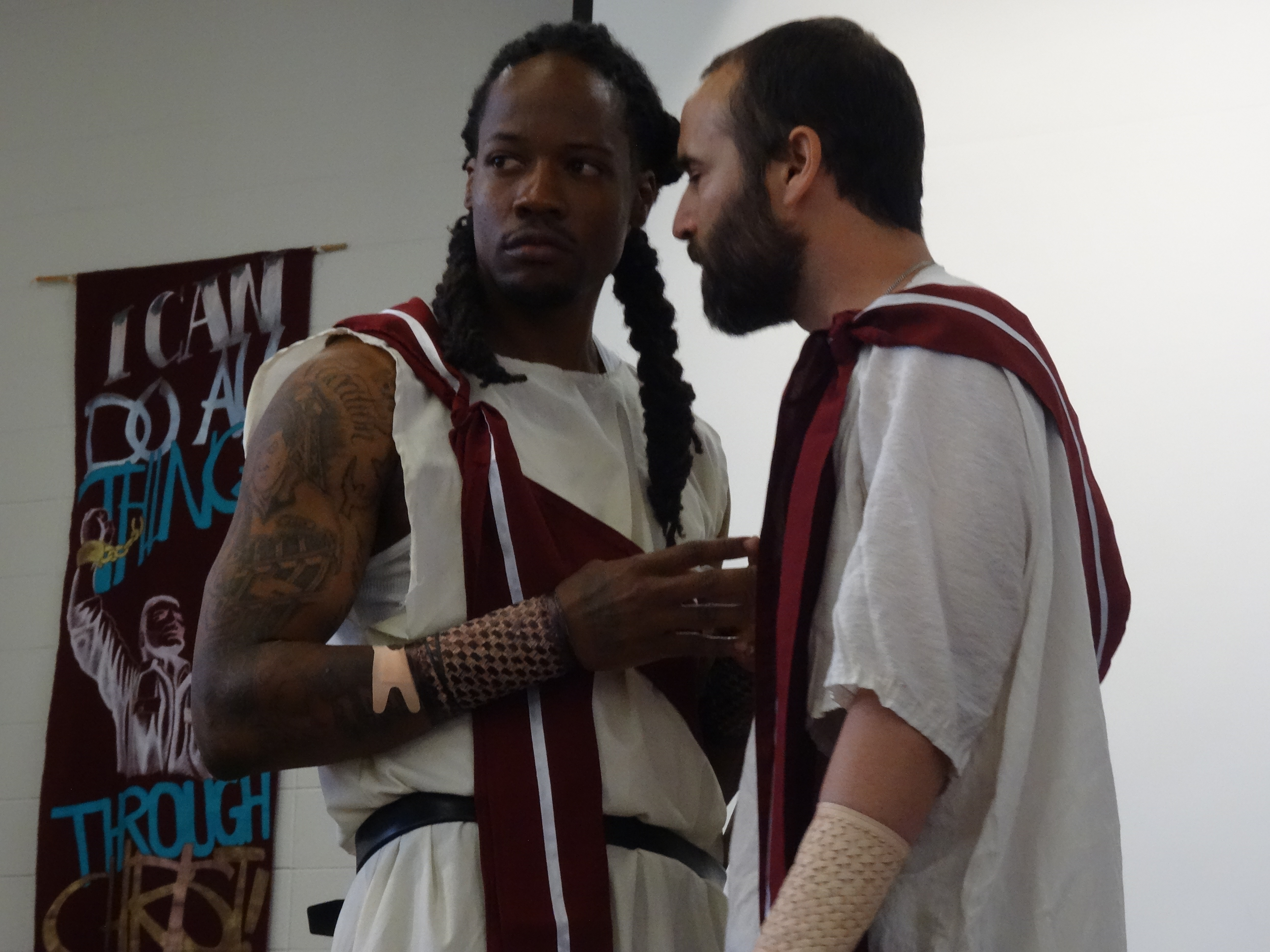 By Catherine Rucker for the Marin County Bar Association

In the summer of 2016 while serving as a volunteer attorney in the Marin Public Defender’s office, I learned that the Marin Shakespeare Company production of Othello would feature Dameion Brown in the lead. Mr. Brown had been incarcerated at Solano Prison, and he was the first actor from one of MSC’s prison arts programs to star in a regular production. When I mentioned this information to Public Defender Jose Varela, he decided to sponsor an office outing to Othello. Witnessing Mr. Brown’s wonderful performance piqued my curiosity about MSC’s social justice programs.

MSC started its first social justice program, “Shakespeare at San Quentin,” in 2003, inspired by Curt Tofteland’s prison Shakespeare program in Kentucky, which was documented in the film Shakespeare Behind Bars. The program sends a licensed drama therapist and acting coaches to train inmates to perform Shakespeare plays.

According to MSC’s Managing Director, Lesley Currier: “The State of California has recognized that arts programs have a very beneficial impact on recidivism and on prison safety. When prisoners have positive outlets for their energy, then it increases safety for prison staff members.”

Through the MSC program, inmates work on each play for about eight months. The program includes theater skill-building exercises, Shakespeare study, reflection and of course, rehearsal. MSC sees the program as a valuable tool for healing, growth and change. Inmates who participate learn to work together as a team, resolve problems creatively, express emotions, practice empathy and compassion, set goals, understand themselves and others more deeply, and achieve something which can make themselves and their families proud.

Not surprisingly, prison theater productions face numerous obstacles: limited ability to practice in the performance space, lack of access to costumes and props until the day of the performance, prison-wide lock-downs and participants being transferred to other institutions.

Ms. Currier shared how instrumental the prison staff members are to the program: “We would not be able to have any programs in the prison without staff support. There are so many logistics involved because of security issues. For example, the prison staff has to run a criminal background check on every teaching artist, volunteer, or audience member who comes into the prison—in our case, that is 300+ names each year. When we bring in costumes and props for a play, the warden has to sign off in advance every item on the list, the officers at the gate have to check in and check out every item. And the prison staff has to make sure everyone who needs it has all the paperwork.“

Between prison staff and MSC, each production requires substantial time and resources. For the first ten years of the program, despite the challenges and little funding, MSC staged several productions. Watch online. Then in 2014, the California Arts Council provided grant funding, and more grant money and donations began to flow in. According to Ms. Currier, the MSC program is now offered at eight prisons, with 24 inmates per acting group. With last November’s passage of Proposition 57—which encourages rehabilitation programs by offering sentence credits—Ms. Currier is hopeful that more prisoners and prisons will request MSC’s program.

The Shakespeare in prisons program is not MSC’s only social justice program. In addition to programs for at-risk youth, MSC launched its “Returned Citizens Acting Group” in 2015. Each year in June, six former prisoners present a theater piece. This year’s production was entitled Changes: Stories of Struggle, Hope & Growth. According to MSC, “Through sharing their life stories and perspectives on today’s world, the actors utilize their talents to build a community of support and have a positive impact on those around them.”

MSC’s regular 2017 season runs June 23 through September 24 at the Forest Meadows Amphitheater on the Dominican University campus. The productions include Much Ado About Nothing, The Three Musketeers, and Love’s Labour’s Lost. Dameion Brown will return from his triumphant portrayal of Othello to star in another lead role as Benedick in Much Ado About Nothing.

I have found that attending Marin Shakespeare performances allows me to slow down, relish the beautiful Marin outdoors, enjoy live theater, and support a worthy cause. Despite Shakespeare’s admonition in Henry VI—“The first thing we do, let’s kill all the lawyers!”—I highly recommend that my fellow Marin lawyers support the Marin Shakespeare Company’s performances and programs.