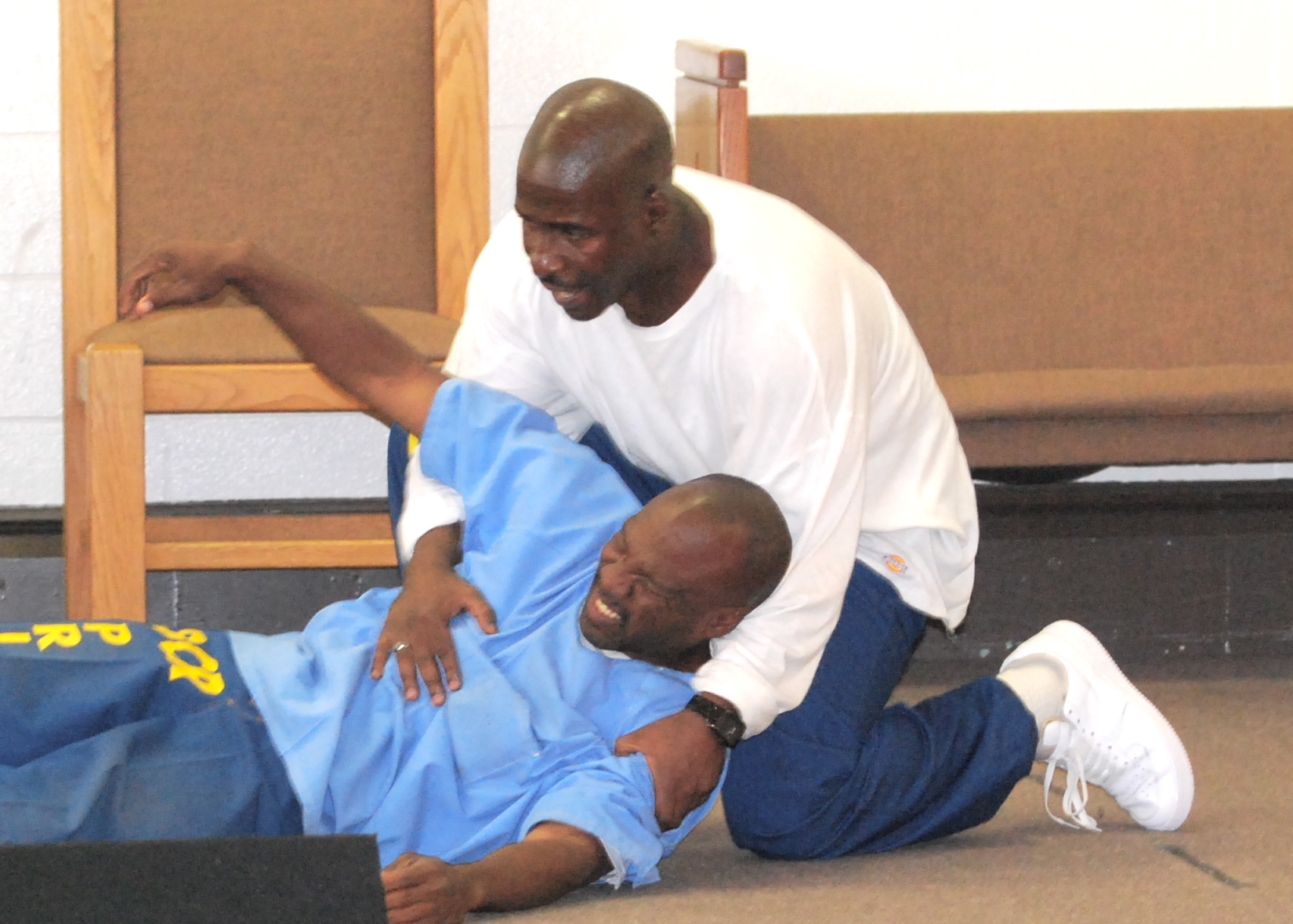 For the first time, Dominican is partnering with the Marin Shakespeare Company in their mission to bring the life-affirming practices of theater to prison.

In 1989, a small yet valiant troupe of actors imagined staging Shakespeare’s greatest works in the Forest Meadows Amphitheater on the Dominican University of California campus. They called themselves the Marin Shakespeare Company and sought to revive the spirit of the then-defunct Marin Shakespeare Festival through innovative, outdoor performances of the Bard’s plays. They succeeded. More than a decade later, the company cast their sights higher, set their goals further, and placed their hopes on the wider campus community in an effort to extend their creative reach to perhaps the last place where one might expect to encounter Shakespeare: prison. Shakespeare for Social Justice is an arts-in-corrections program that combines drama therapy with Shakespearean performance in Northern California penal institutions. Since 2003, the program has brought the healing power of literature to the men of San Quentin State Prison with all-male productions of plays including Hamlet, The Merchant of Venice, and The Merry Wives of Windsor.

For the first time, Dominican is partnering with the Marin Shakespeare Company in their mission to bring the life-affirming practices of theater to prison. Last week, students in English 3089: The Bard’s Beasts, a course offered through Dominican’s Division of Literature & Languages, joined the actors at San Quentin as they rehearsed for their upcoming performance of Measure for Measure. Just as the men prepare for weeks and weeks prior to opening night, so too did Dominican students as they readied to enter the prison. As a class, we explored issues of social justice, especially at the intersections of race, class, and gender, in plays such as King Lear, Othello, and Titus Andronicus. We then learned more about America’s incarceration system at a panel on “Policing, Prisons, and Marginalized Communities” hosted by Dominican’s Democracy & Equity Initiative. Students also received specialized training in a workshop with Lesley Currier, Managing Director of Marin Shakespeare Company. Equipped not only with a deeper knowledge and awareness of mass incarceration in California but also with more empathic approaches to community action, we were ready to encounter Shakespeare alongside the men of San Quentin.

Our morning in the prison proved transformative for all involved. After making our way through the prison’s East Gate and then through maximum security, we were led through the yard to an activity space where Dominican students first met the men of Shakespeare for Social Justice. After brief introductions (in the form of a rousing and often comedic name-game), we commenced with acting and improvisational exercises, several of which required gesture and movement. Bri Wilson, a junior dance major, reflected, “Our visit … deepened my understanding of the healing power of movement. From the first exercise onward, we used our bodies as tools for expression, reaffirming our identities and physicalizing our narratives in one of the few spaces the men had to reclaim their agency.” Senior dance major, Alisha Ragon, added, “It was amazing to see the men relax, their spines straighten, their shoulders drop, their eyes more open as the class progressed. […] It wasn’t long before I forgot I was in prison.” Maxine Patronik, a senior dance major, even took the time to instruct the men on ballet basics: “I found myself teaching some of the men the positions of ballet and helped one do an entrechat, a type of jump.”

Other activities involved communication, voicing and, above all, storytelling. Some of the men preferred the oral tradition, speaking truth to power through spoken word. Others shared their personal narratives through song, including original rap. All of the men, however, turned to Shakespeare’s plays to make contact with their emotions, to practice decision making, to collaborate and to problem-solve as a team. Senior English major, Rebecca Van Horn, observed, “Shakespeare wrote in detail about the nuances of human character and how no one is either faultless or completely evil.” As students discussed Measure for Measure with the men, they came to a fuller understanding of the Bard’s most complex characters. For Ian Crosby, a second-year student at Dominican, Shakespeare helped him “to see these men not as violent or dangerous criminals, but as the men they are.” Students learned how social justice issues in Shakespeare pertain to our local community and why theater is an effective tool for social change. Jeff Wincek, an English major, put it best: “Actors take care of each other on stage. […] We bond intimately, yet know where the boundaries lie. Actors learn empathy, how to read the subtle clues a scene partner gives.” Theater develops trust, serves as a platform for creative expression and, most importantly, enables our vulnerability to become our greatest strength.

Departing San Quentin was bittersweet with many students wanting to continue our work just a little a longer, another moment to savor these conversations and connections fostered by Shakespeare. Senior chemistry major, Alex Fuentes, realized: “[The visit to San Quentin] satisfied a need that I was not aware I even had. […] It is hard to think of a time in my life when I had been surrounded by such intense yet somehow gentle energy.” For freshman English major, Monica Barry, the most unforgettable moment was saying goodbye to the men:

“The inmates were mingling with the students as we walked to the entrance in one big group. Then, they stopped, and we kept going. They waved goodbye, smiling, telling us to have a good day and to be their voice in society. They turned and walked away, deeper into the prison, as we walked to the entrance, able to leave. I will never forget watching them walk away together, talking and joking around. We were allowed to come and go so easily, yet that moment reminded me that they weren’t just there for a class. The prison is their home, and they cannot leave freely.”

The hope is that next spring 2018, in collaboration with the Service-Learning Program, we will be able to offer this class as a full fledged partnership, bringing students to work regularly with the men on the inside as they prepare their spring production. Clearly we have much to learn from each other about the empowerment and redemption found in the performative arts.

To learn more about Shakespeare for Social Justice go to www.marinshakespeare.org.