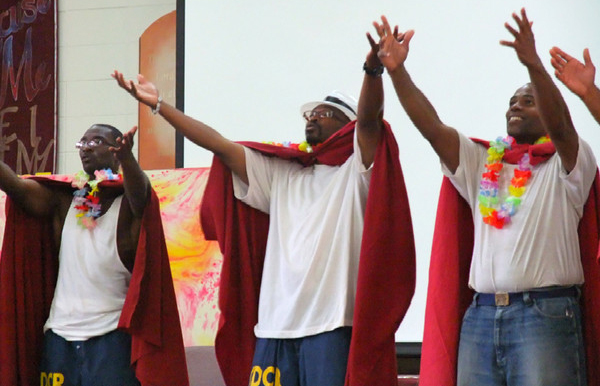 The stage is set. The actors put the final touches on their costumes and wait nervously in the wings. The audience is ushered in by an armed guard or two. It’s showtime.

This is not an ordinary production of Shakespeare’s “Julius Caesar.”  This is Shakespeare at San Quentin State Prison.

Since 2003, actors and staff from the Marin Shakespeare Company have taught classes at San Quentin, the state prison just a few miles away.

The company has always boasted a rich social outreach program to get Shakespeare’s work out to as many people as possible. The prison population was nearby, and managing director Lesley Currie said they seemed like a logical fit for courses. So she and her team decided to give it a try.

“At first it was very poorly attended, but after a few years, we had enough men in the class to actually put on a full-length Shakespeare play in the prison chapel,” Currier said in a phone interview. “And since then, it’s just taken off.”

After their first full-length production, interest in the classes skyrocketed. These days, Currier sometimes manages a waitlist or two.

The sessions don’t just focus on Shakespeare. Through exercises and activities, they also cover conflict resolution and positive decision making.

The classes are team taught, and local actors and directors often volunteer their time too. In addition to acting, the courses include lessons in self-reflection and teamwork. With the help of drama therapy students, the classes can also go a little deeper, allowing the inmates to work on their social skills.

She often ends each class with what she calls, “group decision-making exercises.” These creative assignments might ask participants to work as a team to turn lines from a play into a song and dance or a poem; or have them rewrite certain scenes, forcing characters to make a different choice.

But as with the bard himself said, the play’s the thing.

Since the early days of the program, the participants have put on more than a dozen full-length Shakespeare plays at San Quentin. The inmate actors work for months putting each show together. Memorizing lines, building sets, and getting into character is tough work, and the actors take their roles very seriously.

Because, for them, it’s not just something to do, it’s a point of pride and a place for self-expression.

“One man said, ‘I’ve been in prison for 12 years, I have a 12-year-old daughter, and all she’s ever known about me is that I’m in prison. And today she gets to know that I’m a Shakespeare star.”

The inmates’ families aren’t allowed into the facility to see the productions (the audience is mostly made up of other inmates), but each performance is recorded and put online so families can see their stars in action whenever they want.

Support from the state has allowed the program to expand to two more correctional facilities too.

“Three years ago the state actually started funding arts in corrections, and we were one of the first seven organizations in the state of California to get a grant,” Currier said.

The grant allowed the program to expand to inmates at Solano State Prison in Vacaville, where inmates are working on “Hamlet” and “King John.” And the Folsom Women’s Facility, about 25 miles east of Sacramento, where they’re working on “Taming of the Shrew.”

The expansion gives more inmates a chance to take advantage of this powerful program.

“When you hear the men talk about why they do it and why it’s important to them [the men and the women now] it just makes you realize, just more deeply what it means to be a human being on this planet,” Currier said.

But the best part? It’s really having a positive effect on the participants.

Programs like this are a win for everyone involved, and that’s why California and other states continue to make the investment.

“Research has shown that structured arts programs improve inmates’ problem-solving skills and self-discipline and increase their patience and their ability to work with others,” said California Department of Corrections and Rehabilitation (CDCR) Secretary Jeff Beard in a written statement. “These programs also direct inmates’ energy in a positive direction, promote positive social interaction and lower tension levels, resulting in a safer environment for inmates and staff.”

An inmate watches the performance. The audience is limited to inmates and select outside guests. Photo by Justin Sullivan/Getty Images.

Most importantly, for the actors and their teachers, these programs can be life-changing.

“Most California state prisons have versions of 12-step programs … and most have some kind of education program where you can get your GED or do college coursework, and those are really important,” Currier said. “But the arts are really important as well. Being able to engage with other people through the arts — that’s a different kind of social learning than you can get writing an essay.”

Whether it’s “Hamlet,” “Julius Caesar,” or “Taming of the Shrew,” it turns out that some of the best shows in California are behind lock and key.

They’re full of heart, passion, and pride. The actors’ performances transport the audience to worlds previously unimagined, even if just for a few hours. And when you’re living in a restrictive environment, that’s a beautiful, life-changing gift.