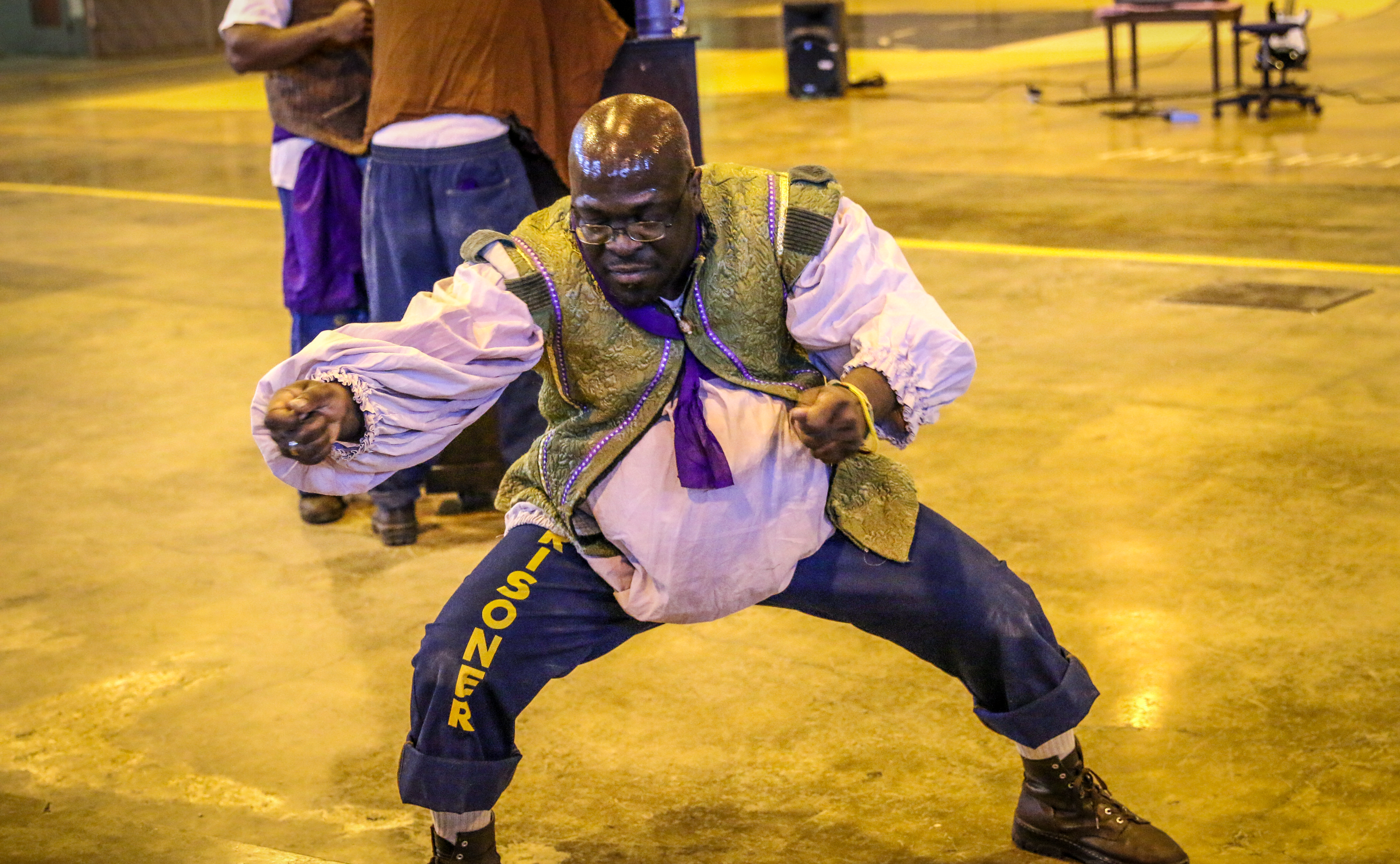 The 400-year-old words of William Shakespeare came to life at Deuel Vocational Institution on Sunday when a small group of inmates performed “Henry IV, Part One.”

The performance — a first for the prison near Tracy — was part of the state’s Arts in Corrections program, which enabled 16 inmates to make their stage debut under the tutelage of Marin Shakespeare Company performers Kimberly Taylor and Pamela Kaplan.

They underwent three months of training led by members of the company, which began producing prison theater programs in 2003 at San Quentin State Prison. Over the years, the group has expanded to seven other prisons, including DVI this year, said Lesley Currier, the managing director of the theater company.

“California is leading the nation in rehabilitation programs, and we are teaching them that they are human, creative individuals in touch with their own creativity — that they can do anything,” she said.

“None of them came to the prison thinking they are going to do Shakespeare,” she said with a smile as she watched the cast members prepare before going on stage in the prison gymnasium Sunday morning. “This group is really wonderful. It’s a really diverse group.”

To get ready, the performers met for two and a half hours each Saturday for three months to learn basic dramatic techniques, stage their scenes and learn their lines. Currier said her group chose “Henry IV, Part One” because of the story it tells about fathers and sons and making the right choices.

The play follows King Henry IV of England, the rebels who are plotting to seize his throne, and Prince Henry, his son and heir, who spends his time drinking with a gang of criminals rather than learning to rule the kingdom.

Although for most it was their first time acting on stage, the cast members did their best to stay in character and deliver Shakespeare’s words. Over their prison clothing, they wore costumes supplied by the Marin Shakespeare Company, and in place of the stage weapons commonly used in the play’s battle scenes, they improvised and swung imaginary swords at each other, never making contact.

A spokeswoman for the California Department of Corrections and Rehabilitation, Kristina Khokhobashvili, said there are 1,000 inmates taking part in Arts in Corrections programs out of a statewide prison population of 130,500. The programs include theater, music and drawing.

“All these programs are integrated,” she said. “This is their first live performance. It’s hard work. It’s Shakespeare — real Shakespeare.”

Sunday’s show lasted a little over an hour, and at the end, each inmate received a certificate of excellence and answered questions from the audience — mostly other inmates — about their experience. Many of the performers said it took them out of their comfort zone, but all of them agreed they would do it again.

No stranger to the program was inmate Kelon Williams, who portrayed the comical character of Jack Falstaff, the roguish leader of Prince Henry’s friends. He said he had the chance to work with the Marin Shakespeare Company once before, playing one of the fairies in a production of “A Midsummer Night’s Dream” at California State Prison Solano in Vacaville.

“I learned I have options,” he said. “You forget there is so much more that I can do in my community. I get to come out here, hang out and relax — live life. I messed up what life I have, and I now have a purpose.”

Williams said he and the other inmates in the cast supported each other and made it a fun experience.

“We’re men and we need to work with each other to get out of prison,” he said. “We can use our imagination in problem solving. It’s hard for men to be supportive of other men.”

Playing the part of King Henry IV was John Charles Curtis, who said he would recommend the program to other inmates. He said he applied to take part when he was at San Quentin before being moved to DVI, but he never got the chance.

“As a kid, I wanted to be an actor,” he said. “I told them I would help wherever I was needed. I always wanted to be king. I got into character, but it was hard remembering my lines.”

Mark Morales, who played the role of Prince John, said he enjoyed learning something new and working with an ensemble. He said the opportunity to work under the direction of women was something that could help the inmates after their release from prison.

“I wanted to understand Shakespeare and get over my shyness,” he said. “We learned to work together, out of our comfort zone.”

Morales said that although people might think of prison as a cultural wasteland, it’s important for prisoners to know that high art, such as theater, opera and ballet, is not out of their reach.

DVI houses about 2,200 men, including general-population inmates serving their sentences there and new inmates going through its Reception Center before being assigned to another state prison. Some participate in academic or vocational education programs or have jobs at the prison dairy off Kasson Road.