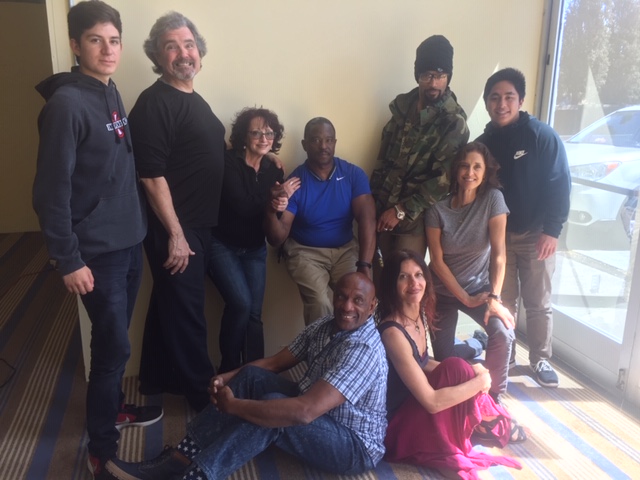 Dori Eisenhauer interviewed Suraya Keating, Marin Shakespeare Company’s Shakespeare for Social Justice Director, on April 18, 2019. Suraya shared some of her background and inspiration for her work teaching Shakespeare in Prison and with the Returned Citizens Theatre Troupe. 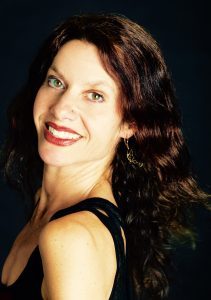 Dori:  You’ve just celebrated a milestone with Marin Shakespeare Company! How long have you been working with us?

Dori: Could you tell me about your background?

Suraya: I have a dual background in theatre and psychology and I am also a registered Drama Therapist.  I studied in various places, but some of the most key places I got training were the California Institute of Integral Studies where I got one of my Masters degrees.  I also studied at the Living Arts Counseling Center with Armand Volkas.  He was my trainer when I became a registered Drama Therapist.  I also happen to be an Expressive Arts Therapist but in the context of the work I do with Marin Shakespeare Company, it’s really my Drama Therapy background that comes into play most often and most concretely.

Dori: How did you connect with Marin Shakespeare Company?

Suraya:  Well, I had been working in schools for a long time both as a teaching artist and also in other contexts as a Drama Therapist.  Somehow through that work, I was linked up to work in a county jail in a program called THEATRE FOR CHANGE, a program which used theatre to help men look at ways that males get conditioned to be violent and aggressive.  At the same time, I was doing an internship and then acting with Marin Shakespeare Company, and they had an opening in their San Quentin program, so that’s what led me into working with them.  I was also getting more interested in Shakespeare. I had studied with Shakespeare and Company in Lenox, MA, and starting to develop a passion for Shakespeare. It was my experience seeing the transformative power of theatre, in particular, (but really all of the arts) in how it was helping the youth I was working with, so I got interested in seeing how it might be helpful working with the incarcerated population. 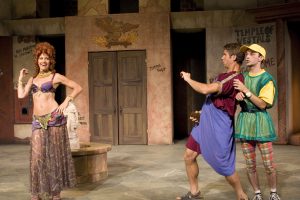 Suraya Keating as the Courtesan in “The Comedy of Errors” at Marin Shakespeare Company, 2006.

Dori: What was your first teaching experience with Marin Shakespeare Company?

Suraya: I first began working in San Quentin State Prison.  It was with a very small group of maybe 6 or 7 individuals who were a part of the Shakespeare Program.  I think they had been going for about two years at that point. I was immediately drawn in.  I was touched by the gratitude of the people I worked with, of their passion for learning, and also by their talent and eagerness to share and contribute.  It was a very positive initial group.  Also, there was a sense that we were doing something different and important.  There was a feeling of excitement about that!

Dori: How did the program grow from then to what you see now?

Suraya:  Good question! Before I answer that, I just want to pay homage to Jonathan Gonzalez who was the first MSC staff member to work in San Quentin State Prison before I did.  He, along with Lesley Currier, really started the program before Johnathan moved away to get his MFA.  I offer a big thanks to Jonathan and Lesley. The program evolved over the years; after a few years of showcase performances of scenes and sonnets, we put on our first full-length Shakespeare show which was Much Ado About Nothing. We brought in actresses to play the women’s roles (at that time, none of the men wanted to do women’s roles, but that’s changed now).  At the same time, I was very enchanted by what’s called “Self-Revelatory Theatre”, or in broader terms, theatre inspired by our life experiences.  I suggested we bring that in as element to incorporate into the Shakespeare Program as an opportunity for the participants to write theatre based on their life experiences.  In order to tie it to Shakespeare, we used the Shakespeare plays we were doing to inspire personal writing around experiences we’d been through.  A recent example is our study of the play, King Lear, where we explored issues of family conflict, greed, betrayal in our own lives, as well as love and forgiveness.  We wrote about these issues and gave voice to our own experiences specifically inspired by the themes from the Shakespeare plays.  At San Quentin, the program blossomed into a two-part program where we put on a Shakespeare play every year (we now perform two Shakespeare plays by two groups). In addition, we also have what we call a parallel play program, where people write and perform original theatre inspired by Shakespeare’s themes and then perform their own stories.  We now have many more programs including a Veteran’s group program, run by our staff members Tina Rutsch and Lesley Currier at San Quentin. There is also Wednesday night Beginning Acting group we recently added. And that’s just at San Quentin – the program is in 12 other California State Prisons as well. 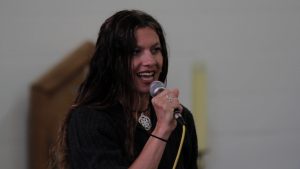 Dori: What kind of exercises do you use in your teaching and why? 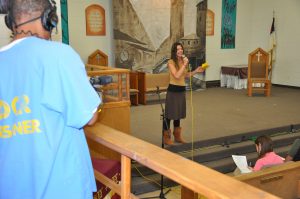 Dori: What changes and transformation do you see?

Suraya:  The most common things I see are people feeling a sense of inner confidence and excitement that they have abilities and are celebrated for those abilities — that they can act, they can share their life story, and it can be a gift rather than a curse to share their life story.  They get to feel more connected and more like part of a group they belong to and are cared for by.  I think the big thing is they get to feel like they can be their authentic self and share themselves, and connect across differences.

Dori:  Do you see transformation in a short period of time?

Suraya:  Oh yes, some people come into our group and have never really played before or played in a theatre class. They become enchanted by the power of play. It’s a joy to see a how quickly people open up to the power of play.

Dori: You taught our Artist in Residence, Maverick Harrison, while he was still incarcerated at San Quentin.  What was your experience teaching Maverick in prison and how are you working together now?

Suraya:  I taught Maverick for five years at San Quentin.  Maverick was definitely one of the leaders and role models in our San Quentin group.  He was very looked up to by the people in that group, especially by the newcomers. He and I are now collaborating on the Returned Citizens Theatre Troupe production. Maverick is our Musical Director.  We are part of this amazing, very talented group of people creating original theatre inspired by life experiences. 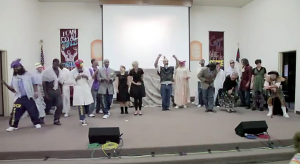 Dori: Could you tell me more about the Returned Citizens Theatre Troupe?

Suraya:  The Returned Citizens Theatre Troupe grew out of another vision I had. As people began to get released from prison more and more, I proposed the idea of having a place on the outside where these people could go and co-create theatre and community together.  In the same way community was happening inside the prison, we wanted to create the same space on the outside, and that’s how the RCTT started in 2016.  Lesley found funding and space for the program, and now we’ll be touring for the first time as well – taking this year’s performance to at-risk youth and into San Francisco to perform for recently released Returned Citizens.

Dori: How do you start your creative process for generating a production with RCTT? 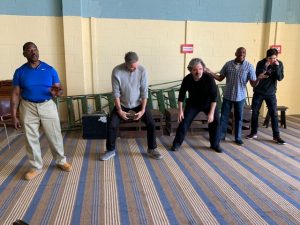 Dori: It sounds very therapeutic, as well as theatrically creative.

Suraya: That’s the intention.  This year, since we are touring youth facilities, we wanted to lean into our youth experiences, so I invited the RCTT in exercises looking at memories of youth. We investigated the things they liked about being young and the things that were hard, again using sculpting and other techniques to bring them into embodiment. We are also using our writing inspired by this work.

Dori: How have your students transformed you?

S:  They’ve transformed me in so many ways.  One thing I am continually inspired by or transformed by in the work in prison is the level of personal reflection and introspection, and desire to really contribute.  There is also an invitation to be present with people, one-on-one, live, in a way that I think is increasingly getting lost in our ever-so-faster world of technology where everybody is locked into their cell phones rather than to someone else’s presence, so that also touches me.  I am inspired by the courage of people sharing their stories, themselves, and their love and pain that touches me and gives me hope for humanity.

Returned Citizens Theatre Troupe will perform their 2019 production, Breaking Through on May 31 and June 1, 2019 at 514 Fourth Street in San Rafael, and on Saturday June 15 at the University of San Franciso..  Tickets are free, donations are accepted, and space is limited.  To reserve your ticket, visit: https://www.marinshakespeare.org/returned-citizens-theatre-troupe 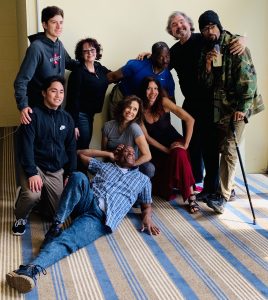