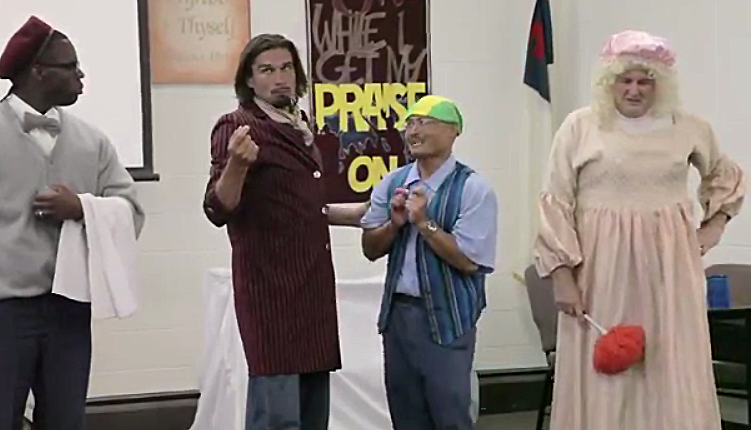 Daphne Masque attended a performance of Two Gentlemen of Verona at San Quentin State Prison on May 24, 2019.  Here’s what she wrote about her experience:

Welcome to The Front Row!

I’m going to tell you about a production I saw at San Quentin produced and directed by Marin Shakespeare Company. I had a better time than anticipated. It won’t take long but what I’ve got to tell you might be surprising. It surprised me.

Before I tell you about the unexpectedly delightful, charming, and playful production of “Two Gentlemen from Verona”, I want to mention a couple of things about Shakespeare.

Before I tell you about how surprisingly friendly, smiling, kind, and courteous the cast and crew were with the audience and each other, I want to tell you something of how the practice of theatre can heal deep scars.

Before I tell you about the difficulty of being inside the Big House — clanging gates, stern guards, metal detectors, list of warnings, cement, cement, cement, a few flowers, and chain-link fencing — first I want to tell you a bit about the funding for the program and how it’s happening all over the US.

You would be right to question why the heck Shakespeare is being performed in prisons all over the US? What good could possibly come of that?

Shakespeare’s plays  build a spiderweb of complex character motivations, deceptive plots, mystery, intrigue, crime, and comedy that all intersects with the human failings of greed, power, and lust. Something criminals  know a little bit  about. Shakespeare, while writing over four hundred years ago, was grappling with the same powerful, emotional psychological issues that we struggle with today.  His works will always be timely, because all the characters and plots are informed by the inescapable , universal foibles of human nature. I for one am deeply grateful.

I was reminded of being in high school drama class, and my teacher assigning “Romeo & Juliet” to read. In my opinion, he was out of his mind. I was stupefied at the language and knew nothing about rhyming couplets or iambic pentameter. Nor did I care to know anything about dead literary styles of writing. I wanted to do modern work, plays I could easily understand, and plots that were within my psychological reach.

I remember my class talked for a long time about “Romeo & Juliet”; about the characters, the setting, about social economic backgrounds, about love,  lust,  betrayal,  familial bonds, about stubbornness and so much more. I grew to understand about love because my teacher was able to breakdown the language so that the character motivations related to my life. My fifteen-year-old heartfelt crush burned in me like Juliet’s passion for Romeo. I understood the turf wars between the Capulets and Montagues was the same as gang violence in East LA. Once the language was pulled out of  obscurity and tamed enough to understand character motivation, the rest fell into place. As it does for those men in prison.

Marin Shakespeare does the same thing for the inmates at thirteen different prisons in California, that my high school teacher did for me. Except in their case, the need is more urgent and timely. As stated by Lesley Currier, one of the founders who developed the program for Marin Shakespeare Theatre Company, “Over 95% of the incarcerated prisoners will go home one day, and shouldn’t we at least send them home with some Shakespeare under their belt?”

The most poignant part of the day was when the cast and crew were allowed to answer questions for the audience. Mind you, it was only for a few minutes before they went back to their inside life, that we were able to peer behind the veil and hear the valuable self-effacing insights gained by the inmates.

One cast member profoundly admitted, “I lost my humanity in 1985 in Nicaragua, and for the last six years Shakespeare as helped me to find my humanity again.”  This one statement gave me a world of information about how important the impact of Theatre and Shakespeare has had on this inmate’s view of himself and his life choices. Others on the stage nodded.

We were not told about the crimes the inmates had committed, nor the length of their stay, or the daily trials of being incarcerated. But we were told some specifics about the program. They rehearse one day a week for two and half hours. It takes months to prepare to do one performance. Families and friends of the cast and crew are not allowed to see a production. The funding for the program comes from grants, individual donations, and the theatre company.

On the drive home from the performance, I realized that neither I nor my companion felt one moment of fear, threat, or discomfort. I’m serious when I tell you we were charmed by the inmates. Their respect for each other surprised me, the “pleases and thank yous” were genuine, the enthusiasm for the performance was real, and the commitment and benefits for the program were palpable.

If you’re interested in more info, be sure to Google it. There’s a number of programs all over the country; Detroit, MI, Macatawa, MN, San Diego, CA, and Indiana to name a few. There are books to read, an NPR interview, a documentary, and even a Facebook page.

If you know of a theatre program where a company is doing some healing work, I’d love to hear about it. I can be found on Facebook @Daphne Masque Backstage Romance & Twitter @DaphneMasque.