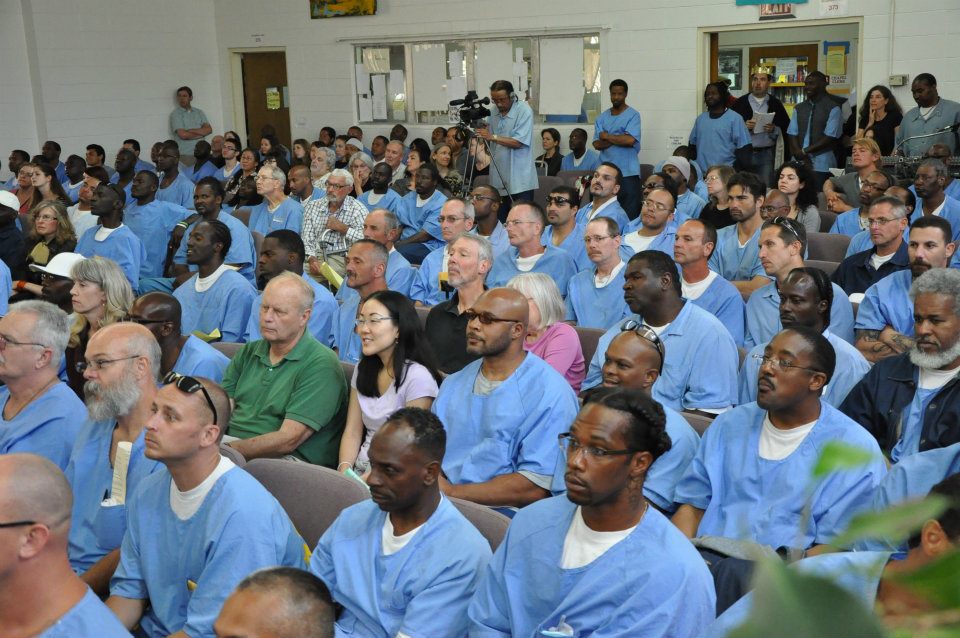 As the opportunity to share approaches on GIVING TUESDAY this December 3, I had the chance to take a few moments to speak with Diane and Larry Rosenberger, Co-Chair of the Marin Shakespeare Company Capital Campaign “Setting the Stage For Good”.  Longtime Marin residents, they have also been audience members at our productions at Forest Meadows Amphitheatre for over two decades.  Larry and Diane offer keen perspective on the impact of our Shakespeare in Prison program, and being neighbors to the very first facility where we launched the program, San Quentin State Prison. Both were impressed by a performance of HAMLET at San Quentin, which was the first of many Shakespeare in Prison performances they have attended. As you will discover, it was a game-changer for everyone involved, and both Larry and Diane have some powerful (and warm) thoughts to share about their impressions of Marin Shakespeare Company’s work onstage and in prison.

Dori: What attracted you and inspired you to become involved with Marin Shakespeare Company?

Larry: From my point of view, we were drawn to the three-fold purpose of MSC: the performances onstage, educational offerings, and the Social Justice programs.  All three of those chimes ring for us, but probably, where we have the most passion is about the Social Justice.

Dori: Why is that?

Larry:  We saw HAMLET in San Quentin approximately a decade ago.  Since then, we have gone into the prison about four or five times a year.  In part, we have gone in to see MSC’s Shakespeare in Prison performances but also as part of another program, the Prison University Project.  When we saw HAMLET in the prison chapel, the talk-back with all the actors after the play detailed what this program meant to them.  Diane and I both simultaneously came up with the phrase: this is a “game-changer” for them.

Diane: —and for their families.  As I think on this, I imagine (and have read) of the multi-generational situation affecting the whole family; when someone is in prison, the rest of the family – the children – tend to think “I’m not very good, and that’s where I will end up, too”.  The Shakespeare in Prison program is a way for someone who made a mistake and ended up incarcerated to do something that’s really worthwhile.  It demonstrates a positive influence on their kids and maybe even grandkids.

Dori: It shows that they matter, that they have value, and that they are important. 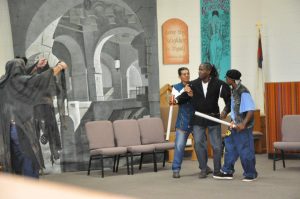 Diane:  Yes. This is just part of the package of importance that we see with Marin Shakespeare Company. In our work with The Capital Campaign, the emphasis includes the upgrades at Forest Meadows and renovations at 514 Fourth Street.  Forest Meadows will get some aging population adaptations like handrails and other changes there, which are important; I am glad to see that as part of the package.  Looking at the 514 Fourth Street space, we see it as an anchor for East San Rafael as part of the cultural district.  While there are many performance stages in the district, I think it will be great to have a new performance space there for Marin Shakespeare Company; I am very excited to see a space for ALL the MSC endeavors.  The new building will house administrative offices (formerly all based out of the Currier’s home for 30 years), with educational classrooms, and multi-purpose usage.  I think it is a good place!  We live in the San Quentin area, but I look forward to thinking about maybe living in downtown San Rafael, where it will be great to be in walking distance to the Marin Shakespeare Company downtown location.

Dori: Yes!  We are looking forward to having our offices and performance space there, as well as the classrooms, Box Office, Social Justice Center and costume/prop shop upstairs.  We will be opening the space during the Art Walk on December 13, 2019 from 5-8 pm. Visitors will be welcome to stop by the space and get a sense of the vision of what we will bring to the arts community, especially our social justice programs that you have called a “game changer”.  Would you talk a bit more about what you mean by “game-changer”?

Larry: A “game-changer” affects both the people in the prison who participate in the program, but also changes an entire culture of a prison (as we saw also in Solano). It’s a wonderful and believable story, which has taken this program from one prison to two prisons to thirteen (as of now). It works.  It changes not only the people who participate, but also the other people in the whole prison culture, so that’s pretty powerful stuff.

Dori:  You had mentioned that it’s game changing for the families as well, seeing value added to multiple lives, is very potent and creates a lasting and moving impression.  On a closing note, do you have any other powerful memories of Marin Shakespeare, or any other significant events that stand out in your mind?

Diane:  The warmest memories include being there with family and friends and sharing the experience in the outdoor theatre that got us going and kept us coming back.  Our fond memories include taking our kids there to see plays, too.

Larry:  My memory includes the sharp instance when we went to San Quentin the first time and we watched HAMLET, and I walked in expecting it to be pretty bad.  I had very low expectations.  Luke, who was HAMLET, was astonishingly good, so that’s one part of my strongest impression.  After HAMLET was over, the actors formed a semi-circle on the stage in the chapel for Q & A with the audience. They were asked “What does this program mean to me personally”? and that was the eye opener from my point of view.  I don’t think I am going to forget that moment, because they were about a third of the way around the stage in that semi-circle as each individual was answering the question.  That’s when Diane and I looked at each other, and maybe one or both of us just mouthed the phrase “game-changer”, so that’s my sharpest memory.

Another lasting memory I have includes attendance at Lesley’s San Quentin workshop about one year ago.  We also had friends go and take in the program which involved going through acting exercises with the incarcerated actors. In that workshop, there were, perhaps, three high school girls and I recall I watched them reacting to what they were experiencing. There was also an exercise I had never expected to make a difference, which involved pairing up one person in blue with one person from the outside.  As part of the exercise, you got close to this partner, and you looked into their eyes for a full minute.  You don’t know how long a minute is until you do that.  We all did this exercise, and this is a strong and lasting memory.  Furthermore, our friends who attended with us immediately commented “this changes lives”.  It was a similar observation to ours.  They really, in some ways, triangulated the perspective; it is not just us seeing what we want to see, other people can see the same things.

Dori:  That’s amazing.  Theatre really is a tool to offer an understanding and perspective that is truly very powerful.

Diane:  I am nodding my head.

Dori:  …And I am grateful for your time and support!

Thank you to both Diane and Larry, for experiencing and sharing the “game-changer”. 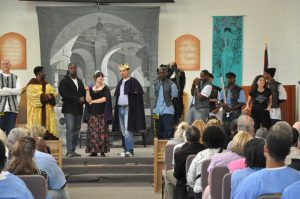