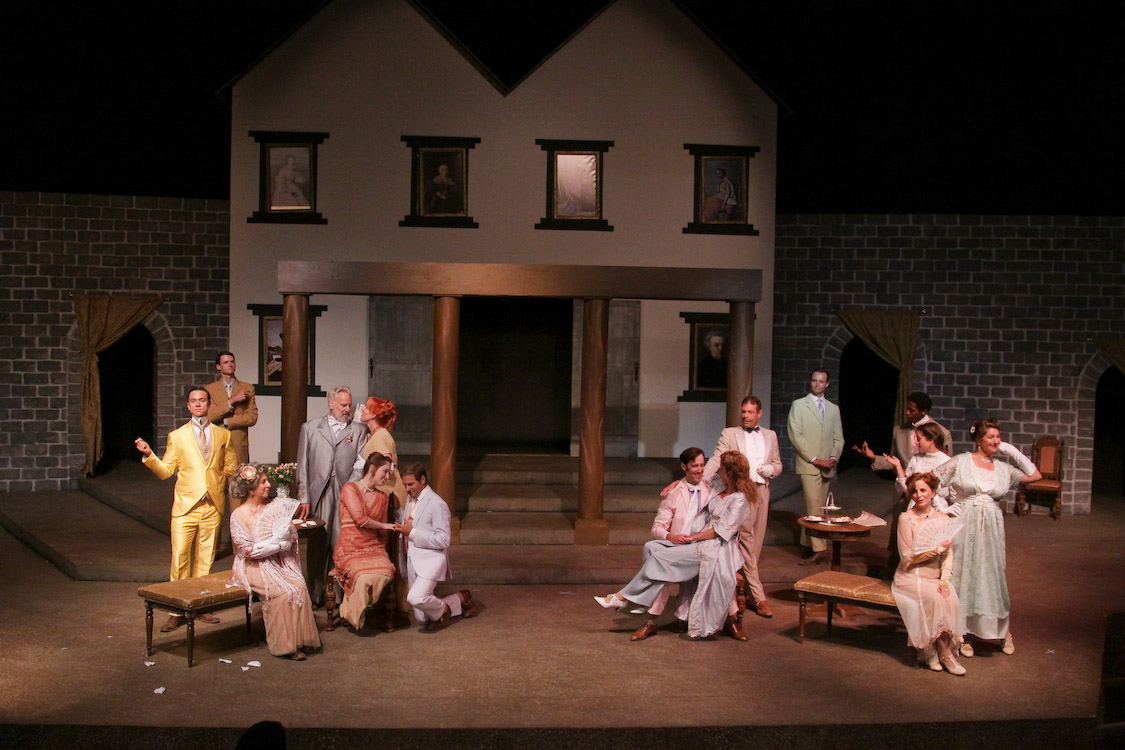 An Ideal Husband
by Oscar Wilde
Directed by Robert Currier

We chose this play to showcase some of our favorite actors:  Darren Bridgett, Cat Thompson and Marcia Pizzo.  Around them, Robert Currier assembled a flawless cast, headed by Nick Sholley, Julian Lopez-Morillas and newcomer Kate McGrath.

Audiences and critics alike raved about the production, which featured Abra Berman’s pastel costumes.  It was, simply, delicious.

This Oscar Wilde political thriller is meatier than his best-known play THE IMPORTANCE OF BEING EARNEST.  It was exciting to see a slightly different side of Wilde – although his well-loved wit and wisdom and unconventional morals shine through AN IDEAL HUSBAND.

Bob Currier called the production “perfect” — and lots of other people agreed!

On Valentine’s Day in 1895 An Ideal Husband was enjoying a popular run in London, along with Lady Windermere’s Fan when The Importance of Being Earnest opened – three hit shows running simultaneously put Oscar Wilde at the pinacle of professional success.

And yet within a matter of weeks, Wilde was on trial, convicted for “corrupting youth” and sentenced to Reading Gaol, doing hard labor which caused a fall that hastened his death on November 30, 1900 at the age of 46. Poor, dear Oscar!  Perhaps the greatest raconteur and wit of all time, brought down by scandal.  Though married to Constance Wilde, the mother of his two sons, Wilde was obsessed with a young nobleman Lord Alfred “Bosie” Douglas and condemned for “the love which dares not speak its name,” something London society at that time could not abide.

Prophetically, in An Ideal Husband, Wilde explores a successful public figure about to be exposed with a scandal that threatens his fortune, career and marriage. Wilde had seen his father, a successful surgeon knighted for his contributions to society, withdraw from public activity after being accused of seducing a patient. Today, successful politicians and public figures continue to be caught up in scandals. Some people weather scandal and continue to be accepted by society and others are utterly destroyed. As onlookers, we all know we have ourselves sometimes bent the rules, and sometimes we can forgive others for what we recognize as common human frailty. Sometimes we cannot, and cling to established ideals of behavior. Our moral compass is challenged by scandal.

Wilde’s moral compass was decidedly haywire, as he explores in An Ideal Husband, much to our delight. Please enjoy the sadly ironic and surprisingly contemporary wicked wit of the mystery that is An Ideal Husband and Oscar Wilde.

“A fun evening out, or thought-provoking commentary on the human condition, but either way it is a night that is difficult to forget.”
– Alexa Chipman, Theatre Blogger

“Stylishly decked out in brightly colored suits and fanciful gowns by Abra Berman, Marin
Shakespeare’s strong cast comprises several company regulars. Cat Thompson is deliciously sly
and sultry as the scheming Mrs. Cheveley, relishing the power she holds and isn’t shy about
exploiting. Nick Sholley is a charmer as Sir Robert Chiltern, the compromised politician, but he’s
also deeply conflicted, as concerned with preserving his principles as his career.”
– Sam Hurwitt, Marin I.J.

“Marcia Pizzo is exceptional as Lady Chiltern, as she watches her ‘ideal’ husband’s pedestal
degenerating to dust. The confrontations between the husband and wife are beautifully
accomplished by the two splendid actors. Darren Bridget has all of the best Wilde witticisms and is
outstanding as the effete Lord Goring. (“To love oneself is the beginning of a lifelong romance.”)
The altercation between Lord Goring and Mrs. Cheveley in the second act is skillfully done.
Julian Lopez-Morillas once again gives a superlative performance as the Earl of Caversham, father
of Lord Goring.”
– Richard Connema, Talkin’ Broadway