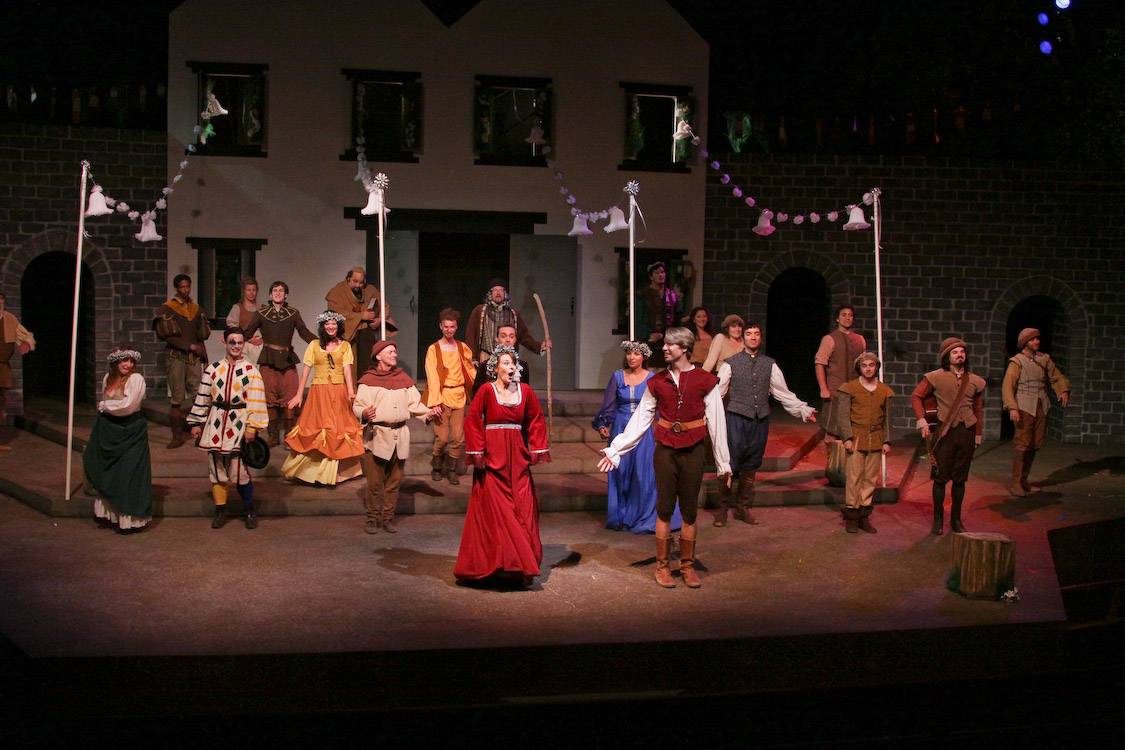 As You Like It
by William Shakespeare
Directed by Robert Currier

Wow!  We celebrated our 25th season with a classically costumed production of the very first show we produced in 1990 — Shakespeare’s lyrical, sylvan AS YOU LIKE IT.  We planned a kick-off Gala Dinner at the gorgeously refurbished Edgehill Mansion on the Dominican campus.  We planned a fabulous Opening Night Silver Season Celebration to include all our friends and fans, with a dessert buffet and champagne toasts and a pre-show ceremony with respected local dignitaries.

What we didn’t plan was that an anonymous angel would honor our 25th season and support our future with a $1,000,000 gift.  Wow indeed!!!

The production was a dream, with Elena Wright masterfully bringing to life Shakespeare’s mercurial heroine, coupled with Teddy Spencer, new to the Bay Area and the Forest Meadows stage, as a charming and lovable Orlando.  Scott Coopwood did a double turn as both Dukes, and Glenn Havlann — the only actor from the 1990 production also in the 2014 production — played a soulful Jaques.  Sean Mirkovich (in the part Glenn played in 1990) brought his musical skill to the role of Amiens, and Intern Sam Rubin blew the roof off the theatre (well, metaphorically) with his incredible solo singing performance.

There were a slew of fabulous new-to-Forest-Meadows actors who we hope to see more of: the lively Livia Demarchi, campy Allen Darby, multi-talented Davern Wright, feisty Kit Grimm, adorable Braedyn Youngberg and over-the-top funny Val Garrahan.  With some of our favorite comic actors returning as well – Adam Roy, Jeffrey Lloyd Heatherly, Alexander Lenarsky, and Luisa Frasconi – it was a delightful group of actors both on and off the stage.  Julian Lopez-Morrillas once again gave us all an acting lesson, bringing to life the comic role of Corin with tremendous skill.

We experimented with amplified sound for the first time, which was well received by most of our audience.  Somehow we all seem to be getting older, and enhancing the sound is well appreciated.

To everyone who has supported, enjoyed, participated in, and cheered for Marin Shakespeare for the past 25 years — thanks, thanks and ever thanks.  You are wonderful, wonderful, and most wonderful wonderful, and yet again wonderful, and after that, out of all whooping!

O what a privilege to spend the past twenty-five years with Shakespeare! Twenty five seasons of Shakespeare under the summer stars. A thousand performances filled with sweat and spittle, brilliant interpretations and hilarious invention. Hundreds of actors engaging with genius. Tens of thousands of students experimenting and learning. Countless moments of insight, inspiration and discovery. Shakespeare in Marin has touched many lives. 1n 1991 Carlos Papierski played a murderer and doctor in our Macbeth; now known as Carlos Bernard he was a regular on the TV show 24 and one of People magazine’s “50 Most Beautiful People.” Assaf
Cohen acted in several MSC shows before becoming an Academy Award winning film and TV actor. We first met Hannah Husband as a fledgling Shakespearean actor in middle school; she has now toured the U.S. with the National Players performing Beatrice in Much Ado About Nothing and Emilia in Othello. Victoria Evans, Sara Betts and Sheila Devitt, all former MSC Interns, have led or lead African-American Shakespeare, Shady Shakespeare and Shakespeare at Coppolla Winery respectively. This list goes on and on.

Recently, an audience member who saw us grocery shopping emailed to say she tried to say hello but couldn’t stop crying – Marin Shakespeare had been an annual tradition she shared with her mother, recently deceased; she now brings her children to the plays. There have been first dates at Forest Meadows, marriage proposals, and we even know of one child conceived in the dressing
rooms, which we can only imagine was motivated by Shakespeare’s passionate love poetry!

Our work in schools has inspired reports from classroom teachers of a selective mute who spoke for the first time in drama class, eliciting cheers from fellow students; students who gained the life-changing ability to make a presentation in front of the class; students who found an outlet for their creativity and imagination. Our work with Shakespeare at San Quentin has proven the
transformational power of Shakespeare to inspire growth and change.

And now we have a million great reasons to look forward to a future when we will reach higher, dig deeper, and continue to expand how we share and are touched by Shakespeare. As you enjoy the three classic plays we’ve chosen for this celebratory season, we hope you will reflect on how Shakespeare has touched your life. Perhaps some of the words you hear today will charge your imagination or touch your heart. Perhaps the experience of Shakespeare under the Stars with friends and family will soothe your soul. Whether Shakespeare is a momentary thrill or a lifetime pursuit, we hope you will be inspired. Enjoy the shows!

“…could mark the beginning of a golden era for Marin Shakespeare.”
– Charles Brousse, Pacific Sun

“…a strong production….it’s a darn good start for the company’s next 25 years.”
– Sam Hurwitt, Marin I.J.