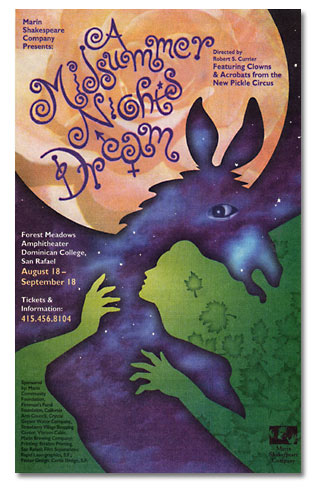 For our fifth season, we finally gave in to the joy of A Midsummer Night’s Dream. (We were quite proud that we waited five whole years before selecting what could be considered the pick of the crop of the Shakespeare plays.) We threw ourselves into the fun of it with our usual abandon!

Having worked with Jeff Raz on The Comedy of Errors, we had it in our heads that he would be the perfect Bottom. When we called Jeff, he said he’d love to play the role, but we had to meet his clown partner who, he said, was born to play Puck. Many, many actors over the years had told us that they were born to play Puck, so we went to the meeting with a large dollop of skepticism. Imagine our delight when we were introduced to the incredible Diane Wasnak, a tiny, muscular clowning genius who performed inhuman feats of athleticism and created impishly comical characters. Not only was Diane Wasnak born to play Puck, we think she may in fact be the spirit of Puck reincarnated.

This production also marked another first for us as former apprentice Dan Wolf returned to the stage in a principal role, as Flute, the bellows-mender.

We were delighted to receive our first Bay Area Critics Circle nomination for“Best Entire Performance” for A Midsummer Night’s Dream and even more delighted to be named as winner at the awards ceremony. The final performance, a Sunday matinee, was our first sell-out, with people filling every available seat and covering the surrounding hillsides – a total audience of 667 people, a record not to be broken for many seasons to come. 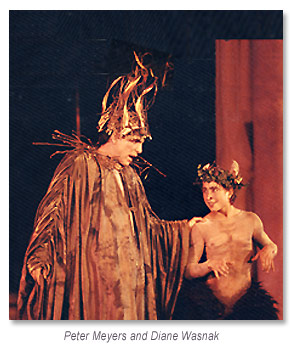 “In choosing plays for an outdoor Shakespeare festival, it is the primary function of an artistic director to choose the right play for this time and place….Every few years, however, this pressure to make the critical right choice evaporates like the morning dew on a hot August day. It is time, once again, for a production of The Most Popular Play of All Time….This season we are fortunate to be presenting A Midsummer Night’s Dream. Oh joy! Oh rapture! Oberon and Titania! Puck and the Fairies! The Lovers! And who can resist Bottom and the Mechanicals, everybody’s favorite community theatre troupe – all set to the Bard’s euphonious language. Just as many theatre companies count on an annual box office boost from the sure fire A Christmas Carol, so Shakespeare festivals in general depend on the Dream in rapid rotation. It is the Sandy Koufax of their starting lineup. So it was with remarkable restraint that we held this trump card in abeyance until our fifth season. We knew back in 1990 the Bay Area was not looking for just another run of the mill production but that if we worked hard, survived and grew that we might produce a truly exceptional Dream and even (dream on!) attract the likes of say, the wonderful clowns and acrobatic performers of the Pickle Family Circus. Now in 1994 we hope you enjoy the fruits of our patient labor. For, as Bottom informs his enthusiastic fellow actors, ‘the short and the long is…our play is preferred!’” 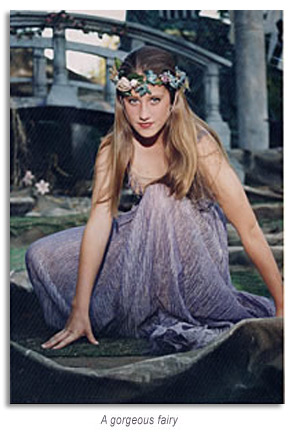 “Over the past several years the Marin Shakespeare Festival has established itself as a place to see lavishly produced, cast-of-thousands renditions of the Bard’s comedies. With A Midsummer Night’s Dream, the company has reached its zenith….wonderful, crowd-pleasing clowning and acrobatics. The surprise is that the acting that goes along with this physical theatre is excellent….It’s impossible to see a production of A Midsummer Night’s Dream of this quality without marveling at how free, sweeping, and completely modern Shakespeare’s Elizabethan imagination seems today. To watch this wonderful summer dream unfold in a forest in San Rafael, while the full moon rises behind the stark white temple ruins, is to experience the joy of wanting, at that moment, to be nowhere else on earth.” Peter Magnani, Pacific Sun

“Midsummer is magic at Forest Meadows….the innocent and harmless Forest Meadows is transformed into an enchanted woodland – full of fantasy, romance and realism. A Midsummer Night’s Dream is truly fun for the whole family.”
Roberta Floden,
Marin Independent Journal

“Who better to prance and parade like a band of mischievous fairies if not the footloose and fancy-free acrobats of the New Pickle Circus? Their graceful and enchanted antics infuse one of Shakespeare’s most magical comedies with a delightful spectacle and nimble wonderment.”
Erika Milvy, Santa Rosa Press Democrat 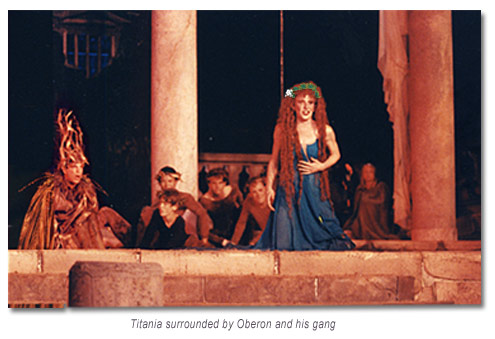 “From archery to trapeze acts, tumbling to a Titania with an Ethel Merman voice, the Marin Shakespeare Company’s outdoor production of A Midsummer Night’s Dream offers a midway’s worth of diversions….What’s gratifying about the show…is how much of Shakespeare’s whimsical frolic survives — largely via the production’s masterfully played Puck. This may not be a Dream rich in romantic or haunting magical overtones, but there’s a playful and sometimes lucid energy behind it that carries you along for the ride….Wasnak is the most adroit and physically expressive Puck I’ve seen.”
Steven Winn, San Francisco Chronicle 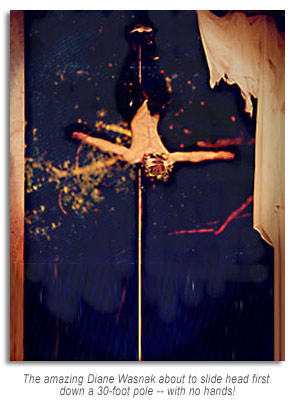 “Prancing, piping on a soprano saxophone, cackling with infectious glee and defying gravity as she clambers up and down – sometimes upside down – a metal pole, Wasnak is Puck as the Pan spirit that infuses the whole show. She’s delightfully mischievous, an imp so cagey-loony that she easily defies all constraints of reason. The lilt in her voice matches the seemingly boundless energy of her actions.”
Robert Hurwitt, San Francisco Examiner  (More Pictures)