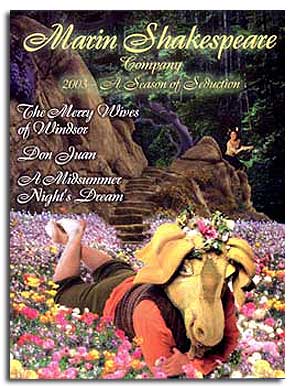 Summer 2003 was a summer of understudies. One tense weekend Bob Currier went on for Thomas Lynch in The Merry Wives of Windsor, while Mary Knoll carried book as Sganarelle in Don Juan as I took over her much smaller role. So we thought we’d been through quite a bit by the time we got to A Midsummer Night’s Dream.

When Diane Wasnak – who had created a signature Puck, complete with acrobatics done with her trained circus dog Bonzer – missed a tech rehearsal due to a stomach ache, we were concerned, but we knew she’d be fine; after all, Diane was one of the fittest people we knew, a 99-pound human muscle, a dazzling physical talent. By Tuesday night before our Friday opening, Diane was in the hospital, but I was optimistic, watching rehearsal from the house. By Wednesday night, I walked through her part in my street clothes. Thursday, I reluctantly donned the stretchy costume (it barely fit and kept ripping) and starting learning the blocking, lines and fight choreography in earnest.

We had billed this production as the triumphant return of what we had deemed when celebrating our 10th anniversary as the best performance ever given at Marin Shakespeare Company. Diane was born to play Puck. Every move, every line reading, every insouciant reaction was essentially Puckish. In 1994 and 1996, Diane had played Puck complete with jaw-dropping acrobatics, many of which were performed on a 30-foot pole and involved things like sliding head down and escaping death by the pure strength of her thighs gripping the pole just before she smashed into the stage floor. Fortunately, this year, at age 40 or so, Diane had decided instead to work with Bonzer. I was able to replicate poorly a few of the dog tricks due to Bonzer’s fine training, but there was no way I would have been able to climb the pole! 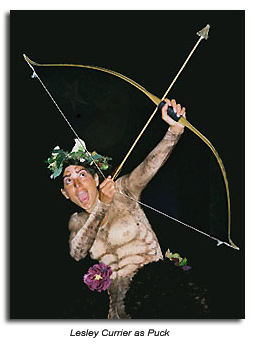 I was terrified. It was a physical workout. It was a feat of concentration and will power. The audiences loved it. I ended up performing in eight shows. Bonzer came to live with us and he and I would visit Diane daily at Kaiser while the doctors tried to figure out how to make her healthy.

Eventually, Diane returned, much to everyone’s delight – most especially mine. Oh, and the rest of the show (once I got to see it) was fantastic. Jonathan Gonzalez’s death scene as Bottom was a particular show-stopper. And once again we had proven that “the show must go on.” 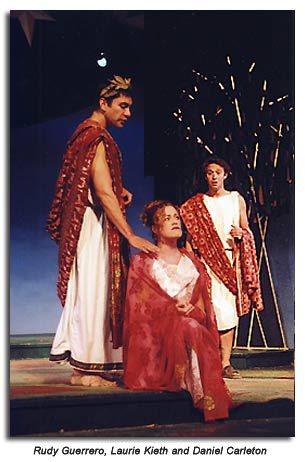 “True Story: Last year when Lesley and I were playing Titania and Oberon with our Baja Shakespeare company, I came to that magical speech (one of many) when Oberon, plotting with Puck, says:

My gentle Puck…Thou rememberest
Since once I sat upon a promontory,
And heard a mermaid on a dolphin’s back
Uttering such dulcet and harmonious breath
That the rude sea grew civil at her song…

I turned my gaze to the Sea of Cortez which, conveniently, backs our Baja stage, and at that very moment a dolphin breached the surface and rolled back into the sea. Granted, I did not see the perhaps invisible mermaid, but it was one of those half dozen moments in a lifetime of theatre that froze me in my tracks.

And I thought, how luck are we happy few to do this amazing play. A Midsummer Night’s Dream is like that, a dream of a play. It is the chocolate chip in the Shakespeare canon cookie. It’s never a question of why a theatre wants to do Dream, only a question of how long before you can do it again.”

“Bob Currier sounded more like the coach of a football team around Thanksgiving, having visited one sick principal player in the hospital that afternoon while getting ready to take the part of another injured principal himself – until getting word that the pain pills had kicked in for that night’s show – admittedly stalling with his welcome speech for another actor to get out of traffic…yet the show’s director was relaxed, genial, even joshing about the company’s troubles…His confidence was more than justified: Lesley Curier’s pick-up performance proved to be the crown of a charming production of what’s perhaps Shakespeare’s most charming play – certainly the most popularly performed – as the last show in what’s been Marin Shakespeare’s best season.”
– Ken Bullock, Commuter Times 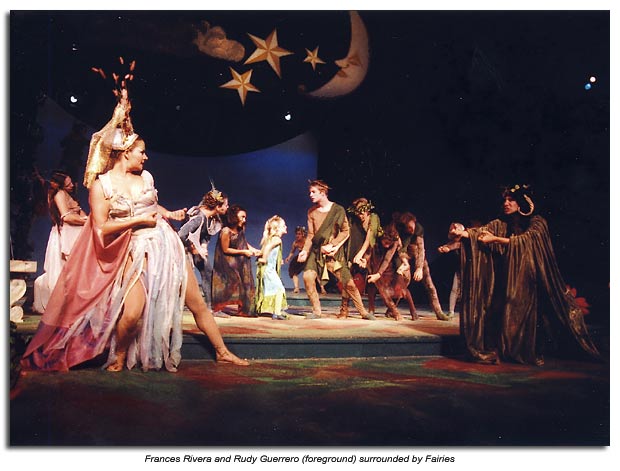 “While it would be unrealistic to expect [Currier] to match Wasnak’s athleticism, her performance blended smoothly with the fine work turned in by the remainder of the cast. As staged in the sylvan confines of Dominican University’s Forest Meadows Amphitheatre, this is a magical and entertaining ‘Dream‘ that should delight even those who have seen the play many times…Substitute Puck and all, this is a ‘Dream‘ to be savored.”
– Charles Brousse, Marin I.J. 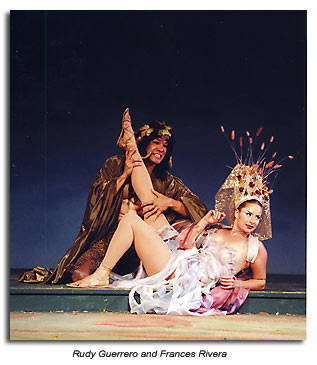 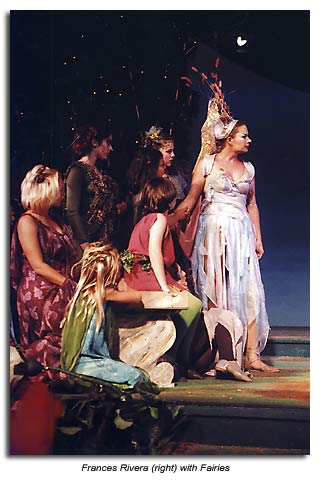 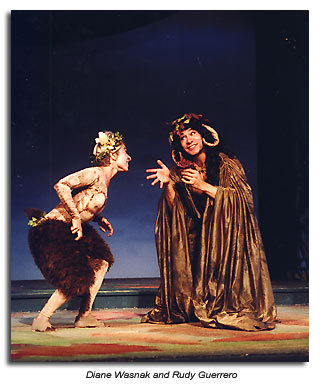 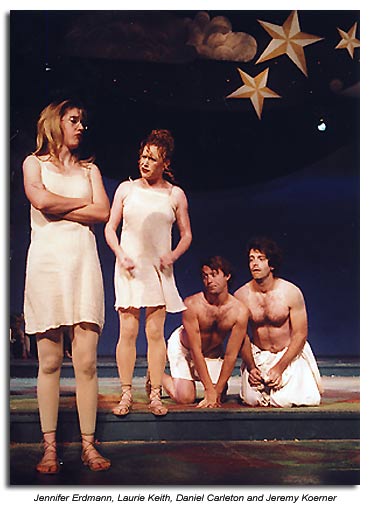 “Lesley Currier, with a great deal of pluck and not a whole lot of experience, took the role of Puck, gamely donning the fabulous getup designed for Wasnak…But she pulled it off, and even seemed to be enjoying herself…The standouts are Hermia and Helena, played by Laurie Keith (Hermia) and Jennifer Erdmann (Helena). Each imbues her role with the right medley of silliness and sighs.”
– Olga Azar, Marin Scope 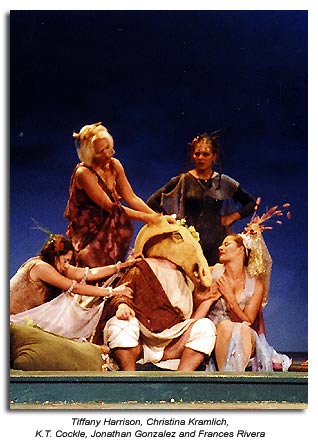 “The injured Rudy Guerrero, who was onstage much of the time, portrayed both the dignified Theseus and the growly, cloaked Oberon with barely a twitch, except in the dance. Leslie [sic] Currier’s Puck, in goat pants and tail, was consistently caprine. Veteran performer Thomas Lynch played Peter Quince, the beleaguered director of Pyramus and Thisbe, and Jonathan Gonzalez captured the wonderful role of Bottom.”
– Rosine Reynold, Tiburon Ark 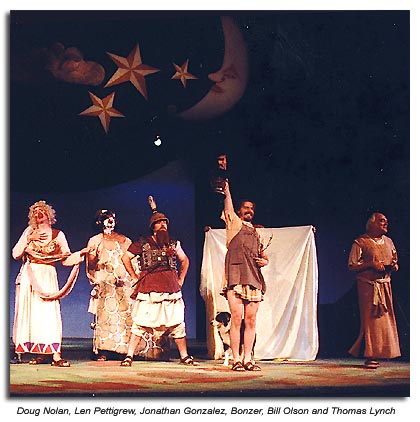 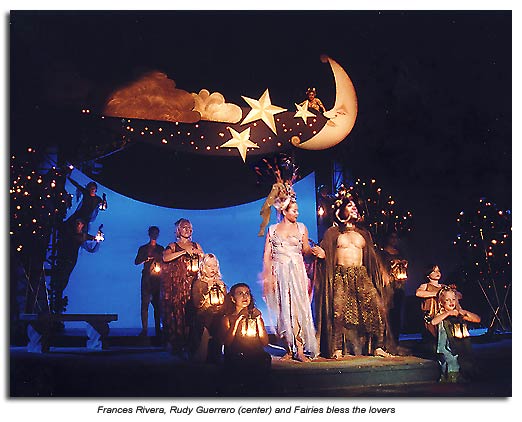 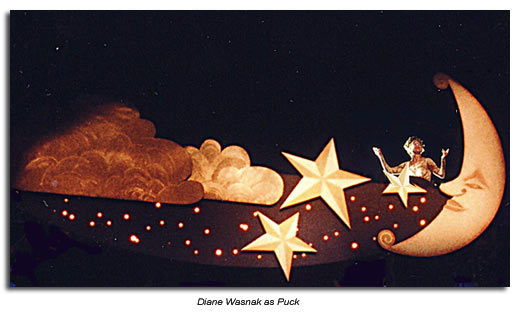