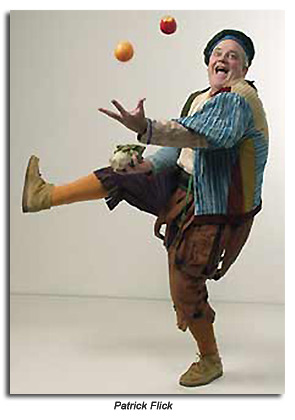 What really excited us about this production was that it was one of the first where we felt we had a fully professional-quality cast. With six Equity contracts and only nine principal characters, we assembled a company of actors with no weak links that could not be topped in Marin. Pat Flick was a wonderfully energetic and inventive Truffaldino, beloved by the audience as well as by Marie Shell who created a charmingly funny Smeraldina. Marcia Pizzo and Scott Coopwood were a powerfully sexy couple in the roles of Beatrice and Florindo. (Playing two ‘pants-roles’ in repertory took a toll on Marcia’s voice, but she was amazingly resilient.)

Real-life sweethearts Bob Borwick and Kelly Balch brought their considerable physical talents to the roles of Silvio and Clarice. Thomas Lynch was born to play Pantalone, and his scenes with Ian Swift’s Dr. Lombardi were hilarious. Peter Schmuckal, an ever reliably brilliant actor; an athletically game Jason Heil; unicyclist Slater Penny, and two lucky Interns rounded out the cast. 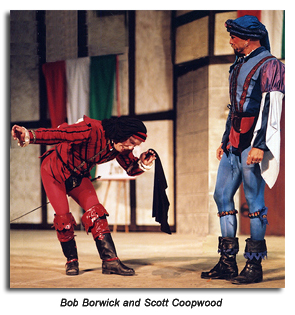 This is a great, classic comedy. And it played beautifully outdoors at Forest Meadows. The huge set, which worked so well for As You Like It, made the production a real physical workout for the actors, but no one complained. The costumes by Pamela Johnson were extraordinarily colorful and fun.

The translation we used was created by our dear friend Rob Clare and his collaborator Justin Gregson. Justin flew from England to see the production and to give a tongue-tied introduction to the play. It was a pleasure to witness his delight in seeing the work produced – and a rare treat for us to work with living playwrights! 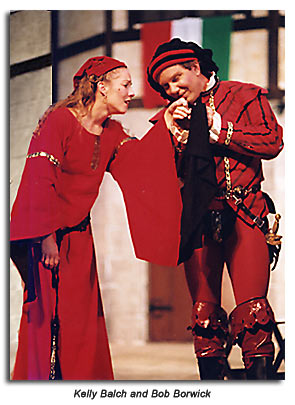 Director Robert Currier worked very hard to get all of the actors to create a style of playing that was consistent, honest, yet superbly physical and exceptionally funny. This was a delightful production of a superlative piece of theatre with a dream cast. 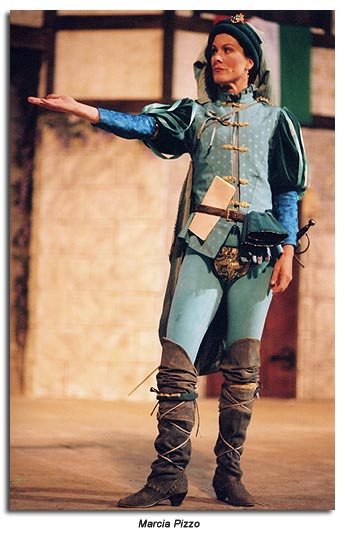 From the Playbill
It should come as no surprise that the century that produced our beloved Bard also nurtured significant flowerings in drama throughout Europe. In Spain alone, Miguel de Dervantes (1547-1616) was writing Don Quixote while Lope De Vega (1562- 1635) was composing some 1800 dramatic works. But the Renaissance theatre of greatest and most lasting importance apart from Shakespeare’s was the commedia dell’ arte. This phenomenon began in Italy and toured throughout Europe, mainly on medieval-type platform stages erected in marketplaces during the 16th and 17th centuries and beyond.

But all good things must come to an end. By the 18th century fresh invention had ceased, the spirit waned, and the spent comedians were salting their now stale intrigue plots and stereotyped buffooneries with rude sensational incident and suggestive gesture. Women in childbirth and mock circumcisions were material for farcical treatment and the chamber-pot had become a favorite prop. Was commedia finished?

Enter Carlo Goldoni. Born in 1707 in – where else – Venice to stage-struck parents, he became the great reformer of Italian theatre as librettist for Mozart, among others. Beginning in 1745, Goldoni launched an attack on the debased and decayed state into which commedia had fallen. From his over 150 works written during the next 18 years, The Servant of Two Masters has emerged as one of Goldoni’s most enduring plays. With honed dialogue and developed characters, Servant merges commedia with a richer, more naturalistic style of comedy. 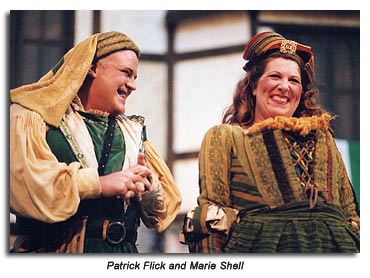 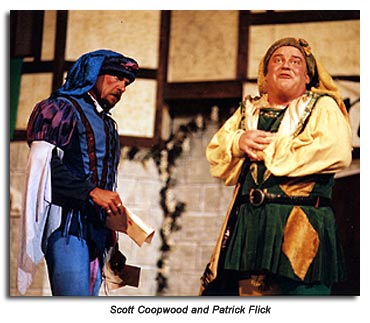 As Justin Gregson, translator and co-adaptor of our version of the play says, ‘It is almost as if the ‘myth’ of the world of this play, the stock characters and situations, is being shown for the last time; but we are clearly shown how that myth – the grasping father, the lovers, the ridiculous pedant, the maid who runs everybody’s lives, the rustic anarchic life-force – can continue to shadow a more realistic world.’

“Rolling blackouts this summer? Not to worry. There’s enough energy on stage in Marin Shakespeare Company’s production of Carlo Goldoni’s wonderful 17th century comedy ‘The Servant of Two Masters‘ to power all the light bulbs, computers and hot tubs in California, if not the entire country. The only problem might be that a 2 ¾ hour exposure to this nonstop laugh fest may leave you feeling a bit limp. If that happens, relax. Brilliant clowning like this is so rare that you would do well to enjoy it while you can… It [Patrick Flick’s Truffaldino]’s a tour de force of comic invention that ought not to be missed… With nicely paced, imaginative staging from MSC’s artistic director Robert Currier and wonderfully colorful costumes by designer Pamela Johnson, this ‘Servant‘ is a treat for the entire family.”
– Charles Brousse, Marin I.J. 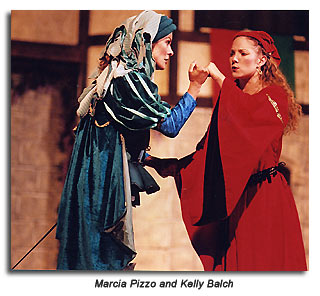 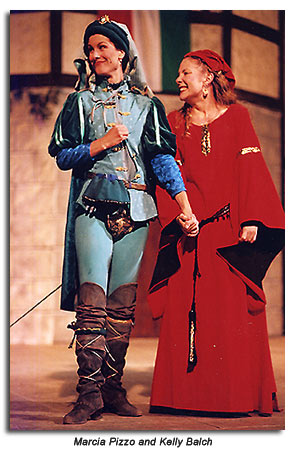 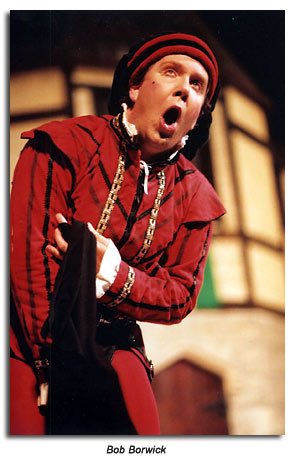 “The play is a natural for summer family entertainment… the kids enjoyed A Servant of Two Masters.”
– Lee Brady, Pacific Sun 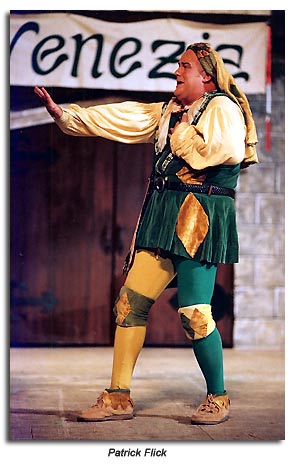 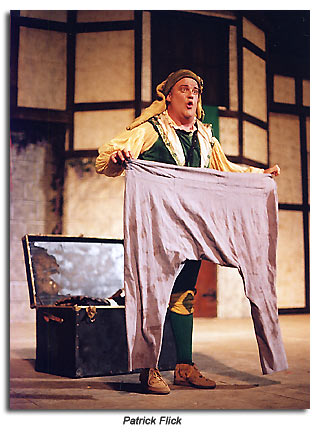 “…an enjoyable, sometimes bawdy romp that pleases with its mix of humor, fluff, and rapid-fire wit. The ostensible star of the show is the titular servant Truffaldino, played with a surprising and effective blend of straight comedy and acid wit by Patrick Flick. One rewarding aspect of this adaptation of ‘Servant‘ is its use of topical asides to enliven the comedy, and Flick puts that freedom to good use when addressing the audience directly, more like a stand-up act than a night of classic theater… good, simple laughs can be hard to come by, and Goldoni’s script and these actors’ performances give them generously.”
– Olga Azar, Marin Scope