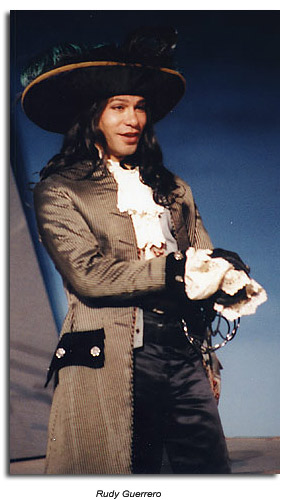 It’s always a joy to reconnect with an old friend. So I was delighted when Bob Goldsby’s granddaughters moved to Marin and signed up for a Shakespeare camp, affording us a visit with Bob when he came up to see the girls. I first met Bob as an MFA student at U.C. Irvine. Jackson was just a few months old and I was given an internship as an ensemble actor in a production of Hard Times at South Coast Repertory Theatre which featured Jarion Monroe, Anni Long and Robert Sicular and was directed by the impish and ever-so-sweet Bob Goldsby. No one minded that I nursed Jackson in the green room between romping around onstage. We were really impressed to be invited to a cast party at Bob’s lovely Malibu home. 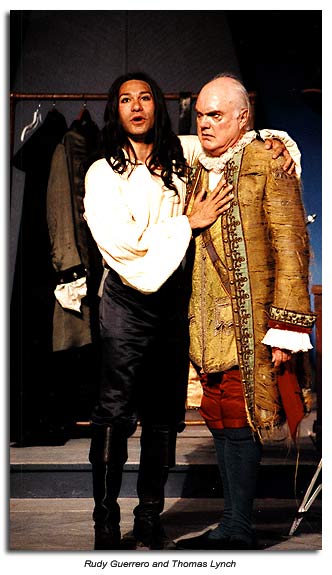 Seeing Bob again was a delight. And, coincidentally, we learned he was a tremendous Moliere fan, having studied theatre in France and translated many of Moliere’s plays. We had been thinking about offering some Moliere – a taste of classic French theatre that has so many similarities and differences with Shakespeare. And suddenly we had an expert Moliere director and translator, and one who was looking for a good excuse to spend more time near his grandkids in Marin. 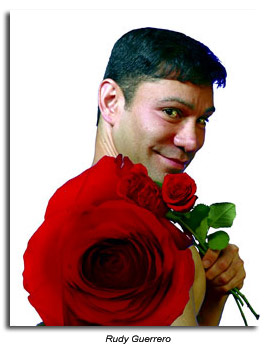 We talked about doing one of the popular comedies, but we were mostly keen to have Bob do something that would really turn him on. So when he suggested a play that is not chock full of laughs, one that is more philosophical and that has no real ending, one with a statue that comes to life and a hell-swallowing pit, of course we were thrilled to tackle something that seemed like a great challenge. Bob’s idea was that each act of the five act play would be presented in a slightly different acting style: romance, street theatre, melodrama, etc. Angie Paton, Bob’s wonderfully talented wife, sat in on most if not all rehearsals and was a tremendous presence. (My kids recognized her from Adam Sandler’s The Wedding Singer and American Pie, but we knew her as an astonishing lead actress at theatres like Berkeley Rep.) 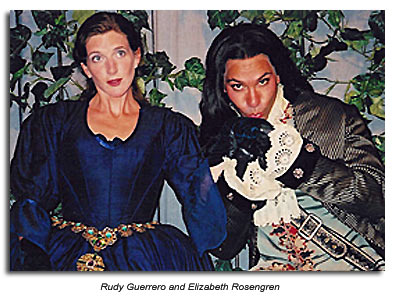 “The Currier’s biggest success, though, has been acquiring the services of Robert Goldsby…. Goldsby is an old hand at staging Moliere and he’s directed ‘Don Juan‘ with wit, style and inventive flourishes. It looks good…. Guerrero’s Don Juan is astonishing after his arch, gay coxcomb Dr. Caius. His Don Juan is every bit as much an egocentric dandy, but rakishly macho with an almost palpable lust for the ladies. He’s engagingly casual in his defiance of all moral codes…. Thomas Lynch is engagingly flustered and quick as his disapproving servant Sganarelle, desperately inventing alibis and expertly delivering hilariously confused arguments for the existence of God…. Bridgett is superb as a loquaciously inarticulate bumpkin…. Goldsby and Paton’s translation conveys Moliere’s satire of pious and political hypocrites with a scathing clarity that couldn’t be more timely.”
– Robert Hurwitt, San Francisco Chronicle

“Marin Shakespeare’s Don Juan is a joy… Handsome Rudy Guerrero is a believable Don Juan, insolent, daring, an accomplished seducer with a hint of foppishness, and who confides to the audience, ‘this is the way a politician adapts himself to his time’… Darren Bridgett is superb in the country bumpkin role of Pierrot… Staged in the manner of a traveling road company, the exhilarating flavor of this Don Juan owes much to the vivacious tumblers, jugglers, flame eaters, and knockabout comedy routines of Italian commedia del arte players.”
– Gene Price, S.F. Bay Times 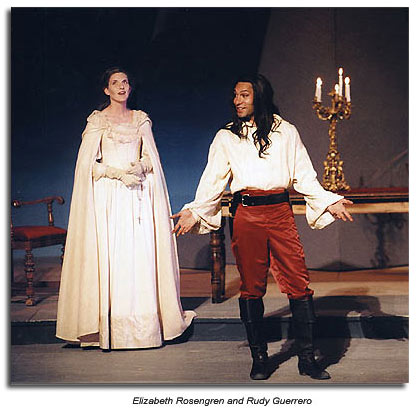 “A fine performance by Lynch makes this dark comedy work. Also Darren Bridgett as Pierrot, one of the men Don Juan steals a woman from, gives a great peformance, defining love to its comic primal essence. In addition, director Robert W. Goldsby with Angela Paton has provided a modern English translation of the play that is easy to follow.”
– David Kashimba, Talkin’ Broadway 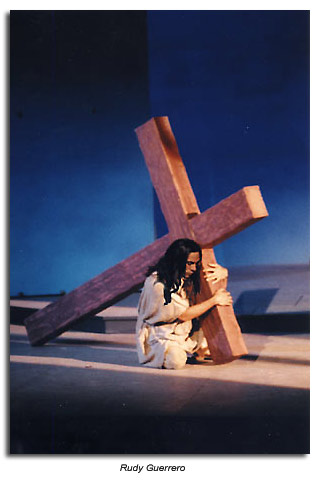 “Goldsby…stages ‘Don Juan‘ cleanly, Hollywood designer Julie Weiss’ period costumes are stunning, and Ellen Brooks’ lighting is right on the mark. Yet, though plenty of intellectual sparks fly, they fail to provide much heat on a cool evening in Forest Meadows.
– Charles Brousse, Marin I.J.

“Not that director Goldsby skimps on the theatrical: statues talk, servants come on juggling fire, and the Tony/ Emmy/ Oscar award-nominated Julie Weiss (she won 4 Emmys) designs fabulous costumes for the raggle taggle acting company who come out to perform Don Juan. The cast and excellent production values make Don Juan entertaining.”
– Lee Brady, Pacific Sun
“All in all Don Juan revived by Marin Shakespeare is a courageous undertaking that succeeds in proving the value of one of Moliere’s lesser played masterpieces.”
– Annette Lust, West of Twin Peaks Observer 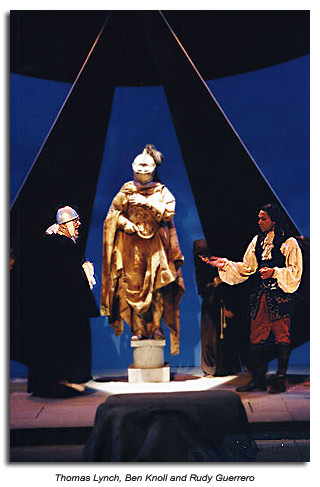 “Don Juan himself is played by Rudy Guerrero with an almost impish, sometimes sulky, humor and verve….Thomas Lynch is perfectly cast as his faithful yet contrary servant, Sganarelle….The audience applauded at the dizzying rendition of his great, cockeyed ‘rational proof’ of why his master should mend his ways – as well as at his approval of a wine enema….And Marin Shakespeare’s artistic director, Robert Currier, and producer, Lesley Currier, deserve to be congratulated for bringing director Goldsby…and this striking production of one of the greatest of plays of any age or culture to the open air stage of Forest Meadows. They’ve created an unusual theatrical opportunity that should not be missed, because it is rare (and exhilarating) to see the performance of a play that touches both the brilliant surface of life, and the depths of the human heart…with the grace of great comedy.”
– Ken Bullock, Commuter Times

“…a kooky romp with a strong philosophical bent and a dark heart….As one audience member remarked, watching Bridgett twiddle his thumbs would be entertaining. He is just fabulous….The director makes marvelous use of the stage, a versatile set guided by hooded monks transforming a dressing room into a garden. The fishing village is evoked by simple, colorful nets….A word about the costumes: they are fabulous….As enjoyable as this show is, the play itself raises more questions than it refuses to answer….It grapples with the profound while merrily somersaulting along, winking at the audience and gazing uneasily at the sky.”
– Olga Azar, Marin Scope