From the Playbill – Director’s Notes:
For our sixth season we have chosen a duet of delights which impressively demonstrate the extremes of Shakespeare’s range and talent. From a drizzly grey stone and concrete castle in England to a warm and sunny terra cotta villa in Sicily, the settings reflect the widely divergent stories. Is it possible that the same hand that penned the monstrous villainy of Richard of Gloucester could create the exquisitely frothy Much Ado? It’s as wondrous as if Bertoldt Brecht and Noel Coward were rolled into one. 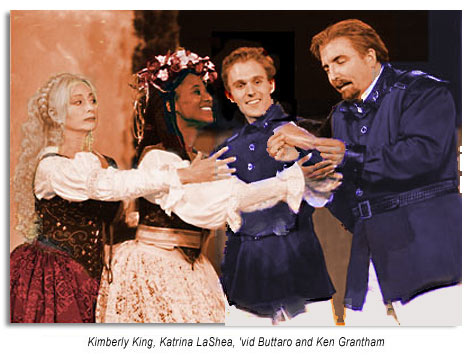 And how lucky we are to have the likes of Ken Grantham and Kimberly King! Energy is delight and accomplished dexterity a pleasure to watch. Our Beatrice and Benedick have both, as does the wonderfully silly Danny Kovacs, who plays the superbly stupid Dogberry, the bumbling, vastly self-important constable of the watch who, in the end, roots out all evil and brings peace. So sit back, relax, and forget about Bosnia and global warming for this two hour respite on our stage. For it is precisely because the world we live in is stressful and dire that Shakespeare’s comedies are such a welcome and necessary counterbalance.” 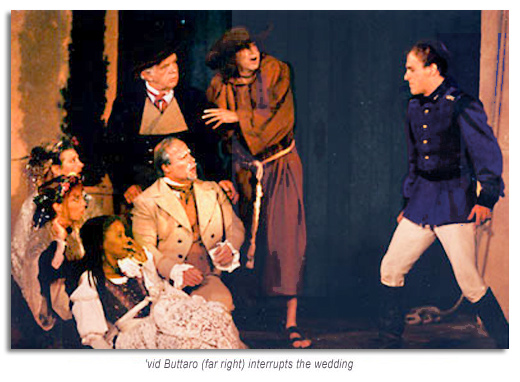 “Marin’s Much Ado is a classy production. Marin Shakespeare Festival’s production of Much Ado is not for purists. Indeed, it is well-stocked with the signature shtick of artistic director Robert Currier – neurotic tics, absurd posturing, running gags, cosmic interference, and anachronistic music. But for us ‘groundlings,’ all this ‘ado’ adds an entertaining dimension….The production is most accessible, and the laughs start early…While all of the acting is worthy of note, Much Adobelongs to Beatrice and Benedick….Four stars to Kimberly King and Ken Grantham for stellar performances.”
Roberta Floden, Marin Independent Journal

“Marin Shakespeare uses every tool in the box….They master period dances, they people their villa with distinct and fleshy characters, they enjoy one another tremendously, and they take great charge of the language, playing brightly with the bard’s barbed words….Intimate and boisterous all at the same time, the world of Robert Currier’s Much Ado is a charming one to inhabit this season.” Chrisanne Beckner, Commuter Times


“Much Ado About Nothing is a most enjoyable play, competently acted and directed and well worth seeing.”
Bess Davoren, Tiburon Ark 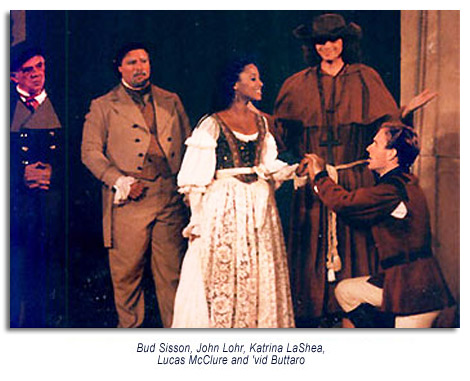 “In the Marin Shakespeare Festival production, the quarreling lovers – confirmed bachelor Benedick and quick-witted spinster Beatrice – are played by real-life husband-and-wife team Ken Grantham and Kimberly King….Grantham and King are consummate actors who draw all the humor (and then some) from their roles. At one point he hides behind a clothesline and, eyes popping, learns that Beatrice loves him rather than hating him. And she steals the show when, quite unexpected, she bursts into song with a glorious voice worthy of the Metropolitan Opera. It’s a light and engaging interpretation.”
Maggie Crum, Contra Costa Times 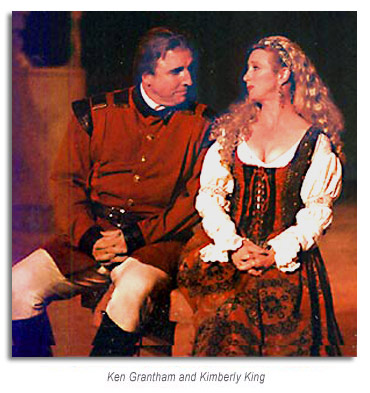 “King is a sharp, wise-cracking Beatrice, aiming her barbs at Benedick with Groucho Marx-like timing that makes almost every quip count. She’s so poised in her self-assurance that her confusion becomes that much funnier, as when she’s bowled over by Don Pedro’s out-of-the-blue proposal. She’s so determinedly merry that her sudden serious reaction to Hero’s betrayal cracks like a whip. Grantham is a thoughtful and complex Benedick, always ready with a quick comeback – except when overmatched by Beatrice – but touched by a sadness that tinges his humor with defensiveness.
We can feel his attraction for Beatrice before he becomes aware of it, and revel in the conflicting emotions of the scene in which they finally confess their love.
Robert Hurwitt, San Francisco Examiner
“Much Ado celebrates love, laughter. Robert Currier has created some wickedly funny scenes.” Mary Connell, Novato Advance