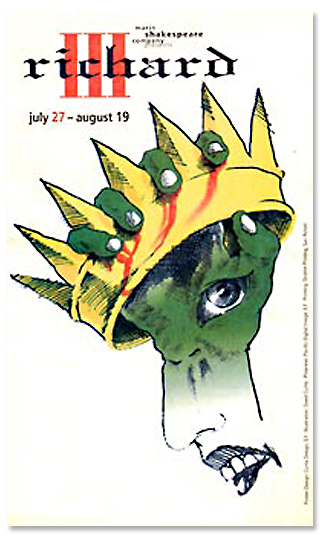 When we began the Marin Shakespeare Company, we shared Forest Meadows with a World Music Festival which had begun around 1984 and had established itself at the Amphitheatre for the month of July. The World Music Festival disbanded after its 1993 season, but there had been talk the following year about a new producer resurrecting the event. When, indeed, this did not occur, Domincan College (as it was then) gave Marin Shakespeare Company permission to expand our operations to begin earlier in the summer. Therefore, in our sixth season, we were finally able to become more of a true ‘festival’ and present two plays for the first time.

Richard III opened the season, and was a showcase for a tremendous actor living in Mill Valley, Jarion Monroe. Jarion and Bob Currier had been two of the founders of the Ukiah Players Theatre, a thriving community theatre in Mendocino County, where Bob had spearheaded the construction of a lovely 133-seat theatre which remains one of the town’s crowning cultural jewels. In his many years performing lead roles at Ashland’s Oregon Shakespeare Festival, Berkeley Shakespeare Festival and later California Shakespeare Festival, A.C.T. and Orange County’s prestigious South Coast Repertory Theatre, Jarion had never had the opportunity to play one of his dream roles – Shakespeare’s bloody, misshapen Machiavellian, Richard III.

With Bob choosing to direct the season’s comedy, a guest director was sought for this, our first history play. Ken Grantham, a leading Bay Area theatrical talent who had directed at the California and San Francisco Shakespeare festivals and at the Magic Theatre which he co-founded, was tapped.

As a bonus, Ken happened to be married to a luminous actress, the lovely and powerful Kimberly King. As it turned out, this real-life couple had dream roles of their own: Shakespeare’s spatting, spirited duo fromMuch Ado About Nothing, Beatrice and Benedick. Our first expanded season was turning into a true actor-inspired endeavor. 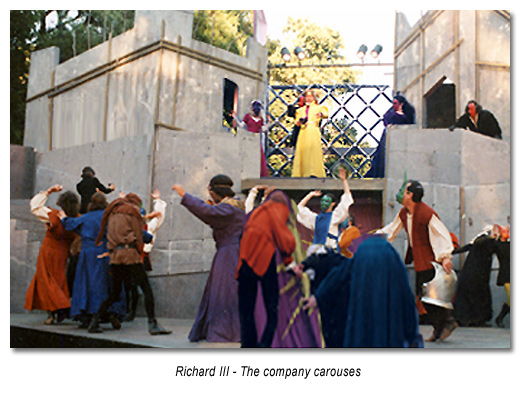 Jarion was fantastic in the title role of Richard – persuasively seductive while brilliantly wicked and deeply disturbed.

Kimberly King was a stunning Queen Elizabeth and a total cast of forty actors played 87 roles. Bob Currier, appropriately, as befitting the Artistic Director, took on the role of King Edward. Judi Quick, a dear and massively talented actress, drove three hours from the Mendocino coast to play a poignant ‘Mad’ Margaret. 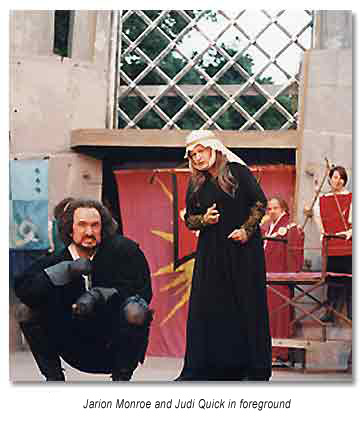 This was the first season for Lucas McClure, soon to become a regular on the Forest Meadows stage, as well as for Danny Kovacs, Jack Halton, Michael Oakes and young Matt White who played the boy Prince Edward.

The production, while not drawing our largest audiences ever, was by all accounts a great success. While we learned that it was a hard sell to get great numbers of people to attend the history plays, we also learned that we could, in fact, take on the challenge and accomplish it well.

“The chance to collaborate with my old friend Jarion in this wonderful setting lured me into [Richard’s] lair again. I happily surrender to the web of Shakespeare’s nastiest, most challenging bad guy tale.

We examined closely the possibility of resurrecting Colley Cibber’s 1700 popularization of the play and decided that although this overlooked dramaturge had solved many of the problems of too much history and too little action in parts of the play, the language was not up to Shakespeare and the secondary characters had all been reduced to helpless victims of the great psychopathic monster.

As I see it, Richard III is a hard, blackly comic look at the patterns of the abuse of power, and it extends to the entire world Shakespeare depicted in the late fifteenth century.” 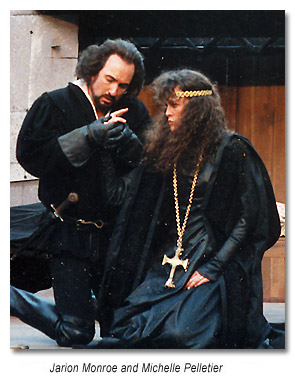 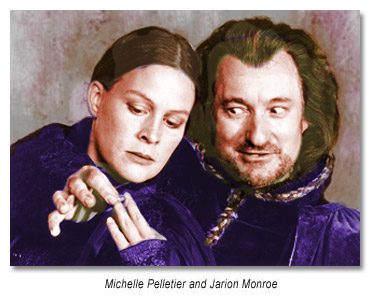 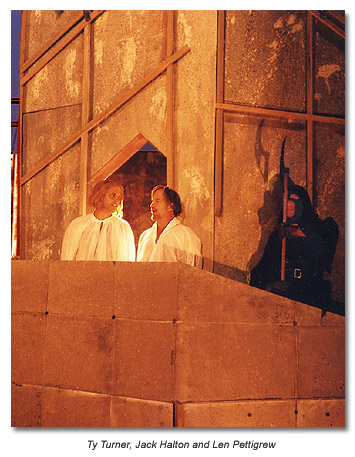 “The performances in Marin’s Richard III are its real strength, and they make the production worth a look. Jarion Monroe is a confident, grand-scale Richard, alternating mainly between coarse savagery and private sarcasm. There’s an extraordinary moment in the middle of the play, when Richard’s young nephews are mocking him, and one of the children jumps up on his hump. Richard looks helpless, and we’re suddenly cast back to the unimaginable torment of this misfit’s childhood….Kimberly King gives a performance of extraordinary clarity, energy and velocity….electrifying every scene she’s in….the brutish nature of 15th century politics is felt in all its suffocating horror.” Mick LaSalle, San Francisco Chronicle 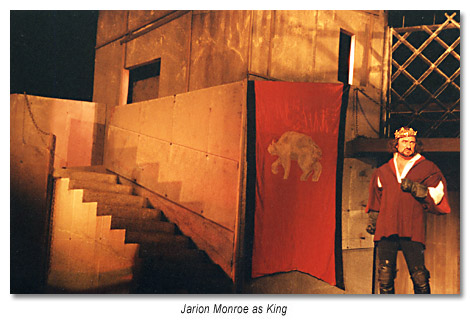 “The Marin Shakespeare Festival has reached a couple of important milestones in its quest to become one of the major players in the Bay Area bardic sweepstakes. It’s survived, for one thing, long enough to make it into its sixth season at Forest Meadows on the woodsy Dominican College campus.

It’s doubled in size….veteran Shakespearean Jarion Monroe is an apt choice for the title role….Grantham and Monroe have come up with enough creative twists to keep the title character fresh and generally engrossing.

Monroe is a bright, self-mocking villain, winning us over – even as he horrifies us – not only with his conspiratorial asides but with the way he concocts his schemes on the fly.”
Robert Hurwitt, San Francisco Examiner

“Jarion Monroe plays Richard in the Marin Shakespeare Company production with admirable control and restraint. He is relentlessly vicious, he moves with high energy and he speaks with savage bite, but at no time does he go over the top.

It is a compelling creation, this Duke of Gloucester, vivid and intelligent….Director Ken Grantham’s production is…honest and straight-forward, in period, expertly staged (the battle scenes, Richard’s agonizing death, the ghost’s visitations, etc. are all impressive) and the lines are well spoken. Grantham has made exemplary use of the magnificent amphitheatre which is surrounded by tall California Bay and eucalyptus trees, with actors entering from many areas and often crossing a bridge covering a moat to reach the stage. Gene Angell and Ron Pratt’s set with flats which give tower and parapets a three-dimensional effect is hugely serviceable, while Callie Floor’s costumes are colorful and, in some cases, truly gorgeous.”
Dean Goodman, Drama-Logue

“Under Ken Grantham’s marvelous direction and with Jarion Monroe’s extraordinary acting, the evil, back-stabbing court of Edward IV is decimated by the arch villain Richard….The entire cast of actors is strong….The lighting by Harry Rubeck is grandiose and melodramatic in the right places – red light halos the spiked heads of Richard’s noble execution victims, and red light streams from Richard’s hair when he pretends to refuse the offered crown.”
Julia Hawkins, Pacific Sun 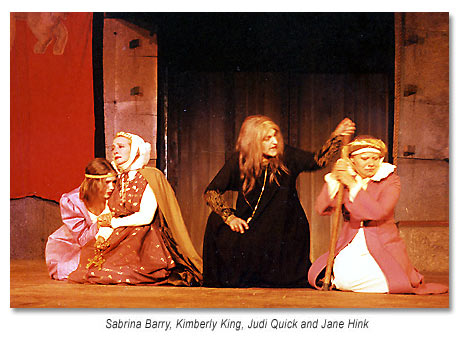 “Jarion Monroe…opened the Marin Shakespeare Company’s production with a commanding performance….Richard III, staged outdoors at Forest Meadows in San Rafael, is a lavish production by local standards….For those concerned about followingRichard III, have no fear. Grantham and Monroe make Richard III understandable to even the novice.” Mary Connell, Novato Advance 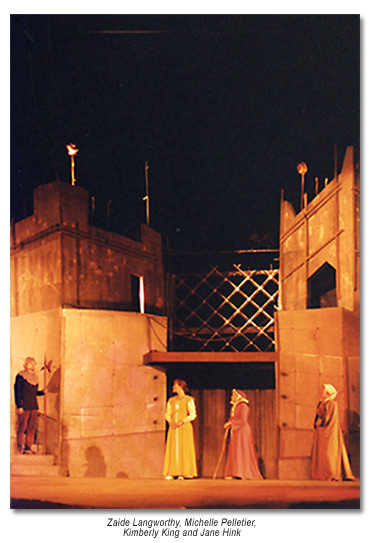 “At the Forest Meadows Amphitheatre at the Dominican College in San Rafael, the Marin Shakespeare Company is delivering the tyranny of Richard III to appreciative audiences. The performance, which is a masterpiece, is under the direction of Ken Grantham….the entire cast…deliver exceptional performances.”
Charles Jarrett, Rossmoor News

“Jarion Monroe is turning in one of the most unique Richards ever performed. Making the evil villain of Shakespeare’s tragedy into a man full of comic deception and farcical nastiness was a choice director Ken Grantham supported down to the last detail….This Richard was in a way the most real of all Richards.”
Chrisanne Beckner, Commuter Times