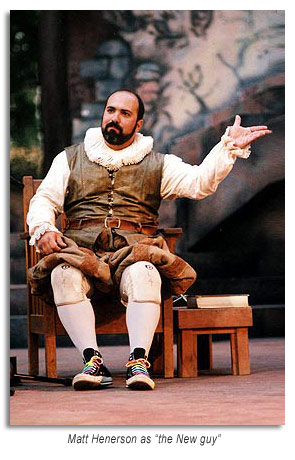 Although we had never brought back a show before, we had so many audience members calling for a return of The Complete Works of William Shakespeare (abridged) — our hilariously popular farce from the 1998 summer season — that we decided to remount the production in the summer of 1999. It helped also that this was our first summer producing a three-show season. The World Music Festival, which had previously used the Forest Meadows stage each July, had ended. So the way was clear for us to expand our season. In terms of the amount of work and budget risk, remounting a three-man show we knew would be a hit seemed like a good way to ease ourselves into a lengthened season.

And again, the show drew rave reviews (from all but the most comically challenged), huge audience glee, and was way too much fun for all involved. New comic bits were added; Matt Henerson replaced David Berkson (thus forever after known as ‘the new guy’); and women again swooned over Darren Bridgett in a dress vomiting all over the front row of play-goers.

We started to field requests to bring the show to various venues – Branson School (where the kids got a few too many of the ribald jokes), a convention of hardwood sellers (who didn’t quite get it at all), and more. 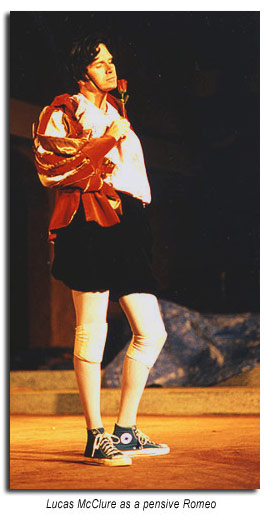 Things started appearing like s’mores, a catapult, and a monkey at a typewriter (played by Nate Currier.) New jokes, new gags, new props and costumes…new laughs from all. 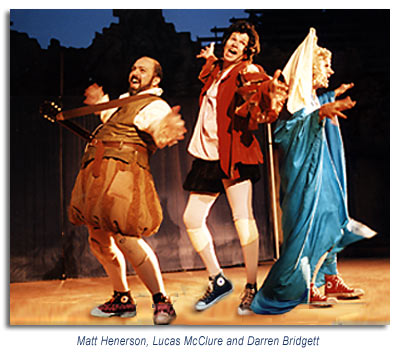 Three guys try to perform all of Shakespeare’s plays in under two hours — with hilarious relust. An evening of pure entertainment called “the funniest play of the year” by Critics Circle’s Jeff Smith. Back this year by popular demand after last summer’s extended run. No prior Shakespeare experience necessary! [and yes, do italicize the last sentence.] 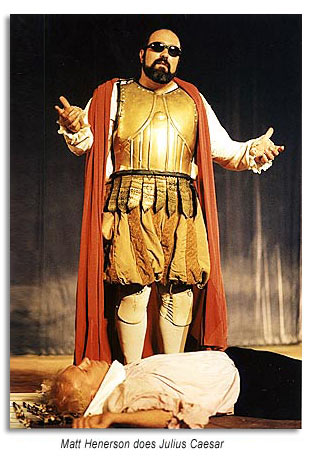 “MSC’s Complete Works tickles the funny bone…Back by popular demand, the Marin Shakespeare Company, now celebrating its tenth artistically successful year, has brought back what is undeniably one of the funniest shows to ever hit a Bay Area stage…This year’s production of Willm Shkspr (Abridged) is upscaled, updated, upgraded and uproariously funny… It is professionally performed with conspicuous comic talent but is definitely not devoid of genuine acting talent. Darren Bridgett, the engine that discretely drives the show, was recently identified by the San Francisco Chronicle as a ‘Rising Star’ within Bay Area Theater….If your children have had difficulty enjoying theater or even sitting still in theater, this is the play for them. This critic has taken his children — and many of their friends — to see Complete Works. Some of them have seen it four times; one of them has nearly memorized the script. For better or worse, it remains their favorite play.”
– Jeff Smith, Twin Cities Times 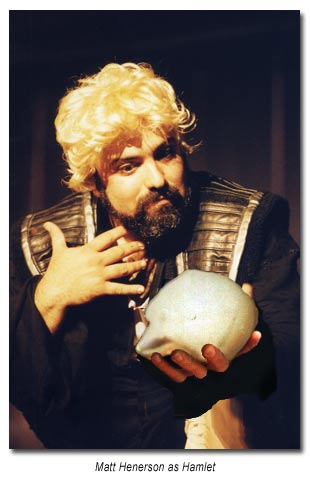 “The Marin Shakespeare Company’s production of The Complete Works of Willm Shkspr (abridged)…bounces and careens across the Forest Meadows stage through the rubber-strong resilient forces of Lucas McClure, Darren Bridgett, and Matt Henerson…For those who have not yet experienced the pleasure of submitting to this rough and intelligently silly farce, The Complete Works is a purported attempt by three good-hearted, disingenuously simple souls to present the essence of Shakespeare’s oeuvre….Shakespeare’s language is somehow amazingly set off for the glittering treasure that it is.”
– Julia Hawkins, Bay Area Theatre Critics Circle

“Costumes and props are a big part of a show in which actors have lightening-quick changes and where what they carry often indicated which play you’re currently watching. Michael A. Berg and Mary Jo Goss’s simple designs do the trick.”
– Lee Brady, Pacific Sun