All we could say was ‘wow!’ Audiences loved the show. The actors loved doing it. And we loved watching the audiences literally rolling in the aisles watching the actors doing their thing. And their thing was really, really funny. 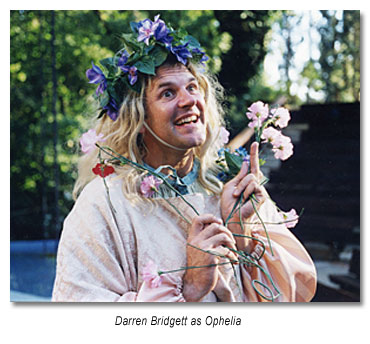 From a flirty vomiting Juliet, to a vomiting Cleopatra with a great asp-death, to a dazed and also vomiting Ophelia, Darren Bridgett won laughs and stole hearts – while proving himself to be the master of the perfect ad lib. Lucas McClure was a dashing Romeo, collecting phone numbers from all the cute young girls in the audience. And David Berkson was the perfect overly intense Hamlet overwhelmed by life, death and the recipe for guacamole. 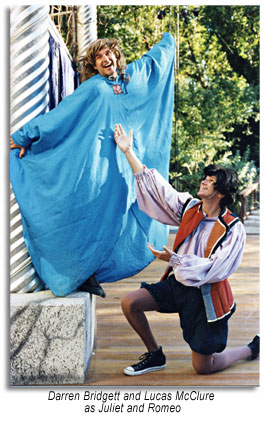 Off-stage kudos go to a design team who assembled the oft abused costumes and props, to the running crew who kept the dozens of quick changes looking seamless and relaxed, and to director Robert Currier who has never shied away from a cheap joke, a goofy sound cue or anything funny bordering on bad taste. And the grand result: Wow!
– Lesley Currier

From the Playbill:
The Complete Works of William Shakespeare (abridged) is perhaps the most successful original piece of theatre ever created in Marin County. First performed at the Novato Renaissance Faire in 1981, it has continued to be updated by the Reduced Shakespeare Company and enjoyed by audiences all over the U.S. and in London as three guys try to perform all of Shakespeare in under two hours with hilarious results.

“It is an amazingly, occasionally over-the-top romp that I have enjoyed working with immensely and accordingly I would like to dedicate this show to another amazing, occasionally over-the-top theatrical genius whom I enjoyed working with immensely for many years. Our founding set and lighting designer, tech director, and wizard Jim McKie died unexpectedly at his home in Fairfax on May 23, 1998. He would have been just 52 this year, the same brief span allotted to Shakespeare. Jim and I first put on shows back in the 60’s (….theatrical design, lights, building, engineering, painting, rigging, flying, special effects….) you name it, McKie knew how to do it and do it well. He set the standard for our luscious and complex sets which he felt this vast Forest Meadows stage called for. I will miss him immeasurably.”
– Robert S. Currier 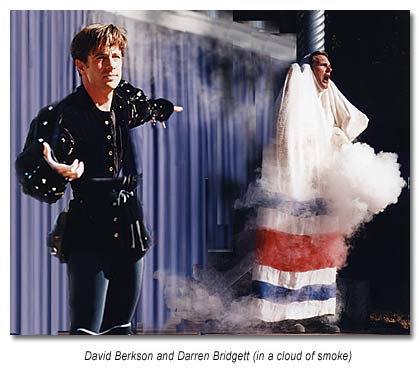 “It’s a feast of Good Will, a light but tempting treat that not only promises but proceeds to serve up just about the entire menu of the Bard. Be assured that every single play receives at least a nibble… Directed by the company’s artistic director Robert Currier, who milks every last irreverent drop out of this romp, the evening features the considerable talents of three young men in rather fetching tights and knee pads – David Berkson, Darren Bridgett, and Lucus McClure… Hamlet done backwards. It’s a real tour de force.”
– Roberta Floden, Marin I.J. 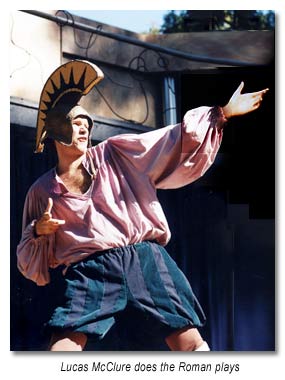 “…more fun than Shakespeare himself….For this fast take on the Bard’s life you don’t need to bring anything to the table but a willingness to go along with three likable performers (and one stuffed dummy) who will do anything to keep you amused.”
– Lee Brady, Pacific Sun 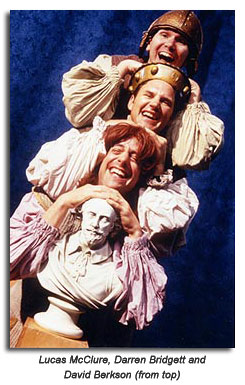 “Imagine, if you will, the greatest scenes from Shakespeare’s finest works –Hamlet and Romeo and Juliet, say – performed with pratfall perfection by the Three Stooges. Throw in the Marx Brothers, then add a tad of Tommy Smothers’ world-class whining. You will have The Complete Works of William Shakespeare (Abridged)….The uproarious Marin Shakespeare Company production, performed by the zany three-man team of Lucas McClure, David Berkson and Darren Bridgett, is not only brilliantly written, it is flawlessly executed – to everyone’s delight.”
– Mary Connell, Novato Advance