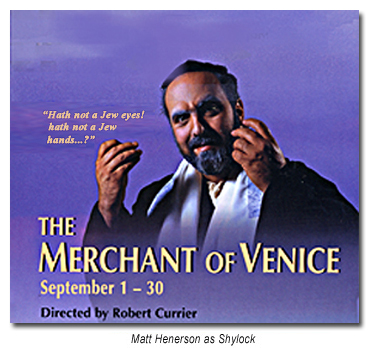 This is a controversial play. It has been used by anti-Semites, including the Nazis, to portray Jews in a poor light. Many people wonder if this play should ever be performed again. When we set out to do it, we knew we would need to provide forums for community discussion. We ended up hosting a symposium on the play at the Osher Marin Jewish Community Center in San Rafael; the panel included the play’s director Robert Currier, Matt Henerson who played Shylock, a Rabbi, Sister Samuel, and an Episcopal minister with a deep interest in the holocaust. We had set up a hundred chairs for the event, but as we neared the time for it to start, we had to keep hauling out more chairs.

We ended up with more than twice as many attendees as we had imagined-about 200 people. The discussion was impassioned. Some audience members expressed the deep pain this production causes them. Our theatrical team shared very interesting information about the production history of the play. The religious panelists discussed the ethical issues it brings up. Ultimately, Robert Currier reminded us: we need to do this play, and talk about it, to remember the history of anti-Semitism, so that we can be vigilant about eradicating it from our future. Those of us who spend our lives with Shakespeare find it hard to stomache that he seems to share an almost unconscious anti-Semitism. We are heartened by his beautiful writing that humanizes Shylock and shows the pain anti-Semitism causes. And yet, the play remains problematic.

Because of the nature of this play, we felt it was imperative to set it in the historical era in which it was written. We would come to the same conclusion several years later with Othello. For us, presenting these plays, we felt we needed to show the racial hatred within the cultural context out of which it sprung.

Ultimately, we felt the production was extremely successful. Robert Currier’s goal was to show all of the characters as complex and multi-faceted. Shylock is a good businessman, a terrible father, a loving husband, a greedy soul.

The Christian characters are equally morally ambiguous. And there are so many questions the play presents. Does the Jewish daughter Jessica regret betraying and stealing from her father? How is she treated by the Christian community she joins? How do the Christian marriages fare after the two husbands break their wives’ trust by giving away their wedding rings? How does Shylock respond to the judgment of the trial that demands he become a Christian? 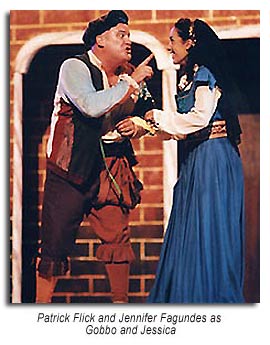 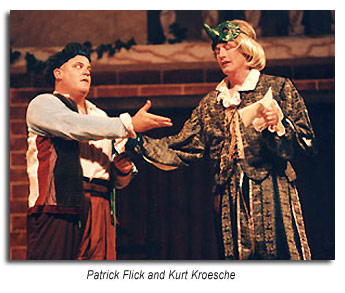 The production tried – and succeeded – in asking these questions, not in answering them. With five Equity actors, the largest we had ever included in our company, the cast was well up to the challenge.
– Lesley Currier

The history of the 20th century has rendered The Merchant of Venice Shakespeare’s most controversial play. A recent production in Israel was the cause of near riots. As we’ve discovered, some charitable foundations do not wish their name associated with even the study of this plays’ explosive issues. 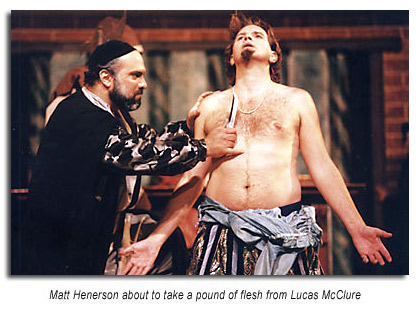 To stage literally Shylock’s abuse at the hands of his Christian neighbors – who spurn him, kick him and spit in his face – lays any contemporary production open to charges of anti-Semitism and comparisons to the holocaust. At the very least, Shylock’s plight makes audiences uncomfortable. If Shakespeare considered it a comedy, it is certainly one of the darkest in his Folio. So why did our Immortal Bard write it? Could his motive have been crass commercialism? You bet! 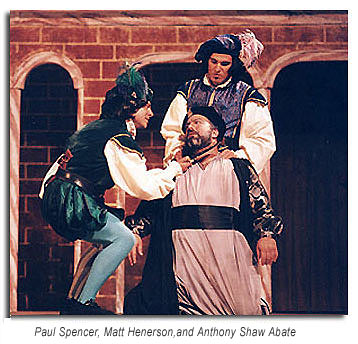 Anti-Judaism was big box office in 1590’s London…Marlowe’s Maltese villain, appropriately named Barabas, the thief who went free while Jesus was crucified, was rotten to the core, monstrously murdering and gleefully dismembering Christians at every turn…But Shakespeare was Shakespeare and one can imagine the wheels turning in that famous balding pate as he created Shylock: a Jew certainly, and therefore a pagan, a miser and practicer of usery admittedly, officially condemned by the Church of England although undoubtedly practiced in a thriving town like London. 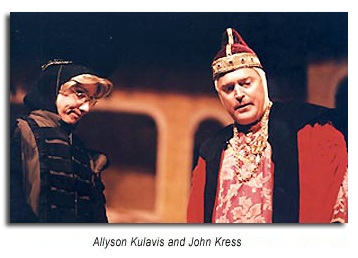 Furthermore, he hates Christians. It would be easy to lay it on with a trowel and create another Barabas. And Barabasspelled Box Office. But he just couldn’t do it! ‘Hast not a Jew eyes?…if you poison us do we not die?’ Perhaps before he knew it, a complex and not wholly unsympathetic multi-dimensional character had emerged.”
– Robert Currier

” Henerson’s Shylock is a very human, embittered one, proud of his heritage and his business acumen, and fervently desiring justice…So much is clear in this production in its exposition of story, character and meaning.
– Ken Bullock, Marin I.J.

“How ironic..that a work with such formidable drawbacks should prove to be one of Marin Shakespeare’s most impressive productions I have seen since the company began performing in Dominican University’s Forest Meadows Amphitheater.. All the elements of good theater are present. Ken Rowland’s handsome two-story set…Costume designer Pamela Johnson contributes authentic-looking period clothes that are enhanced by Bruce Lackovic’s creamy lighting. Original music by Billie Cox helps establish the atmosphere…But it is the impressive group of principals, directed with panache and originality by Robert Currier, who make the show really memorable. Allyson Kulavis offers a cleanly delineated interpretation of Portia…Bassanio is sympathetically presented by Jason Heil…Patrick Flick comes close to stealing the show as the scatter-brained Launcelot Gobbo..He later also appears as one of Portia’s suitors, the prince of Aragon, galloping about the stage in a hilarious display of Currier’s comic staging. And then we have Shylock…[who] works beautifully.”
– Charles Brousse, Marin I.J.

“Everyone seems so comfortable in their roles that their Elizabethan English just rolls off their tongues as if it were the most natural way to speak. Matt Henerson is perfectly cast as Shylock…Overall, the entire ensemble delivers a professional and well-acted performance…Nestled among the trees, whether under the sun or the stars, the Forest Meadows Amphitheatre on the Dominican University campus seems an ideal location for this production that requires the actors to enter and exit stage left through the audience, drawing you in to their every move.”
– Carol Burton, Tiburon Ark

“Henerson invests his Shylock with the towering rage of a wronged patriarch.”
– Olga Azar, Marin Scope 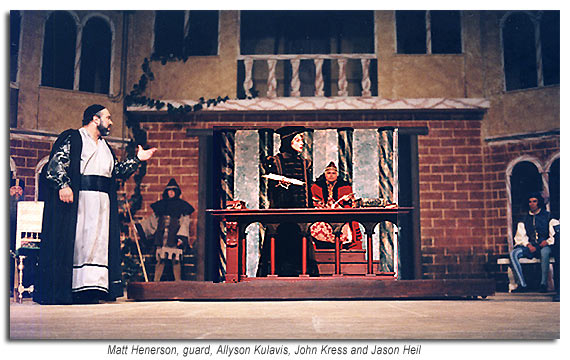 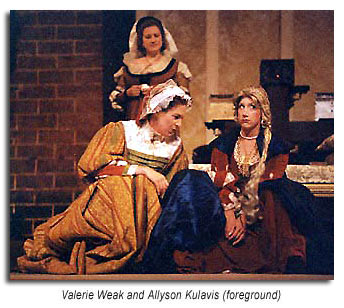 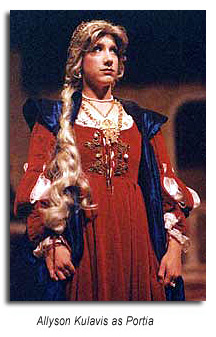 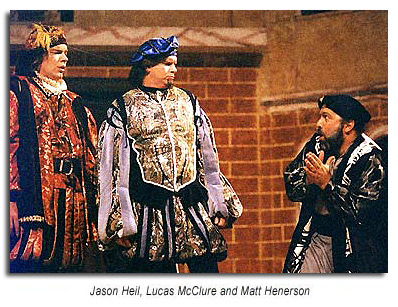