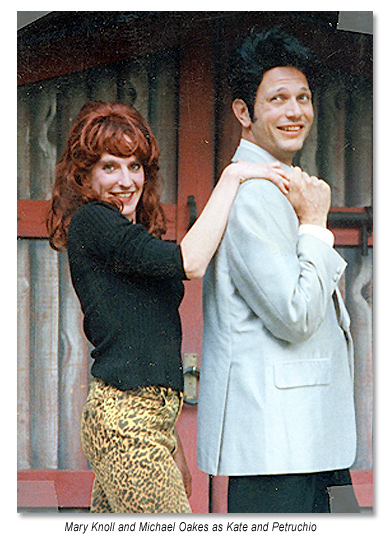 We’ve had a lot of pure fun with many of our productions, but this one was one of the best. It was such an outrageous adaptation that it probably shouldn’t have been called The Taming of the Shrew. We had seen a brilliant Shrew set in the 1950’s at the National Theatre in London, and realized how well that era worked with this play about a nascent women’s liberation in an age when ladies were expected to be “nice.” We had also been astounded by an amazing TV show, The Singing Detective (which is one of the best things ever created for television) where characters break into song and dance numbers that illuminate their subconscious. Somehow, we put the two together and came up with this be-bop Shrew where large chunks of text were eliminated and replaced seamlessly with pieces of rock-and-roll songs.”

Petruchio was Elvis Presley (breaking into “Hardheaded Woman” upon hearing about Kate.) Kate was Leslie Gore (“You Don’t Own Me” was her response to Petruchio and “It’s My Party and I’ll Cry if I Want To” came out after she was stood up at her wedding.) Other characters took on the personas of Buddy Holly, the Big Bopper, and Groucho Marx. All of the place names became Californian – Verona became Pomona, and one of our favorite lines was: “a mighty man of Lodi.” The incredibly knowledgeable Al Stewart (of “Year of the Cat” fame) had just moved into the neighborhood and was enlisted to help with the musical choices.

Somehow we convinced an awesomely hip choreographer, La Tonya Watts, to teach our cast a huge number of hot dance routines. The show opened with a stage full of dancing to “Whole Lotta Shakin’ Goin’ On” – a not too subtle Shakespearean reference. We ended with another, “All Shook Up.” 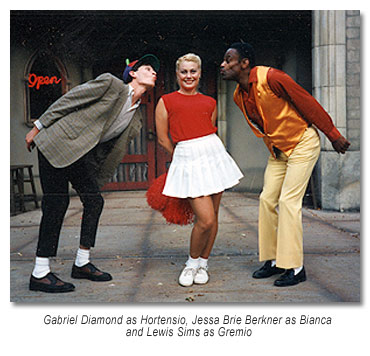 The audiences were agog. Each night we thrilled to the sight of hundreds of people realizing they were not seeing another stuffy Shakespeare production, but something entirely different and unexpected. It was one of those shows where we were afraid people would hurt themselves by laughing too hard..

Some of the critics did not appreciate our wit. The Independent Journal review elicited four or five letters of rebuttal which were published, along with the critic’s response, over the next two weeks. The Taming of the Shrew was certainly one of the most outrageous Shakespeare productions we’ve ever created.

I have chosen to emphasize that Shakespeare’s story is a play within a play to give even clearer perspective on the subtlety the bard brings to the folk-motif image of a man who tames a wife. The story is set in a modern era to make the characters more familiar – real people with real feelings and complex motivations – and the play more fun. So return now to the early days of rock-and-roll and ‘them’ restaurants. The setting is Ye Olde Castle Bowl in Bakesfield, California some 40 years ago, an era, according to James Brown, when it was ‘a man’s world’ for the last time. Be bop a lula!” 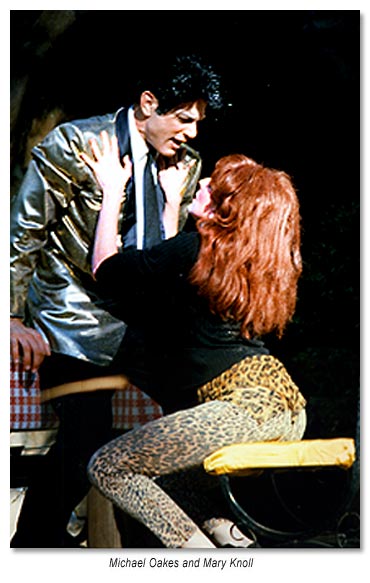 “Marin Shakespeare Company has mounted a boldly clever production of The Taming of the Shrew that accomplishes the difficult task of preserving the play’s basic integrity without endorsing misogynistic brutality. Along the way, the audience is even treated to a fair amount of fun. Set in the 1950’s era of bowling alleys, jukeboxes and motorcycle-riding tough guys, this seems like a Shrew of a different species. But, the plot and dialogue remain largely untouched, albeit accented quite nicely with bits of rock music.” Patrick Sullivan, Pacific Sun

“You just have to give in to it. Marin Shakespeare’s production of The Taming of the Shrew is loyal to the play’s theme of total obedience, full of gimmicks, and merciless in converting Shakespeare’s language into 1950’s musical numbers. It’s also one of the most successful modern adaptations of Shakespeare that I have ever seen….This Taming of the Shrew is a bold unapologetic suitor, and we would be foolish not to submit. Chrisanne Beckner, Commuter Times

“Marin Shakespeare Company’s rock-‘n’-roll version ofThe Taming of the Shrew is more akin to 20th century Elvis than the 16th bard. These two celebrities have little in common, but the mixture of Shakespeare’s plot ideas with the music of Elvis at Forest Meadows Amphitheatre is very funny. The action takes place in Bakersfield, California. Lodi, Frisco and the names of other towns continue to draw laughs in this production, no matter how many times they are mentioned. Familiarity breeds joy….Although I missed the language of Shakespeare and am no fan of rock-‘n’-roll, I enjoyed the play and the music. Young music enthusiasts should adore this production.” Bess Davoren, Tiburon Ark

“Set in Bakersfield in the 1950s, the shrew in question is a tantrum-happy vixen, a sex-kittenish bad girl clad in tight leopard-skin slacks and with tall, tall hair played with oodles of cheek by Mary Knoll. She is startlingly similar to Pinky Tuscadero – the only irregularly recurring character on ‘Happy Days’ spunky enough for Fonzie to take seriously as mate material….Throughout the play, the actors break into lip-synched performances to recorded rock ‘n’ roll
numbers that are lyrically relevant to the action….The highlight of the night is when Mary Knoll as Katherine, the shrew, interrupts the taming process for one final show of resistance. She breaks into a campy rendition of Dusty Springfield’s whiny anthem ‘You Don’t Own Me’….This rockin’ protest that ‘You Don’t Own Me’ is the perfect retort to Petruchio’s avowal that he does. He states: ‘I will be master of what is mine own: She is my goods, my chattels; she is my house, my household stuff, my field, my barn, my horse, my ox, my ass, my anything..’ Who wouldn’t break into Dusty Springfield’s song after listening to that?” Erika Milvy, Santa Rosa Press Democrat 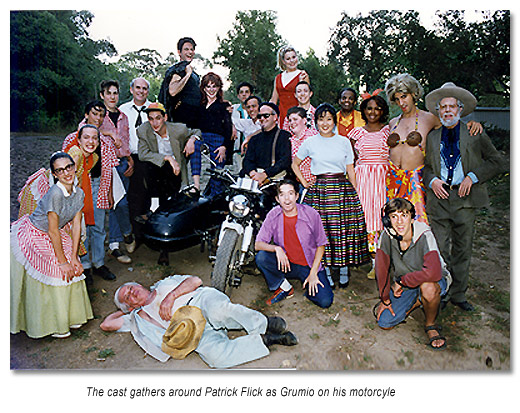 “It may be because it’s a Marin Shakespeare Company production and that it has the title of one of Shakespeare’s most enjoyable comedies,The Taming of the Shrew, but, it is barely Shakespeare….only a thin veneer is recognizable as the work of The Bard….Currier retained nothing more of the play than the surface situation. He then proceeded to wreck havoc with what little he kept….At the slightest provocation, some early ‘50’s rock ‘n’ roll record intercedes, and the caricatures on stage start moving their hips, playing air guitars, and mouthing the words of the songs….Predictably, many in the audience opening night couldn’t get enough of it. Except, I suspect, for those like myself, who came to see The Taming of the Shrew and not Taming of the Shrew: The Musical. What’s going on at the Marin Shakespeare Company?” Roberta Floden, Marin Independent Journal

“Talk about a Tempest. First there was the August 21 Roberta Floden review of the Marin Shakespeare Company’s production of The Taming of the Shrew. Next came a flood of letters chastising and challenging Floden’s review. On Aug. 31 theIndependent Journal’s Lifestyles section featured some of the readers’ letters and a response from
Floden. That give-and-take ignited a second round of letters….”Marin Independent Journal