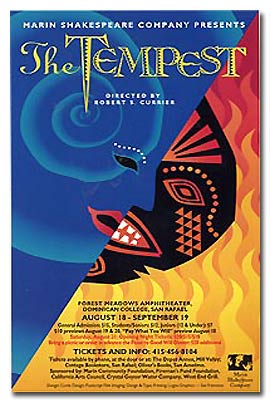 For Robert Currier’s second production, he chose Shakespeare’s final play, the magical romance The Tempest. The play was set when it was written, in the early 1600’s, with the visitors to Prospero’s isle dressed in Jacobean costumes. The island itself was imagined to be off the coast of West Africa and its inhabitants were all African, with magic created by African drumming and dance. To assist with the production, we found the marvelous Danny Gorlin, an Ewe drum master from West Marin, and Gael Thompson, a delightful African dance teacher.

Jim McKie once again designed a spectacular set. A tall mast was rigged to plunge to the stage during the opening shipwreck scene. It only failed once during a performance (when the actors – who must have been horrified to have a huge beam of wood fall in the wrong direction – coped beautifully.) The set itself was a jagged coastline with a tall mountain stage right, which held Prospero’s cave. Ariel made her first appearance onto the stage flying on a wire rigged from a huge Eucalyptus tree behind the tech booth onto the mountaintop. Caliban’s first entrance was equally spectacular, as he emerged from under the lip of the stage, splashing through the moat, and occasionally wetting audience members sitting in the front-row. 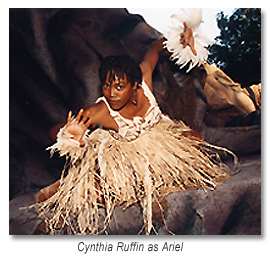 We were thrilled to engage one of our favorite Bay Area actors, the intriguingly quirky and physically gifted Howard Swain, as Prospero. Howard, whose wife Nancy Carlin had played Rosalind for us in our first season, became a father shortly after the production closed and the second Carlin-Swain daughter was named Miranda. Cynthia Ruffin was an African goddess of an Ariel. Len Pettigrew, a former professional football player with the Philadelphia Eagles, took on his first theatrical acting job playing Caliban. His natural combination of sheer power with an underlying sweetness combined with a certain naiveté about Shakespeare and theatre worked perfectly, and he was directed less as a monster than as a potentially noble savage. 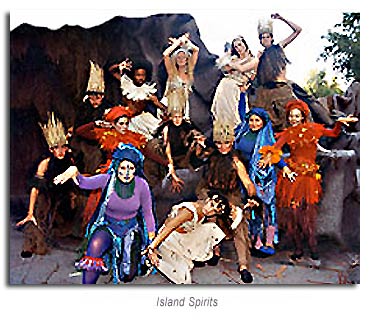 “Each summer as we reinhabit Forest Meadows our elder son Jackson takes to the woods like a savage young Caliban. He knows ‘all the qualities o’ th’ isle’ and can ‘pluck thee berries, show thee a jay’s nest and get thee wood enough.’ This year he decided to dig for treasure on a ridge just off upstage left. The ground is hard and he had just scratched the surface when he uncovered an almost perfect obsidian arrowhead, the first we’ve discovered in four seasons of rooting around building sets and creating magic effects. An omen? Certainly a vivid reminder that Columbus didn’t discover this continent 500 years ago, but merely introduced it to Europeans. Shakespeare was a cultural descendent of those early explorers and a contemporary of Sir Francis Drake himself. He certainly had the Jamestown expedition – which ran aground in the ‘still vexed Burmudas’ in 1609 – on his mind when he set down this tale. And we are the heirs of that same colonial legacy which has molded America from the Revolutionary War through the Civil War until today. 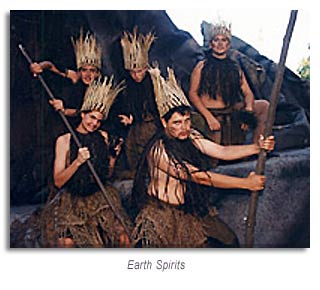 So we can look at The Tempest as a reassessment of the European impact on the indigenous peoples of the new world. We can see Prospero as a conquistador / colonialist and Ariel and Caliban as enslaved nations whose autonomy has been overwhelmed by European technology (i.e. magic.) And we have set the mythical isle somewhere between West African and the West Indies, peopled with native spirits who create their magic through dance and song and ‘noises, sounds, and sweet airs that give delight.’” 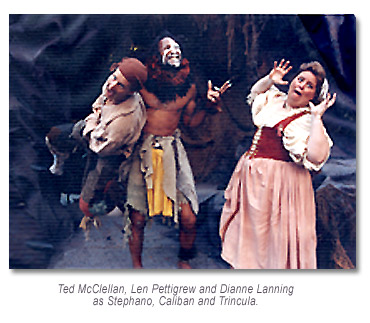 “The Marin Shakespeare Company has taken on the challenge of performing the play with their usual enthusiastic no-holds-barred production style….audiences will be treated to such dramatic surprises as Ariel, the spirit who makes her ethereal introduction by floating 200 feet above the stage; Caliban, the island native who roams the stage played by 6-foot, 3-inch, 230-pound ex-professional football player Len Pettigrew; and an ensemble of colorfully costumed dancers whose movements are choreographed to modern jazz dance style with African folk dance inflections. Although the company is young, it is already considered on a par with the stately Shakespeare festivals in Santa Cruz, Orinda and San Francisco.” 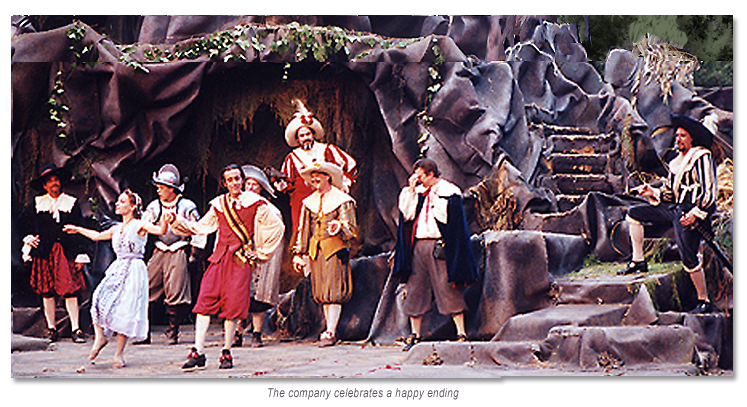 “Once again the Marin Shakespeare Company has turned the stage and natural setting of Forest Meadows into a magical land full of marvel and illusion….The stage itself has become a rocky headland of grassy crevices, pinnacles and caves surrounded by the water-filled inlets of a great ocean. Borrowed to good effect is the rest of Forest Meadows, providing the dusky, star-filled sky, the cool breezes, the eucalyptus trees and the evening’s creatures….Entertaining and often amusing, it is also full of music and dance; choreography (Gael Thompson), original music (Bruce Gehrke, Dana Mandell), and live drumming (Dan Gorlin) add an enticing dimension….the play is very accessible to young and old alike.”Roberta Floden, Marin Independent Journal

“A magical Tempest. It’s hard to imagine that there could be a setting more magical for Shakespeare’s The Tempest than Forest Meadows at Dominican College. It is even harder to imagine a finer set than that created for the Marin Shakespeare Company….Or a more creative use of that set. This is an exquisite Tempest, one set apart by its richness of color and choreography, and its original musical score and live drumming.” Novato Advance 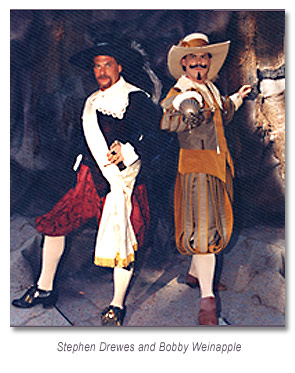 “Director Robert Currier’s The Tempest, produced by the Marin Shakespeare Company at Dominican College, is fresh and vigorous in large part because of his political alertness and psychological insights….In this lavish production (a towering velvet-textured tropical mountain, gaudy and imaginatively ethnic costumes, drummers, dancers, gorgeously extravagant sound effects, and a high wire along which Ariel arrives), a new age does seem primed to dawn….Caliban is invested with an extremely sympathetic, rational point of view by the actor and former star athlete Len Pettigrew…Cynthia Ruffin gives Ariel, too, another point of view, and it is amusing to watch her assessment of character and situation, reacting with an elegant arching of an eyebrow or twitch of the corner of the mouth, obviously possessing an intelligence and perspective far advanced from those she observes….Another good touch is the interpretation of Prospero, as played with a great deal of intelligence and relish by Howard Swain….a cohesive and startling production.” Julia Hawkin, The Gazette 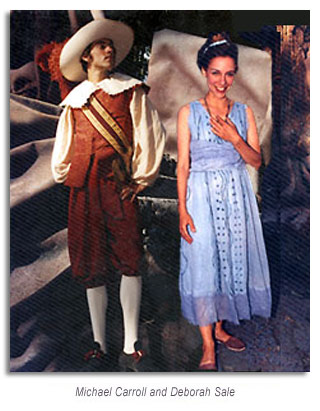