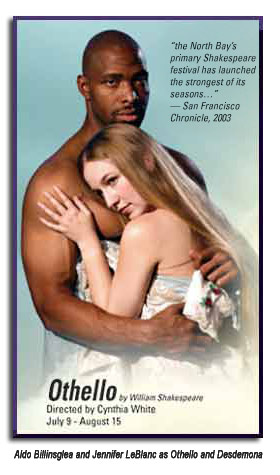 Othello is one of the Shakespeare plays for which you want to cast the title character before adding it to the season line-up. We had seen Aldo Billingslea at a Theatre Bay Area general audition, and immediately began talking with him about whether he might be interested in playing the role at Marin Shakespeare Company. Aldo was busy; he lived and taught in Santa Clara. Finally, we caught up with him at a bar in Ashland after seeing him in a stupendous production of August Wilson’s The Piano Lesson at the Oregon Shakespeare Festival. Like many great theatrical ventures, this production was born over a few rounds of cocktails. Despite the commute from Santa Clara, despite having a young daughter and needing to complete his application for tenure at Santa Clara University (awarded in 2005), the role compellingly beckoned.

Aldo suggested we consider hiring Cynthia White as the director. Cynthia had served as Dramaturg and Director of Play Development at Ashland, where she worked and directed plays for eleven years. During that time, Lesley had been a volunteer playreader for Cynthia’s new play reading series while part of the acting company in 1987. Cynthia was already on our short list of directors we hoped to work with one day, and Aldo’s endorsement was a welcome suggestion. 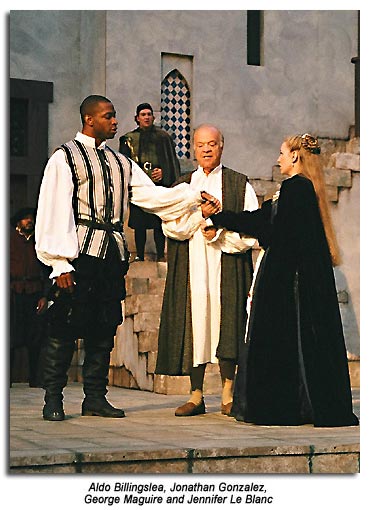 We decided to set the play in its historical period and engaged a knowledgeable dramaturg, Laurie Glover, a Renaissance Studies professor at U.C. Davis, who spent hours in rehearsal helping the cast understand the details of Venetian culture and Renaissance life which Shakespeare refers to throughout the play. 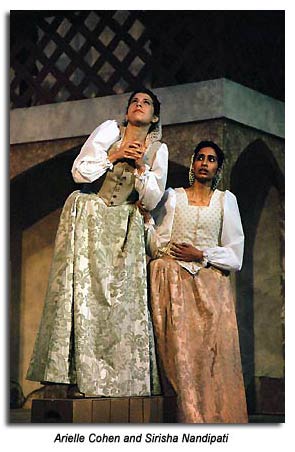 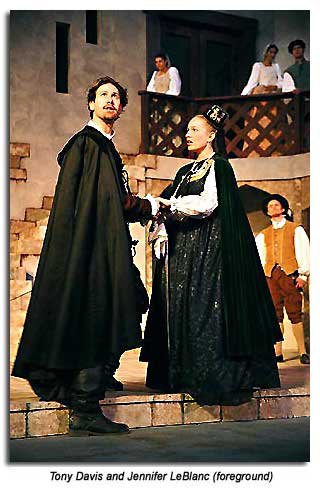 The production was muscular, clean and clear. For honest Iago, Cynthia chose the exceptionally likable Paul Sulzman, eschewing casting an actor who would appear from the start as a villain. Cynthia was particularly interested in the women in the play, and Deb Fink as Emilia and Jen LeBlanc as Desdemona both created strong, independent characters full of depth and humanity. There were no victims, and even Iago seemed overwhelmed by the scope of the mischief he had caused by the end of the play. In the year of its 400th anniversary, Othello continued to fascinate. 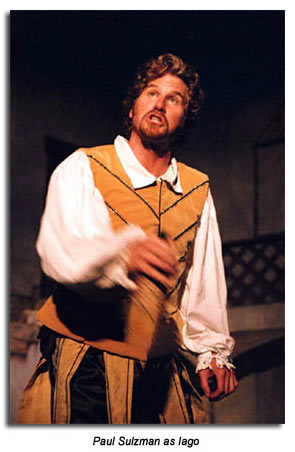 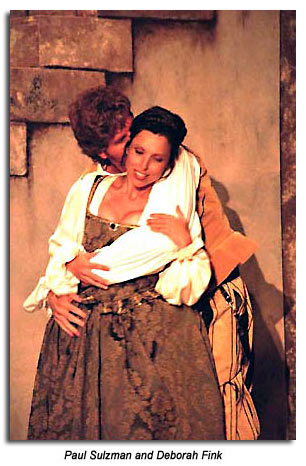 One exciting outshoot of the production was Aldo and Paul’s overwhelming generosity in giving of their time to become involved with some of our new outreach programs. The actors visited a summer camp for mostly African-American youth from Marin City who were studying and performing Shakespeare for the first time. And they joined Education Director Jonathan Gonzalez and inmates at San Quentin prison in performing an evening of scenes from Shakespeare, the culmination of Jonathan’s 10 months of teaching Shakespeare behind bars. 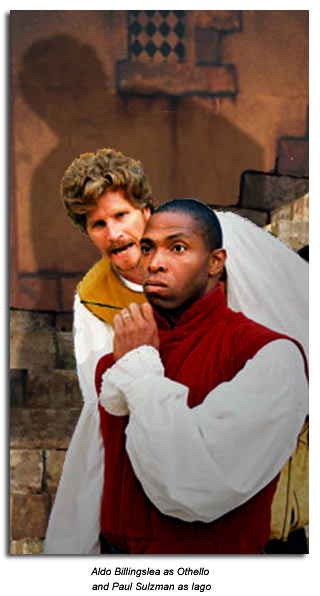 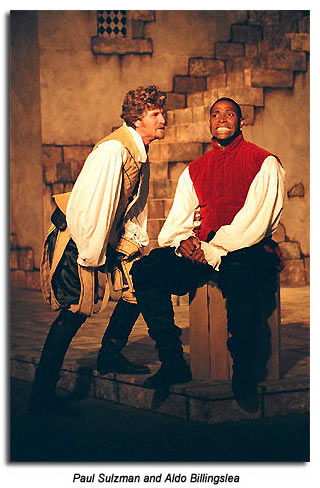 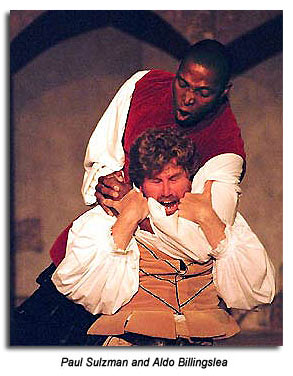 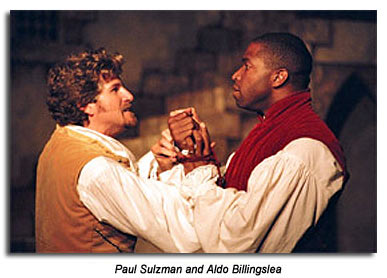 Othello, the Moor, a foreigner in sixteenth century Venice, comes home in some deep spiritual way when he meets and falls in love with the pure, lovely and charming Desdemona. Othello has traveled the world and left his homeland far behind. He has been an outsider in other cultures for many years, working as a professional soldier. These foreign cultures may pay him tribute and give him accolades, but Desdemona invites Othello into her heart. How in the world do we get from here to Othello’s murder of Desdemona three days later? …. 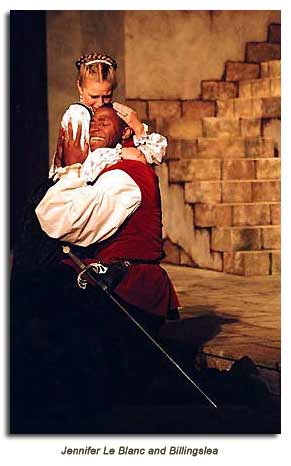 Enter Iago. We the audience feel we know Othello the Moor despite his otherness which we deem superficial. But Iago is the quintessential unknowable. Why does Iago set out to destroy Othello? He gives a myriad of reasons, any of them true or false at any given moment. One might as well ask why there is evil in the world. And yet, of course, Iago’s evil is totally shrouded in his sameness: he is a member of Venetian society, the kid next door, the honest and loyal friend, the one Othello trusts to escort his wife to Cyprus. 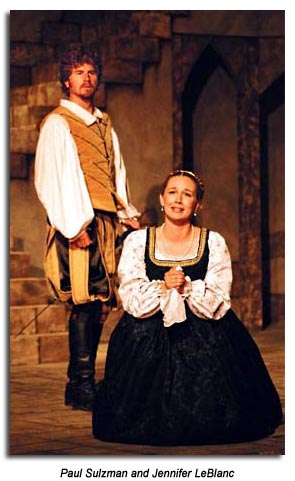 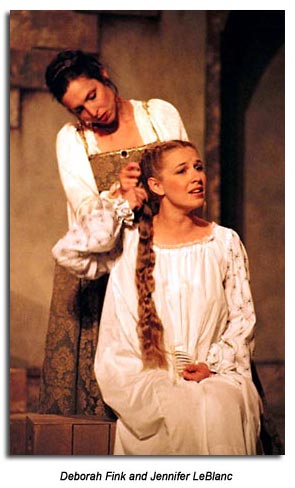 Our production of Othello is set in the sixteenth century at the time when Venice ruled in Cyprus and was fending off the Turks in military combat. I’ve chosen this traditional setting in order to explore the meaning of otherness in the context that Shakespeare created for us. Current events resonate strongly for me in this story, but I leave the drawing of parallels to you.

“In director Cynthia Whiteís new production of Othello, one of two shows that opened the 2004 Marin Shakespeare Festival in San Rafael, the issues are presented sensitively enough, with a first-classOthello played by a mesmerizing Aldo Billingslea. But this is a production that embraces Othello for what the Bard most likely intended it to be: a grand, slightly dirty soap opera, and a white-knuckle thriller packed with enough lies, heartless plots, accusations of infidelity and incidents of spousal abuse to thrill the very heart of Jerry Springer. It’s Shakespeare meets the Young and the Restless, and it’s the most entertaining production of Othello you are likely to see.”
David Templeton, North Bay Bohemian 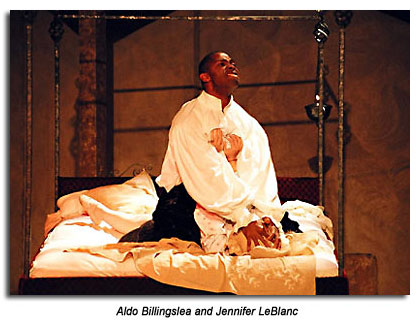 “In Othello, Aldo Billingsleaís beautifully thought-through performance in the title role makes sense of the Moor’s fixation on the heirloom handkerchief he’d given his wife – no mean feat.”
Robert Hurwitt, San Francisco Chronicle 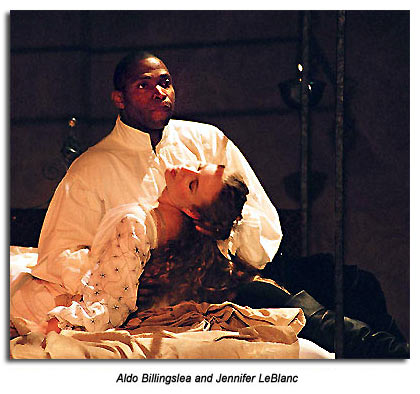 “Marin Shakespeare Company’s Othello, directed by Cynthia White, takes a straightforward approach to the drama for what is, overall, a brilliant taste of pure Shakespeare…The drama is powerful, and is matched by powerful performances. Aldo Billingslea adds depth and nuance to his Othello… Paul Sulzman grows into the role… As engaging as the male actors are, the women outstrip them in energy and verve. Jennifer LeBlanc invests Desdemona with the right balance of girlish glee and womanly modesty… A standout is Deborah Fink as… Iagoís admonished, suffering wife… Still, this Othello is riveting, the passion of the characters and the actors blending into that rare thing: naked, primitive vulnerability that involves those in the audience to the point of seeing the same in themselves.”
Olga Azar, Marin Scope 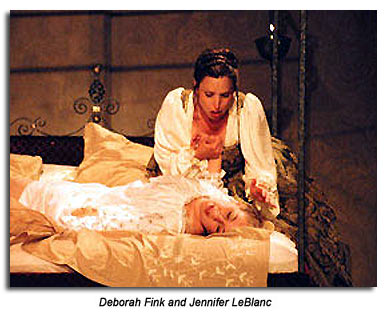 “a commendable departure from the Shakespeare short list….this may go down as the company’s most eclectic and adventurous season yet.”
Charles Brousse, Marin Independent Journal 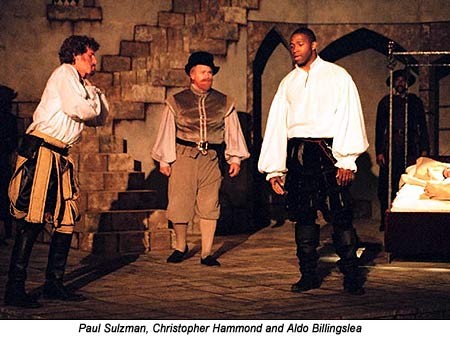 “Indeed, falling in love can be far more risky than going to war. There are no clear rules of engagement. You’re never even sure who the enemy is. You suddenly find yourself walking through a minefield, stepping lightly over tripwires, trying to maintain a very precarious balance.”
David Kashimba, Joint Forces Journal 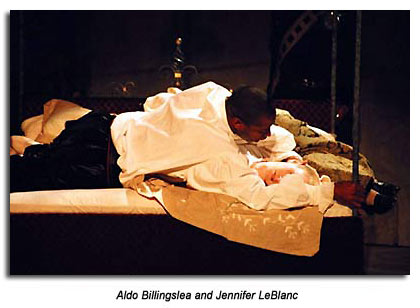 “A strong cast and tightly paced direction by Cynthia White create a memorable vision of this seldom-seen tragedy.”
Rosine Reynolds, The Tiburon Ark

“Coming off perhaps their most varied and artistically successful season last summer, Marin Shakespeare’s opener for this year, Othello, gives promise of rivaling their own accomplishments , or building on them to give us something more. Robert and Lesley Currier, Artistic and Managing Directors , should be congratulated for their ongoing development of the Festival through building a company and attracting guest actors and directors of note, giving us every year a greater range of interpretation of the Bard, and of other theatrical delights from the golden age of European drama.”
Ken Bullock, Commuter Times 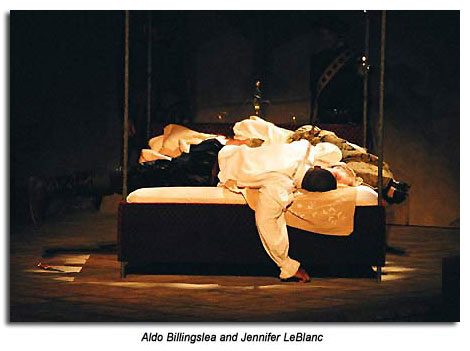 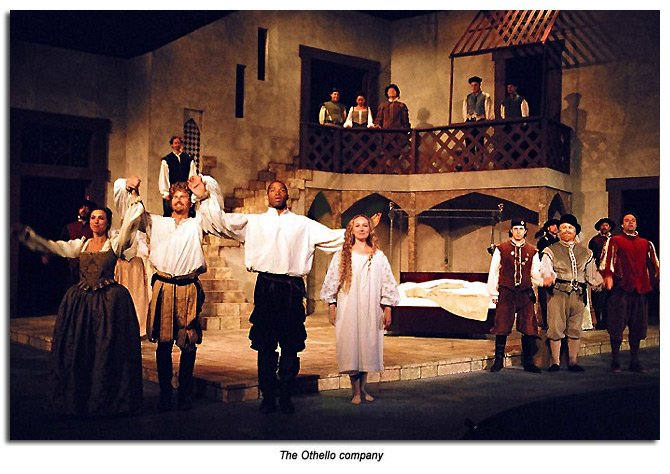 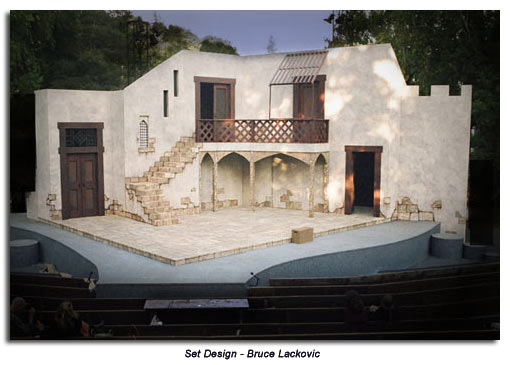