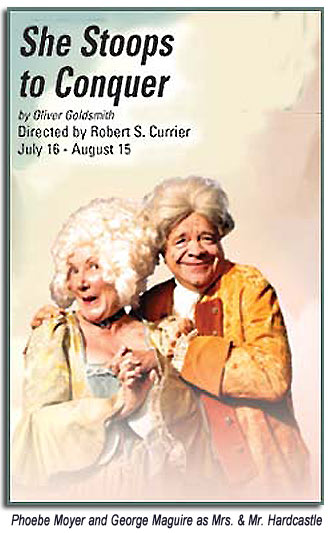 Whether you consider it very late Restoration or very early modern, She Stoops to Conquer must be considered a classic. Just about hitting the midpoint between Shakespeare and today chronologically, Goldsmith has given us a rarity – a comedy that, like Shakespeare’s comedies, has withstood the test of time.

Why choose a drawing room comedy for an outdoor Shakespeare festival? To give our audiences and ourselves the exquisite pleasure of watching Darren Bridgett play the bumbling Young Marlowe, of course! One of the benefits of a play like this one is its relatively small cast, and Darren was superbly accompanied by a dream cast (of almost entirely professional Equity principals, by the way.) Set Designer Bruce Lackovic once again rose to the challenge of creating a set so versatile it could double for two vastly different plays, thanks in no small part to a large changeover crew. The drawing room curtains did not blow in the wind, and Bob Currier’s delicately choreographed moving forest was a highlight of the staging.

We were delighted to ‘discover’ the delectable George Maguire, a veteran actor and director, who was perfectly cast as Mr. Hardcastle, playing opposite Marin’s own Phoebe Moyer, who was born to play Mrs. Hardcastle. Deborah Fink and Paul Sulzman showed admirable range, going from the intensity ofOthello into wonderfully funny and fun characters for She Stoops. And Jonathan Gonzalez stormed the stage as the bumbling, snot-nosed, spoiled, mischief-making but, of course, adorable Tony Lumpkin.

This production was a true delight, a sweet concoction of Goldsmith’s sly language and lovable characters played by an accomplished cast to the tune of Billie Cox’s witty score. 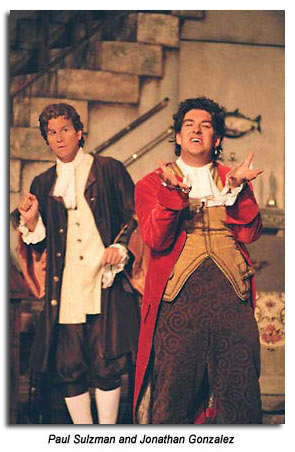 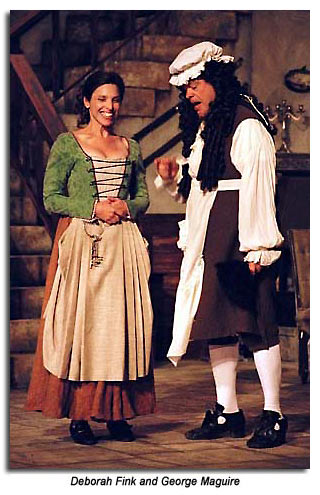 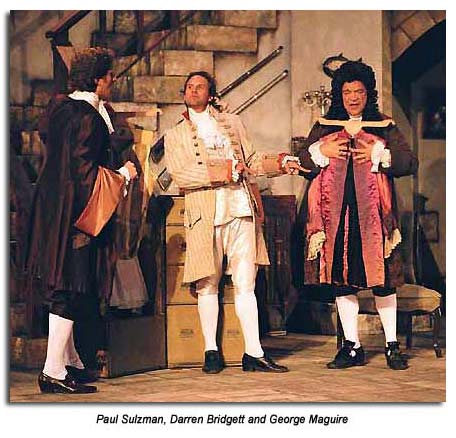 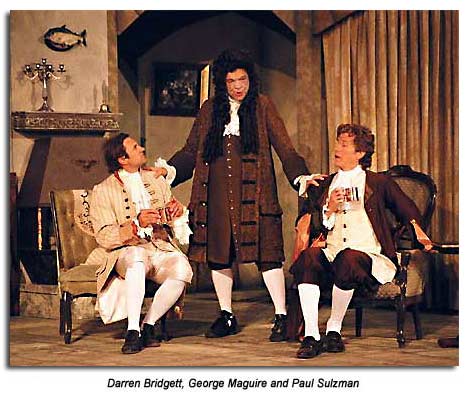 Goldsmith, a man whose life was lived in disorder, was born of a large impoverished family. He studied unsuccessfully for the clergy, law and medicine in Dublin, Edinburgh, Leiden and Padua. In 1756 his wanderings brought him to the London of Samuel Johnson, Joshua Reynolds, Edmund Burke and the great actor/producer David Garrick.

Goldsmith gained some success with the publication of an Enquiry into the Present State of Polite Learning in Europe. In 1764 he became a founding member along with Johnson, Burke and Reynolds of the Turk’s Head Club. By all reports he was an odd duck and like Johnson, a most unsightly man. In one sketch he appears to possess a skull not unlike a Neanderthal. But his tongue rarely failed him. 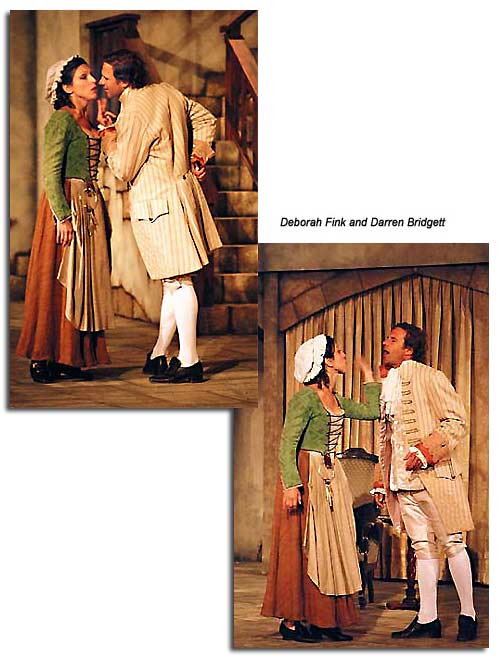 As the licensed fool of this great creative circle, the Irishman had finally found his milieu and for the last decade of his short failure-ridden life, he earnestly scribbled, along with all the hack work necessary to hold his creditors at bay, one successful novel, The Vicar of Wakefield (1766), one major poem, The Deserted Village (1770), and, in an era of sanctimonious, sentimental, instantly forgettable drama, an absolute comedic masterpiece, She Stoops to Conquer(1771.) Succeeding where even the prolific Dr. Johnson could not, Goldsmith flew in the face of convention and created a robust comedy, all farce and not satire, all humor and not mere wit. 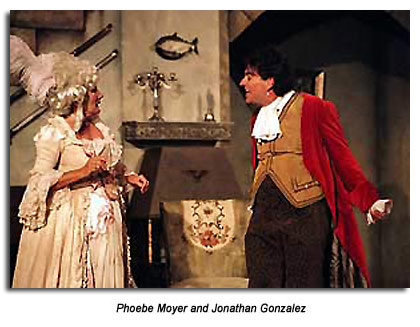 It was so daring, so ‘outside’ anything the 18th century had produced, that Garrick balked at producing it at Drury Lane even though the generous Dr. Johnson proclaimed it the greatest play of their generation. Finally, George Colman presented She Stoops in March 1773 at Covent Garden. It has been running in some playhouse ever since.

Goldsmith barely lived to enjoy his achievement, dying of fever and self-administered purgatives on Easter Monday, 1774. The scale of his debts led to a quiet burial. 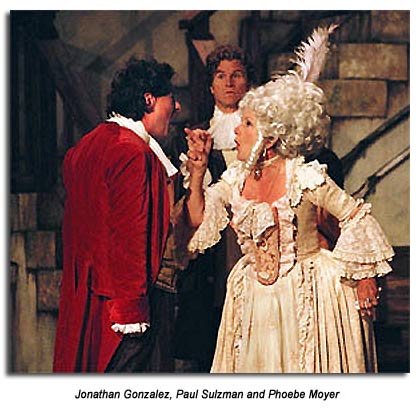 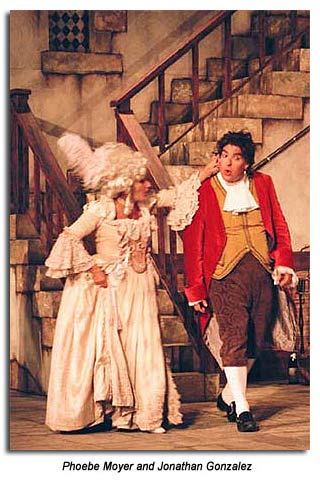 “Jonathan Gonzalez..is engagingly bumptious as [the] loutish half-brother Tony Lumpkin…But Bridgett and Fink take the comedy to richer, more rewarding levels in each of their scenes together – Fink charmingly, cagily responding to and exploiting Bridgett’s hilarious depictions of almost terminal shyness. Currier’s production may stoop too often for cheap laughs, but in Fink and Bridgett’s wooing scenes, it conquers.” Robert Hurwitt,San Francisco Chronicle

“They came, they stooped, they conquered. Seizing any opportunity to go for the delicisouly comic ‘low’ in Oliver Goldsmith’s ‘She Stoops to Conquer,’ the Marin Shakespeare Company stoops indeed. And it does so with all the wild abandon and studied grace of two lords on a wenching spree…superbly cast, with gorgeous period costumes and a solid, inventive set. Indeed, creative director Robert S. Currier more than lives up to his reputation as a director who is at his best when doing comedy…Forty-year stage veteran Maguire..is an absolute joy to watch onstage…Moyer, simply put, gives the joint some class…The comic tour de force of the evening, however, was Bridgett’s young Mr. Marlowe…Dick Van Dyke would have been proud. Fink is equally enticing …The rest of the cast performed admirably…‘She Stoops‘ is a thoroughly enjoyable evening of theatre.”
Mark Langton, Marin Independent Journal 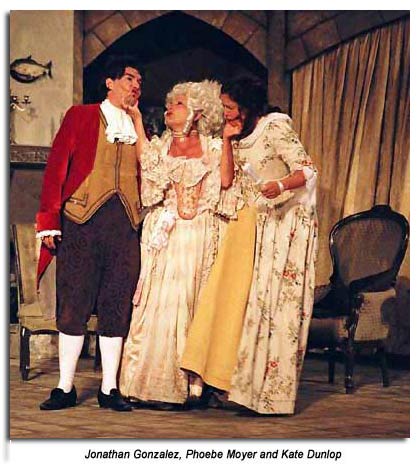 “It is another flavor of insanity entirely that runs the show in the delightfully staged She Stoops to Conquer…It’s ridiculous, yes, but it’s extremely well-done, and quite funny.”
David Templeton, North Bay Bohemian

“Oliver Goldsmith’s She Stoops to Conquerturns out to be the perfect summer entertainment after all…Bridgett’s performance is a delight throughout…As a director, Robert Currier loves physical comedy onstage, and in Goldsmith’s script he’s found a perect partner.”
Lee Brady, Pacific Sun

“A Comic Gem….Marin Shakespeare’s production of She Stoops to Conquer is a delight from the first bickering scene between the pretentious Mrs. Hardcastle (a delightfully pixilated Phoebe Moyer) and Mr. Hardcastle, (a foursquare, plain spoken and a tad rambunctious George Maguire.)…Beautifully paced, and acted with consummate skill by actors Phoebe Moyer, George Maguire, Darren Bridgett an an impressive supporting cast, She Stoops to Conquer continues to prove its wise and witty mettle.”
Gene Price, San Francisco Bay Times

“Both the mayhem and the giddy verbiage are under the strictest artistic control….a ballet of comedy.”
Ken Bullock, Commuter Times


“If you’re looking for a purely enjoyable comedy, She Stoops to Conquer, now playing at Marin Shakespeare Theatre in San Rafael, is just the ticket…what makes this production so thoroughly entertaining is it’s fantastic playful cast…Darren Bridgett…will bring tears of laughter to your eyes…Jonathan Gonzalez as the bad boy Tony Lumpkin is unforgettable…George Maguire…is a joy to watch…Deborah Fink is simply lovely…and Phoebe Moyer’s (Mrs. Hardcastle) feathered hairdo alone is worth the price of admission.”
David Kashimba, Joint Forces Journal 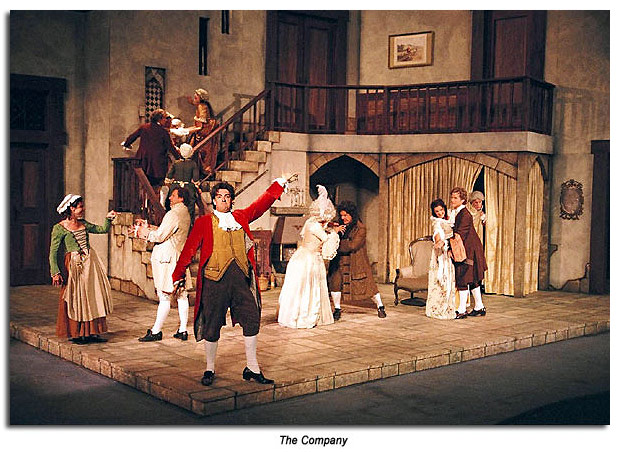 “She Stoops to Conquer is a Real Hoot….The audiences at the Marin Shakespeare Festival are rolling with laughter, thanks to the over-the-top slapstick acting of this marvelous cast….Once again, Darren Bridgett proves to be one of the Bay Area’s best actors….Bridgett brings down the house as he stumbles and pratfalls about the stage….George Maguire and Phoebe Moyer as the Hardcastles almost steal the show with their wonderful comedic performances….
Director Robert S. Currier keeps the action fast and furious and the timing of the actors is impeccable. Jennifer Kazmark’s costumes are perfect 18th Century dressings.”
Richard Connema, Talkin’ Broadway

“…a charming period piece replete with sumptious costumes, original direction and actors who are so comfortable in their roles they can veer from the script, for fun or convenience.”
Olga Azar, Pacific Sun

“She Stoops to Conquer is a big, fluffy marshmallow of a show and a lightly bawdy treat for the senses.”
Rosine Reynolds, The Tiburon Ark 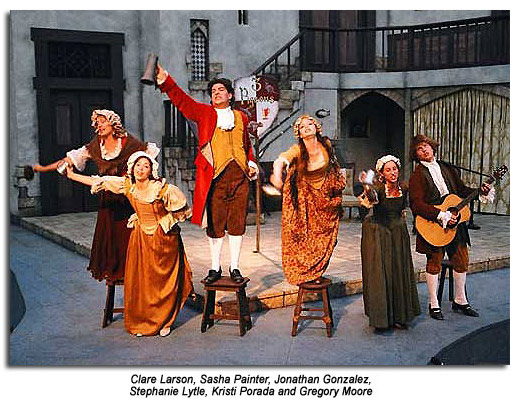 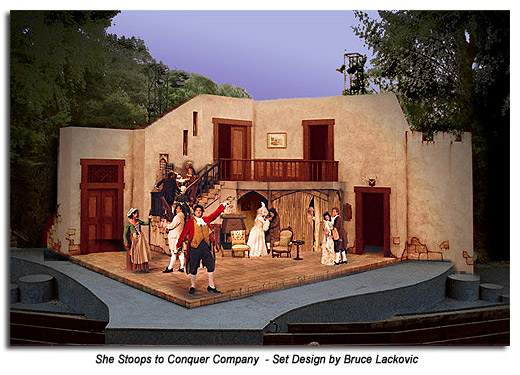 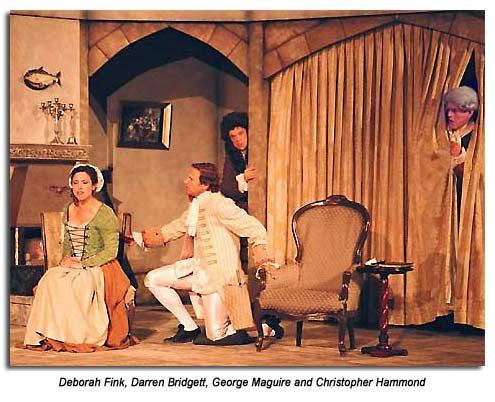