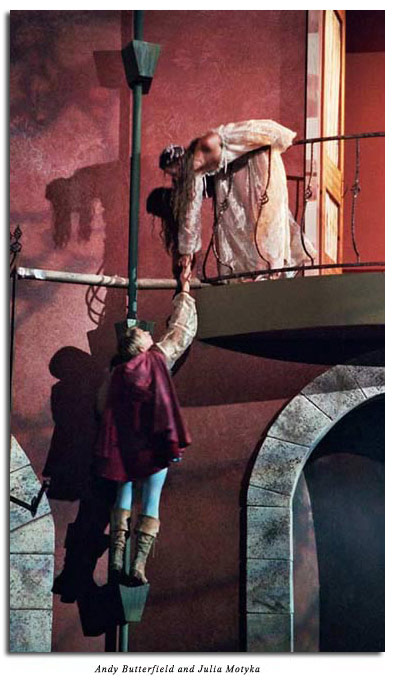 Most years, we reach the end of our long summer season having weathered mishaps, illnesses, bee stings, torn costumes, failing props and all the “slings and arrows” that can come our way as we strive to keep our productions fresh and full of passion for the three months of our performances.

2005 was no exception. Most years come the end of September, we heave a sigh of relief to have made it through another summer. 2005 was different. The sheer joy of running this gloriously cast, gorgeously costumed, high-octane production was something we just didn’t want to end. Alas, on September 25 Romeo drank the poison one last time, Juliet found his trusty dagger and we said goodbye to one of the most satisfying productions of our 16-year history. 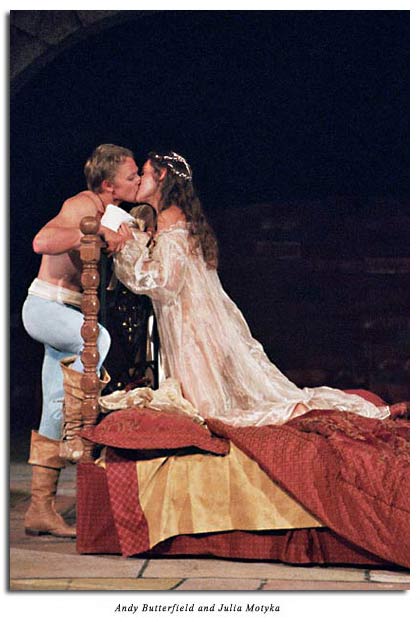 Romeo and Juliet lives and dies by its casting. This production was headed up by a couple of recently graduated American Conservatory Theatre M.F.A. actors Andy Butterfield and Andrew Fonda Jackson and the stunning, vivacious, multi-faceted Julia Motyka from New York City. We had a slew of handsome young men in tights fighting, drinking and climbing all over the set and falling in love. The young women were equally alluring and added an extra sex-drenched vibe to this most
sensual of Shakespeare plays.

We got off to a great start with the production, casting Bay Area Shakespeare legend Julian Lopez-Morillas as Lord Capulet.Julian helped prepare the script and his wisdom and deep knowledge was a beacon throughout. His portrayal of Lord Capulet was detailed and moving. The other “adults” in the cast were also perfectly cast: Linda Paplow as the Nurse and Michael A. Berg as Friar Laurence. 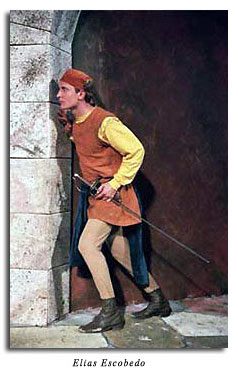 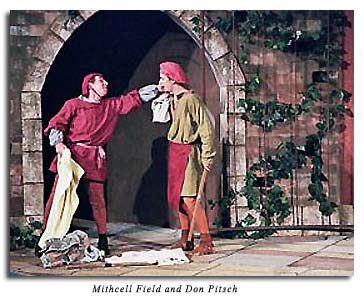 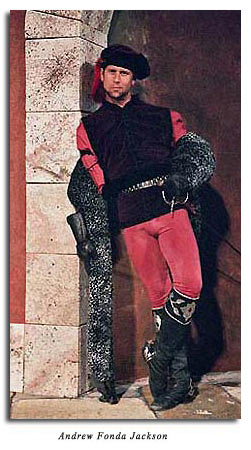 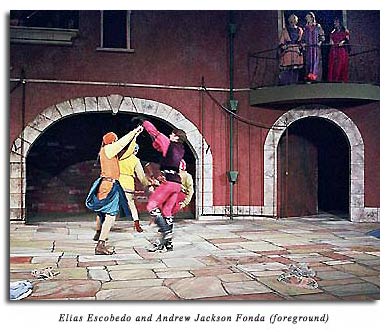 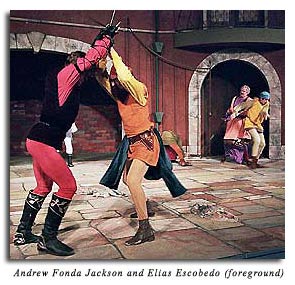 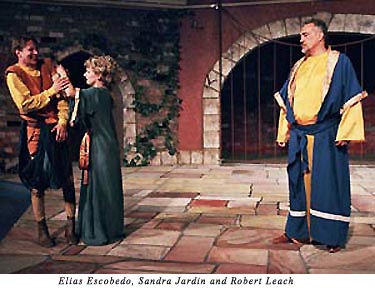 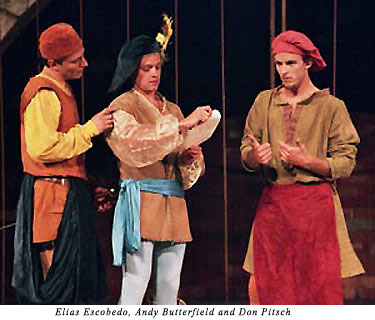 There were many highlights. Andy Butterfield’s athletic ascent of Juliet’s balcony, which had him flying like a bird into a virile mid-air pull-up, made the women swoon. We watched Julia Motyka seem to grow up before our eyes, girlish antics turning into womanly determination and soulfulness. And Darren Bridgett as a drunken Mercutio almost falling off the garden wall as a love-besotted Romeo lurked below unseen was a brilliant blocking choice. 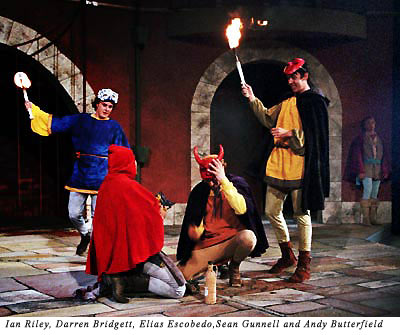 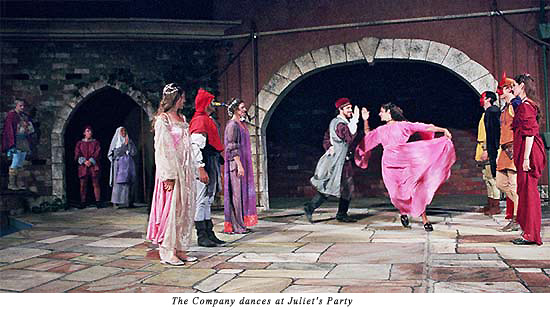 But theatre, like young love, is fleeting. Over 2,000 students saw this production of Romeo and Juliet; we hope it helped to instill a love of Shakespeare that will last a lifetime. 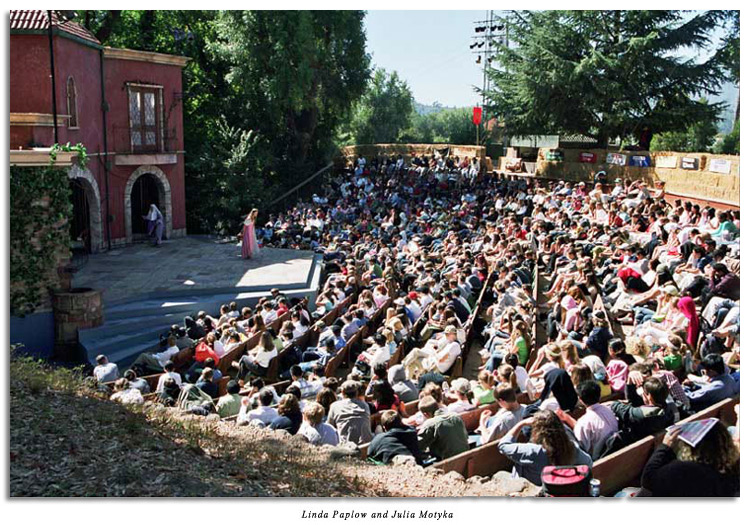 We think of Romeo and Juliet as the classic tragic love story, the most pursuasive celebration of romantic love in all Western literature. Yet, it starts as a comedy and a bawdy one at that, full of double entendre from wonderfully quirky characters like the ribald Mercutio and Juliet’s earthy Nurse. And what are we to make of Shakespeare’s protagonists: Romeo – the fickle, moody, impetuous crybaby – and Juliet – the headstrong, disobedient, impatiently sensual schemer? 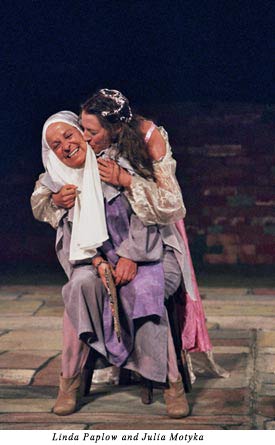 Shakespeare has invented a new genre – the romantic tragedy – which combines humor, haphazardness and human frailty, giving us not a serious, lofty play full of heightened language and epic, larger than life characters, but one that we recognize as universal not despite but because of its depiction of all too human, imperfect people who are “fortune’s fool(s.)” 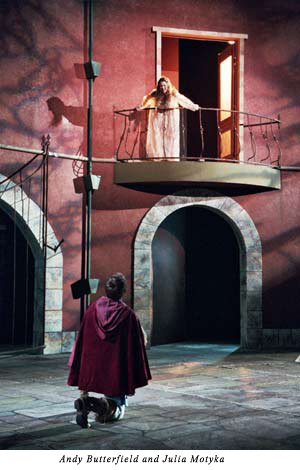 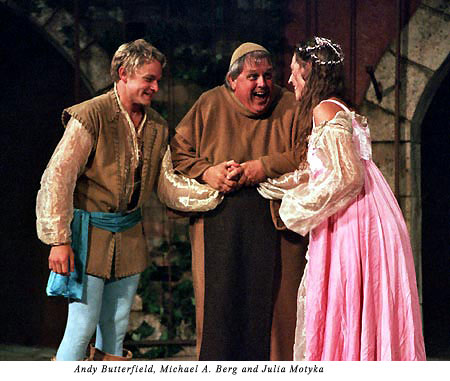 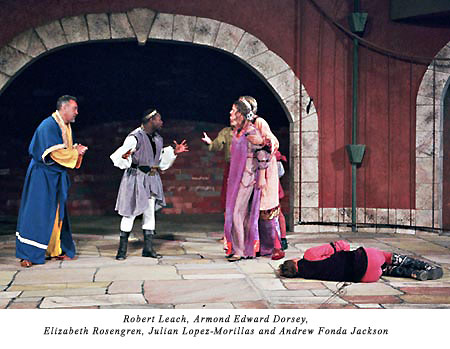 “Rejoice….If you have been yearning to experience the authentic flavor of this great romantic drama without any distracting hokum, here is your opportunity….the essential key to the success of this no-frills ‘R&J’ is the director’s casting of Andy Butterfield and Julia Motyka in the title roles. Both bring boundless energy that infuses every scene in which they appear, adding joy to their courtship, poignancy to their tragic fate. Currier has them running and skipping about the stage, words tumbling over each other as if there is never time to express all the emotion that is roiling within their youthful bodies. When they die, it is the extinguishing of two bright flames…”
Charles Brousse, Marin IJ 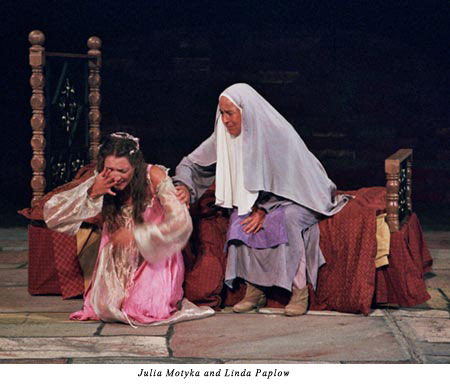 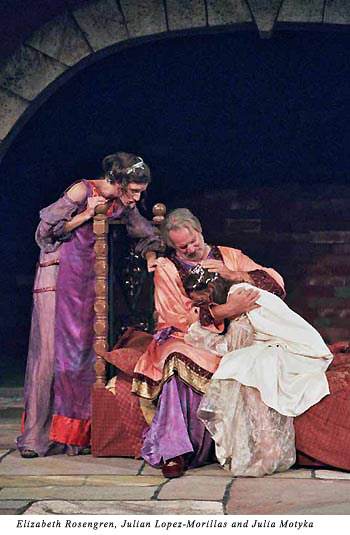 “sexy, athletic….the show is first-rate. In addition to its many little pleasures, Currier and company have pulled off one of the most exultantly physical R&J’s in recent memory….Also excellent is Darren Bridgett as the nimble-tongued Mercutio, played here as a streetwise tough whose anager is hidden behind jokes and fancy talk.” David Templeton, The Bohemian 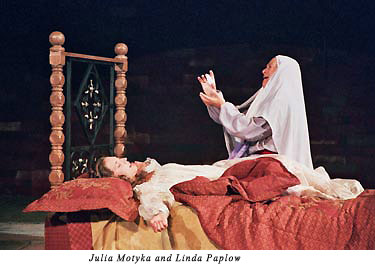 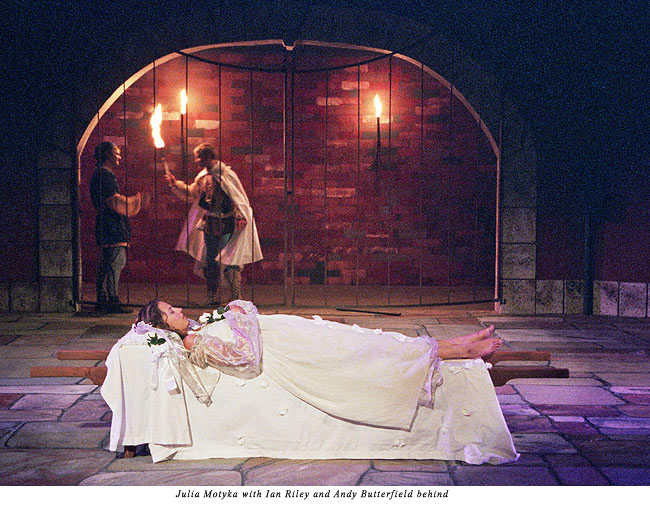 “…a revelation….it’s a testament to the power of this staging that, surprisingly, the audience hopes against hope for the play to end well….The costumes…are racy… Another terrific element is the original score… What Marin Shakespeare’s final production has achieved is a fresh look at Shakespeare’s most famous star-crossed lovers.” Olga Azar, Marin Scope 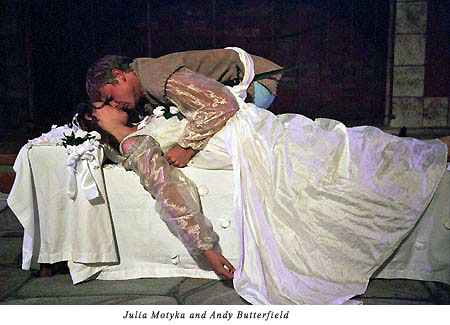 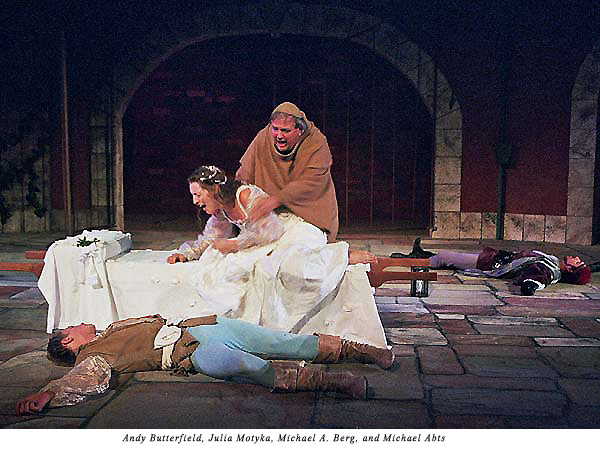 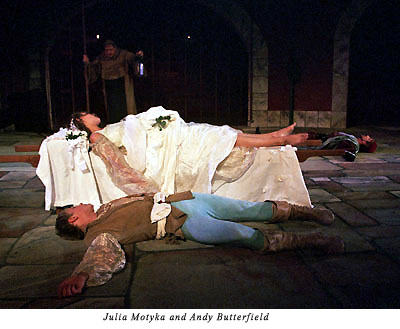 “if casting alchemy is everything in ROMEO AND JULIET, then director Robert Currier must be holding the Philosopher’s Stone. Were there any installed, Julia Motyka as Juliet and Andy Butterfield as Romeo, would set off every smoke alarm at the Forest Meadows Amphitheater….The clashing swords of Andrew Fonda Jackson (Tybalt) and Darren Bridgett (Mercutio) send showers of sparks into the night air….classical, perennial entertainment the whole family can immensely enjoy.”
Jeffrey R. Smith, Bay Area Critics Circle 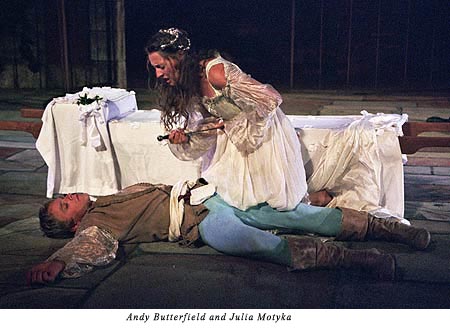 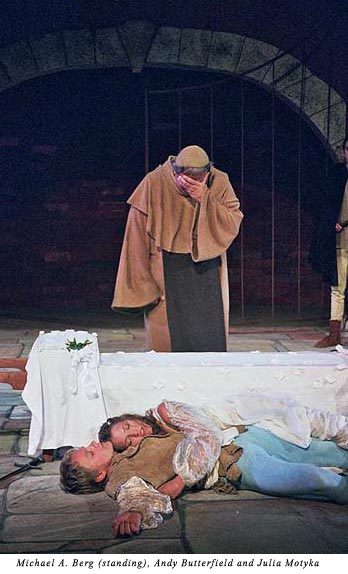 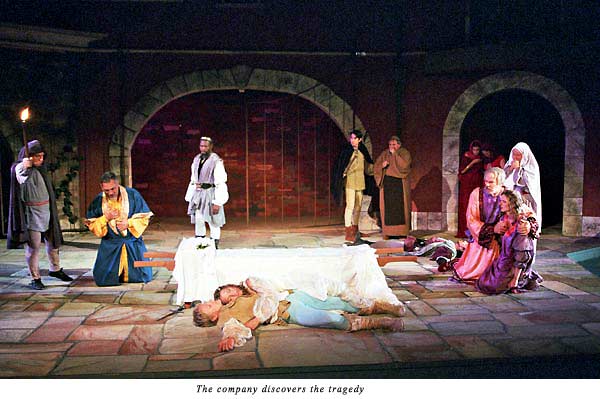 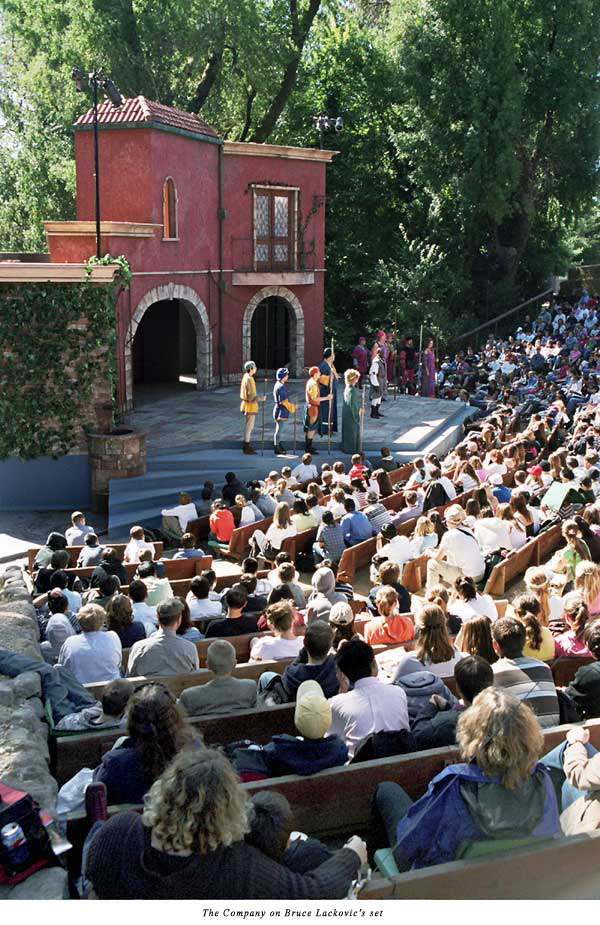