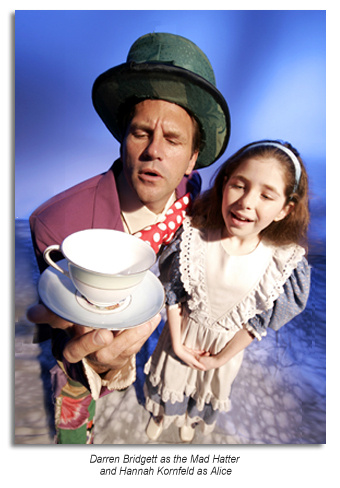 One of the fun things about Alice in Wonderland was watching the actors from King Lear switch back and forth in rehearsal between productions. Jack Powell would come from having his eyes poked out as Gloucester in the morning to an afternoon rehearsal where he practiced his Fred Astaire-like song-and-dance number as the White Rabbit. Mary Knoll would switch between Goneril’s deep pain and evil to the light-hearted silliness of the Queen of Hearts. For all of us – audiences included – this was a fantastic antidote to the darkness of King Lear. 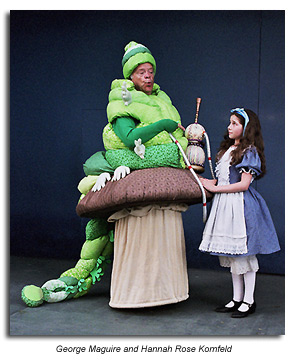 The script was very true to Lewis Carroll, with stunning music composed by Billie Cox, lots of eclectic choreography by Cynthia Pepper, wonderfully playful and colorful costumes by Michael Berg, and a chessboard playground-like set by Bruce Lackovic (which our Interns and crew valiantly set up and took down three times a week in what was undoubtedly our most difficult changeover ever between repertory shows.)

Yet for us, the production will always be tinged with the sadness of loss. Denise Kirchner, our dear friend, who created the outrageous props including the 52-foot long Alice arm and giant foot, passed away of heart failure just weeks after the production closed. Denise was a beloved fixture in North Bay theatre, having had a long association not only with Marin Shakespeare Company (starting as costume designer for our very first production in 1990) but also with College of Marin, the Mountain Play, Sonoma State University and many other theatres. She was full of life and light, intensely creative, generous to a fault, and always a joy to have around. We will miss her dearly. 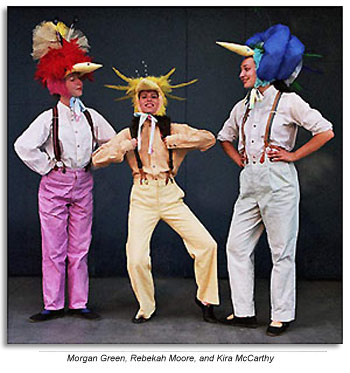 We have talked for many years about doing a production of Alice in Wonderland at Marin Shakespeare Company. Like the best of Shakespeare, it’s a classic story, with wonderfully poetic language, deep thoughts, and enduring characters. Like Shakespeare, it has been retold in many different ways — through film, TV, pop-up books, rock songs, and cartoons (to name a few.) Its eternal fascination is what makes it a classic. But why?

Alice is a coming of age story, but it is unlike the typical story. There is no quest, no dragons to slay, no impossible feats to accomplish, no prized princess’ hand to win. The journey Alice goes on is much more interior and subtle than Theseus’ vanquishing of the Minotaur or Dorothy’s search for the Wizard. This young woman’s quest is to answer the Caterpillar’s query: “Who are you?” and this is a question Alice has trouble with until the very end. Her tasks are to unravel words, to unpuzzle personalities, to navigate changing rules of society, and to find herself within herself. 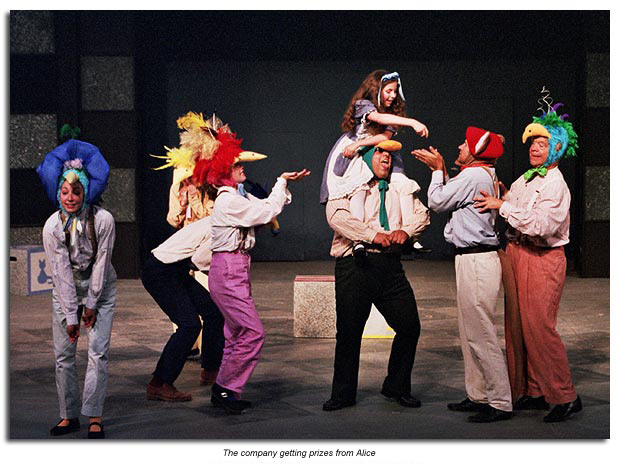 But the power of the story is Wonderland itself, the child’s world where fantastical things can and do happen — and are greeted with a child’s resilient logic and acceptance. And as we set out to tell this story here, outdoors, in a theatre with limited abilities for cinematic effects, blackouts, flyspace, and scenic changes, we found we had to rely on our imaginations and simple, childlike inventiveness to create the magic of Wonderland. And somehow that seems most satisfying. 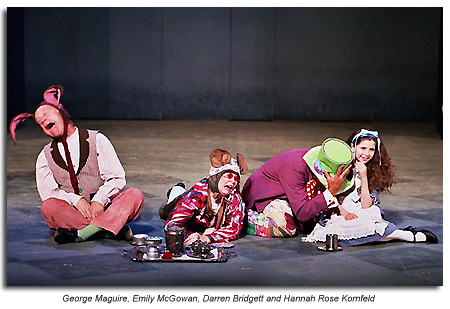 “…great family fun….The costumes are fantastic, the actors wear them with élan, and all appear to be having a lot of fun in ‘Alice in Wonderland’ – making Marin Shakespeare audiences laugh instead of cry as they do on alternate nights with ‘King Lear.’ Lesley Schisgall Currier adapts and directs Alice’s well-known journey, and she doesn’t settle for comedy; her aim is to capture the angst and confusion of a young girl who encounters strange creatures down the rabbit hole that is her preteen consciousness. Hannah Rose Kornfeld’s Alice brings this out….Nevermind the Freudian underplay, it’s the overplay that makes it all work….delighting parents as well as the young ones….And one can’t overlook the charming original score by Billlie Cox, choreography by Cynthia Pepper, lights by Ellen Brooks and those out-of-this world costumes by Michael Berg.”

“Lesley Schisgall Currier, Marin Shakes’ managing director, has reshaped the self-contained yet elusive Lewis Carroll classic of Nonesense to a stageworthy adaptation. She’s good at this: her version of ‘The Arabian Nights’ was a brave and memorable show the summer after 9/11….a midsummer’s entertainment promising there’ll be fun amid the conundrums….a host of brilliantly typecast characters….[Billie Cox’s] score’s fun, syncopating the already cockeyed rhythms of the action with a thinly-justified anachronism that somehow works…the real show-stopper is the polka-ish ‘Lobster Quadrille.’” 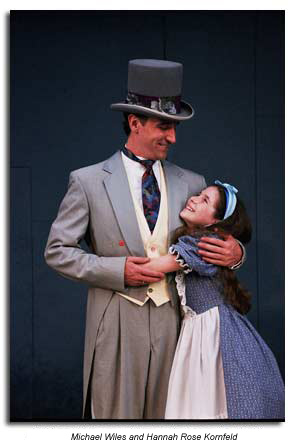 “…headed by wunderkind Hannah Rose Kornfeld in the title role….The older folk can savor the retention of Carroll’s pungent dialogue and witty situations, kids can laugh at all the unrelated shtick – the pratfalls, the phony accents, the funny dances, Michael A. Berg’s outrageous costumes, the actors’ frequent forays into (and interaction with) the audience….[Alice’s] transition into a giant is delightfully inventive….young Hannah Rose Kornfeld is superb in the title role.” 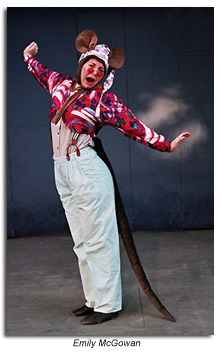 “This entertaining and charming adaptation of the Lewis Carroll story is ideal for families. But there’s enough humor and clever stage play in Marin Shakes’ ‘Alice in Wonderland’ to please even jaded adults.” 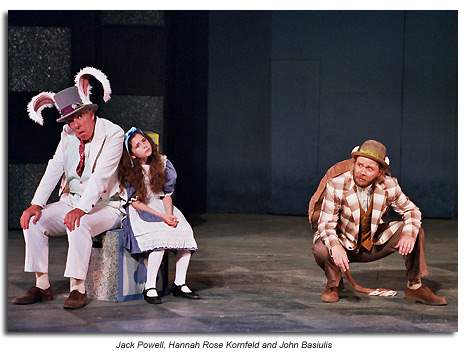 “Marin Shakespeare Company is presenting a hilarious and campy Alice in Wonderland….It is a challenge to find something brand new to add to the staging of this classic tale of the adventures of Alice, but Marin Shakespeare’s managing director Lesley Schisgall Currier has adapted a wild and wonderful version….Currier has assembled a superb cast of comic actors to make it one of the campiest versions you will ever see. It is presented in two 40-minute acts….Billie Cox of Ross composed all of the music specifically for this production. 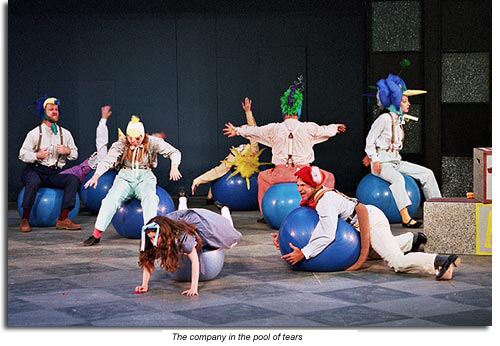 The score includes a polka for “The Lobster Song” and an old fashioned vaudeville number for the White Rabbit, played by Jack Powell. He is polished in his singing and dancing of this number. A song for Alice (played by Hannah Rose Kornfeld) is called “Father William” and it is sung beautifully. A jazzy rendition of “Jabberwocky” is sung by Cat Thompson with sass…. I give high marks to the cast, who are really enjoying themselves and turn in good performances. Hannah Rose Kornfeld is a perfect Alice. She has great clearness of diction and a wonderful range of expressions, from naivety to astuteness as the farce continues. She is pleasing in the singing and dancing scenes….Darren Bridgett is a laugh riot playing the Mouse, the Mad Hatter and The Cook….The actor gives a tour de force of comic acting….George Maquire gives Darren a run for his money when it comes to comic performances….John Basiulis is magnetizing as the Mock Turtle with his slow monotone voice…. 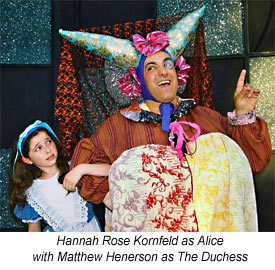 Matthew Henerson is a real hoot playing the Duchess in an outfit that looks something like a Mikado of Japan. His high falsetto is perfect in the role. Jack Powell shines as the nervous white rabbit. Emily McGowan as the door mouse at the tea party is entrancing as she attempts to tell a story for the guests.…Actor and pianist Michael Wiles, who portrays Lewis Carroll and performs much of the music, is excellent in both. Alice In Wonderland is brilliant with striking costumes by Michael A. Berg, a minimal set design by Bruce Lackovic and good lighting by Ellen Brooks. This is a production for the young children and for the child in every one of us.” 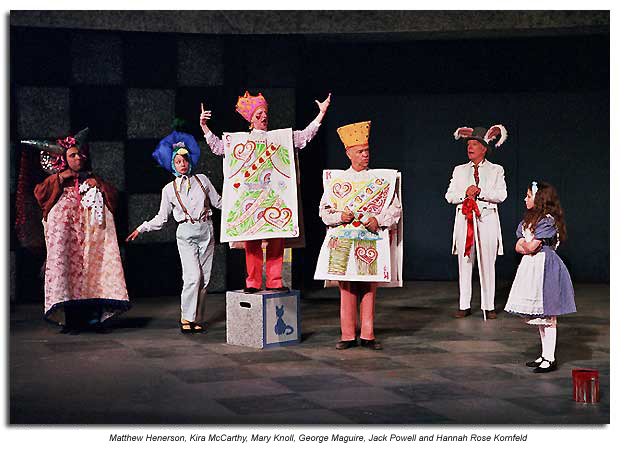 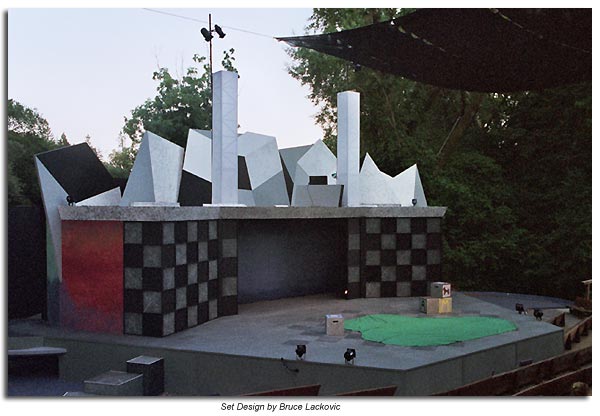