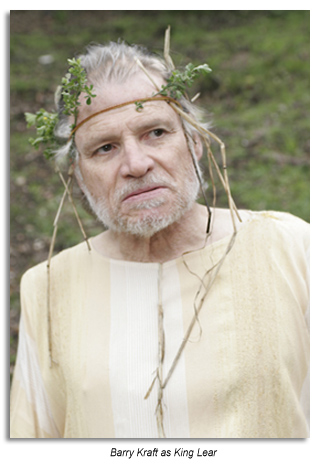 Anyone who is a true West Coast Shakespeare fanatic knows that Barry Kraft is one of the legendary luminaries in the world of Shakespeare production. Barry is a unique personality: he’s hard to reach because he has no phone. He can recite scads of poetry including his own from memory but he has no television set. His charmingly Socratic official title at the Oregon Shakespeare Festival for many years was “Festival Gadfly.” Barry is the king of the text. Nothing delights him more than trying to figure out if a mark on a photocopy of a First Folio is a comma or just a smudge, and how that decision can inform an actor’s choice about how to perform a particular passage. 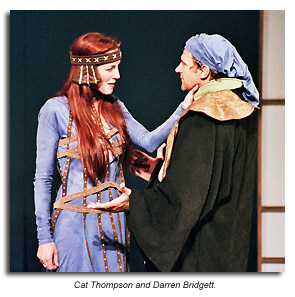 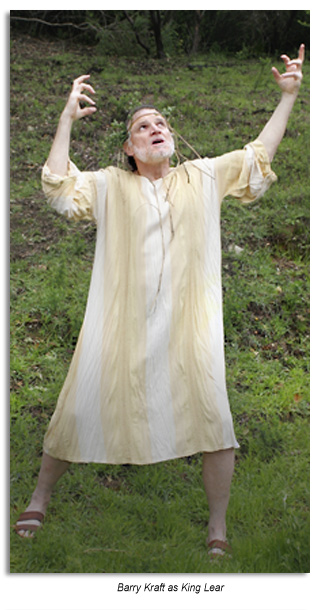 For several years, a highlight of our annual Ashland trip had been Barry’s talk to our group. When we saw “Romeo and Juliet” he shared his enormous working script, which had three different versions of the text (two folios and one quarto) laid out side by side. As dramaturge for the production, he had used this script to help the director make choices about the text before going into rehearsals. When we saw “Cyrano de Bergerac,” Barry delighted us by bringing in a globe of the moon, so he could show us the crater named for the French dreamer on its dark side.

Barry is a born teacher whose passions include chess, go, astronomy (in particular eclipses) and passing on his enthusiasms to students young and old. When we found out, over lunch following one of his talks to our Ashland group, that he was keen to take on the role of King Lear, we immediately starting planning how to make the production happen at Marin Shakespeare Company. 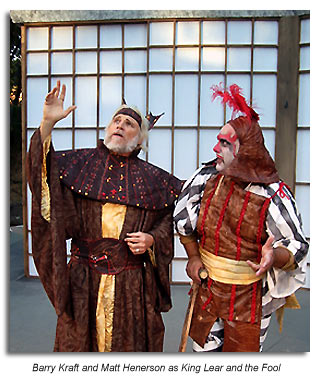 And we were sure glad we did! Barry’s performance was magnificent, detailed, vastly intelligent, passionate, and moving. He was ably supported by a wonderful cast; in particular, Matthew Henerson as the Fool was a stand out. The company braved record heat waves and Barry (who had trained for months for the final scene when Lear carries in Cordelia’s dead body) was the loudest voice saying “the show must go on” at what was a terribly hot matinee performance in what we called “Al Gore weather.”

Barry has since moved to San Rafael and so Marin is a far richer place for Shakespeare lovers now. We look forward to his continued participation as a teacher and actor with Marin Shakespeare Company. 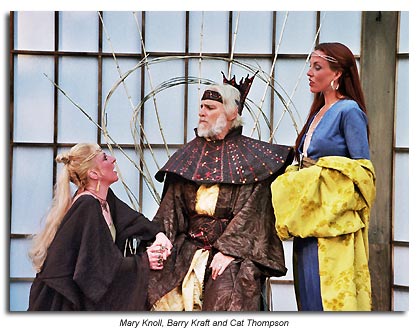 King Lear, one of the last of Shakespeare’s great tragedies (1605), is often referred to as the Everest of dramatic art. In some eras it has been the forbidding peak that few producers wished to climb. Being steeped in antithesis after 17 years of studying and staging Shakespeare’s plays, I propose a new metaphor…King Lear is the lowest achievement of great dramatic literature, the Death Valley, if you will, of literature. It is a work so bleak, so unrelenting in its cruelty and sorrow that for much of the past 400 years it has either been avoided or amended to a happier ending.

Children betray and plot against parents, siblings kill each other, subjects rebel against sovereigns, and the natural order is overturned, distorted, and tattered. We are witnesses to hubris, pandering, lying, betrayal, ingratititude, greed, lust, adultery, torture, stabbings (front, back and self), poisoning, attempted and realized suicide, eye-gouging and hangings…not exactly a laugh riot. 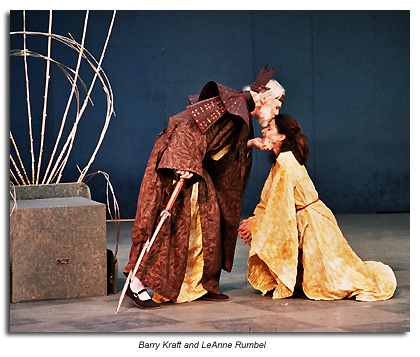 So why should we go so low? Well, remembering George Mallory’s comment on Everest: “Because it’s there.” Certainly if our Bard had not penned this disturbing, immense, and profound masterpiece we could all, perhaps, rest a little easier. But not only is the play “there,” but so too are the human impulses to baseness in us all. It is Lear’s redemption that gives us hope for ourselves – the lessons about his humanity he learns through the insanity of his inner and outer storms. 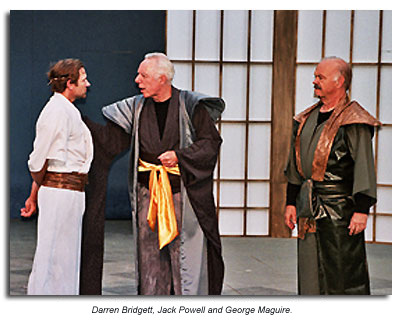 We cannot fail to recognize Lear’s greatheartedness, his huge generosity of spirit which both fires his love and his ridiculous demands for love in return. Every old man, observed Goethe, is King Lear, exorcised by nature itself. 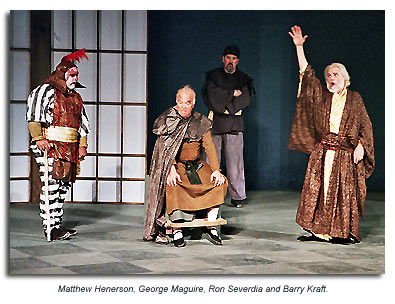 I am thrilled to take this journey with my old friend Barry Kraft, recently “semi-retiring” from his official capacity as “Shakespearean Gadfly” after one score and then some years in Ashland. When Barry first spoke to me about this role several years ago, it was one of the few things left on his actor’s “wish list.” The ripeness is all, and Barry is ripe for Lear. The only living Shakespearean I know who has “been shot from the canon 38 times,” he has performed in professional productions of each play attributed to Shakespeare in a career that started in John Carradine’s touring production of Hamlet in 1956, included a stint at Forest Meadows in the late 1960’s, and now returns him here to us once again. Every inch a king! We hope to do justice to this nadir of literature — King Lear.

“Kraft’s interpretation….cuts through the night like a knife. He plays the king’s decline into mental disarray with carefully crafted degrees of antic understatement, bewilderment and terror that grows increasingly affecting. Long before Lear recovers his wits to howl over Cordelia’s corpse, the intelligent arc of his portrayal exerts a magnetic pull….Abra Berman’s costumes are a visual feast of flowing, colorful robes with broad collars and shoulders, long sleeves, ornate waistbands and leather armor….Bruce Lackovic’s two-level set, with its Japanese paper-paneled walls, creates rich possibilities for stage pictures and varied entrances….Cat Thompson’s Regan almost embodies the drama of the daughters by herself….Mathew Henerson creates a striking, unconventionally angry-comic Fool….Jack Powell’s rich readings of Gloucester’s lines deliver much of the import of the tragedy that mirrors Lear’s….Michael Wiles is a strong, unaffectedly noble and affectingly mad Edgar….Kraft takes full advantage of their support to develop a Lear whose deeply personal dissolution is incisively etched, clearly thought through and inescapably human.” 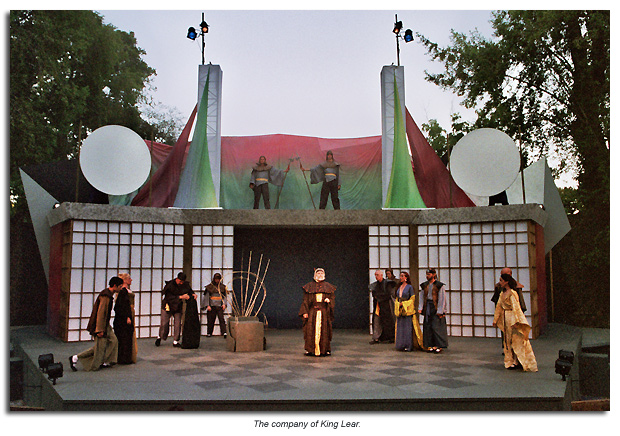 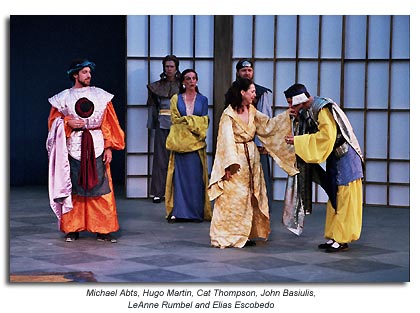 “With its solid core group of seasoned actors, crisp pacing by Currier and a text that has been pared down to well under the usual three-plus hours, MSC’s ‘King Lear’ offers a rewarding exposure to this complicated play.” 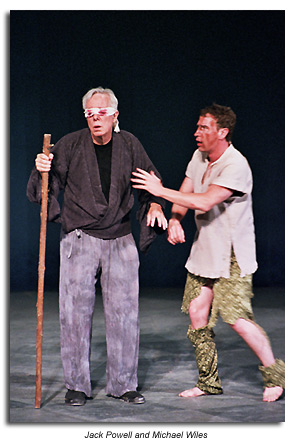 “…that rare thing, a satisfying live production of the play, is taking shape – appropriately outdoors – at the Forest Meadows amphitheatre, Dominican University, where Marin Shakespeare brings The Bard’s dark vision, shot through with beams of light, to life in a pleasing collaborative effort….Barry Kraft is ‘every inch’ a formidable Lear, who with the mad scenes begins to articulate his actions and the very focus of his attention differently, giving his performance a quality of strange intimacy, as if his kingdom has reshaped itself within his troubled mind, its ills as wide-ranging as the storm….As the mad king’s counterpart, Matthew Henerson is a dynamo, a loud vaudevillian Fool who – confronted with chaos and insanity – becomes the astonished voice of common sense….Two enormous drumheads stand above the stage, rolling with the thunder and sometimes displaying the shadow of the drummer when the lightening flashes.” 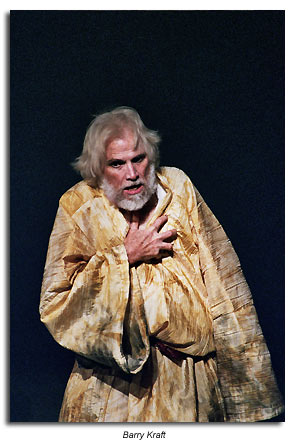 “’King Lear’ is rarely performed as it requires top flight Shakespearean actors, even in the small roles. I give kudos to the Marin Shakespeare Company for bravely choosing this production….The strength of the production lies in its cast, with some excellent performances….Barry Kraft gives a memorable performance….[his] portrayal of a man descending into madness is brilliant….LeAnne Rumbel gives a moving performance as Cordelia.” 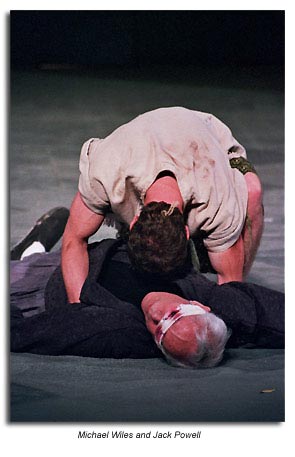 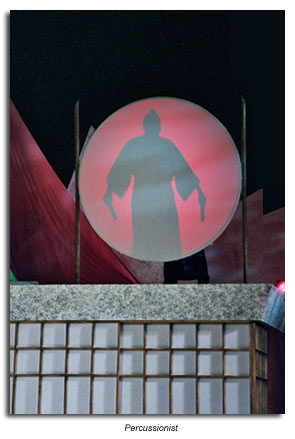 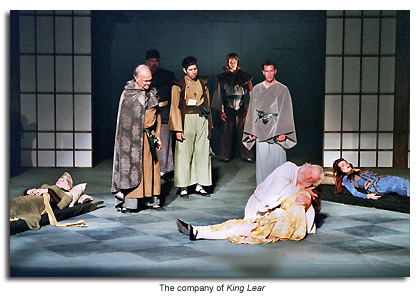 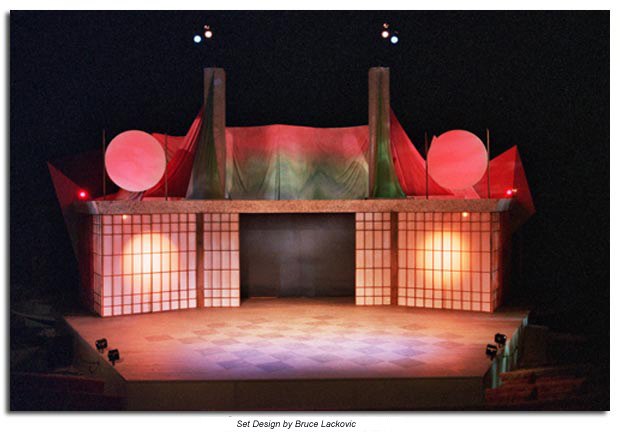