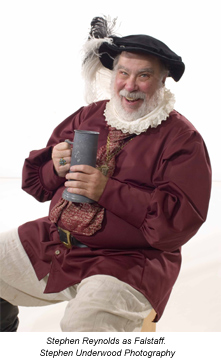 Henry IV, Part 1 is a great and popular Shakespeare play (well, as popular as a play can be with Roman numerals in the title.) It has the incomparable Falstaff in all his insatiable glory. It also has slews of other great characters – the young Prince Hal, the aging king himself, brash Hotspur, warlike Douglas, shamanic Glendower, clueless Mistress Quickly and many, many others. To do it justice requires careful casting, costuming and direction.

As it turns out, just prior to coming to Marin Shakespeare to work on these plays, Rob served as a text coach for the Royal Shakespeare Company on their productions of Henry IV, Parts 1 and 2. The trans-Atlantic collaboration had its challenges, but the pay off of having Rob’s keen insightfulness brought to bear on the productions was vast.

Casting the productions was extremely important. It would have been great to have chosen these plays with a Falstaff in mind. But we didn’t. Instead, we cast a wide net, calling many of the Bay Area’s leading Falstaffian actors (who were all booked or not interested in working at our payscale), conducting auditions in New York, and publicizing our search in Los Angeles.

Imagine our delight when – after months of Bay Area and New York searching – on the final day of our auditions, through the door walked Stephen Reynolds, who had driven up from L.A. to audition. 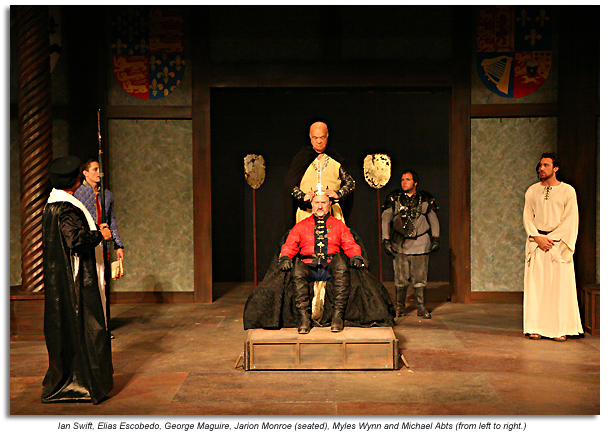 Stephen looked perfect for the role, but as we chatted we wondered if this gentle, soft-spoken musical theatre actor had the chops to create the boisterous, bigger-than-life Falstaff. Then, he read from the script. And we saw the actor transform into the role. There was Falstaff in all his witty, wondrous glory. We were sold. Stephen gave a superb performance, taught in our summer camps, charmed book clubs, and was the nicest, most generous company member imaginable.

Meanwhile, in New York, we had met a couple of young actors – Grant Goodman and William Elsman – who we loved for the roles of Prince Hal and Hotspur. Casting a wide net had all sorts of great dividends.

From the Playbill – Part One:

“Biting into the lesser known works always becomes for us a deliciously satisfying experience. The sagacious Samuel Johnson wrote of Henry IV, Part I and Henry IV, Part II ‘Perhaps no author has ever in two plays afforded so much delight’. However, tastes have altered since the 18th century and now we find that any title followed by a Roman numeral means potential box office disaster. So while we’ve set out to prove Samuel Johnson right – with an internationally known guest director and a fabulous cast drawn from near and far – we are hedging our bets by bringing back (after seven long years) The Complete Works of William Shakespeare (abridged.)“ 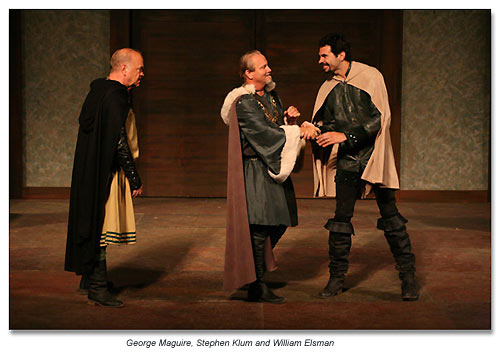 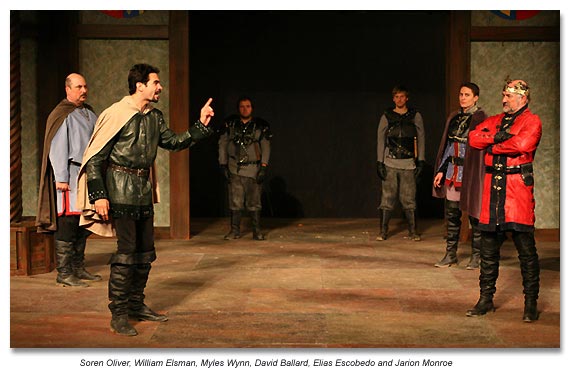 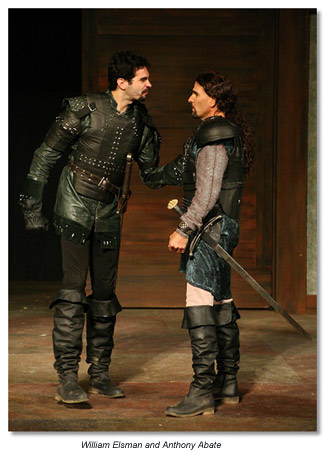 “Acclaimed composer Billie Cox has created some intriguing music for these productions in ‘Shakespeare style,’ showcasing the vocal talents of Stephen Reynolds (Falstaff) and the Welsh-singing Lady Mortimer (Michelle Pava-Mills) whose voices are of great pitch and moment….Stephen Reynolds is certainly the star of the stage, and his rendition of Falstaff is witty, gluttonous, cowardly and knifing, in all ways lovable, and in his own way true….Jarion Monroe plays the title character and commands the stage as a sometime stoic, other times emotional King who is haunted by guilt, conjuring more psychology than politic…. 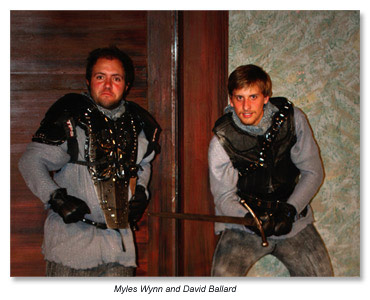 Of course, politic must play some part in these histories, mostly represented by Hotspur (William Elsman) and the rebels on one side, and Prince John of Lancaster (Elias Escobedo) on the other. Escobedo nails his role as the good son who follows in his father’s footsteps of desire and duty, and is both cold and calculating in Part 2 when he manipulates and then executes the rebels of Mobray, Hastings, and the Archbishop. Elsman’s Hotspur is perfectly unsettling, circling the stage like a rabid beast, fiery and volcanic, gnashing his teeth while spitting and growling his words.” 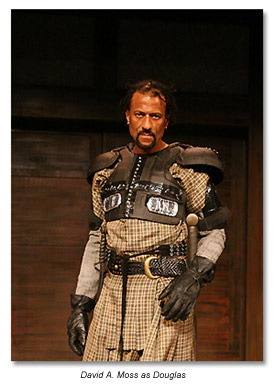 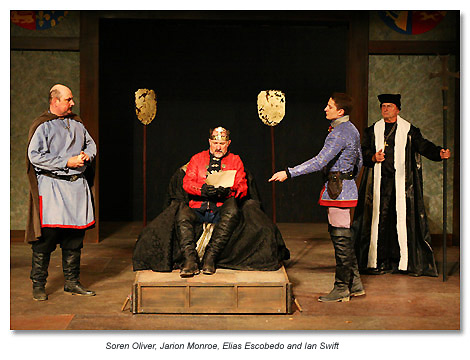 “William Elsman is perhaps the most remarkable actor in the Marin troupe: as the eponymous Hotspur. Elsman’s performance will absolutely rock you back in your seat….Grant Goodman as Prince Hal acts with nuance and transparency. Stephen Reynolds is superb as Falstaff….Lighting, which can be a real challenge in a theatre without a ceiling or walls was brilliantly achieved by Ellen Brooks….Convenient free parking, abundant clean picnic tables, orthopedic thermal seat cushions, and a pleasant volunteer staff that will make you feel like a V.I.P. are all awaiting you in a eucalyptus copse in San Rafael.” 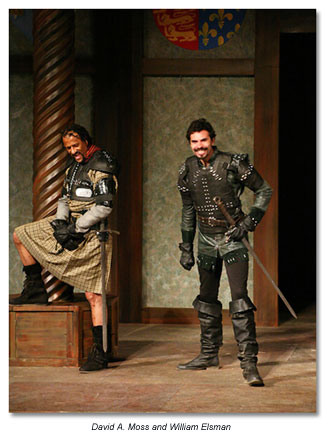 “And the man who embodies him here, veteran thespian Stephen Reynolds—making his Bay Area debut—takes the mug of sherry and runs with it. With his bushy, jutting eyebrows and round rosy face, Reynolds is the picture of jovial excess, lumbering around like a drunken bear one moment then prancing on tiptoes—often in pursuit of a fishnet-clad lady—the next. And his wheezing, breathless bellow belies a nimble tongue, off of which some of Shakespeare’s best and most engaging dialogue trips effortlessly…. 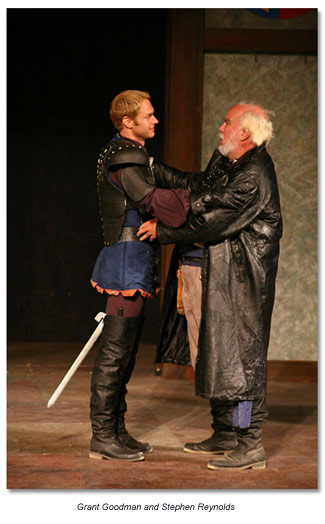 As Hal, Grant Goodman pulls off a credible arc, gaining maturity and gravity as he gradually accepts his fate. Jarion Monroe brings a reserved dignity to the title role, simultaneously endowing the king with weight and fragility….At the same time, Marin Shakes deserves credit for taking a chance and providing theatre-goers with the rare opportunity to see the ballad of Henry IV as it’s creator intended (a few cuts have been made to trim the run time, but this is about as complete as you’re going to get)… this production brings out nearly all of the two plays’ charms, which are manifold….Co-directors Robert Currier and Rob Clare use the space to full advantage; actors slip behind the audience and sprint down the aisles during one hilarious scene involving a botched robbery.” 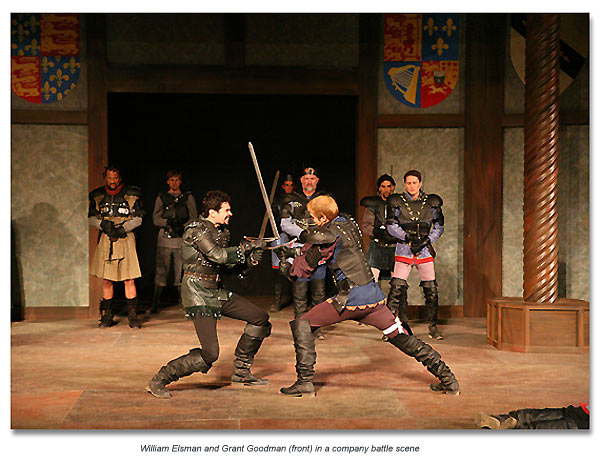 “Fight scenes by Anthony Shaw Abate are magnificently choreographed like a dance….Composer Billie Cox creates the sound and the music that blends will with the dramatic action.” 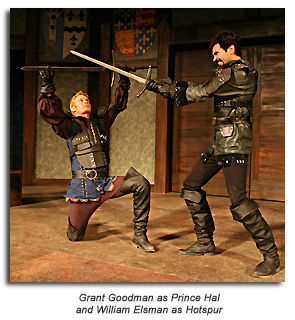 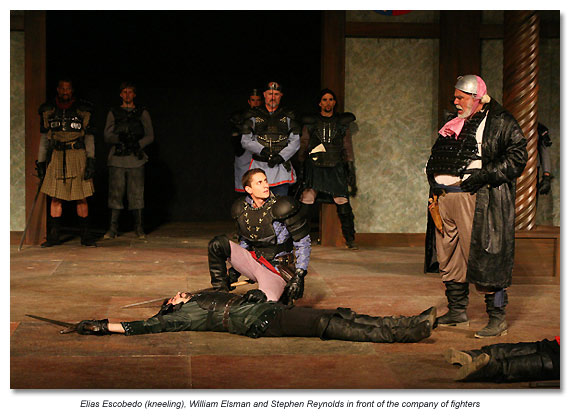