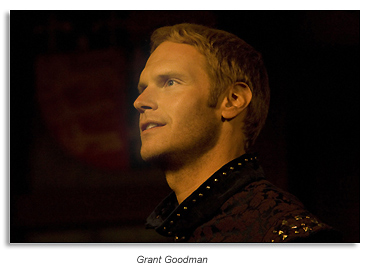 Producing Henry IV, Part 1 and Henry IV, Part 2 in repertory was ambitious for Marin Shakespeare to tackle. As it turned out, Part 2 was our lowest ticket seller in our 18 year history. But the artistic satisfaction of presenting these two plays, and presenting them so well to universal acclaim, more than made up for the small audiences. The plays allowed a company of 17 lead actors to play multiple roles or – in the case of King Henry and Prince Hal – to fully explore the arc of a character over the course of the two plays. For our actors, it was a wonderful creative challenge. For audience members who attended both parts, it was a rich and rewarding theatrical experience.

From the Playbill – Part Two:

“More than any other of Shakespeare’s works, the Henry IVplays give us a huge spectrum of society. Kings, princes, noblemen, country justices, urban thugs, destitute bumpkins, pox-wracked prostitutes and even the fleas that live in the beds at the Boar’s Head Tavern all make an appearance. Scenes of great pitch and moment alternate with the commonest of activities. Shakespeare’s insatiable appetite for everything, for comedy and drama, for all strata of humanity, for the richness of language, mirrors Falstaff’s great appetite for life. 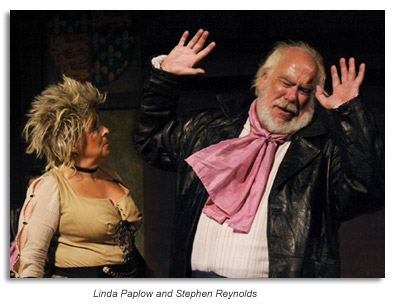 As one of the few Bay Area theatres that presents plays in repertory, we are able to give you both parts of Henry IV, two plays that have often been melded into one evening of theatre. But in the spirit of dutiful moderation, we have trimmed each play to a manageable two and a half hours. You could say we have a vast appetite for Henry IV. We hope you will share the delight of this feast of words, this cornucopia of character, this grand, sweeping, glorious world.” 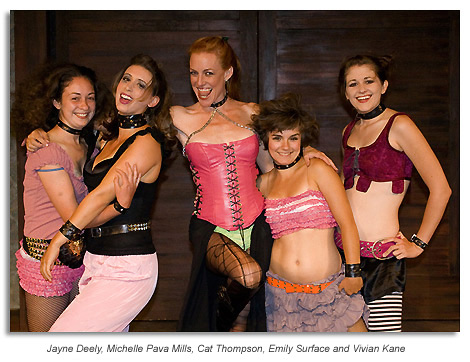 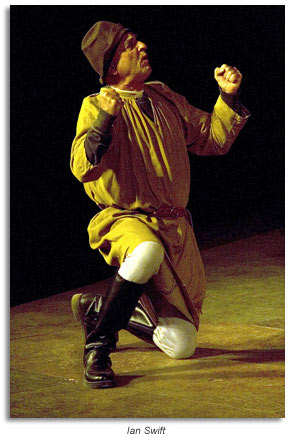 “Besides those who return from Part 1, standout performances in this segment include George MaGuire (Shallow) and Ian Swift (Silence) as a pair of country court officials, Jack Halton (Bardolph, Falstaff’s loyal acolyte), and David A. Moss (Pistol and Bullcalf)….MSC’s production is noteworthy for the actor’s unusually clear vocal projection, which undoubtedly reflects Clare’s British background, as well as the acoustic enhancement afforded by Bruce Lackovic’s excellent set. 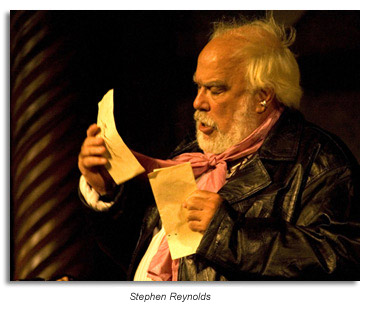 “One of the many pleasures of watching both these plays is to see how ably actors change in very different roles. In Part I,David A. Moss plays Douglas, a Scottish lord with a fierce gleam. In Part II, he plays Pistol, an out-of-control ensign to Falstaff who benignly threatens other Eastcheap denizens. Moss’ range is proven between the roles, one serious, the other comic….The actors with the same roles in both plays are equally talented, Goodman adept at showing his character’s journey from partying prince to mature and just king. Monroe, as King Henry, has gravitas and can perform difficult scenes with grace. 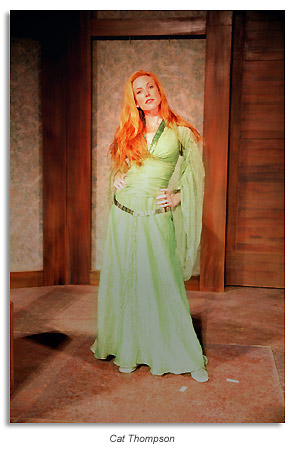 Paplow has a lot of fun with her Mistress Quickly, as does Thompson as a nearly perpetually intoxicated Doll Tearsheet….It’s not often that Shakespeare’s History plays are staged in Marin, and while it might be true to some that a day of ‘Henry’ sounds intimidating, in fact it’s largely entertaining and a genuine accomplishment for Marin Shakespeare Company. If MSC can assemble as talented a crew and cast as this year, perhaps next season it can treat audiences to the bookend plays, because current audiences will learn that Roman numerals do not always add up to dull theatre.” 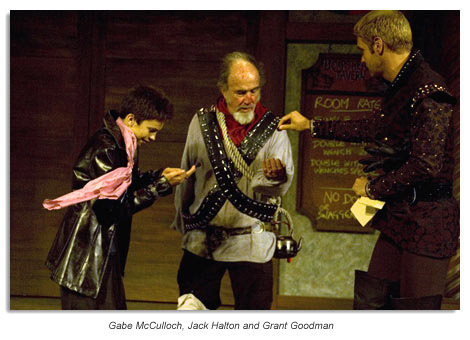 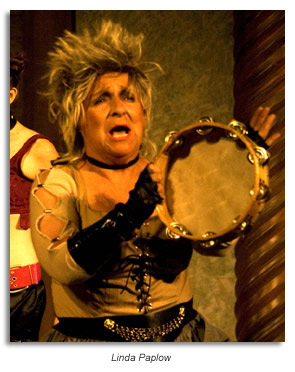 “The Marin Shakespeare Company is closing its 07 season with a rare production of both Parts 1 & 2 in repertory. It’s an ambitious project and a demanding one…in short, these Henrys have every opportunity to fall flat, and they don’t. Instead Henry IV, Part I and Henry IV, Part II are fully satisfying, bring-your-friends-along good theatre.”

“With Marin Shakespeare Company’s ambitious double bill of Henry IV, Part I and Part II, we are privy to the internal struggle of Prince Hal, who is confronted with the very real possibility that he may soon give up his comfortable life to take on his preordained, and seemingly unwanted role as England’s King…. 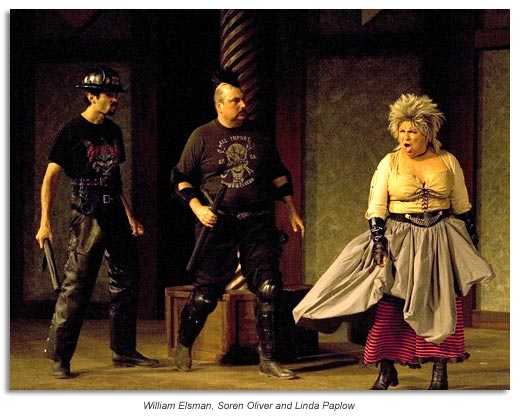 As is usually the case with theatre, most of the accolades should go to the accomplishments of talented actors. Actor Grant Goodman proves this point. Playing Prince Hal, Goodman brings Shakespeare to a contemporary level for the audience….Jarion Monroe, as Henry IV, offers more of an ethereal, subtle performance. Watch for the scene between the royal father and son inPart II, shortly before Hal becomes king. It’s heartbreakingly well-crafted…. 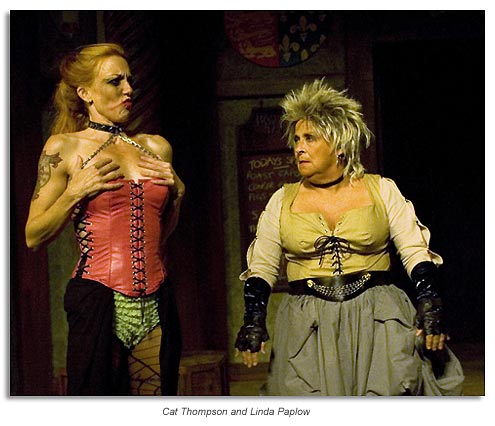 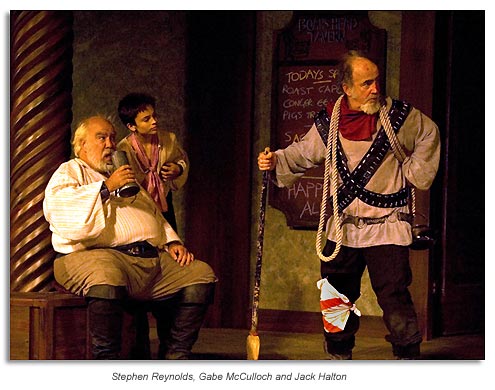 Then there’s Stephen Reynolds as Falstaff—jolly, melancholy, wise, foolish and rotund metaphorically and physically. Reynolds gives an amazing performance that showcases why these two plays are known as ‘the Falstaff plays.’”
Clayton Schuster, The Habit 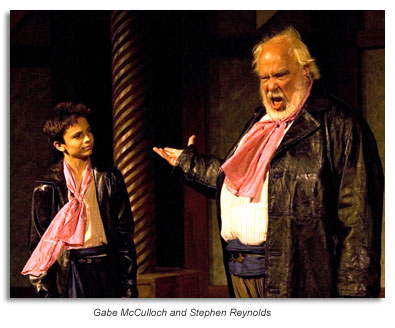 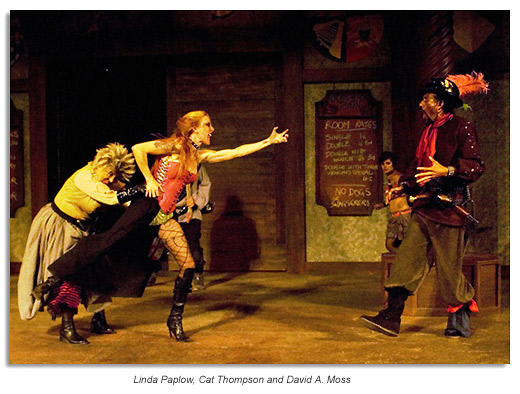