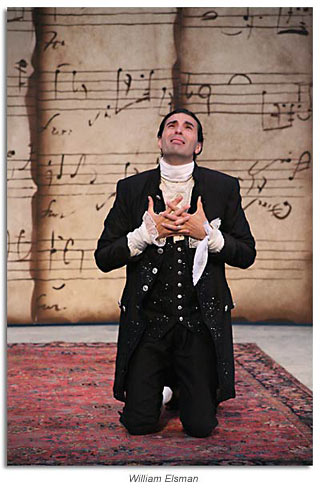 Robert Currier had been thinking about producing Amadeus for years. We’d considered various actors to play the lead roles. We’d thought about doing the play outdoors without elaborate sets (but with elaborate costumes.) The big motivation to choose the play for the 2008 season was the 2007 cast parties, where a lanky Bill Elsman was wont to amuse the rest of us with his impersonation of a clueless young actress named Wendy alternating with chunks of Salieri. Bill had played the envious composer at the Pennsylvania Shakespeare Festival. When we considered that another of “our” actors, Drew Hirshfield, had played Mozart recently – our then Administrative Assistant Elias Escobedo had been to see the production – at the Wilma in Philadelphia, we realized we might be able to put together an incredibly talented and experienced duo to helm this fabulous play about these two amazing men and their music. 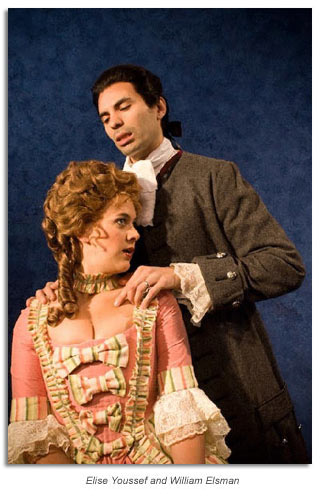 As is not always the case, the pieces of the puzzle fell beautifully into place. Drew was happy to come back from the East Coast for the production, given that it closed just a week prior to his planned Northern California wedding. A gutsy Elise Youssef won the role of Constanze, appearing at our general auditions, and winning us over with her talent and personality. The ever reliable Jim Dunn was thrilled to direct, and the supporting roles were easily filled by actors mainly from The Winter’s Tale company. 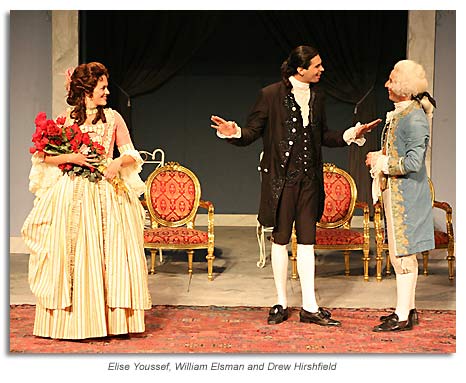 One of our favorite scenes – among many – was the flirtatious coupling of Salieri with his student, Katherina Cavalieri, a line-less role played by Alexandra Matthew, who was also our Hermione. We enjoyed knowing that the two actors were indeed an offstage couple as well as an onstage pair, having met at one of those aforementioned cast parties the year before. A month after the 2008 season ended, Bill proposed to Alexandra – life imitating art again! 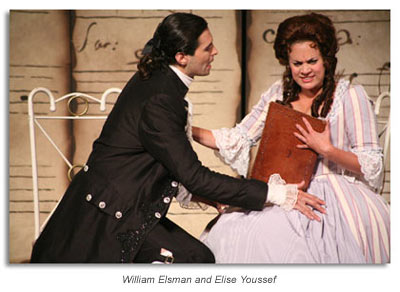 “The three plays this summer all revolve around the theme of jealousy, yet each explores different aspects of this most human emotion. The Winter’s Tale is a strangely moving and beautiful story of a man who makes terrible mistakes while incorrectly accusing his wife of adultery, yet eventually achieves a sort of grace and forgiveness through the passage of time. Amadeus is Peter Shaffer’s exploration of professional envy, suffused with the godlike genius of Mozart’s music, a genius his nemesis Salieri cannot stand to lack. Much Ado About Nothing revolves around rumors of people both loving and not loving each other; Claudio’s quickness to believe in Hero’s infidelity drives the plot while Beatrice and Benedick’s slowness to admit their attraction to each other provides much of the comic juice. In all, these are three brilliant and beautiful stories we know you will enjoy.” 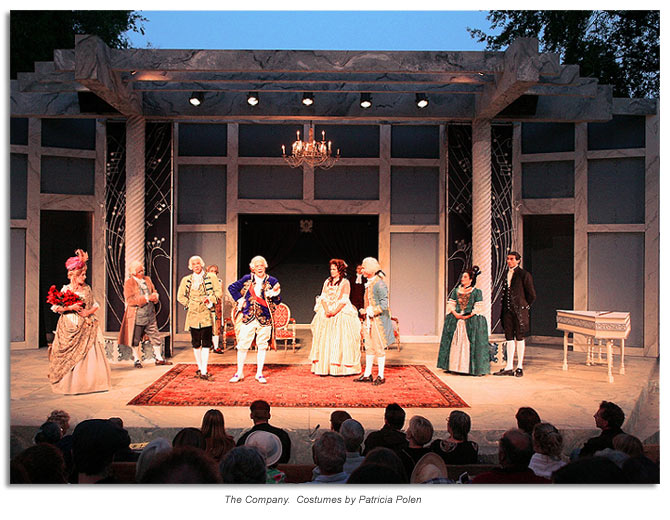 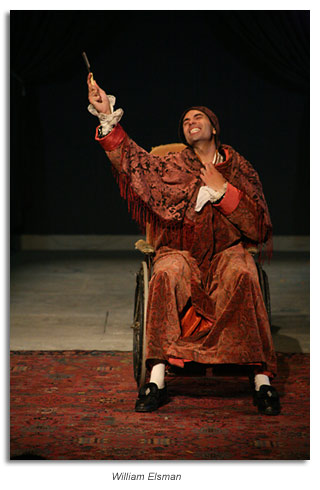 “As played by William Elsman, in deft changes from the elderly Salieri to the scheming Viennese court composer, the suspense holds up, the jealousy is gnawingly real and his intense listening makes Mozart’s melodies sound new and revolutionary…. he derives riveting drama from the murderous envy and awe at Mozart’s genius.” 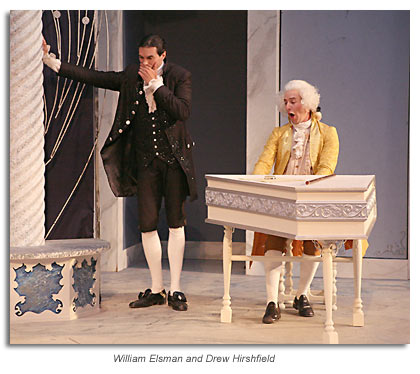 “Those who know Amadeus the play only through the movie it inspired should consider snapping up a ticket; not only is the play’s script superior to the movie’s, the performances in this production are well worth catching….As the rival composer, Elsman and Hirshfield make an electrifying duet.” 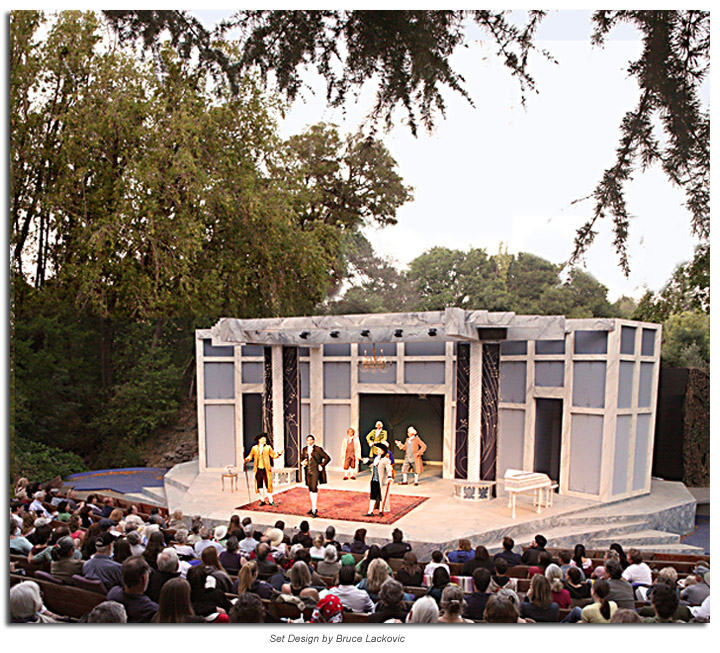 Everything about Marin Shakespeare’s Amadeus is on a grand scale… William Elsman is a superb Salieri…. The drama is all there, and director James Dunn keeps the conflict at a boil….Most of the company will morph smoothly into different roles over the summer, part of the pleasure of seeing all three offerings. Celia Madeoy, vocal and fiery as Paulina in Tale, has nothing to say as Salieri’s good wife, but her resentment is clear to the back row. Alexandra Matthew, whose Hermione in Winter’s Tale was pure and white as marble, is sexy and glowing as Salieri’s young and ambitious pupil….Elsman is charismatic….he is always vividly human….Hirshfield captures both the charm of the child and the pathos of the starving artist who looks for rescue from a man who wishes him dead. 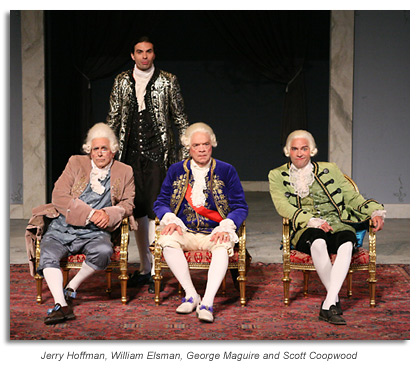 Marin Shakespeare Company has outdone itself with ‘Amadeus,’ the witty, captivating play by Peter Shaffer….the production is sumptuous and engaging from start to finish….Elsman…portrays Salieri with tremendous range, from pious composer of middling talent to conniving, reptilian codger desperate to have his name resound through the ages….Although entertaining and often funny, ‘Amadeus’ raises profound questions beneath the shine of gossip and scandal….Sound design by Billie Cox is both whimsical and powerful. Patricia Polen’s costume design is masterly, with lovely, intricate clothes that add their own drama to the show….Elsman’s performance is spellbinding….always in the right key, spanning the various stages of life with delightful, malicious glee. 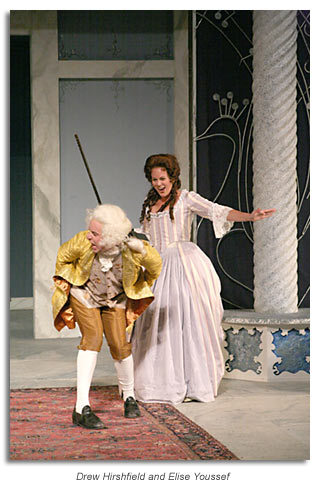 Drew Hirshfield as his nemesis is just as good….Hirshfield gives his character a forceful blend of impishness and vulnerability, a profane Peter Pan with a talent he scarcely seems to understand. Actors playing smaller roles are equally compelling. With crisp comedic flair, Mark Robinson and Rafael Untalan play the Venticellos….This memorable show, among MSC’s best in recent years, accomplishes the tricky task of amusing, bemusing and provoking.” 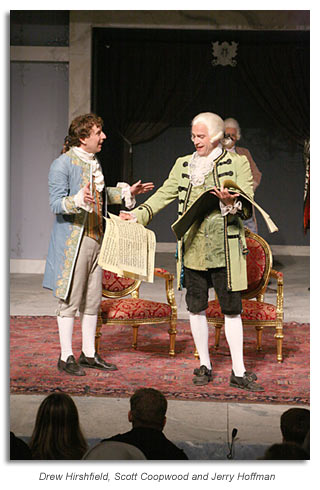 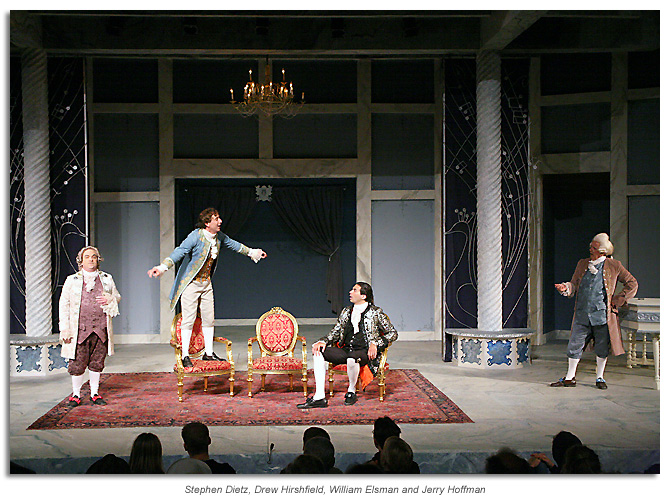 William Elsman excels as Salieri….Tall and sinewy, he is a charismatic figure on stage, totally at ease with the excesses of arrogance and self-flagellation that Shaffer’s melodrama demands.…Drew Hirshfield is a hyper-kinetic Mozart, leaping about, giggling incessantly, tossing off references to private body parts and generally behaving so outrageously that it raises doubts about whether he’s in command of his sanity.” 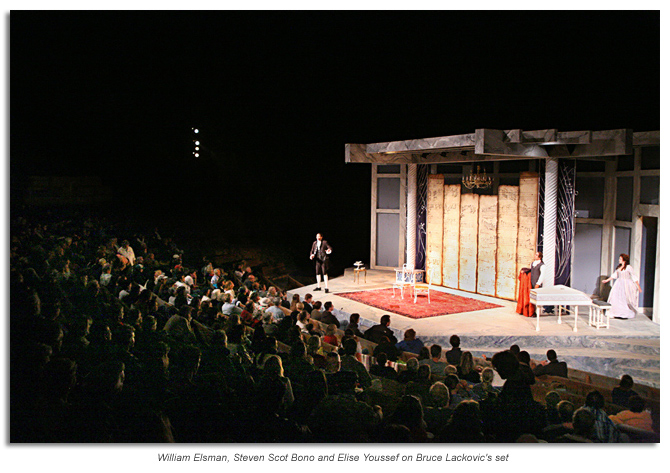 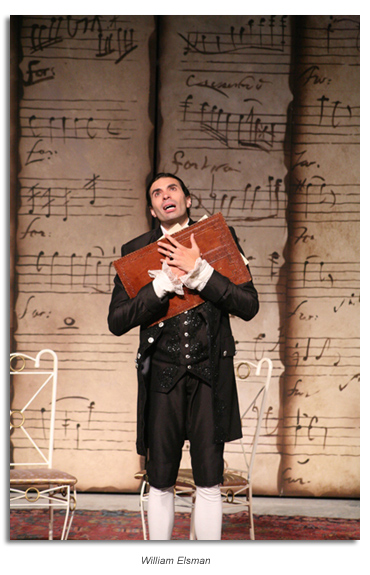 “The set design of Bruce Lackovic introduces the performance. The stage doors appear as aged sheet music, brown and torn at the edges. A grayish-white replica of an 18th century piano stands at the right of the stage, completed by props designer Joel Els. The large sheet music vibrates to the introductory music…. If you attend MSC’s “The Winter’s Tale,” you can witness the chameleon-like adaptability of actors that are in both productions. George Maguire, who plays a redneck type of Shepard in TWT, plays a regal and upright Emperor Joseph II. Jerry Hoffman also plays a more serious role, Johann Kilian von Strack. Scott Coopwood, who played the confident Polixenes in TWT, plays a lighter role, Count Orsini-Rosenberg, in Amadeus. The three actors give each role a distinct personality….Hirshfield gives his role the hysterical laugh as actor Tom Hulce did in the film adaptation in 1984. He carries the childlike wonder of the musician legend. Underneath Mozart’s mocking humor, Hirshfield carries his serious undertones….I admired the detailed costume design of Patricia Polen….Polen’s craft deserves a nomination for best costume design in local awards.”

Maria Vrobel – Listen and Be Heard 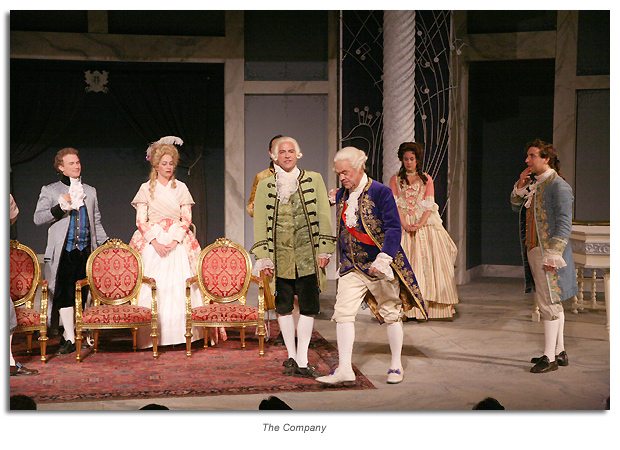 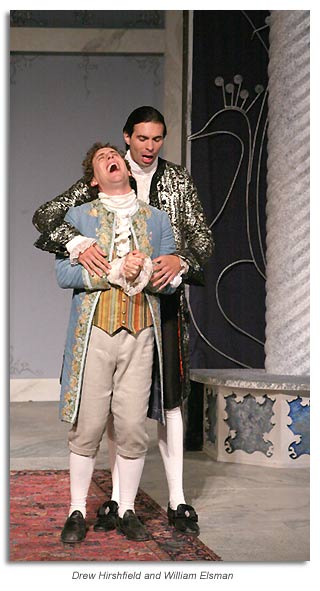 “A Brilliant Production of Amadeus

Marin Shakespeare Company is presenting its Shakespeare Under the Stars with a staggering production of Peter Shaffer’s Amadeus….Marin Shakespeare Company has a cast of fine actors, beautiful costumes and a convincing story to tell. Peter Shaffer’s words are beautiful and clever with a lot of in-jokes that persons who love Mozart’s music will enjoy.…Director James Dunn has made this exquisite production less melodramatic by making Salieri, who is outraged at the unfairness of God for making Mozart more gifted than himself, a more human and heartbreaking character….William Elsman…plays the jealous court composer Salieri. He offers a polished, droll Salieri eager for our sympathy. The actor holds the attention of the audience, especially in the touching finale to the soliloquy of Mozart’s “The Marriage of Figaro.” He also handles well the alternating between the old and middle-aged Salieri. David [sic] Hirshfield…is dazzling as Mozart. He portrays the character as a child prodigy who never grew up. He is astonishing with his puerile behavior and rash tongue that wreaks mayhem with his career and marriage. It is one of the most riveting performances I have seen this year.

Elise Youssef…handles the many emotional changes of Mozart’s wife Constanze marvelously. Alexandra Matthew…gives a captivating performance as Salieri’s pupil, Katherina Cavalieri. George Maguire…is perfect as the imperturbable Joseph II. He makes the emperor tremendously elegant and entirely human. Mark Robinson…and Rafael Untalan…as the delectably gossipy “Venticelli” (the “little winds” who spy for Salieri) act with much savor and are very loving in their speech and movements….James Dunn’s direction is a masterpiece of stagecraft. Costumes by Patricia Polen are elegant and eye catching. Billie Cox’s sound design is excellent, with snippets of scores by the great Mozart. Bruce Lackovic’s set background is a Mozart score that opens up onto the court of Emperor Joseph.”

” Most people have seen the Oscar winning movie based on this play written by Peter Shaffer. But as great as the film version is, “the play’s the thing,” providing an immediacy to audiences that a movie never can. Live performers on a stage really draw us in and when the star is as good as Elsman, the audience is totally intrigued by Salieri’s struggles with mediocrity verses genius.” 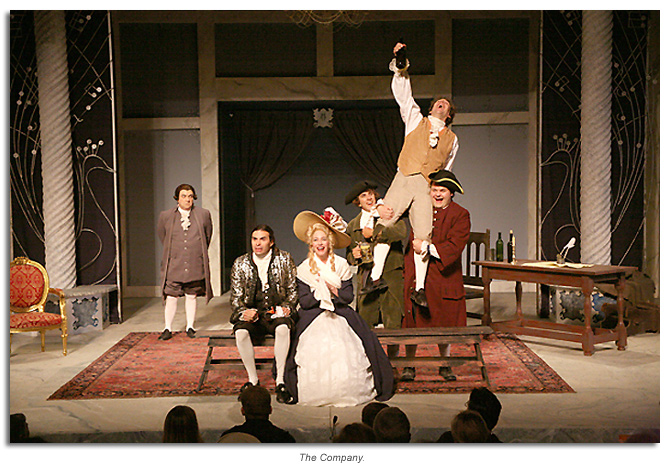 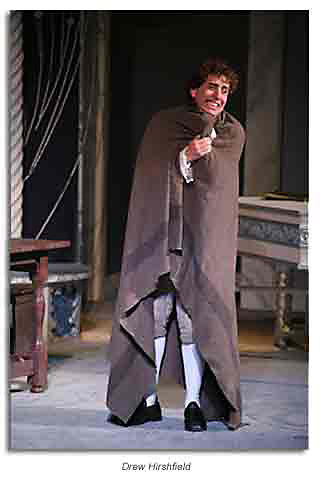 “Superb….Marin Shakespeare Company performs every summer in the very beautiful Dominican University of California outdoor Amphitheatre, set in a quasi forest setting in San Rafael. It seems as though it is a long way away from Walnut Creek, but in reality, it is only about a 45- minute to one-hour drive, depending on the route you take. I have not gone there for some time because we can see such excellent Shakespeare theater right in our own backyard, with the California Shakespeare Theatre located in the Orinda foothills.

But when I received notice that it was producing “Amadeus” in repertory with “The Winters Tale” at this time, I decided it was time to revisit this superb theatrical company again….Peter Shaffer’s “Amadeus” is directed by James Dunn, who delivers a superb professional level cast and production in this current offering….The play is an exciting dramatization of what appears to be a largely fictitious re-writing of history, however, perfectly executed by a stellar cast….this is a terrific production and I strongly recommend that this is a dramatization that you should enjoy….Elsman…is phenomenal as the young Salieri….Drew Hirshfield, who plays Mozart, and Elise Youssef, who plays Mozart’s wife, are truly outstanding. The entire cast does a highly commendable job, delivering an enjoyable evening of entertainment. The sets (by Bruce Lackovic) and costumes (by Patricia Polen) contributed immensely to the entire experience.” 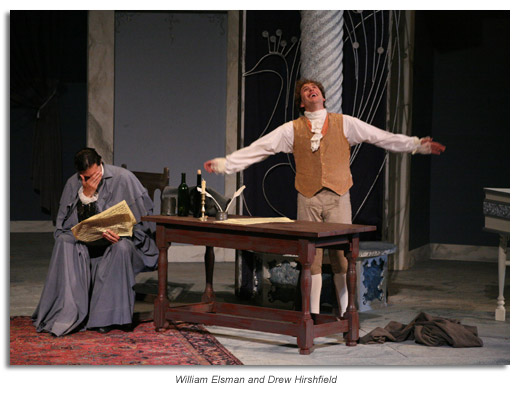 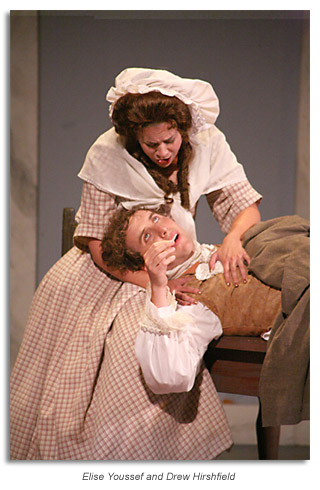 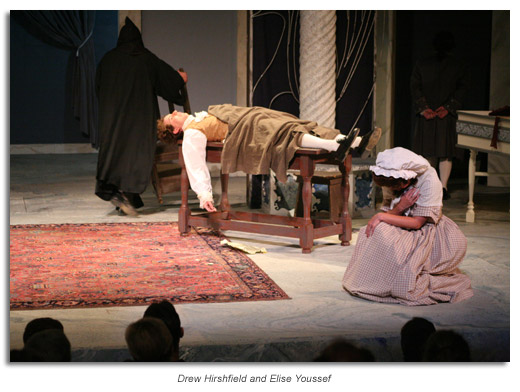 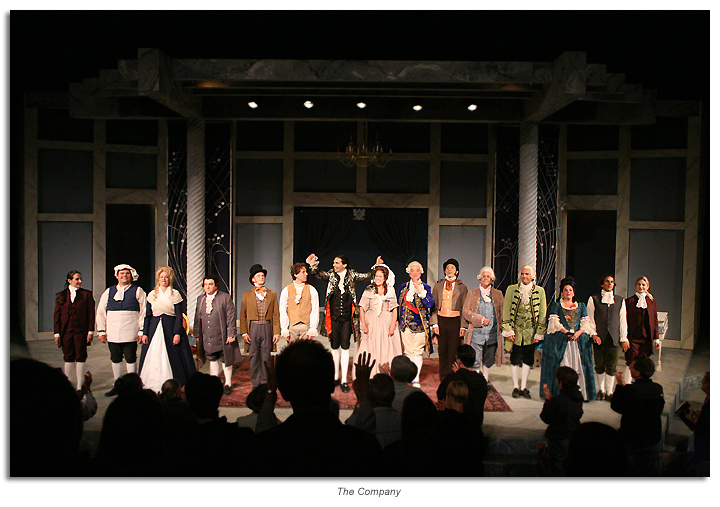