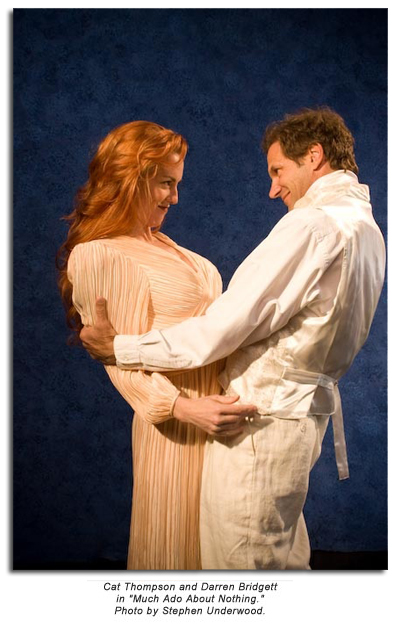 Some productions feel easy. With Cat and Darren eager to take on Beatrice and Benedick, we knew we had the beginning of a great production. When we saw Michael Ray Wisely audition for Dogberry, we were really feeling good. But then, we happened to find a peppy violin-playing actress, a skillful guitar-playing old friend, and an enthusiastic hammered dulcimer virtuoso drum instructor – all also Shakespearean actors. We cast these musical talents and several months later introduced them to our composer, Billie Cox, having chosen the 1930’s for the production’s setting. “Awesome!” said Billie, “our musicians play just the same instruments as classic 1930’s trios like the Mambo Kings.” We love synchronicity. 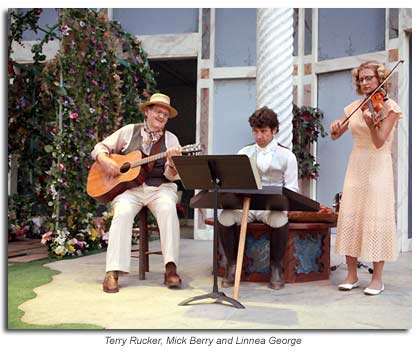 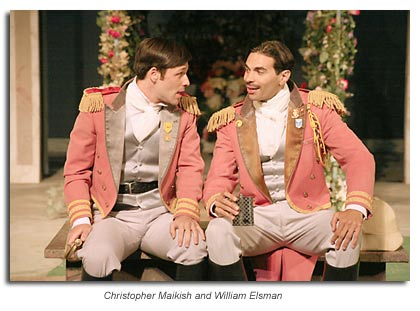 Our fabulous costume designer Michael Berg (who doubled as a hysterically dementia-riddled Verges) adored the period and sold us on wine pink army uniforms that turned out to be perfectly romantic and the start of a gorgeous pastel color palate for the show. 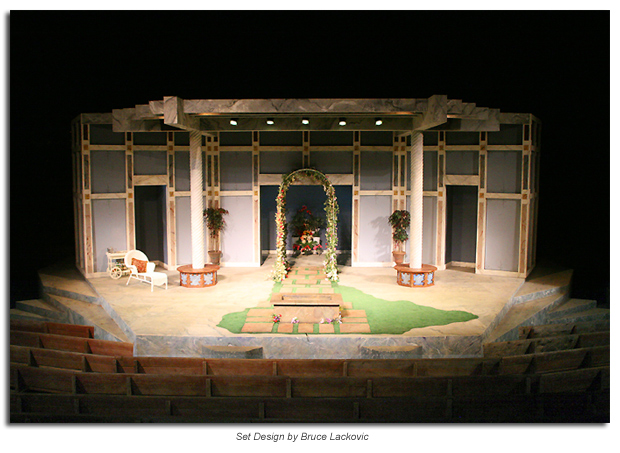 Props designer Joel Eis suggested a climbable arbor and set designer Bruce Lackovic helped figure out how to rig it so Darren could swing by his ankle during the gulling scene. Things just fell into place.

With all live music, including a show-stopping jazz solo by Christopher Maikish as a distraught Claudio, you couldn’t find a more romantic, witty and charming way to while away a few hours under the stars on a warm September night in San Rafael. 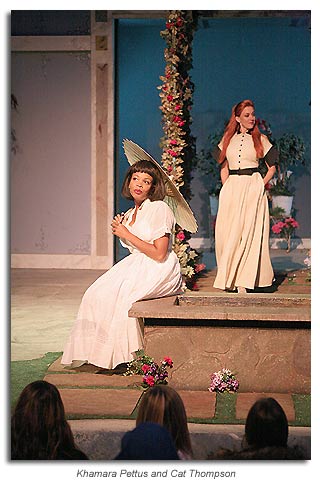 “How wonderful it is to direct a ‘new’ Shakespearean play, one I might have read or seen but never had the pleasure of studying, casting, rehearsing and learning in that deep way that comes from careful attention to each detail of the script. I’ve had that pleasure recently with King Lear; Henry IV, Part 1; Henry IV, Part 2 and this summer’sThe Winter’s Tale. It is like nothing so much as making a new friend, one who will be in your thoughts and dreams forevermore. 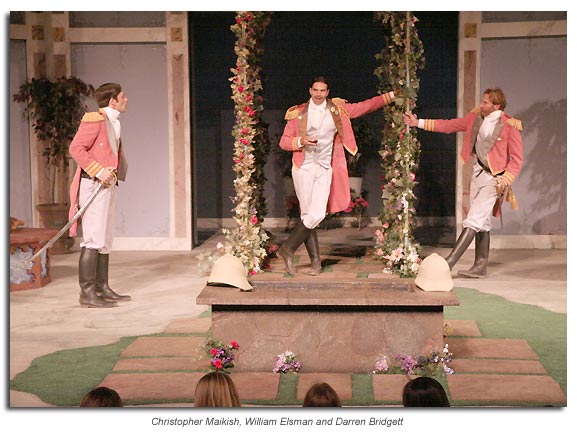 Conversely, there is perhaps even more to be said for re-visiting and savoring the companionship of an old friend, one whose strengths you admire, whose weaknesses you lovingly indulge, whose familiarity is comforting, and whose possibilities you inevitably see in a new light with the passage of time. 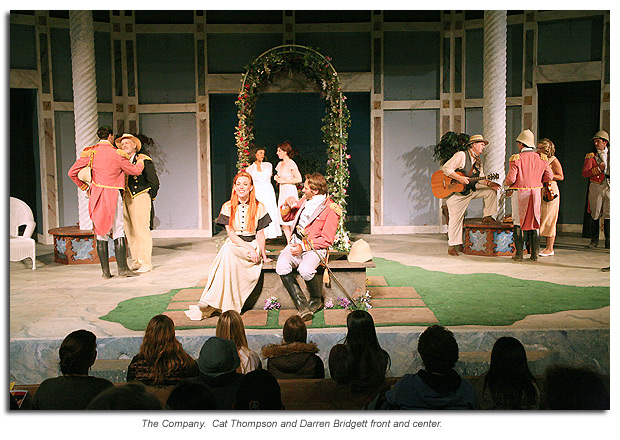 For me, such an old friend is the magnificent Much Ado About Nothing, one of the half-dozen most requested and enoyed comedies in the world’s canon. This marvellous Mediterranean mixture of triumphant love, mischief, and malapropisms (which should be called “dogberries”) has graced our stage in 1995 and 2002 and surely will return in the not-too-distant future. There’s nothing like old friends. 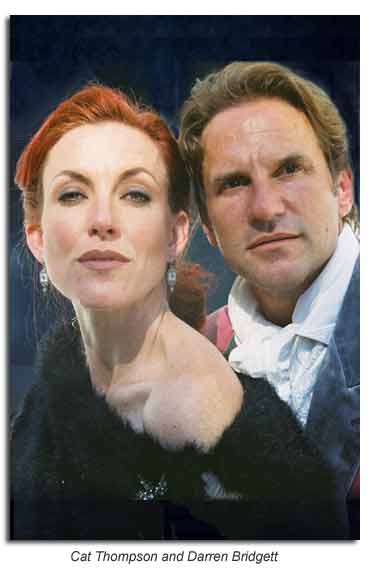 Compounding the metaphor, we are doubly delighted to welcome back to our stage two of our favorite actors, Cat Thompson and Darren Bridgett, for the roles of Beatrice and Benedick.

I always encourage actors to tell me their dream roles; occasionally I’ve had the joy of choosing a production for a specific actor to play one of those roles.

This Fall, opening my mail, I found a small card; inside was written, “Don’t be a d***, Bob. Let us play Beatrice and Benedick. – Cat and Darren” Despite the excorable poetry, the sentiment seemed sound. Out of this humble beginning, the current production was born.” 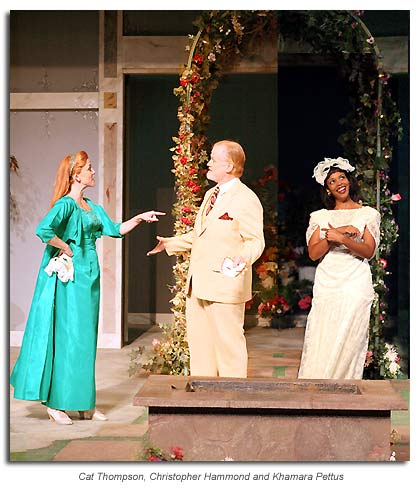 “Much agog over stellar close to Marin Shakes’ summer season
Saving the best for last, Marin Shakespeare Company gives audiences a delightful ride in its final ’08 production, Much Ado About Nothing….Darren Bridgett and Cat Thompson, armed with Shakespeare’s clever lines and a great deal of charm, carry off this battle of the sexes beautifully. She strides across the stage like a ’30s movie heroine (the production updates events to the screwball era), a hard-boiled woman who uses words to hide her soft yolk.

He blusters and sputters, maintaining his warrior’s posture until the moment he melts like a warm chocolate. The couple’s well-choreographed mating dance is at the heart of MSC’s engaging production that has audiences melting in pleasure….Schmidt is the best kind of modern scoundrel, attractive and youthful, one who has fully embraced his dark side, 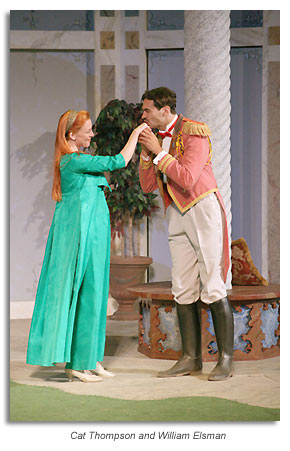 Director Robert Currier has assembled an appealing cast for this late summer romp. William Elsman makes Don Pedro into such an alpha male that when he proposes to Beatrice, seemingly in jest, he’s quite prepared to take her on. Elsman, seen earlier this summer as the revengeful Salieri inAmadeus, shows a broad comic streak.” 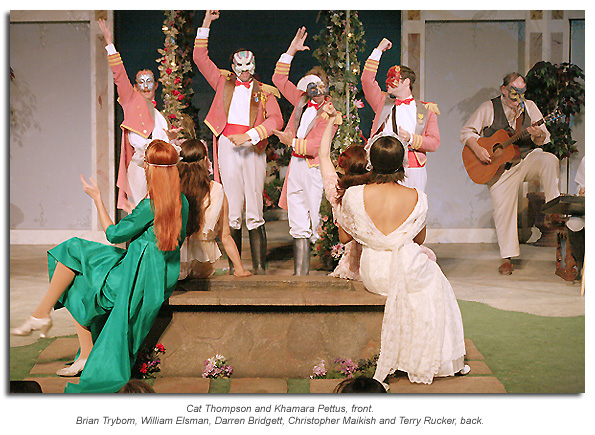 “Cat Thompson plays a fiery Beatrice—no intentional reference to her beautifully coifed hair—too intelligent and too heavily armed with cynicism to willingly step into the snares of love….Thompson creates a Beatrice so dazzling that even the most prudent suitor would forget to sign his portion of the pre-nuptial contract. 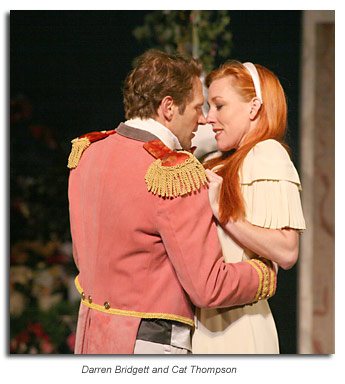 Darren Bridgett who has practically grown up on Marin Stages—as an actor that is—gets measurably better every season: he stands straddling the stage: one foot in comedy and one foot in acting; and he does remarkably well in both domains. Darren’s delivery—highly animated, densely punctuated with comic facial expressions and physical comedy—brings the audience to an understanding of the richness of Shakespeare’s humor regardless of the degree of fluency one enjoys in Elizabethan English. Darren is arguably the best comedian north of the Golden Gate and south of Prince Rupert Island.

Looking at the polish of this production, it is hard to believe that Shakespeare survives on a shoestring. The secret is resourcefulness: artistic directors Robert and Lesley Currier are magnets for earnest talent.

Michael Berg—the costume designer—is one of the more conspicuous talents in the crew….The Set Design, by Bruce Lackovic, is befitting the opulent Italian Villa it portrays: then too, it is rugged enough to double as a Jungle Jim: half the cast has the opportunity to climb on his Rose Pergola; Darren Bridgett swings inverted by one foot from this Pergola, and yet—to everyone’s relief—its budges nary an inch.

MUCH ADO ABOUT NOTHING is quality entertainment that is both edifying and hilarious; you will not find such a winning combination anywhere: the ballet, an opera, the drag races, kickboxing nor a tractor pull. So drop the TV remote and bring the kids out for audience friendly Shakespeare that the whole family will enjoy.” 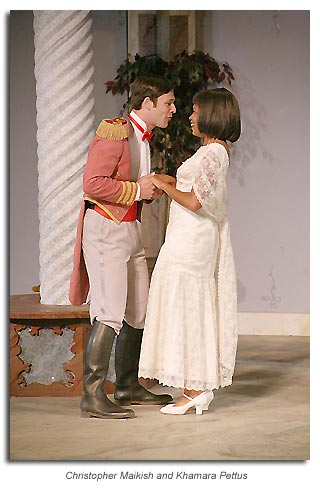 “Marin Shakespeare Company can look forward to the group’s annual hiatus buoyed by the warm reception being given its bright and inventive production of ‘Much Ado About Nothing.’…While “Much Ado” isn’t ranked among Shakespeare’s greatest works, when done well it is certainly a felicitous way to spend a late summer evening. As if sensing the opportunity, Marin Shakespeare Company doesn’t disappoint.

“Marin Shakespeare Company’s “Much Ado About Nothing” gives the audience much to laugh about. It features a long time company performer, Darren Bridgett as the witty and confident Benedick. For me, Bridgett nearly steals the show with his playful skills on stage. Director Robert Currier was kind enough to lend Bridgett some freedom on stage…. 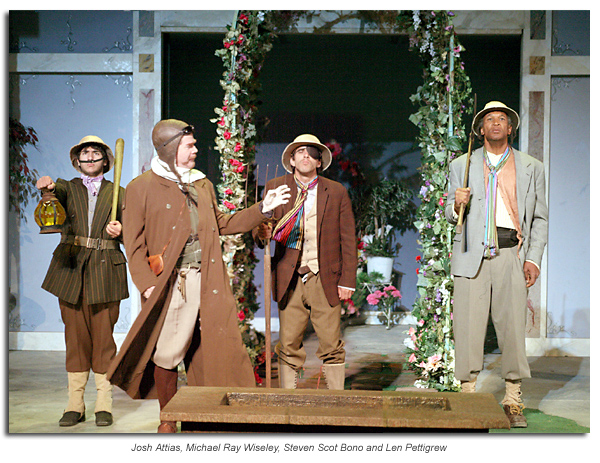 The music was a great treat. Sound designer, Billie Cox, composed original scores for the song pieces….Linnea George as Ursula plays the violin. Terry Rucker as Friar plays guitar. Mick Berry as Conrade beats out on the drum and dulcimer. As Claudio, actor Christopher Maikish earned rave applause as he sang a very bluesy song when his character pines over the loss of Hero. Not only does he have a wonderful voice, his emotions strike the right chords in us. It stood out as one of the most unforgettable moments in the play…. 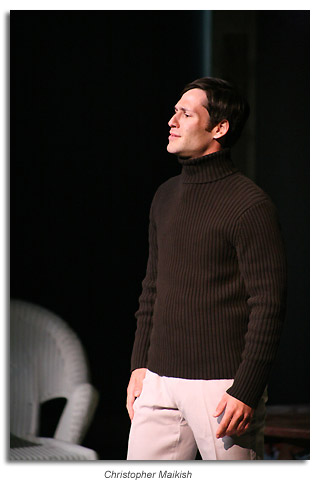 Other cast members contribute to the production’s comic quality. As the evil Don John, Ryan Schmidt, also has fun with his villainous role. He portrays the bastard’s dark side, yet at times, an antic side as well. Michael Ray Wisely as the Dogberry delivers a hilarious depiction of a cop who takes himself too seriously. He matches his motley crew of Verges played by Michael A. Berg and others. Their inept buffoonery resembles the Keystone Cops….Overall, the laughter and enjoyment of the audience had marked the evening at MSC’s “Much Ado About Nothing.”

Maria Vrobel – Listen and Be Heard 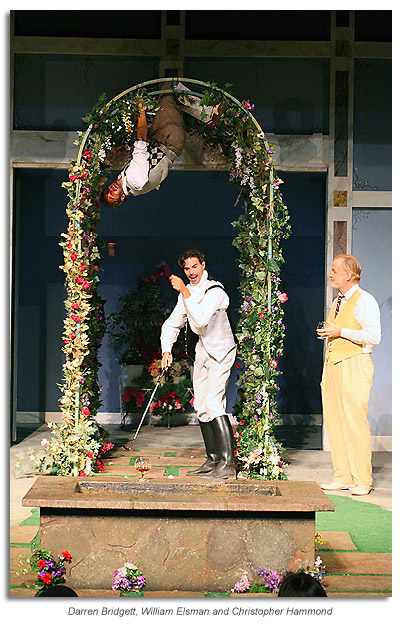 “There are many ways to make Shakespeare’s plays palatable for diverse audiences thus encouraging the reluctant to attend performances. September’s balmy Bay Area weather, especially in Marin, is an added incentive to plan an outing for Marin Shakes final offering of the season that is designed to keep you laughing….

The scene where superb actor Darren Bridgett, hitting soft golf balls dressed in a golfer’s outfit before climbing over the wooden benches was gobbled up by the audience. Later, Bridgett displaying his athletic ability as he climbs a very sturdy arched trellis ending up hanging by one foot brings a volley of gasps. Throw in on-stage music provided by Linnea George on violin, Terry Rucker on guitar and Mick Berry drums/dulcimer and encourage audience participation to increase the fun.”

“I have seen many productions of this idealistic comedy but this is the wildest version yet.….Robert Currier’s production is exemplary in all details. There is a lot of slapstick between Darren Bridget and Cat Thompson. Both actors are standouts and provide much of the production’s best comic moments.

Bridget plays Benedick as a bundle of inconsistency, his haughtiness and wit battling his various neuroses and romantic idealism for control. In an attempt to conceal his presence from his friends, he resorts to coming into the audience and sipping wine from an unsuspected spectator. It is a hilarious scene and he brings down the house with his antics. 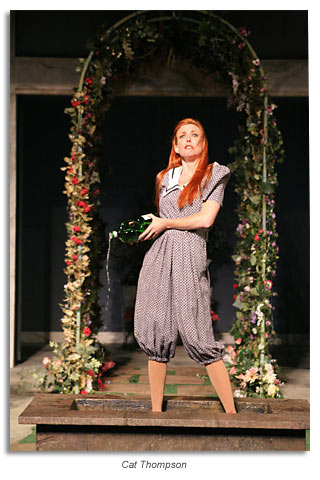 In one scene, Cat Thompson walks around with a half gallon bottle of gin, drinking very liberally from the bottle. These two actors bring an implausible, spontaneous chemistry to their sparring, emotional relationship.

There is also a madcap scene with the bumbling constable Dogberry, played hilariously by Michael Ray Wisely, in the second act. His little troupe of law enforcement officers are strictly out of a Monty Python sketch. 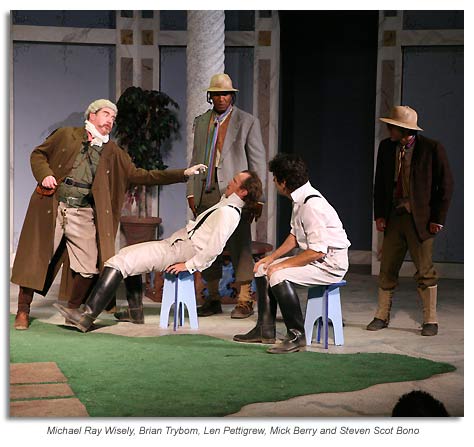 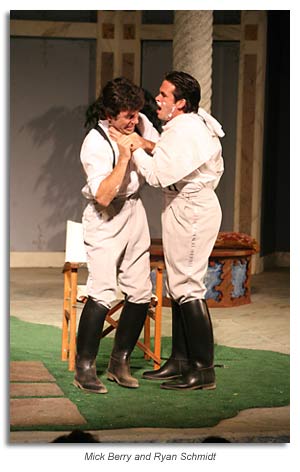 Christopher Maikish’s Claudio is wonderful, a shy, inexperienced boy genuinely horrified at what he sees as Hero’s betrayal. He even sings a melancholy love song in the second act. Khamara Pettus as Hero gives a lovely performance….William Elsman gives a commanding performance as Prince Don Pedro of Aragon. Ryan Schmidt manages to give the one-dimensional villain Don John a clinically depressive motivation for his actions on stage.” 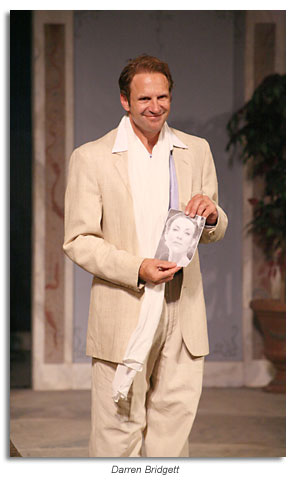 “Marin Shakespeare’s outdoor production was set in the romantic period of the 1920s to 1930s featuring costumes and music from the era with leisure activities including cocktail parties, tennis and golf, providing the many backdrops for playing out scenes…. 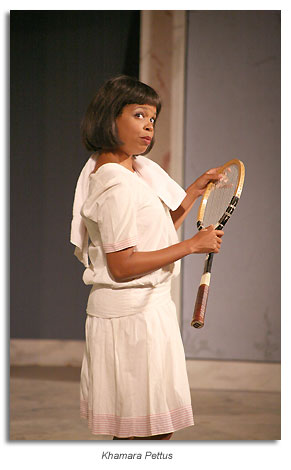 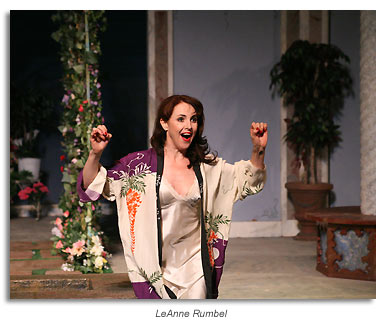 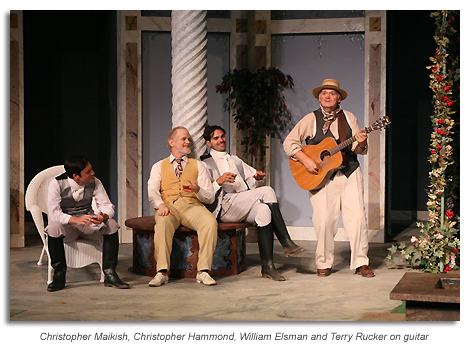 With accomplished musicians on hand, Billie Cox seized the opportunity to write music perfectly suited to their instruments–a hammered dulcimer, violin and guitar–with a variety of popular music styles from the era between the wars. 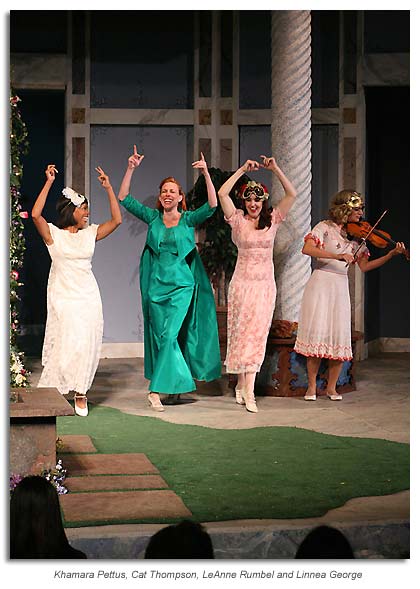 Robert Currier directs Much Ado as a screwball comedy with imaginative bits of business throughout.…Cynthia Pepper’s choreography of the dances was delightful.”