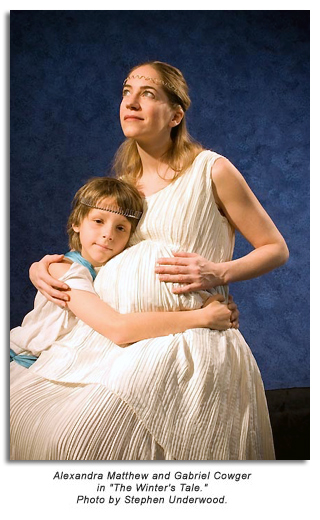 As far as we can tell, this production was the first ever of The Winter’s Tale in Marin County. When both Jim Dunn and Ann Brebner can’t remember any other production, you know it’s probably a first. WithThe Winter’s Tale, our 20th Shakespeare play, Marin Shakespeare went over the halfway mark of the canon produced at Forest Meadows. (Although students in our education programs have performed Titus Andronicus and Love’s Labour’s Lost, which have yet to make it to the main stage.) It’s a rarely seen and sometimes misunderstood late romance. But for those whom it touches, it carries a weighty emotional punch. 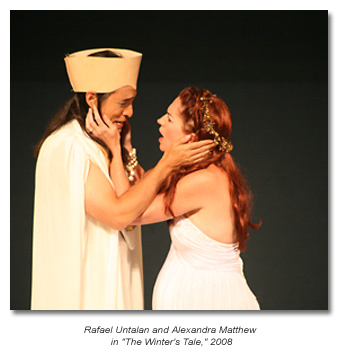 Several talented actors joined our company for this production: Rafael Untalan straight off of three seasons at Ashland, Celia Madeoy who flew in from Arizona to audition and stole the role of Paulina, Jerry Hoffman from L.A. who acted with Bob Currier in college 42 years earlier, and Michael Ray Wisely who is a leading Bay Area actor we had long admired but never worked with. 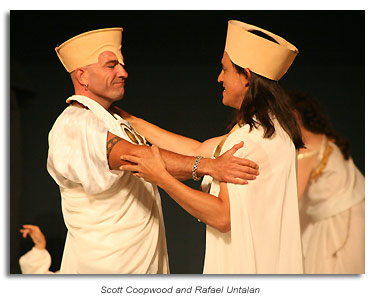 We were also joined by many old friends, including Alexandra Matthew who we had long considered perfect for the emotionally vulnerable yet dignified lead role of Hermione. 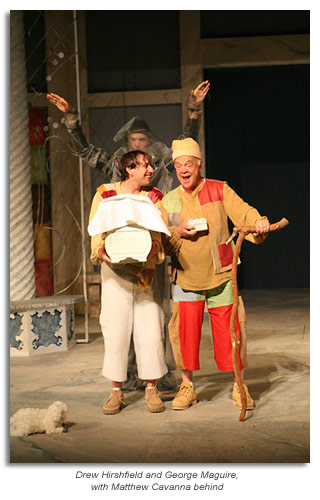 Pairing comic geniuses George Maguire and Drew Hirshfield was a match made in heaven. Another great new find was Mark Robinson, who not only played the role of Florizell but also served with incredible skill as our Technical Director after the sad departure of long-time T.D. Ian Marsh who moved to L.A. to marry one of our former Interns. (Congratulations Ian and Tiffany!) Mark’s talented and dedicated wife Kate Magill took over as Marin Shakespeare’s new Education Director this year, and the infusion of energy from this pair has been fabulous. 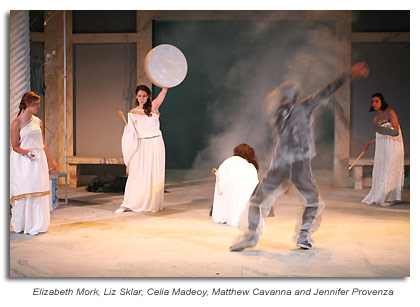 Another delightful first was Kate Fox Marcom in the role of Perdita; this 17 year old actress and dancer is the daughter of one of Bob’s other college friends and is destined to have a very bright future onstage. And adding a strangely beautiful element to the production was Matthew Cavanna, whom we lured into bringing his talents as an actor, dancer and musician to add a very special dose of spirit to this wonder-filled story of loss and redemption.

“Rafael Untalan (a preening dandy in ‘Amadeus’) pulls off a similarly impressive feat with King Leontes’ abrupt jealous rage in ‘Winter,’ making the clumsy device intensely dramatic and moving – with considerable help from Alexandra Matthew as his shocked, distressed queen, Celia Madeoy’s forthright Paulina and other members of the court (including Elsman, Michael Ray Wisely and a nicely focused young Gabriel Cowger as the child prince)…

.there’s some deft comedy by Jerry Hoffman (as the con man Autolycus), Hirshfield and George Maguire.” 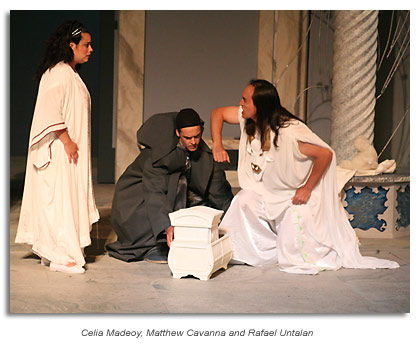 “…excellent ensemble….The comedy is well done and the dances are graceful. And Matthew Cavanna’s constant presence onstage as ‘Time’ is acrobatic, brooding and always watchable.” 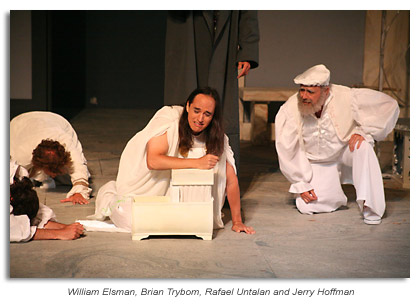 “MSC’s production successfully brings out the tenderness between Leontes and Hermione, and the awful turmoil caused by their relationship. Rafael Untalan is stunning in his anger and regret as Leontes, giving a new perspective in the role of a man overtaken by emotion. Alexandra Matthew is tremendous as Hermione, pleasant and loving, then stoically noble in accepting her husband’s injustice… 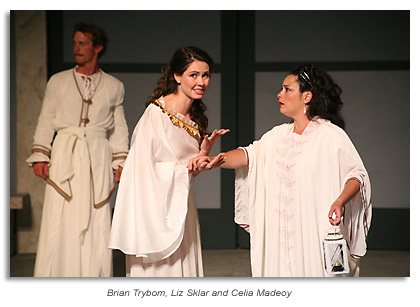 In other roles, Celia Madeoy is memorable as Paulina, the strongest voice against the king’s madness; her character dominates the play, and the actress takes over the stage.” 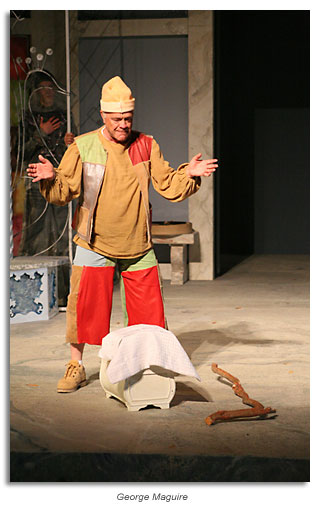 “This lovely and magical Winter’s Tale casts a heart tugging spell that is almost impossible not to surrender to….[it] take[s] on a beautiful, aching grandeur that borders on the magnificent….Alexandra Matthew is stunningly good, bringing palpable emotion and clarity to scenes that are among the Bard’s most preposterous plottings.” 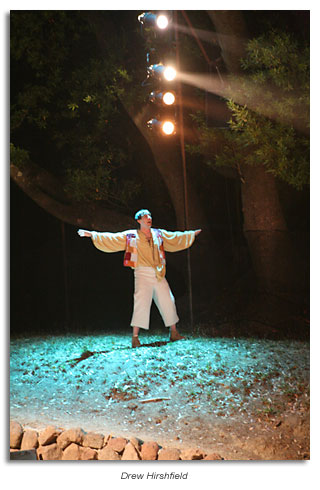 “Spousal team directors, Lesley and Robert Currier draw in all elements in Marin Shakespeare’s production of this popularly performed piece. My favorite part of the set design was an antique toy wagon, which was painted white. It carried great significance towards the end of the play….Cavanna both opens and closes the play with a long hornpipe echoing the passage of time. Cavanna moves wonderfully to the choreography of Cynthia Pepper, aptly enhancing the production…. 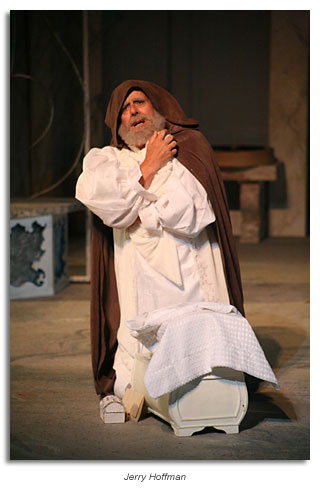 Untalan does not play on his character’s rage. Instead, we see a slow progression of his downward spiral. He uses the imagery humorously, allowing the comedy to flow in. I appreciate Untalan’s reaching out to the audience to draw us in to Leontes’ abyss… 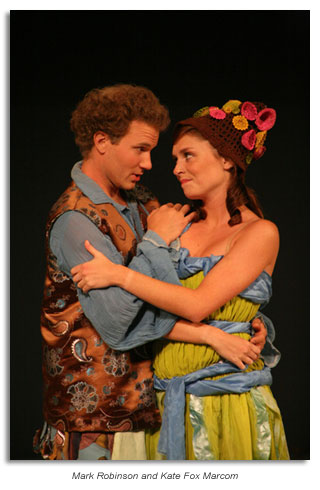 Robinson and Marcom carry a great chemistry on stage, reminding us of the excitement of teenage romance….Gabriel Cowger, the youngest of the cast, gives a very impressive performance as Mamillus, Polixenes and Hermoine’s son. The sixth grader seems to be at ease with Shakespeare as well conveying virtual feelings…. The Curriers created an original, yet profound ending to ‘The Winter’s Tale.’”

– Maria Vrobel, Listen and Be Heard 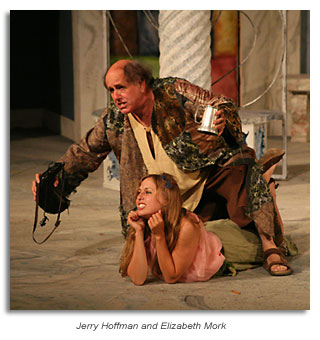 “…the entire cast does justice to Shakespeare’s lines …. Rafael Untalan as Leontes progresses from hail-fellow- fast friend of Polixenes to raging jealousy is a study in character development. Coopwood’s Polixenes defines the word regal. Michael Ray Wisely as Camillo calmly and elegantly underplays the role to perfection. Jerry Hoffman switches from the subservient role of Antigonus to become the scene ‘stealer’ as Autolycus the cozener. George Maguire challenges Hoffman as “best in show” from his entrance baaing like a sheep. However, he has help from Drew Hirshfield as they feed off each other as father and son. Mark Robinson and Kate Fox Marcom exude charisma and are completely believable as the lovers.” 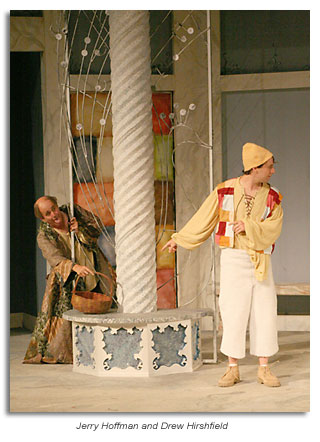 “It is deplorable that ‘The Winter’s Tale’ is so seldom revived. For this dramatic romance affords delightful and comprehensive entertainment….The spirited choreography is by Cynthia Pepper. Billie Cox composed some interesting original music. 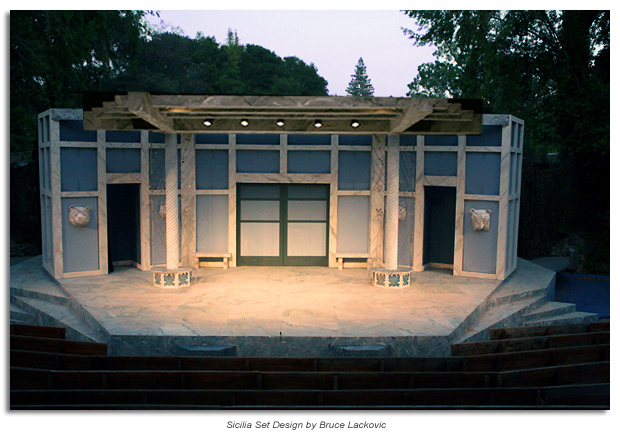 Bruce Lackovic designed some good contrasting sets for Sicilia and Bohemia. I was particularly impressed by Abra Berman’s magnificent costumes—all characters wore white in Sicilia and very bright colors in Bohemia….Leslie [sic] and Robert Currier deserve a great deal of credit for bringing this complex and wonderful production to the Marin Shakespeare Festival.”
– Flora Lynn Isaacson

“This summer’s Winter’s Tale was co-directed by both Curriers – a first-ever experiment – and it perfectly reflected their differing directorial styles, with Lesley handling the somber Sicilian scenes with which the play begins and ends, and Robert taking over for the play’s raucous Bohemian middle.

‘Time’ – Shakespeare’s character who explains the play’s curious sixteen-year gap at the start of Act IV – was converted in this production to a thematic presence who, accompanying himself on the largest didgeridoo I have ever seen, interacts with the characters at various points throughout the play, and stands in for the ursine presence of Shakespeare’s famous stage direction, ‘exit, pursued by a bear.’ 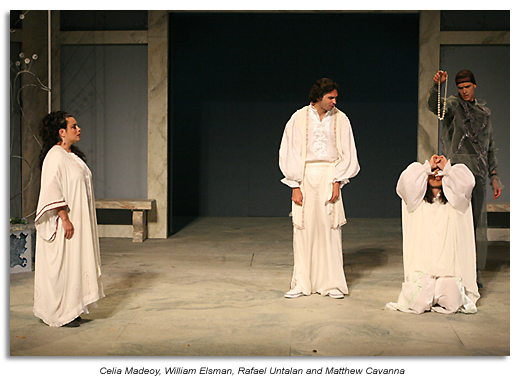 Rafael Untalan (with three Ashland seasons under his belt) was an intense and compelling Leontes in this altogether satisfying production, while Celia Madeoy was an extremely convincing Paulina and the young Kate Fox Marcom proved an especially appealing Perdita.” 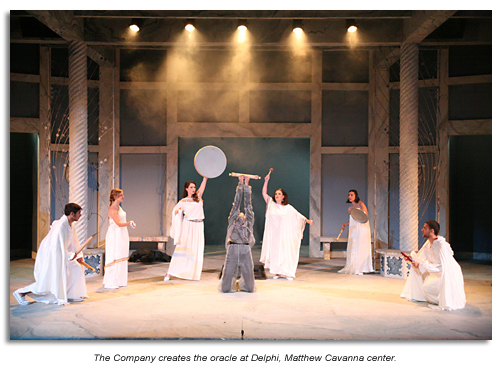 “The Marin Shakespeare Company conjures a unique production by making Time a central character….Cavanna puts his past three years of “pursuing interests in movement, sound, and the ritual of personal transformation” to good use in this production, opening the stage playing a six foot didgeridoo that he handles with precision. This ritualistic instrument is thought to achieve communication across long distances, which is certainly applicable in A Winter’s Tale considering the lost Perdita. Cavanna is onstage for most of the production, whether breathing life into the didgeridoo, keeping time with clapsticks or some other makeshift instrument, spinning clockwise, or seemingly convulsing to the action before him. At times he sits with upright posture in observance or in wait. 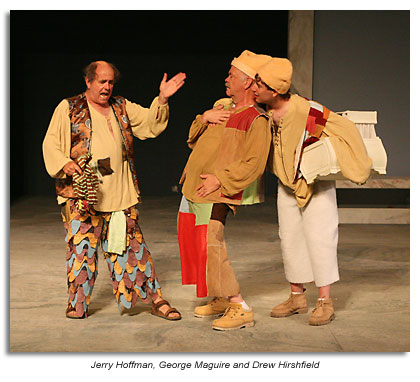 He is also the vessel through which Apollo speaks his unheeded oracle, and many times throughout the production we are reminded of Time’s omnipotence as he not only speeds time, but at times stops it altogether….He’s a unique expansion in this play, and almost never overkill (almost) on the convulsions that almost make sense. Cavanna also morphs into the famous stage direction of the bear that chases Antigonus offstage. This scene is dark and proves a frightening change from it’s more commonly comedic staging….

George Maguire and Drew Hirshfield take the comedic reigns in this production as the Shepherd and Young Shepherd, portraying the dimwitted yet loveable father/son duo with quick tongues. Maguire adds more to the already silly conversations by speaking with a mostly consistent twang in his voice and repeating the last word of his Hirshfield’s lines.

It’s tough to take your eyes off of Maguire’s antics and expressions even when he’s not the focal point of the scene. And speaking of scenes, Time intervenes in Maguire and Hirshfield’s discovery of the infant Perdita with two stuffed lambs in an hysterical nativity scene to remember…. 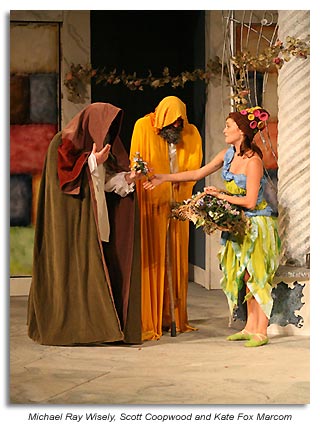 Marcom is young, fresh-faced, and a stunning girl….

Bruce Lackovic’s simple set design changes from the cold and icy blue and white of Leontes’ kingdom, to garlands of flowers for the sheepsheering game, during which the male peasants toss fardels of freshly sheared wool around in a competition reminiscent of musical chairs. Mind you, there are no chairs involved. The scene is exhilarating and offers the feeling of what these peasants may have actually done during such springtime celebrations…. 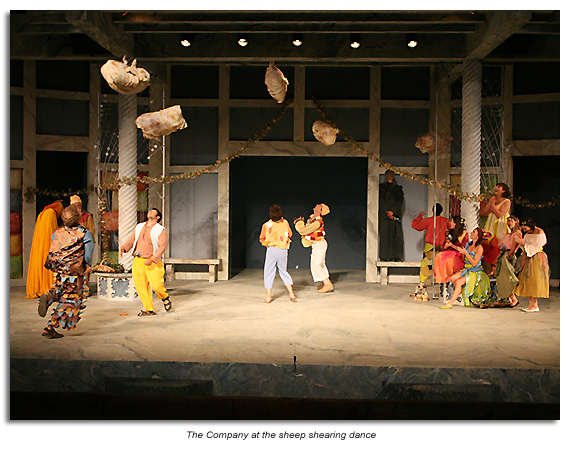 The most potent player on this stage is Celia Madeoy. Madeoy plays Paulina as a feisty and tough little scrapper who uses her sharp tongue well. “