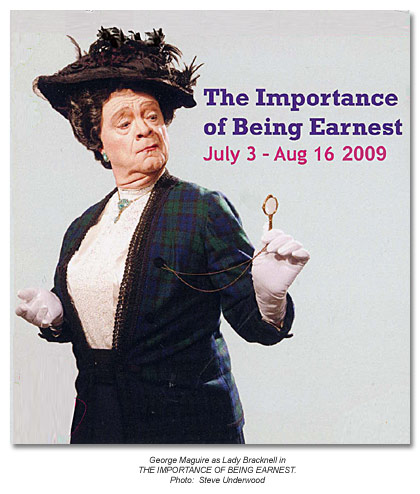 The Importance of Being Earnest has long been a favorite play of ours. It was the inaugural production of the Ukiah Players Theatre (UPT) in 1977, with Bob as Jack and Jarion Monroe as Algy. Coincidentally, I (Lesley) played Cecily in a production that same year at the Landon School; it was my first high school lead, as a freshman, and I beat out Julia Louis-Dreyfoos for the role…of course, at 14, I hated kissing the senior boy who played Algernon! Years later, after Bob and I had met in Ukiah, we planned another UPT production and looked forward to playing opposite each other. However, I got hired to go up to Ashland in the 1987 season, and Bob ended up doing the play without me. So the Marin Shakespeare production was our first working together on the play.

It came together like a dream. The first actor we thought of was George Maguire for Lady Bracknell. Then Darren, Bill, Cat and Alex as the four young lovers seemed pretty obvious to us as well. Jack Powell was a natural for Chasuble, and we wanted Lucas McClure and his guitar-playing skills for Twelfth Night, and knew he’d do a bang up job with the two servants. There were great roles for seven of our favorite core company members.

Then Joan Mankin phoned. We’ve been long-time admirers of Joan’s brilliant stage work. She is a Bay Area treasure: a uniquely quirky and absolutely fabulous actress who I’d watch read the phone book any day of the year. When Joan told us she had a little bit of time in her summer schedule, we were thrilled. When she came and read Miss Prism, we couldn’t imagine anyone else in the role. Joan brought her massive comic creativity to a role everyone kept wishing had more stage time. That’s Joanie – even in a one-woman show, you’d want to see more of her onstage.

To any actor out there wondering if there’s any reason at all to attend an audition when producers have so many people in mind for roles prior to casting, all I can say is we ended up with twelve featured actors (out of a total of 24 this season) brand new to Marin Shakespeare, half of whom we’d never heard of before they walked into our general auditions that January. So do keep auditioning! 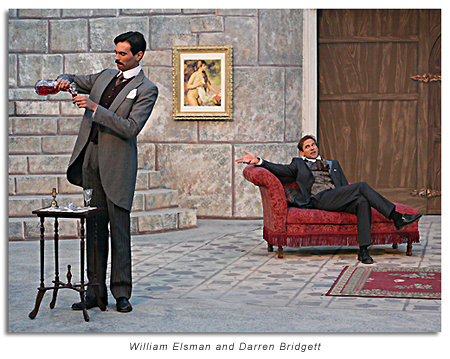 After casting, Bob was in Wilde heaven. He’s a Wilde buff to begin with, and can quote unimaginable numbers of Wilde epigrams in the best of times. Now he became a Wilde detective, seeking out nuggets of wit, many of which snuck their way into the script, adding a couple dozen new jokes – all pure Wilde. This process sort of reminded me of how Shakespeare must have felt turning the Plautus story into The Comedy of Errors: “hey, I can make it even FUNNIER!” He would come home from rehearsals giggling about the fun staging he and the actors found every day. Phrases like “not even for ready money,” and “the weather still continues charming” became irresistible.

Bob’s pre-show and Shakespeare Dinner talks never failed to elicit raves from audience members. He was in his element, and it showed. The production was called by many one of the best we’ve ever produced. Bravo! 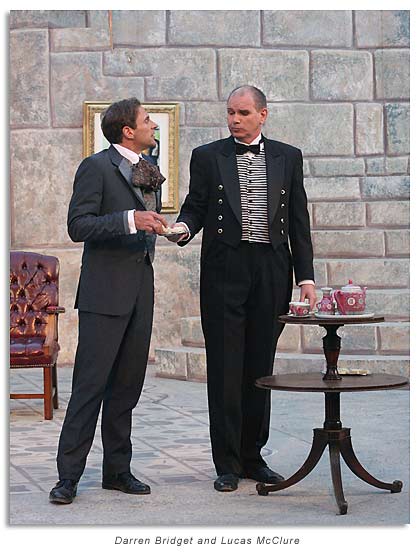 “Shakespeare, were his mortal coil as immortal as his words, would have been 445 years old this year. Marin Shakespeare Company is 20, which still feels like a big number. Welcome to the celebration!

The three plays this summer were selfishly chosen to give pleasure. The Importance of Being Earnest is one of the wittiest, most delicious pieces of theatre ever written and one for which we have a personal attachment; when three different patrons last summer asked why we’ve never done it, it felt like a sign… 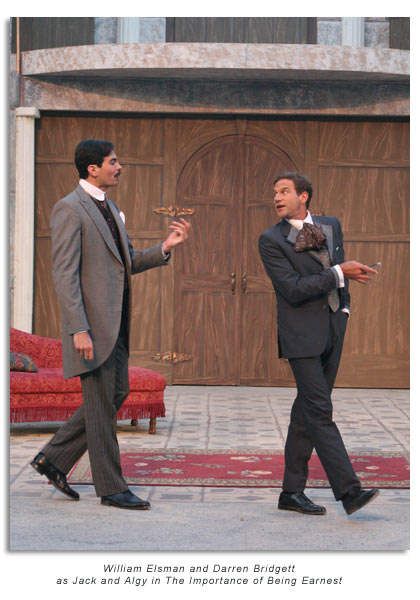 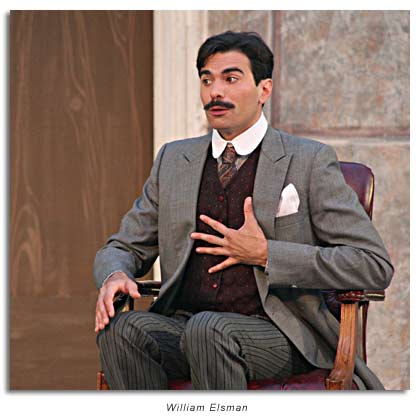 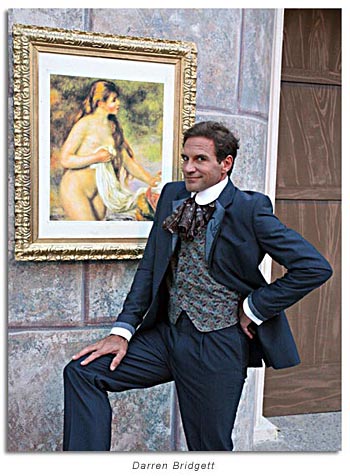 “Marin Shakes delivers Oscar-worthy performances.…
From the moment Marin Shakespeare’s production of The Importance of Being Earnest started and aristocratic Algernon Moncrieff (played with devious charm by Darren Bridgett) stepped off the stage to sip audience members’ wine… it was clear this was going to be a Wilde night.… 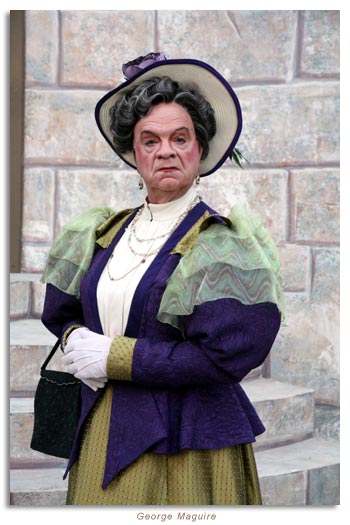 it would be hard to surpass the magnificent matronly presence of Lady Bracknell (there couldn’t possibly be a better woman for this role than Mr. George Maguire) who, with a simple but loaded utterance of the word ‘handbag,’ so eloquently relays the zeitgeist of late-Victorian era aristocracy in England….

The production design was impressive–a mammoth structure designed by Mark Robinson depicting a magnificent two-story mansion that converts magically…into a lavish countryside estate….Marin Shakespeare Company’s opening production for the season is a fantastic romp, one in which you–as well as the actors, it seems–are sure to have a salaciously good time.” 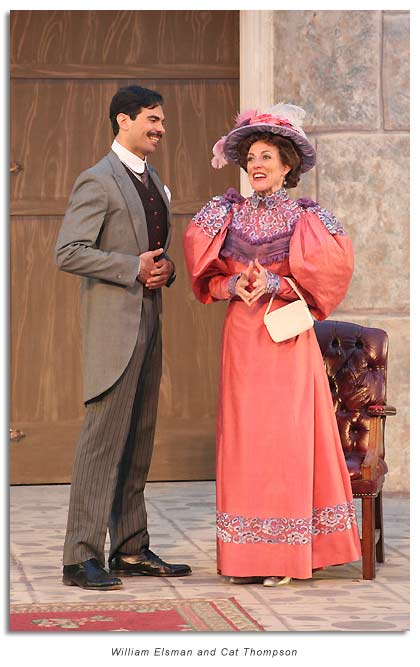 “Lucas McClure is solid as Algy’s snooty butler….Wilde’s wit positively sparkles in director Robert Currier’s lively production….The comedic chemistry between the two male leads is the pounding heart of this production, with William Elsman a refined yet excitable Jack (with a strong voice that’s helpful outdoors) and Darren Bridgett a nicely cynical and dissolute Algy….Cat Thompson is a bright and alluring Gwendolen, rattling off intricate witticisms with remarkable nimbleness and aplomb….Alexandra Matthew makes a delightfully flighty, petulant ingenue as Cecily. The scene in which the two move from instant gushing friendship to catty rivalry and back again with immaculate cordiality is priceless. Patricia Polen’s bright period dresses are alternately fabulous and gaudy in all the right places. Veteran clown Joan Mankin brings sharp comic timing and a touch of slapstick to Cecily’s prim tutor, Miss Prism. The awkward romantic tension between Prism and Jack Powell’s mild-mannered Reverend Chasuble affords some hilarious moments, particularly in her gasping reactions to his inadvertent double entendres….What lingers is the warm afterglow of a sharp and canny staging of Wilde’s arch comic classic by a director and cast that really have a handle on his humor, and make amply sure the audience gets it, too”

“George Maguire does not camp it up as Lady Bracknell but plays the character straight. He is superb in the role and his delivery is perfect….Darren Bridgett is splendid as the despicably debonair Algernon Moncrieff….William Elsman acquits himself with reserve as John Worthing. Both originate marvelous chemistry with pitch perfect comic timing and crisp delivery of the playwright’s words….Alexandra Matthew gives a delightful naïve performance as Cecily with some great Wilde’s epigrams….Cat Thompson gives a knockout portrayal of the self-assured Gwendolyn….Joan Mankin as Miss Prism and Jack Powell as Reverend Chasuble give engaging performances….Mark Robinson’s set is an excellent two-story piece with the library on the top floor….Patricia Polen has designed some elegant Victoria costumes for both male and female….Robert Currier has helmed a smoothly pace production….Billie Cox’s sound design is excellent.” 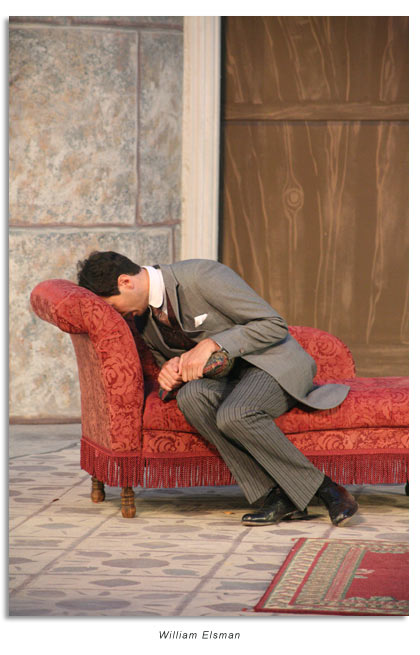 “The costumes and set dressings, as well as the speech patterns and physical gestures all properly evoke the era, but some modern touches accentuate the fun….The actors deliver the lines with a well tuned mix of a distinct, but not exaggerated British accent.” 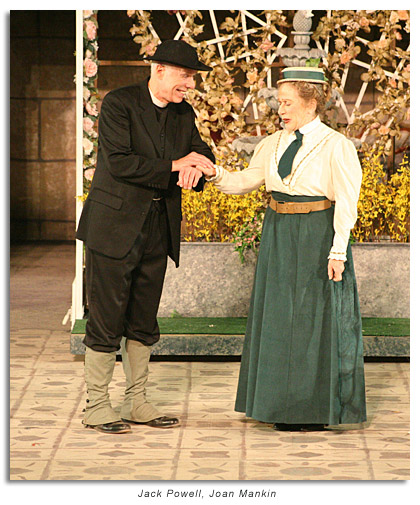 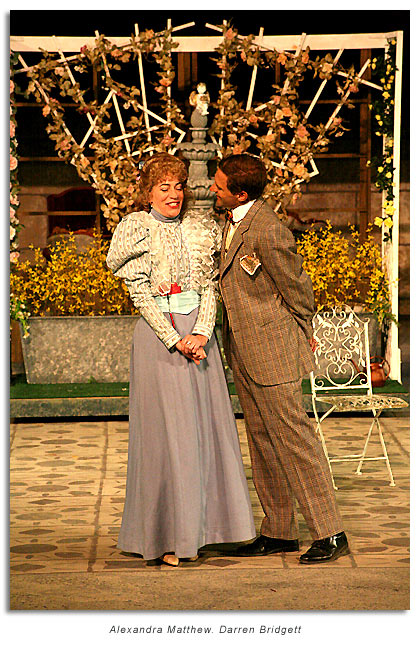 “Marin Shakespeare Company’s all-star production offers a witty and gleeful visit to Oscar Wilde’s imagination….Director Robert Currier has adds some fine directorial touches to the script….The Importance of Being Earnest is full, flamboyant, outdoor presentation of a Victorian play. Wilde would have loved it….Patricia Polen’s costumes are lushly Victorian and topped with lavish wigs.” 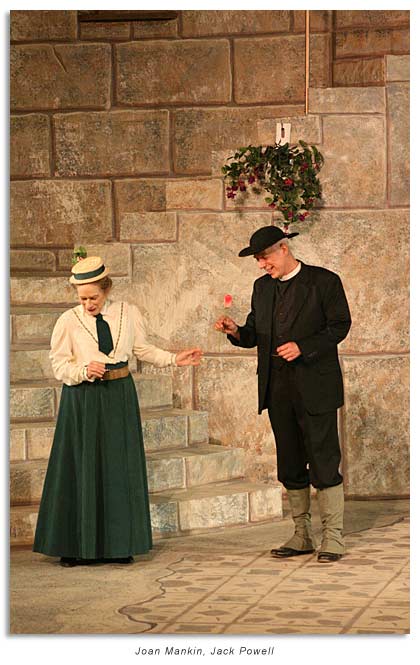 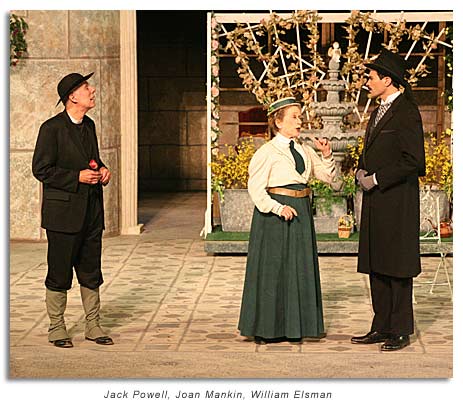 “The production is rich with actors who do justice to the play’s wit, but none more than Darren Bridgett as Algernon….Mr. Bridgett delivers some of the playwright’s most quoted lines…with the blitheness that makes them seem fresh. William Elsman displays wonderful ease and comic timing as Jack….Alexandra Matthew makes Cecily…sweetly innocent without seeming stupid. And Joan Mankin enlivens the role of Miss Prism….Miss Prism’s relationship with Reverend Chasuble, played very effectively by Jack Powell, extracted every laugh possible….

The production, directed by Robert Currier, is a delight. The set, by Mark Robinson, changes from a London Townhouse to an English Country manor to a garden at the country manor. The costumes, by Patricia Polen, are rich and period appropriate. Ellen Brooks lights the stage very effectively….The delight in this play is hearing Wilde delivered so well, with such evident joy in the depth of his silliness. Marin Shakespeare Company’s opening production for the season is a fantastic romp, one in which you as well as the actors, are going to have a wonderful time.”
– David Fickbohm, Theaterkat’s Blog 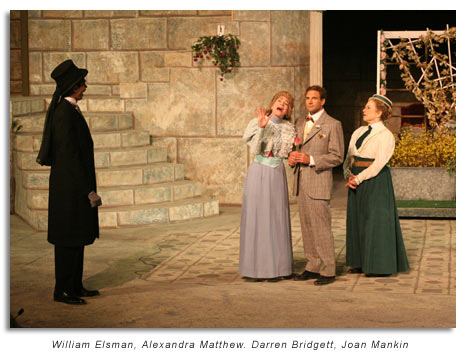 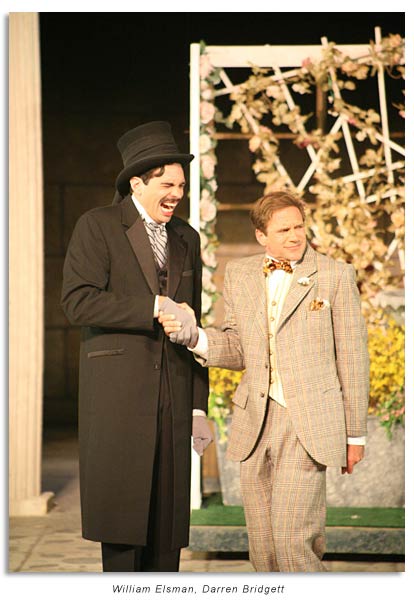 “ A WINNER. One may have trepidations about attending an Oscar Wilde play performed by an American theatre company, but set aside any apprehensions concerning Marin Shakespeare Company’s The Importance of Being Earnest that is a solid winner guaranteed to generate your applause. This all Equity production’s talented cast, directed by Robert Currier hits all right notes, includes one of the best portrayals you will ever see of Lady Bracknell played by Mr. George Maguire….All the actors do justice to the play’s wit, but none more than Maguire who plays Lady Bracknell absolutely straight and never once steps in parody….Darren Bridgett gives a remarkably funny and exuberate performance as the foppish Algernon… His scenes with William Elsman as Jack Worthing emanate marvelous chemistry with their pitch perfect comic timing and clear enunciation of Wilde’s droll yet cutting satire: ‘Truth is rarely pure and never simple.’ Elsman in the protagonist role of Jack nee Earnest has a crisp delivery well suited to project meaning into Wilde’s words even when they are supercilious….Alexandra Matthew as Cecily displays sweet, charming beauty and innocence… and Jack Powell’s Reverend Chasuble add another layer of humor that is exaggerated by Currier’s sharp direction of physical shtick.”
– Kedar K. Adour, MD, Theatreworldinternetmagazine.com 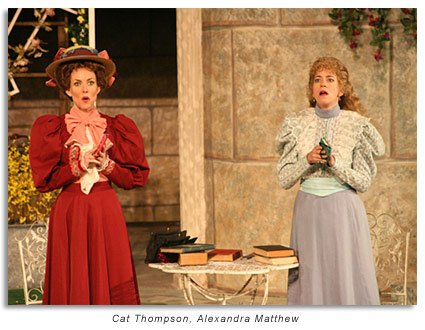 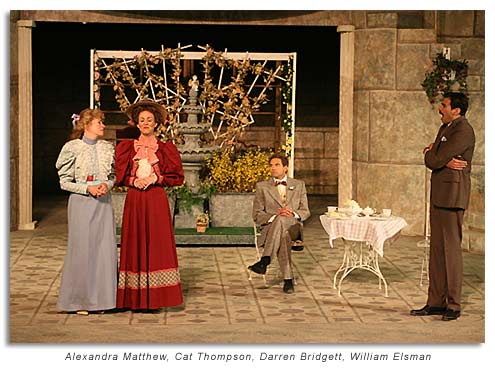 “…Gwendolyn, played with beguiling charm by Cat Thompson. Darren Bridgett, … plays Algernon as a sophisticated man of the world. William Elsman…is really the heart of this production. His Jack zings from one emotion to the next — smug man about town to smitten puppy dog to irate parental figure — and makes us believe every one of them….Alexandra Matthew’s Cecily Cardew…matches Bridgett’s vitality joke for joke.…strong support from Joan Mankin, who is first rate as Cecily’s governess Miss Prism and uses a sort of stammer at certain moments in her delivery that is very funny. Also notable are Jack Powell as a shy Reverend Chasable and Lucas McClure as a series of butlers….This fabulous production boasted a brilliant cast of all Equity actors who have collectively performed over 50 Marin Shakespeare roles….What a delight to report that Director Robert Currier and a marvelous cast of Bay Area actors bring depth and feeling to Wilde’s already sparkling comedy making it as emotionally rich and satisfying as it is hilarious.”
– Flora Lynn Issacson, San Francisco Bay Times