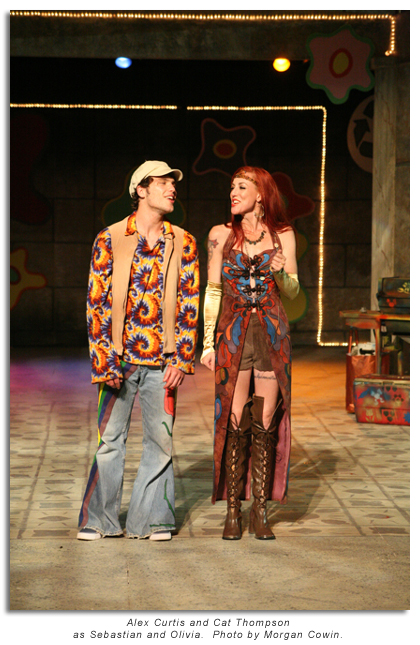 I told the cast that if they didn’t have fun doing this play, then there was something very wrong. As an actor, when you’re handed a chopped-up copy of perhaps the greatest comedy of the 17th Century (A Midsummer Night’s Dream having been written in the 16th), and then you’re asked to throw in lyrics from the 1960’s, you might doubt the sanity of the project. Certainly, at our first read-through, there seemed to be some doubt in the air. That doubt returned when actors were asked to break out of character and master passionate dance moves. And yet…

It was so much fun! For everyone. It might have taken a while for some, but every single actor in this production had an extraordinary amount of fun onstage. The audiences for the most part, loved the show – although I heard from every single Shakespeare purist who didn’t. And I sat watching with a huge grin on my face at every single performance.

Bob was in his element as Toby Belch. Jack Powell was born to play Malvolio. Camilla Ford, our Baja Shakespeare star, won over the Bay Area actors and audiences – who might have had some doubt about a 40 something woman playing a young man in love with a female lead – and charmed everyone with her goofball sense of humor, sweetness, and funky dance moves. It was awesomely fabulous to have Lucas McClure back onstage playing guitar in his sexy Dylan outfit and delighting us with Feste’s wit. And speaking of sexy…could anything be hotter than Cat Thompson dancing in ‘60’s go-go boots and Carnaby Street inspired high hippie regalia? I don’t think so.

All of the designers outdid themselves. The costumes by Abra Berman were extraordinary. The psychedelic lighting was some of the most fun ever. The sets and props with their Laugh-in inspired colors and patterns were a delight. 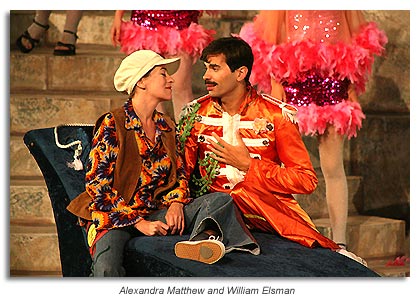 And of course, there was the true life romance. Every performance Bill Elsman as Orsino proposed to Alex Matthews as Viola – which made all of us remember his offstage proposal to her, and look forward to their very real wedding, which took place the weekend after the season closed. It was always fun to see Alex backstage arguing with her mom on the phone about flower arrangements and cakes, or planning out seating charts and events for out-of-town family and guests. I guess I’m just a romantic, but there was certainly romance in the air all throughout our summer of love. Peace and love! 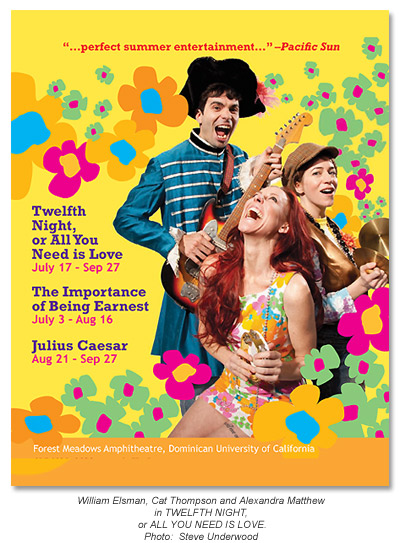 “Our first music-enhanced Shakespeare experiment was our 1997 ‘The Taming of the Shrew.’ We had seen Dennis Potter’s mind-blowing ‘The Singing Detective’ on TV and, inspired by its outrageous mixing of drama, pop music and theatricality, we created a ‘Shrew’ where Petruchio was Elvis Presley who, upon meeting Kate, sings ‘Hard-headed woman,’ and Kate was Leslie Gore who rebutted musically with ‘You Don’t Own Me.’ An on-stage juke box set the scene for a show full of music, dancing, and iconic 1950’s personalities. We loved watching the audience howl each night, despite the horror of some of the 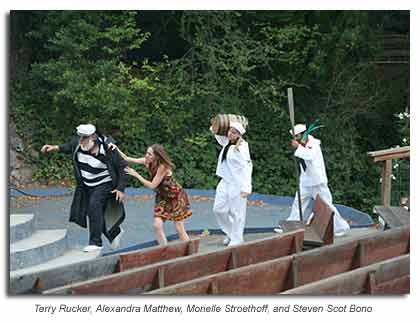 For the past nine years, we’ve gone to Los Barriles, Mexico each Spring to put on a Shakespeare play in a little town of 3,500 people on the Sea of Cortez between Cabo and La Paz. Baja Shakespeare has been revolutionary for this tiny fishing and drinking village, giving people a chance to come together to play and perform. Everyone is cast, and most of the audience knows a lot of the actors.

After a few years, some of the less culturally demanding folks said, ‘Shakespeare is great, but maybe one year we could do a musical.’ This gave us the idea to revive a version of our 1997 ‘Shrew’ in Baja, which was a huge hit. We are now practically demanded each year to create a Shakespeare adaptation that gives our ‘actors’ – local small business owners, sport fishermen, and retirees – opportunities not only to speak glorious language and enliven complex characters, but also to sing and dance. And thus was this production born. 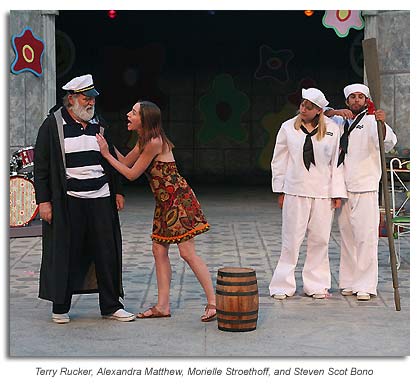 We had so much fun in Baja, we decided to see if we could re-create the spirit here in Marin. Of course, working with professional actors, and designers with access to far more resources than exist in Los Barriles, we hope to find new wonders too. In the spirit of Baja, however, we suggest that this play would go well with a couple of Dos Equis or a pitcher of margaritas.
If you love Shakespeare, please remember Puck’s entreaty to forgive us weak shadows; if you think you hate Shakespeare, we’re going to try to change, if not blow, your mind.”

“… riotously costumed (by Abra Berman) in fringe, flowers, feathers, beads, miniskirts and bell-bottoms….The cast and choreographer Cynthia Pepper have an infectiously great time matching musical jokes to the story….Powell’s Malvolio is tailor-made for ‘You’re So Vain’….Matthew and Elsman are particularly captivating in the confusion of their mutual attraction, and Thompson’s rock-goddess Olivia is a complete delight….‘Cherish,’ ‘Do You Believe in Magic’ and ‘I Got You, Babe’ may never have sounded better.” 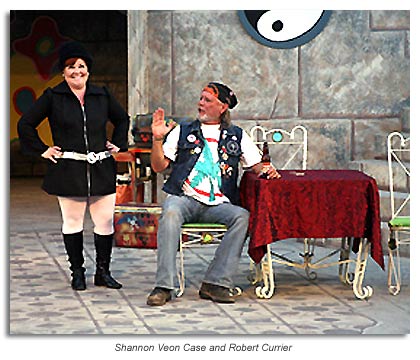 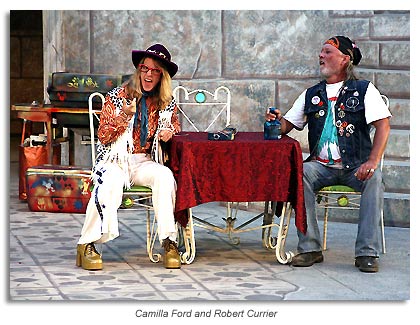 “Cynthia Pepper’s choreography is often delightful and the musical shtick is cute in general….Part of the fun of the repertory season is seeing several of the ‘Earnest’ actors in this show’s radically different setting – and in outrageously wayout period getups by Abra Berman….William Eisman’s Orsino is less lovelorn than a flamboyant bon vivant who even has his own girl-group backup dancers, and Cat Thompson makes a terrifically seductive, predatory Olivia. Alexandra Matthew is a forceful Viola, with some nice touches of nearly blowing her cover… 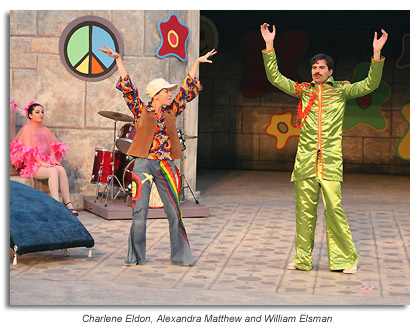 McClure plays the fool Feste as every comedian’s impression of Bob Dylan… Jack Powell is hilarious as dour, preening Malvolio, and Camilla Ford piles on the slapstick and a fine Funky Chicken as Sir Andrew Aguecheek.” 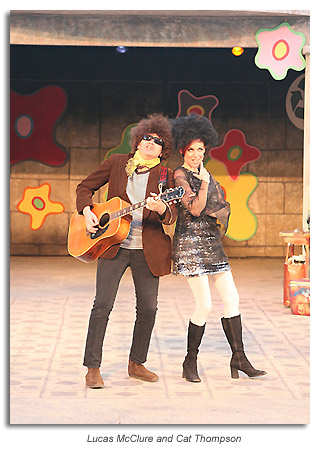 “Marin Shakespeare Company’s adaptation of Twelfth Night is one heck of a lot of fun….There’s also some standout Dylan, sung and strummed by Lucas McClure who is this play’s Feste…McClure and his guitar are show stealers….Robert [Currier] monopolizes on his character’s last name and brings Belch to life in the guise of Willie Nelson. The result is one vulgarly charming rough and stumble drunk who speaks from the gut….Abra Berman’s costume design is a colorful palate of hippie brilliance, from the lamentable Duke Orsino’s (William Elsman) array of silken Sergeant Pepper suits to the panache of the hot pink feathers pluming from the duke’s shiny back up singers, the Valentines…. 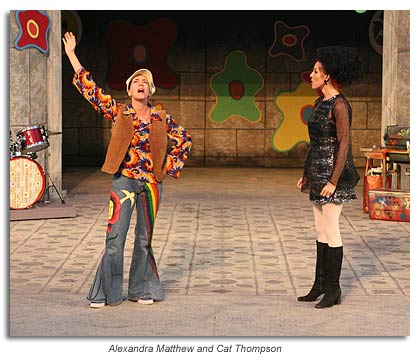 It’s so important for the role of Viola to strike just the right chord, incorporating comedy that deserves a laugh as well as wit, intellect, and charisma that leads both man and woman to fall in love with this woman dressed as a man. Alexandra Matthew strikes that chord…primarily with her ability to embrace and release Shakespeare’s language, to not overplay her role as a woman acting like a man, and finally with the look on her face as she prepares for her masculine role by stuffing a sock down her pants. 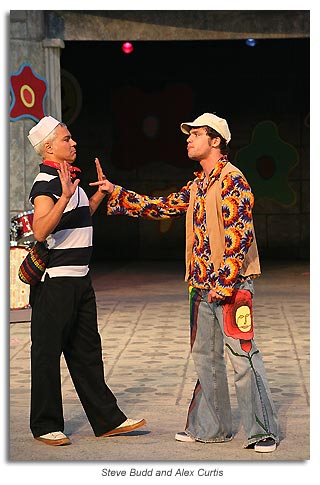 Cynthia Pepper does a great job choreographing a ridiculously silly golf club duel between Matthew (as Cesario) and Camilla Ford (Sir Andrew Aguecheek), with clubs whirling in the air and loony music to keep up the pace….Jack Powell as Malvolio also strikes a perfect chord in this production…. 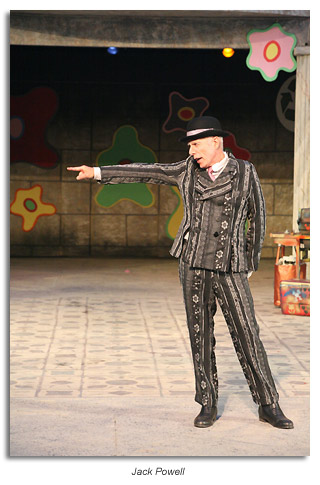 Powell plays Malvolio with all the melancholy and madness this character deserves….Comedy is in abundance throughout this production, from potty humor to wit akin to Shakespeare. Ford is hysterical as a revenge of the geeks Aguecheek, and does the best darn funky chicken seen on a Shakespearean stage. Interactions between Antonio (Steve Budd) and Sebastian are timed well enough to be a Saturday Night Live skit back when Saturday Night Live was good, and while Budd puts himself into casual flex-poses in hopes that his love interest will take notice, Lesley Currier’s direction picks up on every possible homoerotic pun and gives the actors full freedom to run with it….Terry Rucker majorly nails two minor roles as the Sea Captain complete with back up singer-sailors, and as a cross-eyed Sri Yogi who embraces the movement of hippieism to Zen Buddhism in the 1960’s and 70’s with the Wheel of Dharma in his hands. Rucker’s stereotypical Sea Captain seems reminiscent to Horatio McCallister from the episode of ‘The Simpsons’ conveniently called ‘The Sea Captain.’ ‘Yarr!’…. 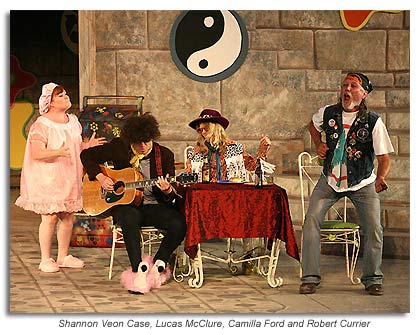 This production is festive, it doesn’t forget that Shakespeare wrote the play, and it celebrates the twenty years of fun both Lesley and Robert Currier have been having at the Marin Shakespeare Company. How can you not love a little Dylan under the stars, especially to the fine artistic tuning of Shakespeare?” 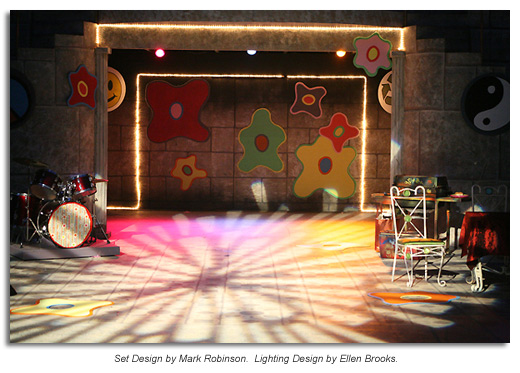 “This one’s a psychedelic stew of hot colors, hot babes, cross-dressers and funky costumes, all served up in Shakespearean sauce….The play’s remarkable costumes were the creations of Abra Berman, and Billie Cox arranged the sound. Psychedelic light effects… were assembled by Ellen Brooks.” 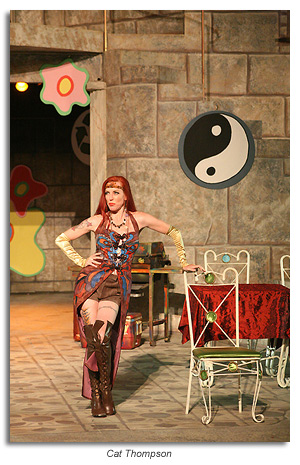 “I laughed out loud, sang songs to myself and my wife and had a wonderful time….The acting is enhanced by Mark Robinson’s scenic design….Matthew as Viola makes for a very cute and passably convincing boy, and costume designer Abra Berman has done a good job in emphasizing her resemblance to Curtis as an earnest and appealing Sebastian….Ford’s Andrew Aguecheek is pure comic genius particularly when he faints dead away when challenged to a fight. Powell endows Malvolio with an appropriate smugness, and the wonderful cast also includes a sprightly Shanon Veon Kase as Olivia’s maid, Maria; a larger than life Robert Currier as Sir Toby Belch; and a marvelous Lucas McClure as the clown, Feste….The finale is wonderful, some in the audience were singing along with the cast. Here, music really is the food of love, and this production should leave audiences fully sated.” 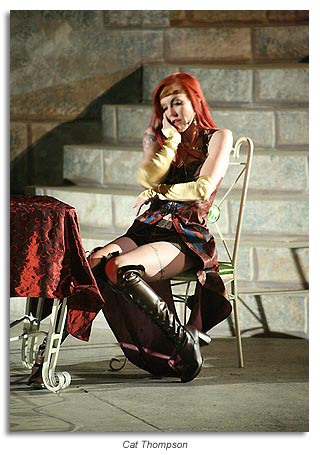 “This is an audience-friendly production for people you want to go to the theatre to just have a good time….William Elsman gives a stylish performance and has great vocal chops in his songs. Jack Powell is outstanding….Cat Thompson is the sexiest Lady Olivia I have ever seen. She reminds me of Cyd Charisse with those beautiful long legs of hers. 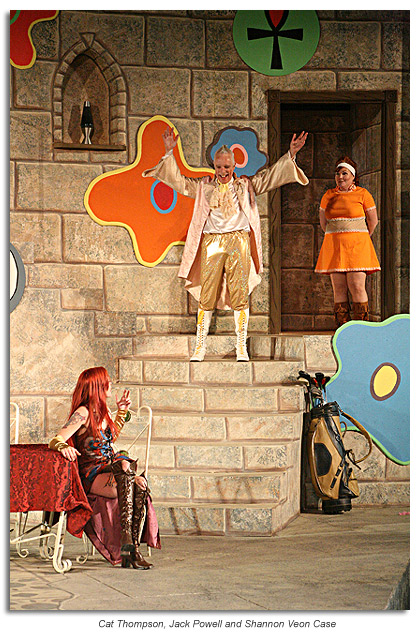 Alexandra Matthew gives an imaginative performance as Viola and she brings out the wit and meaning of the dialogue. Alex Curtis, a newcomer to the Marin Shakespeare Company, plays the twin brother with great vitality….Robert Currier… is precisely funny without being overbearing.…Sir Andrew Aguecheek played completely over the top by Camilla Ford…and Maria, charmingly performed by Shannon Veon Kase, who adds an earthy twinkle to the role….Lucas McClure gives a fine performance as Feste as he wanders about the stage singing Bob Dylan songs. Terry Rucker is funny as Sri Yogi Maharishi who looks like he came out of a Bollywood movie.”

“William Elsman is amusingly broad as Duke Orseno and Steve Budd is convincing and appealing as Antonio, the loyal sailor who befriends and helps Sebastian played with amazing dexterity by Alex Curtis….Feste (Lucas McClure)… sings many songs in an amazing impersonation of Bob Dylan! His performance is balanced against the play’s weightier character, the abused haughty servant (Jack Powell) remarkably performed by Jack Powell.” 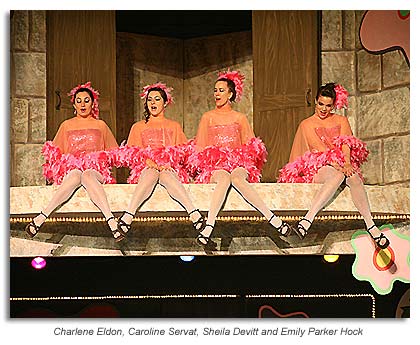