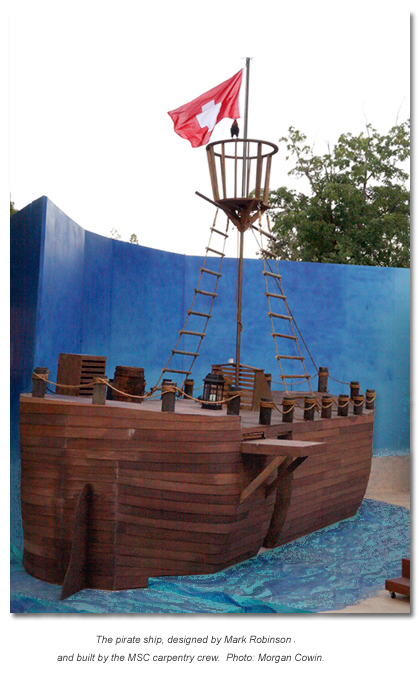 The thing about the summer of 2010 that I heard about the most prior to starting production was Set Designer Mark Robinson’s pirate ship. The carpenters couldn’t wait to build it. The actors were keen to play on it. The rope ladder was designed for our wonderful clown Nick Dickson to fall down without getting hurt. People ended up jumping off of it, climbing all over it, and — for all I know — sleeping inside of it on occasion.

We had a splendid time trying to figure out how to make it work (we thought we succeeded) for Tom Stoppard’s Travesties, which is set in land-locked Zurich. And of course, it was perfect doubling as a Roman galleon inAntony and Cleopatra. Kids wanted to climb on it, and everyone wanted to talk about it. We put it on our T-shirts and everyone in the cast wore pirate-inspired clothes at some point during the rehearsal process, or at least said a few more “args” than usual.

One of the things I loved about this production was how colorful, vibrant, and visually fun it was. When we invited our friends at San Pedro Elementary School — where we have provided a drama program for the past four years — to attend, the school organized a bus and 40 people, none of whom was a native English speaker, attended the play.

I was able to give them a short introduction in Spanish, and I loved watching them during the performance. They were engaged. They might not have followed every plot twist, but they loved the silliness, the theatricality, and the fun of the performance. I hope it made them want to see and participate in more live theatre.

The Taming of the Shrew permeated every education program. We saw versions performed by 5 year olds, by our Young Company students ages 8 – 12, by our teenagers. Each group brought their own style to the story. This was the second year we had run a Shakespearean comedy through the entire season, and we were very glad. It was a great, light, happy show that delighted actors and audience alike. 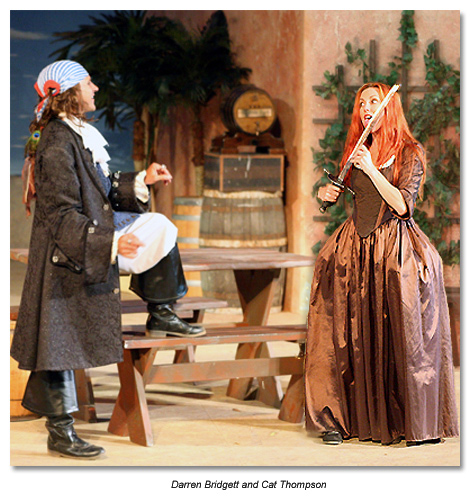 Since first directing our 1950’s BeBop Shrewback in 1997, I’ve come to love and appreciate even more deeply the strength, durability and brilliance of this great, commedia-inspired early comedy.

I’ve always been nuts for pirates. They embody the wild, free, adventurous spirit – not always with the highest morals, but ever battling the elements in search of buried treasures of all sorts. So why not make Petruchio a swashbuckler who has come to “wive it wealthily” on this isle: in search of cash and some extra fun on the side.

He finds his own buried treasure in the guise of Katharina, who gives him all the adventure he can handle, and turns out to be worth her weight in gold. 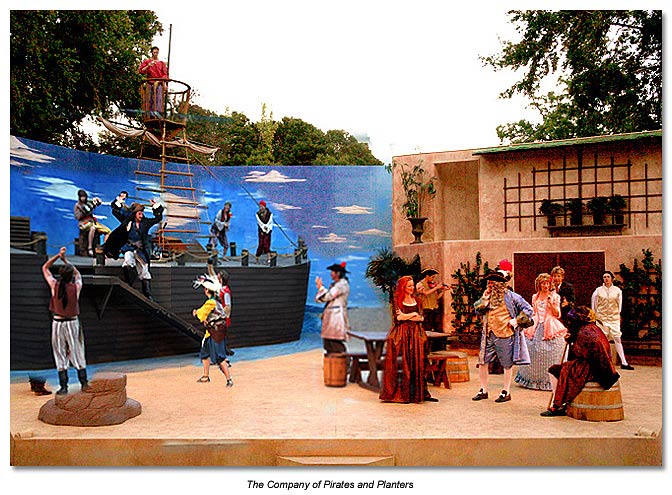 And how fortunate are we to have attracted and assembled such a dynamic core of fine actors who have worked wonders on the Forest Meadows stage over the past many seasons, winning us new audiences and accolades like two Bay Area Critics Circle nominations for “Best Ensemble” last summer. 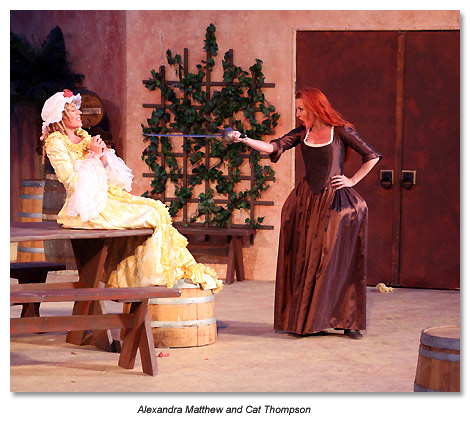 We hope you enjoy seeing our “star” actors back onstage; many of them are playing multiple roles this summer, allowing us all to appreciate their depth and range. We’re also always eager to welcome first-timers to Marin Shakespeare, some of whom we expect to become our stars of tomorrow. Theatrically, working with colleagues like this is about as good as it gets.

Shakespeare has given us a great Treasure Map – this delightful script. Set Designer Mark Robinson has given us an actual Pirate Ship to play on. So let’s all sail away! She’s a yare rig and we hope you enjoy the adventurous journey. 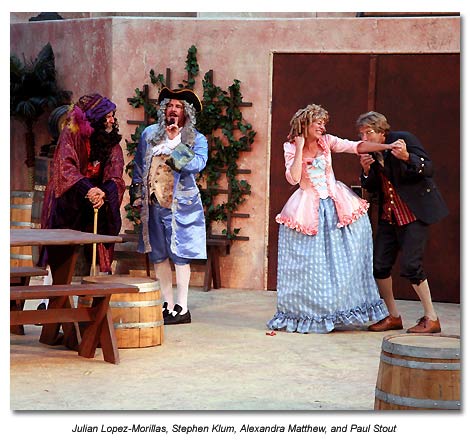 “Cat Thompson traces an engaging arc in the evolution of Katharina (Petruchio’s Kate) from sharp-tongued willfulness to oddly subservient but still feisty wife.

Thompson grounds Kate’s fury in the pain of an older sibling at the doting favoritism her father (a solid Stephen Klum) lavishes on her flirty-girlish and deceitful younger sister Bianca (Alexandra Matthew). 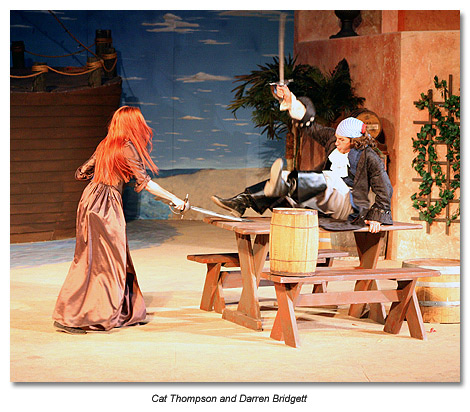 Her relish of physical combat pays off well in a swordplay wooing scene with Darren Bridgett’s Petruchio. And when she hits Kate’s big final speech, Thompson muses through “A woman mov’d is like a fountain troubled” as if she were just discovering an important truth about herself and her marriage…. 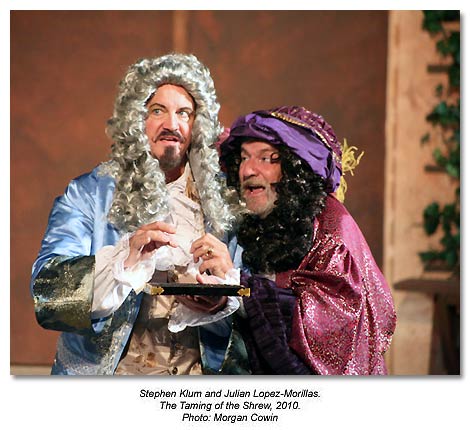 “Darren Bridgett’s Petruchio is modeled after Jack Sparrow from ‘Pirates of the Caribbean,’ staggering and slurring drunkenly (and mooching wine off the audience in Bridgett’s own running gag)….

The pirates certainly look the part, thanks to Abra Berman’s fanciful costumes…. 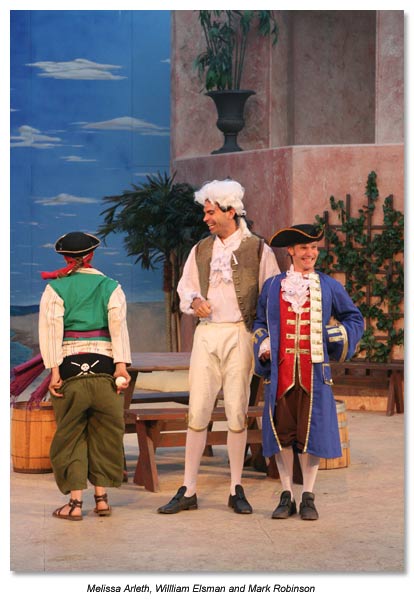 Alexandra Matthew’s Bianca is a giggling, flighty coquette, wooed by Lucentio (a foppish William Elsman) disguised as a tutor while his slick servant Tranio (Mark Robinson) negotiates with her father posing as Lucentio….

Stephen Klum is especially strong as the high-handed, patrician Baptista, and Julian Lopez-Morillas makes a funny old coot as the aged suitor Gremio. Lucas McClure has some great moments as Petruchio’s gruff servant Grumio, and Gary Grossman makes an amusing peg-legged Christopher Sly, with a new standup-style speech to introduce the pirate concept.”

“What can you do with a drunken sailor?” A lot, if you are Darren Bridgett, who has no limits. Bridgett’s Petruchio staggers through the audience, clambers onstage and, with bottle in hand, unsteadily woos the strong, feisty and attractive Kate (Cat Thompson). 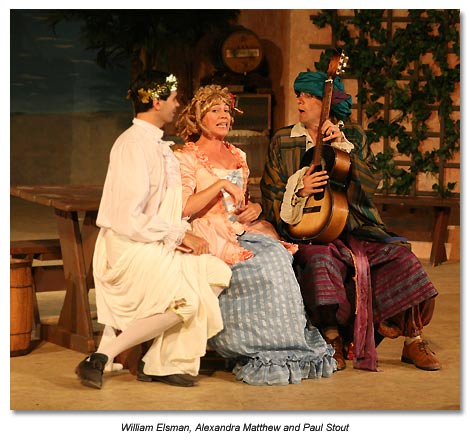 Shakespeare’s The Taming of the Shrew has been mauled before (the subject matter—how to tame a woman—lends itself to broad comedy), but usually the love/hate relationship between two strong characters can keep the story going. Not so in this slapstick farce. Kate and Petruchio are sideshows as the main dramatic question becomes whether Kate’s younger sister, the simpering Bianca (Alexandra Matthew), will be won by the handsome Lucentio (William Elsman) or the nerdy music tutor Hortensio (Paul Stout) or the dyspeptic old Gremio (Julian Lopez-Morillas). 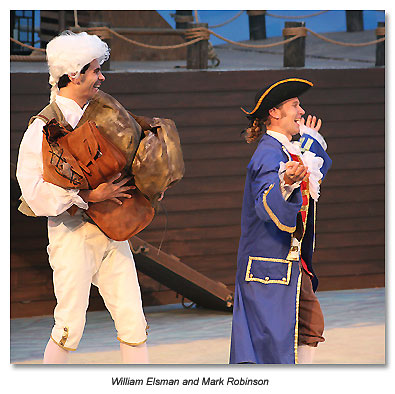 With Stephen Klum as Baptista, who is desperate to marry off his daughters, plus uppity servant Tranio (Mark Robinson), who impersonates his master, and a man-hungry widow (Camilla Ford), this able ensemble steals the show and keeps audiences involved.”

If you don’t recognize those lines from the text of William Shakespeare’s Taming of the Shrew, it’s because he never wrote them. Still, there they are, alongside a whole notebook full of added-on lines, quips, quotes, comic expositions and alternate terminology that stick out all over in Marin Shakespeare Company’s rollicking new piratethemed adaptation of Shrew….

It’s loads of fun, and the audience at last Sunday’s evening performance ate up every bit of nautical nonsense. The key performers are a hoot, especially Darren Bridgett as a comically violent, Jack Sparrow–ish Petruchio and Cat Thompson as Kate. Gary Grossman, delivering a piratical prologue that springs entirely from the pen of Robert Currier, is an absolute stitch, as is Mark Robinson as Tranio, a calculating goofball of a servant.” 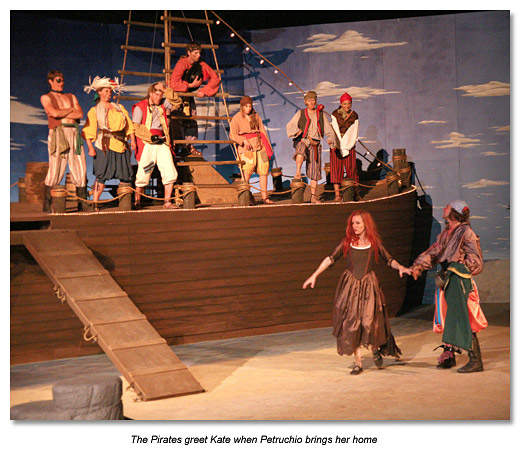 “Marin Shakespeare Company again brings innovation to one of the classic comedies by The Bard of Avon with their production of The Taming of the Shrew. The works of the Elizabethan-era poet have, over the centuries, been recast in many different styles, but probably not ever before in a West Indies pirate setting…. 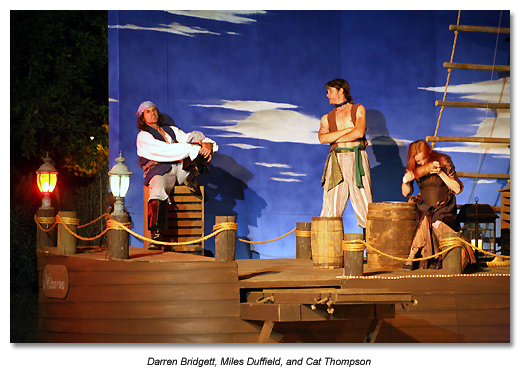 The production is readily accessible family entertainment with refreshing local and topical references….this lively production is full of humor, both physical and verbal, that remains true to the original. Though many new lines have been added, the sense of Shakespeare’s characters is all there, with some brilliant casting decisions and dedicated acting.”

“Feminists and their disciples often rightfully consider Shakespeare’s Taming of the Shrew objectionable, especially Kate’s (Cat Thompson) final lecture to the recently married Bianca (Alexandra Matthews) and A Widow (Camilla Ford) advising subservience to their husbands. But if there is anyone who can get away with being humorously non-offensive to a social injustice, it is Robert Currier who took didactic Tom Stoppard by the tail, twirling him around and guiding Marin Shakespeare’s Company to a winning romp ofTravesties. 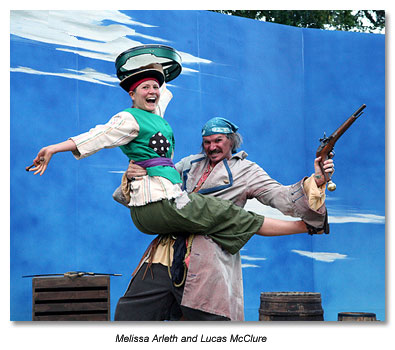 For this their second show of the three play season, director Currier has molded his ensemble cast into a combination of vaudevillians (there is enough shtick for a dozen shows) and circus performers in the guise of pirates and their prey.

He is ably abetted by a cast attuned to his physical style of direction, costumes to die for by Abra Berman, hysterical sound design by Roger Clay and energetic fight direction by Brian Herndon. 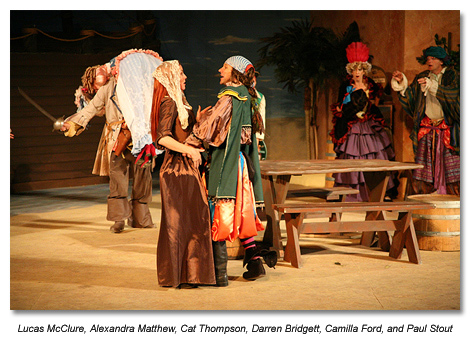 If you wondered what the sailing ship was doing on the set of Travesties, you need not wonder further. He has set the locale in the Caribbean bringing Petruchio (Darren Bridgett) with his two servants Grumio (Lucas McClure) and Curtis (Nick Dickson) to the mythical Island of CoCo on the pirate galleon….Be warned that their shenanigans will split your sides if you survive the non-stop action/laughter.

The original opening introduction to Shrew is rarely performed but Currier has cleverly written a monologue for Christopher Sly (Gary Grossman) to set the scene. You won’t find a grubbier Sly and Grossman is a marvel with pirate jargon as he hobbles about on a wooden leg…. 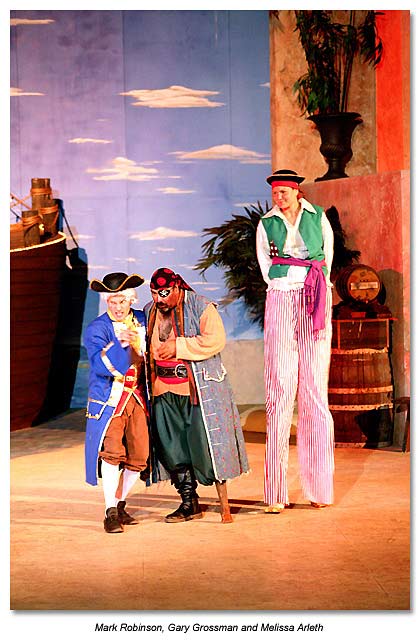 There is no doubt that Darren Bridgett was born to play Petruchio. He struts his stuff upon the stage first in drunken disorder and later with demonic authority. Currier encourages broad acting styles, the cast responds with gusto. Darren Bridgett leads the way keeping in character throughout most of the play. Audience favorite is gorgeous redheaded Cat Thompson as Kate who displays dignity and control as a shrew even in her verbal battles with Petruchio that morph into fight scenes with scabbards. Her final speech exhorting her fellow wives to obey their husbands is a gem.

All the motley crew and other major actors deserve accolades but special mention must be made of Melissa Arleth who is a one-person circus riding a unicycle, adeptly walking on stilts and demonstrating perfect control of a hula-hoop.”

— Kedar Adour, For All Events

“Marin Shakespeare Company is presenting a wacky production of Shakespeare’s most popular comedy The Taming of the Shrew….Darren Bridgett is the damnedest pirate captain I have ever seen, and he is a scream as Petruchio. It looks like as if he has been at the gin bottle too much, and that is what makes this performance hilarious. 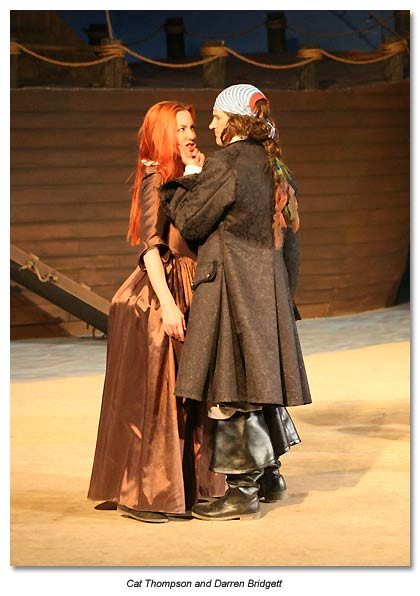 Cat Thompson is splendid as Katharina. She plays the role bold but not as bitchy as other actresses who have taken the part. She is very good with a sword too.

William Elsman gives an engaging performance as Lucentio, almost on the fey side. Mark Robinson pulls out all stops in hilarity playing his servant Tranio. He sports what could be a French-Spanish-Italian accent, if that is possible. Julian Lopez-Morillas steals scenes with wheezy intonations as the old man Gremio….The supporting cast doesn’t disappoint either, with every member well suited to his or her part. Giving extravagant performances are Stephen Klum, Alexandra Matthews, Paul Stout, Camilla Ford, Lucas McClure, Melissa Arleth and Nick Dickson. There is music, dancing, and all sorts of fun goings-on on the stage during the two-hour and 30 minute, fast-paced production…. 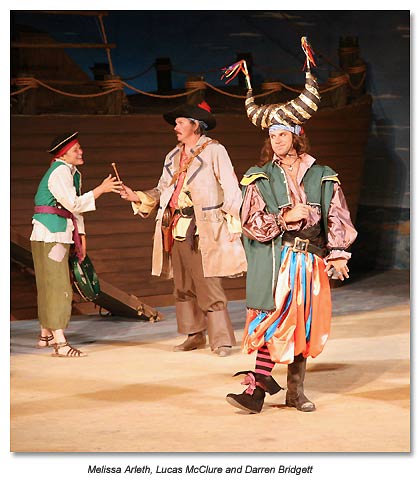 Abra Berman does a splendid job with outlandish costumes for both the gentry and the pirates. They are the hit of the show. Darren Bridgett wears the craziest wedding outfit I have seen in years. Choreography by Cynthia Pepper is audacious and fun. The set by Mark Robinson is excellent, with a large pirate ship on the extreme left side of the stage where much of the action occurs in the second act.”