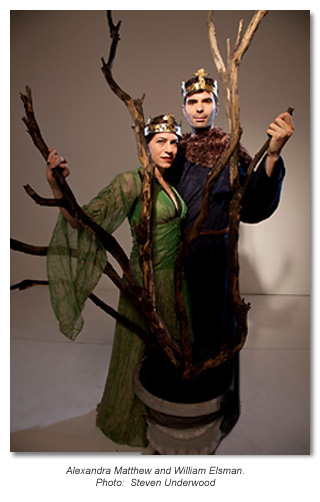 We chose this play for the opportunity it allowed for real-life husband and wife team Alexandra Matthew and Bill Elsman to play the bloody couple. Bob and I have played these roles opposite each other in two productions, and we knew how much fun – and what a great challenge – it would be for a real-life couple.

Bill and Alex aren’t just any couple. They met at Marin Shakespeare, each is an audience favorite having played numerous lead roles at Forest Meadows, and each is a fabulous Shakespearean actor. As it turned out, a third Elsman also participated in the production when Alex became pregnant shortly before going into rehearsals.

Now, this is perhaps not the very best show to do when pregnant. There are so many images of dead babies, so much madness, and so much gore. We’re hoping Logan didn’t have too many in utero nightmares!

The production explored the multitudinous teeming madness in Macbeth’s brain. The three witches were imagined as household servants who take on sinister qualities only in Macbeth’s mind. A growing number of apparitions appeared throughout the play, augmenting Banquo’s ghost, bubbling up from the cauldron as the line of kings, and ultimately helping lead to Macbeth’s downfall in the final duel.

The costumes and set had an eerie fairy tale quality. The set pieces consisted of slabs of wood, tree stumps and twigs that began in a chaotic jumble, came together to create the banquet scene, and broke apart again as Macbeth’s world disintegrated. Revolving and trap doors gave the world a permeability, blurring the lines between sanity and madness, reality and phantoms of the mind. 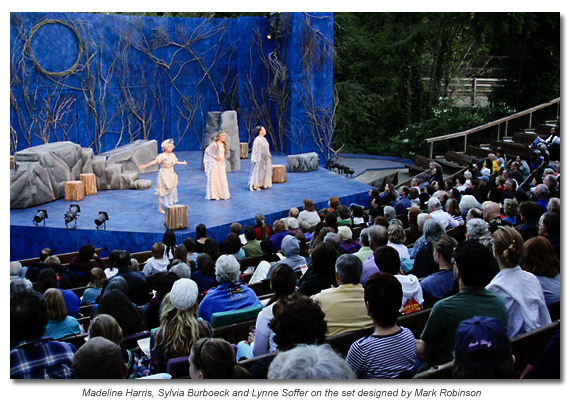 One of the mysteries in this play is the question of the “missing” Macbeth child. Lady Macbeth says she has “given suck” but Banquo confirms that Macbeth “has no children”. Having never seen it staged, we decided to give the Macbeths an infant at the start of the play, who we understand dies shortly after the murder of Duncan. It was an interesting solution with a certain merit. In other lovely touches, we saw Banquo dreaming about Fleance becoming king, a second murderer who broke down under the stress of killing a pregnant Lady MacDuff and Child, and many instances of Dunsinane filled with spying and paranoia. It was bloody fun! 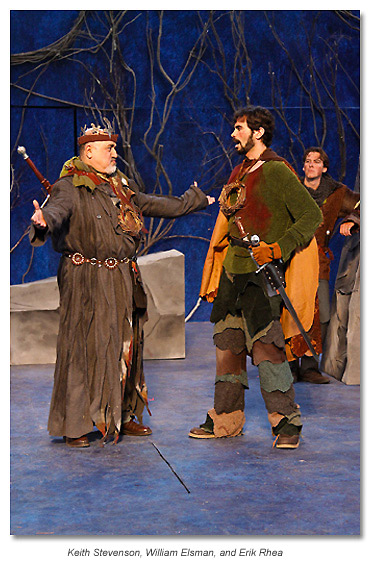 We first produced this play in 1991. At that time, our son Jackson was two and a half. We didn’t have many child care options, and he spent a lot of time at the theatre.
After a couple months of rehearsals and performances, I remember being surprised to hear my two-year-old explaining the plot of the play to someone. He said it was a story about a man who kills the king, becomes king himself, starts killing everyone, and goes crazy because he feels so bad about what he’s done.

I realized then that this play is very much a fairy tale. The story has the mystical, medieval feel of a Tarot Deck, with swords, cups, coins and wands, and iconic figures like kings, witches, murderers and healers. It is both simple enough for a two-year old to understand, yet deep enough for us to continue to find new insights after more than 400 years. 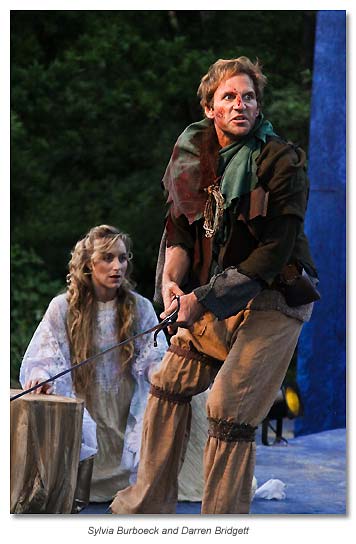 There are so many things to explore in this play. Part of its magic is the way it interweaves imagery: listen for references to babies (the future), hands (our present actions), blood (once spilled, life is past). And then there is the glorious, pounding rhythm of the language; the music of the words alone are enough to weave a magic spell, as the sounds of horses’ hooves – another recurring image – mark time ticking by. 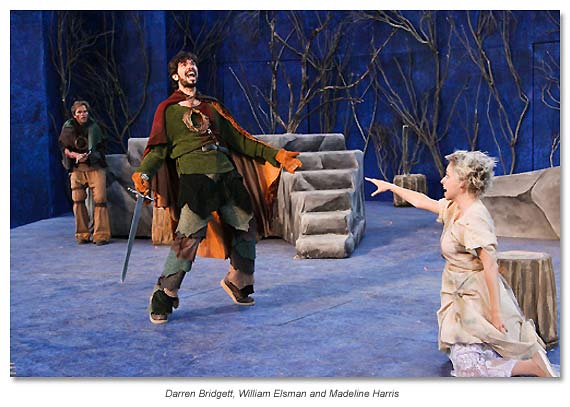 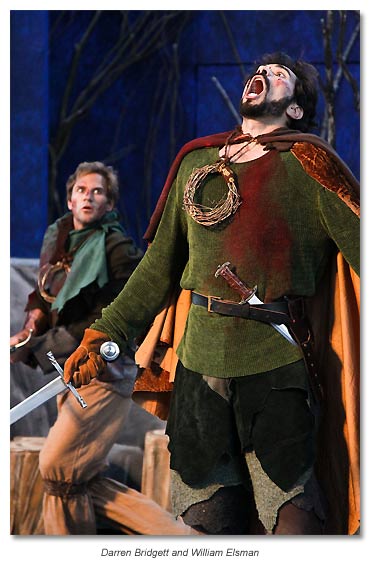 Macbeth is also a play of opposites that are somehow one: fair is foul and foul is fair, battles are both lost and won, false face must hide what the false heart does know. All of the imagery, rhythm and antitheses relentlessly remind us that we, like the characters in this play, are both individuals and archetypes. We live our lives like actors in a fairy tale, where forces greater than ourselves exert an inexorable pull, even as we believe we are exercising our free will. Things are not always what they seem, and everything has a double nature. In this play, trees turn into men and men into trees. Women appear and disappear like bubbles. Friends may be enemies, and seeming enemies may be friends. Words equivocate, and deeds must arbitrate. This is a murky world, thick with paranoia. It is enough to drive anyone mad. 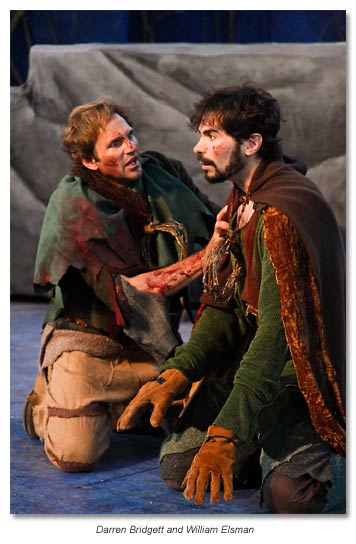 As you’ll see, we are exploring the madness in this production. There are so many unanswerable questions about reality and insanity. Is Macbeth mad to see metaphysical spirits, or daggers in the air? Are these characters driven insane by guilt and remorse, or are they crazy to begin with? What is madness? We’ve made some choices that shed a certain light on this ancient story, and bring to life the multitudinous scorpions of Macbeth’s mind. It’s one way to imagine this story; there are always doubly redoubled alternatives to explore.

Shakespeare’s great play touches a deep chord within us, making us examine what we might be capable of doing to attain power, as we empathize with and recoil from these gloriously articulate, highly imaginative characters. 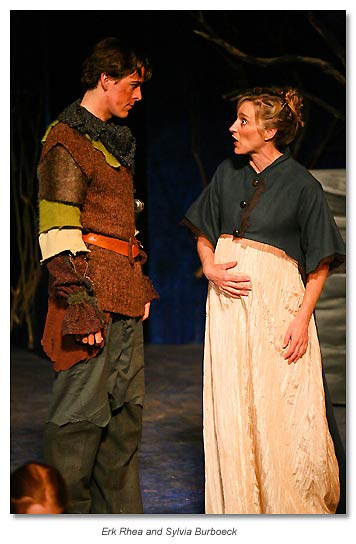 ” ‘Macbeth’ is an auspicious start to Marin Shakespeare’ new season…excellent acting and inventive staging…director Lesley Currier fortifies with apparitions to surround much of the action….

Rather than confining the action to a specific time or place, there seems to be an emphasis on the ‘tone’ of the play with the action often occurring in a dream-like state morphing into nightmares compounding the horror of gruesome murders that abound. Not only is Macbeth a historical play, it is clinical study of descent into madness that director Currier fortifies with apparitions to surround much of the action….

Marin Shakespeare’s cast for this staging is definitely up to the challenge. The tall imposing Elsman plays Macbeth as a despicable powerful Machiavellian egomaniac. He controls the stage with dynamism revealing believable inner turmoil handling Shakespeare’s dialog with authority. Elsman…gives the words brilliant meaning….

Scott Coopwood as Macduff and Daniel Petzold as Malcolm are absolutely brilliant in their confrontation in the second act. Artistic director Robert Currier has the plum role of the Porter with his ‘Knock, knock..’ speech that he partially ad libs bringing laughter to the appreciative audience….

Now about the witches (the weird sisters) ably performed by Sylvia Burboeck, Madeline Harris and Lynn Soffer, you will never see a more “alive” bubbling caldron that is sheer genius on the part of director Lesley Currier. Special accolades go to fight director John Ficarra who has choreographed some of the best fight scenes you may see.”
– Kedar K. Adour, MD, For All Events / www.theatreworldinternetmagazine.com 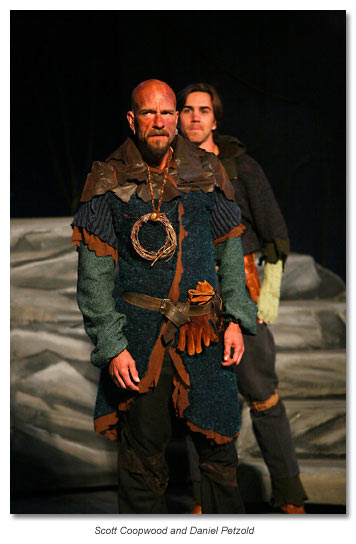 “For our money, Marin Shakespeare’s William Elsman is the craziest Macbeth yet. Under Lesley Schisgall Currier’s direction, Elsman infuses Macbeth with great power and presence….

Darren Bridgett’s Banquo is loyal and solid, Alexandra Matthew’s Lady Macbeth is evil incarnate and Scott Coopwood’s Macduff makes us all think that he’s… the guy we would follow into battle….

It’s hard to beat listening to fine actors performing classic Shakespeare, while sitting outside in a small, wooded amphitheatre.” 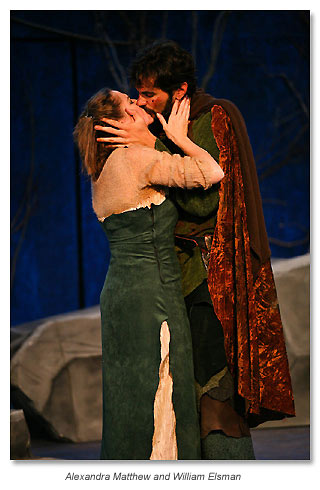 “Leslie [sic] Schisgall Currier …successfully mounted this masterpiece of ambition, power, deception and treachery. Opening night’s performance was under a full moon. There was also a little wind blowing across the Forest Meadows Amphitheater and no significant chill. All of the rage and storm to be had was on stage in this bloody tale of corruption, and ruthless search for power….

Three cackling hags who appear in the first scene set the tone for the night. Lynne Soffer, Sylvia Burboeck and Madeline Harris were superb as the three witches. These women, who also play other characters, were suitably costumed by Abra Berman to change at a moment’s notice….

William Elsman gives a wonderful nuanced performance as Macbeth whether the triumphant young general or the mad King haunted by the blood on his hands. Alexandra Matthew, previously cast as the nice girl on stage, was a welcome surprise as Lady Macbeth. Macbeth and his wife are spiritually in tune; they love and understand each other without speaking everything out. The supporting cast is uniformly strong. Particularly strong is Scott Coopwood as Macduff, the man who eventually fells the play’s title character in a final battle. Robert Currier does a clever bit as a sleepy Porter as comic relief to slack off the emotional tension between two strong scenes and drew much laughter from the audience. Darren Bridgett makes a brave and noble Banquo…. 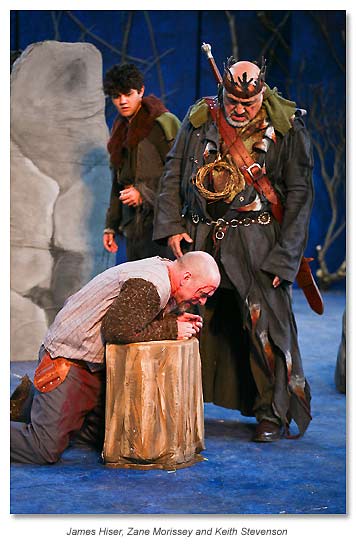 Macbeth is a thriller from start to finish, fortified by Elsman’s robust Macbeth, Scott Coopwood’s dashing Macduff and a closing image that suggests how cycles of political violence churn on.”

–Flora Lynn Issacson, For All Events 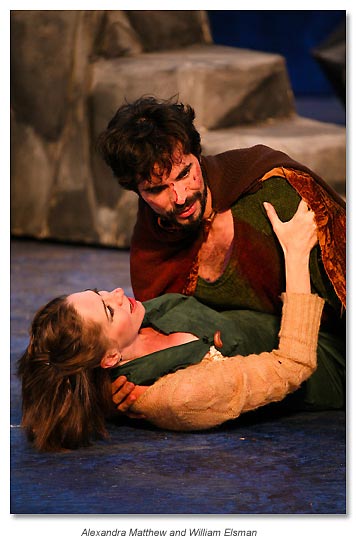 “The intrusion of the spirit world is emphasized in the Marin Shakes version helmed by managing director Lesley Schisgall Currier….

Currier’s staging of the witch scenes is striking: Three women of the Macbeth household staff (Lynne Soffer, Sylvia Burboeck and Madeline Harris) gasp and convulse as they become possessed by the Weird Sisters. When Macbeth first encounters them, the spirits also take hold of him so that he speaks their prophecies along with them in a croaking intake of breath.

The Macbeths are played by real-life spouses and frequent Marin Shakes costars William Elsman and Alexandra Matthew. Elsman is a hearty Macbeth who gives a good sense of his deteriorating sanity and does a terrific job with the soliloquies, and Matthew makes an enthusiastic and eloquent
Lady Macbeth….

Keith Stevenson is a rich-voiced King Duncan, and Daniel Petzold is zesty… as his heir Malcolm. Scott Coopwood is strong and no-nonsense as the avenging Macduff. Artistic director Robert Currier (the director’s husband) shows up for one scene to do a charming rendition of the drunken porter’s usually problematic comedic speech, with a few modern ad libs.

Abra Berman has dressed the soldiers like Robin Hood’s Merry Men, in jagged patches of green and brown draped over each other. Sound designer Billie Cox adorns the action with thunderclaps and screeching birds and contributes an ominous choral song of “fair is foul and foul is fair” to open the show.

Mark Robinson’s fanciful scenery sets the story outdoors, with bare tree branches crawling up the deep blue walls and large gray stones all around. The…ways Currier gets kids and teens involved in the production are…effective: Angelica Zuber, Lucas Rudy and Zane Morrissey are charming in the speaking parts of various characters’ children, and others embody soothsaying spirits summoned by the witches.

Most of the major speeches are delivered deftly, There are a number of striking moments in the show’s 2 1/2 a hours upon the stage.”