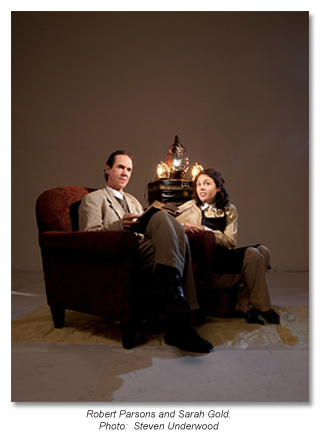 Jon Tracy is one of the most creative young directors in the Bay Area, as he has proved over and over with his reimagined classic stagings and original theatre pieces. Over the past four years, we have had the great benefit of Jon’s direction for many of our teen Shakespeare productions (and Jon has gotten to try out some of his wacky ideas). When we asked Jon to direct on the mainstage for the first time, we were curiously eager to see what he would come up.

Jon’s take on The Tempest was dark, stark, and brutally contemporary. Jon eschewed traditional magic and instead created a steam-punk world in which Prospero and Caliban were dueling scientists and Ariel was electricity itself. Inspired by Nicolas Tesla, Prospero’s Ariel Coil worked its “magic” through six plug-in entities played by six amazing young actors. With rearranged lines and a streamlined text, Jon created a world powered by machinery in which human emotions sometimes were trampled, but where love and forgiveness were possible. Jon’s dark vision included some rays of sunshine. 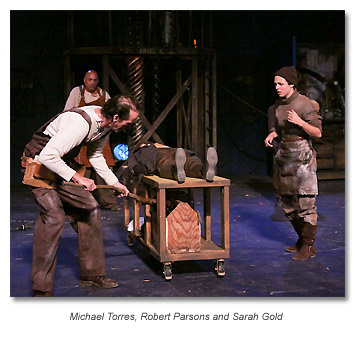 It was in no way a traditional Tempest, and it wasn’t anything that we would have done on our own. But that’s why we hired Jon.

It was an ambitious and visually striking production. (Apologies to those who showed up for our first preview only to see a Technical Rehearsal instead – we had more kinks than usual to work out.) The perfectly rendered Abra Berman costumes, Nina’s clever set design details, and the precision physical theatre of the entire cast made for a memorable and completely unique production. Oh, brave new world! 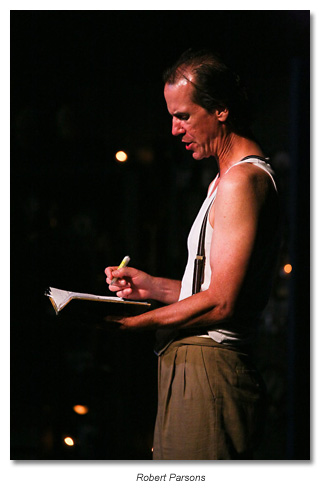 I hate wizards.
Specifically, I hate one type of wizard; those guys with the big beards and the purple gown and hat with the silver moons and stars embroidered on them. Oh, and these wizards always have a magic wizard staff. Dumb.

No, not dumb. Boring. Really boring. Why? Because they always win. Why else? Because they know they will always win. They are wizards and you aren’t. Really, the battle is over before it ever began. We’re left with a bunch of fun magic spells to bide our time but really, that dude in purple is going to be just fine.

You protest. “What about Gandalf?” you say. “When I used to play Dungeons and Dragons my wizard character was totally killed by the Rancor Monster!” I reply in these ways: first, Gandalf didn’t do so bad for himself, second, the Rancor Monster was in Star Wars but I get what you’re saying and third, I’m obviously not talking about those wizards. I am instead really talking about one wizard. His name is Prospero. 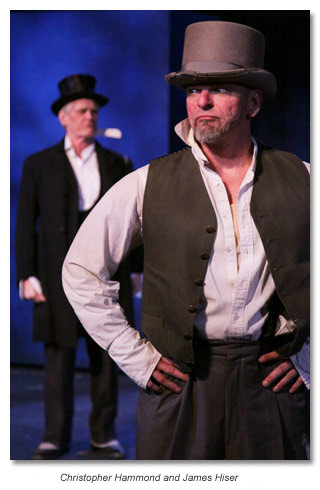 “But –“ you continue to argue. I cut you off with this addition; “It’s my Director’s Notes, not yours… back off.”

Every time I see The Tempest and meet Prospero I check out. Prospero’s got a plan and really nothing stands in his way. Sure he grapples with all sorts of fears and guilt (and hey that’s great) but he never has to worry whether or not his revenge will work… because, say it with me… he’s a wizard. Dumb. 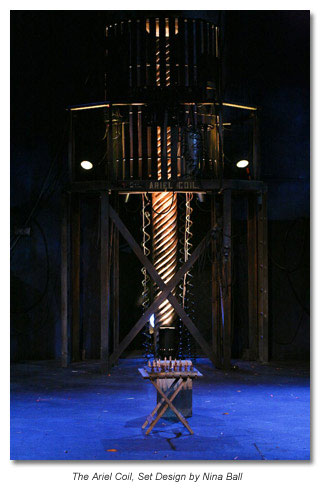 So I thought I’d change things up a bit. What if we stripped Mr. P of his magic and replaced it with science? What if our Prospero had the same mission but actually had no idea if his plans would work? All of this led to a lot of research.

Out sprang the stories of Tesla and da Vinci. Scientist, Illusionist, Inventor: this was the story I wanted to tell. From this idea, Prospero’s relationships to other character shifted and whole new perspectives began to emerge. The product of which is very much The Tempest you know, except that you won’t believe what happens next. 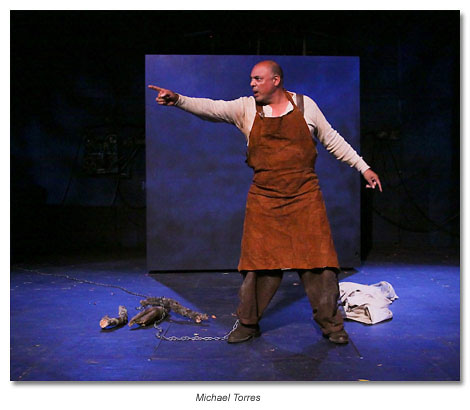 “Director Jon Tracy has earned a well-deserved reputation for his bold adaptations of classics ranging from ‘Animal Farm’ to Homer’s ‘Iliad’ and ‘Odyssey.’ This time, in his debut outing with Marin Shakespeare Company, Tracy’s taken on “The Tempest.”
.…The matchup is thoroughly inventive, often engrossing and at times highly entertaining….
The deposed and exiled Duke Prospero (Robert Parsons) is a scientist – not mad but edgy and a little unhinged – in the electrical wizardry mold. 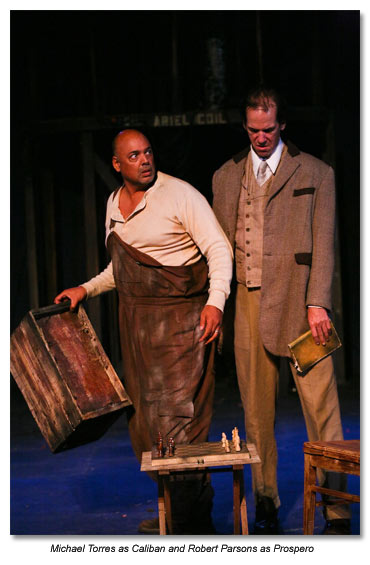 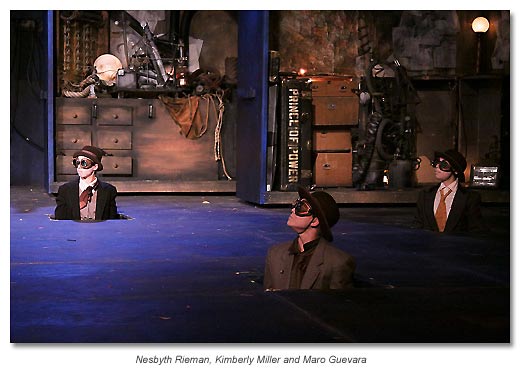 The Coil controls the Qualities, six deft, top-hatted and goggle-eyed functionaries popping out of trapdoors to contribute humorous stage magic with their robotic movements. But Tracy’s biggest change – besides drastically cutting, rearranging and redistributing the text – is turning Caliban from a semi-human denizen of the island to an ‘indigenous scientist.’ Michael Torres’ forceful, keen-eyed Caliban is just what Tracy wants for a worthy opponent for Prospero.
[T]he effort is intriguing in many ways, and some moments come alive with engaging originality….This is a remarkably prosaic ‘Tempest.’” 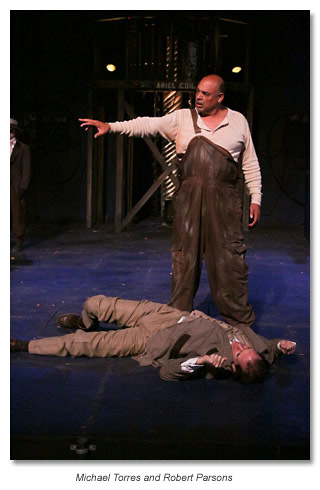 “Director Jon Tracy has delightfully set The Tempest in a steampunk inspired Victorian land of imagination. Prospero’s cell does not evoke ceremonial magic ala Dr. Faustus but rather the laboratory of mad Dr. Frankenstein. The magic here is the magic of electricity and science, not demons. But the magic, happily, is intact and the vision is successfully realized.
Robert Parsons’ Prospero is not a powerful magician, but a frightened, angry, socially inept science nerd more at ease with his mechanical devices than he is with any human being. His Ariel is not evoked by prayerful gestures or chants, but is plugged in to some sort of electrical device and moves mechanically. Perhaps I should say Ariels (plural) as Ariel here is manifested as several mechanical seeming creatures who speak simultaneously in hauntingly effective fashion. This is all very difficult to describe but a pleasure to see and hear.
.…for the joy of this visually thrilling production, one is happily willing to suspend disbelief. Mr. Torres’ Caliban is full of confused poetry, passion and ambition, as he should be. 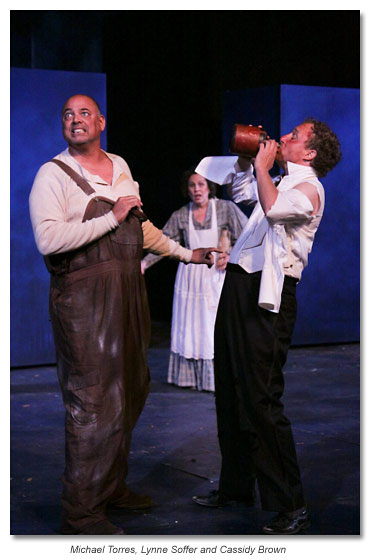 Prospero and Caliban are (rightly) the centerpiece of the production, along with the extraordinary Ariel performed as an ensemble by Silvia Girardi, Maro Guevara, Kimberly Miller, Nesbyth Rieman, Erika Salazar and Jeremy Vik. They are all excellent.
The supporting cast does a fine job of moving the story along and keeping things clear.
As a treat for the senses, this production is a marvelous success….
On its visually thrilling terms, the production is a hands-down winner and I recommend that you attend.”

“One of the most exciting things in the theater world is when a director makes the bold attempt of radically changing a well established and loved play. When the performance actually lives up to the hype and expectations, it is a glorious and magical event that can totally alter your perception of what theater can accomplish. The Tempest, currently in production by the Marin Shakespeare Company, has accomplished the aforementioned feat, in a marvelous display of the Steampunk genre.

For those not familiar with the concept of Steampunk, it is a sub-genre of Sci-Fi/Fantasy and Historical Fiction that imagines a time (usually set around the Victorian or post-American Civil War era), where steam power reigns, and Nicola Tesla’s imagination for electricity was able to take it’s course. If you are familiar with the works of H.G. Wells or Jules Verne, you have already had a starter course in Steampunk, though the term was not invented until the 1980’s. 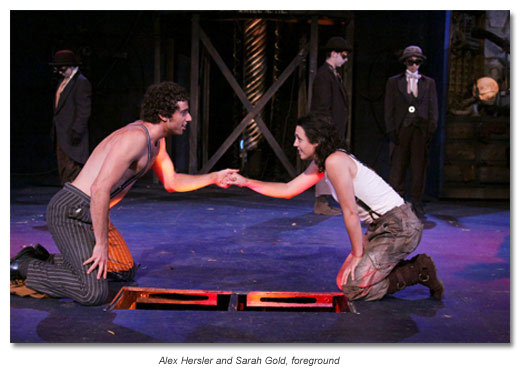 in this production of The Tempest, director Jon Tracy replaces the magic and mysticism of the Bard’s original setting…with Proto- and Fringe-science that would make Tesla and Victor Frankenstein proud. The sets are a wonder to behold, and the costumes are the linchpin that really hold the visual them of the production together. The slightly tattered and worn in costumes pull together the idea that this is not your parents’ The Tempest. 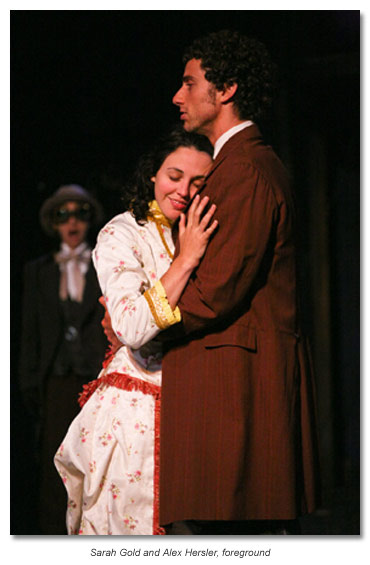 Every actor in this production was great. From the optimistic youthfulness of Sarah Gold’s Miranda, to the paternal love and caring of Robert Currier’s Alonso, it is plain to see that each actor put a lot of time into honing their characters and giving them something to work off of. 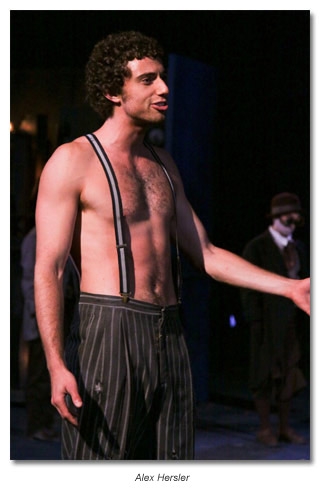 Special recognition should go to Michael Torres for delivering an incredibly nuanced version of Caliban, which went beyond the tired savage/monster that has been done many times before. Cassidy Brown also did an outstanding job as Stephano, and was easily the highlight of the comedic side of the production.

With a brilliant concepts, gorgeous visuals and a stellar cast, The Tempest is definitely going to be a contender for best Shakespeare of the year. Grab whomever you can and show them how magical and compelling Shakespeare can still be.”

– Paul Webb, For All Events 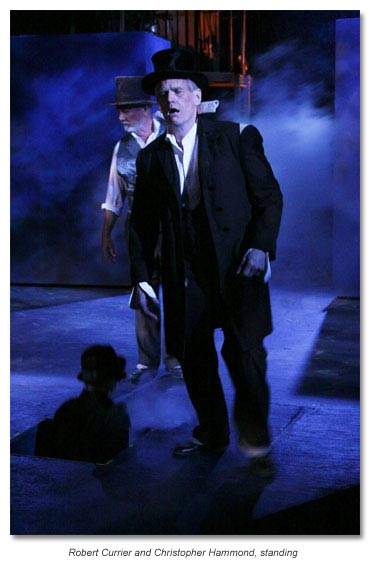