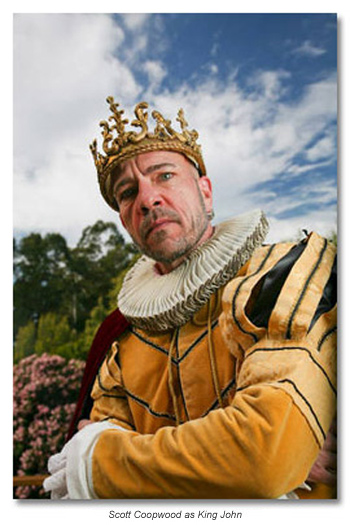 There’s a saying among Shakespeare theatres that if you really don’t want to sell tickets to a play, do KING JOHN. Easily one of the least produced of Shakespeare’s plays, a minor history, with a main character who is a bit of a cypher, there is a good reason we had never produced this play in our first 23 years of work.

Inspired by reading a historical novel set in the era of King John, I remembered that Shakespeare had written a play about the guy we typically think of as the mustache-twirling villain from Robin Hood. Of course, I hadn’t read the play in decades, and although I’d seen my first production a few years earlier at the Oregon Shakespeare Festival, it did not leave me eager to ever direct or produce the play. And then something magical happened.

As I re-read the play, I started to see it come to life in my mind’s eye. I was charmed by the humor of the Bastard learning from his mother how she had succumbed to the irresistible advances of King Richard. I was excited by the raw bluntness and intelligence of this character I was imagining as fearlessly charismatic and quintessentially Plantagenet. 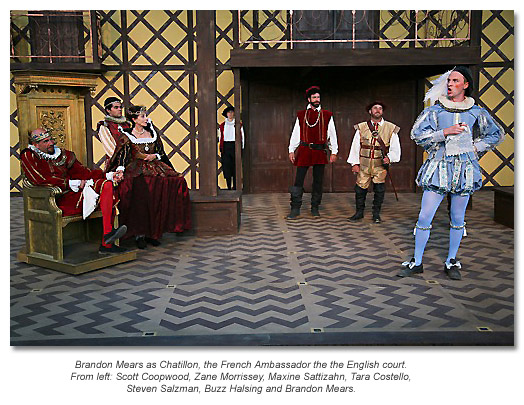 And then the other characters began to speak to me. I firmly believe Shakespeare intended the foreigners to be comic — the French, Austrian and Italians who serve as foils to set off the trueness of the English character. Theatre critics who called the production “unnecessarily” comedic were outnumbered by those who were delighted that the show was actually entertaining. I saw how “King John” would have played to an Elizabethan audience, newly separated from Rome and finding its own national identity. 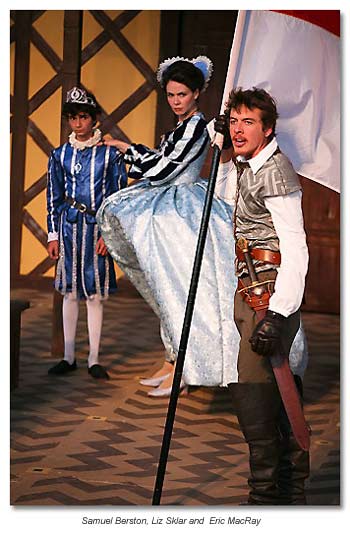 I think this production discovered something new about “King John” that has been lost for a few centuries — that this is popular theatre. I felt we had a breakthrough, and learned how this play can actually entertain an audience.

Thank you to the large cast who went on this journey of discovery. Of the 24 Shakespearean actors in the cast, only one had ever been in “King John” before — Barry Kraft, who had actually acted in it twice! — and only one had ever seen a production, not including Barry. Several audience members told us this production completed their Shakespeare-viewing canon. Forage!

The story of King John has been exceptionally popular on stage. In Shakespeare’s day a play entitled The Troublesome Reign of King John was reprinted in quarto three times, first in 1591 and later with attribution to William Shakespeare as the author; about half the scholars now believe the script printed in the First Folio was Shakespeare’s updated version of his own earlier work. There were many 18th and 19th Century stagings, and Herbert Beerbohm Tree’s 1895 silent version of the death scene from King John is not only the earliest Shakespeare ever captured on film but also the oldest extant film clip.

Yet today, the play is rarely produced. I’ve never wanted to direct it, even after the one time I saw it staged. And then… I read it again. And I fell in love. 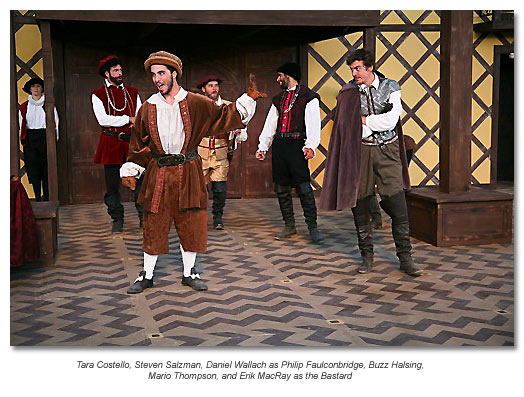 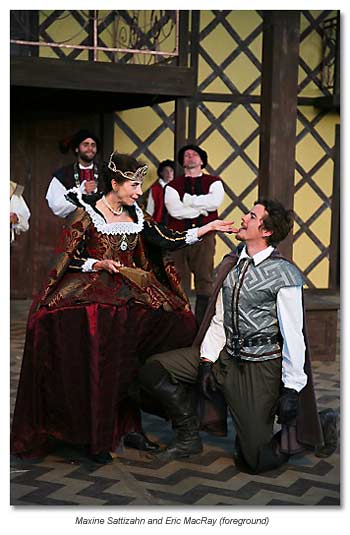 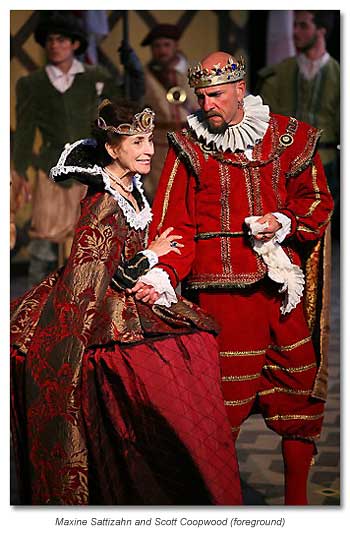 We’re also trying to enkindle the glorious feeling of English patriotism by reigniting Elizabethan disdain for foreigners. Henry Vcreates an English nationalism by forging Welsh, Scots, and others from all parts of the British Isles into a “band of brothers”. King John shows us Englishmen who, for all their faults, are less deceitful, haughty, manipulative, coarse, and unethical than the play’s arrogant French, brutish Austrian, and hypocritical Italian. Both make us proud to be English. (We’re all honorary Englishfolk for the next few hours). Shakespeare twists historical facts to give us a play that stirs national pride. 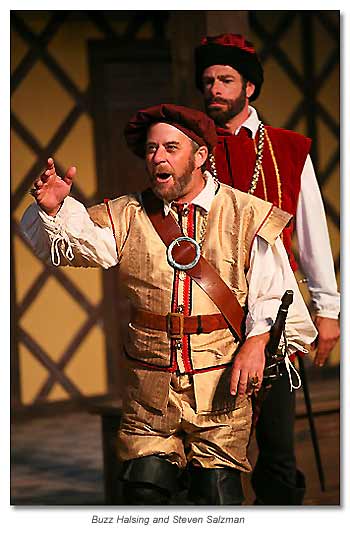 John has many flaws, and no clear claim to the crown. Yet Shakespeare shows him as a man who for the most part stands up to his enemies, who doesn’t really want to commit murder to attain his ends and doesn’t actually commit the murder history has accused him of, and who is filled with regret. He suffers mightily for his sins. And he leaves an unblemished heir with undeniable legitimacy, cleansing the Plantagenet name and making England true. 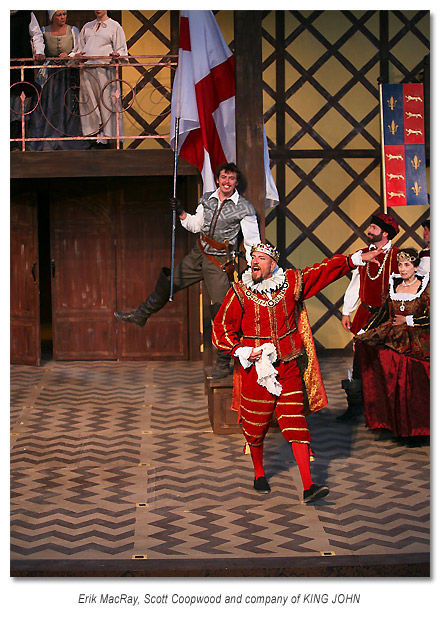 And then there is one of Shakespeare’s genuinely great roles – the Bastard. As the illegitimate son of King Richard the Lionheart, he has all the natural Plantagenet intelligence, charisma, heart and soul, yet he stands – like us, the audience – a bit outside of the action, where he can comment on the foibles of the 1% and their political decisions with insightful wit and an unblemished moral compass.

Thanks for joining us for this rare theatrical adventure as we Occupy King John! 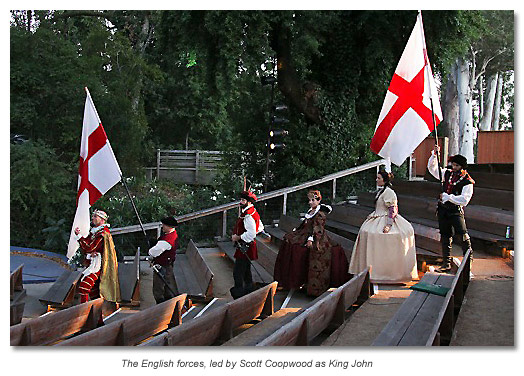 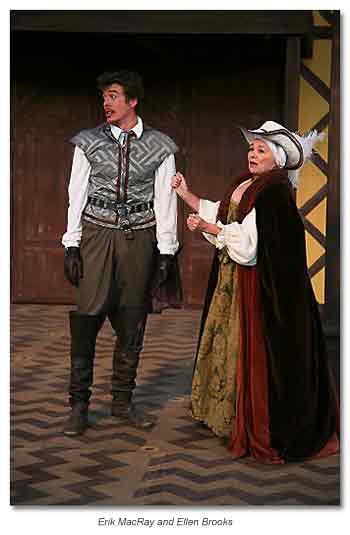 “Marin Shakespeare Company believes its current production of ‘King John’ is the first time the play has been staged in Marin County….

Shakespeare didn’t bother with period dress in his plays, so managing director Lesley Schisgall Currier’s staging strives to evoke his era rather than John’s own. Mark Robinson’s spacious set is reminiscent of a Tudor house, and Abra Berman’s bright and attractive costumes are accordingly more Renaissance than Medieval, with the women’s wide hoop skirts battling the wind. That also may account for the anachronistic sound of gunfire in battle scenes. Richard Squeri’s lively, slowed-down swordfights take place all around and behind the audience, sometimes at the expense of anything happening onstage. 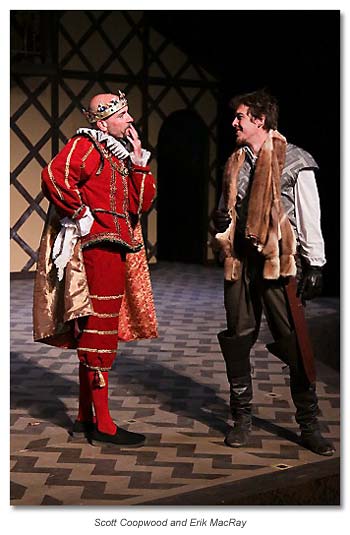 Scott Coopwood is riveting in the title role, making John’s wartime bravado as believable as his duplicity and backpedaling. The scene in which he hems and haws to a loyal soldier (a feelingly conflicted James Hiser) before blurting out that he’d like his young rival killed is a tour de force. 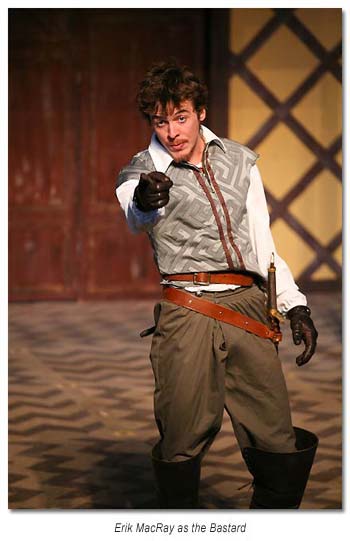 Equally prominent is King Richard’s illegitimate son Philip Faulconbridge, usually referred to simply as ‘Bastard’ in the script. A charming rogue who’s a better man than most, he’s played by Erik MacRay with comedic flair and impish swagger…. 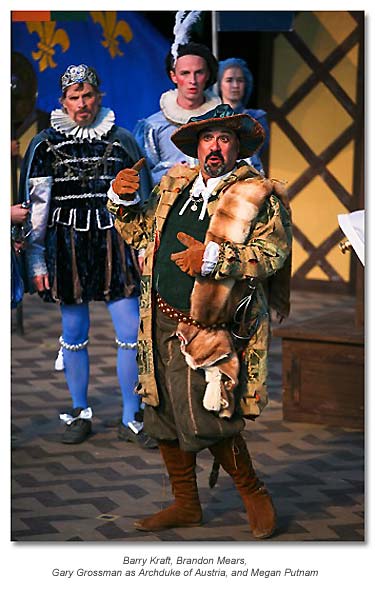 Currier lingers lovingly on the comedic elements of the play, such as Alexander Lenarsky’s peevish and narcissistic Dauphin, Brandon Mears’ swishy Chatillon, and Stephen Muterspaugh’s wry stares at the audience as an arrogant and often incomprehensible Cardinal, whom sound designer Brendan Aanes accompanies with bombastic organ music….

There’s even a capering dance for the curtain call, which might be an odd choice for a historical drama, but it helps make the play’s lackluster ending less conspicuous. It may even help you stop wondering when Robin Hood will show up to save the day.” 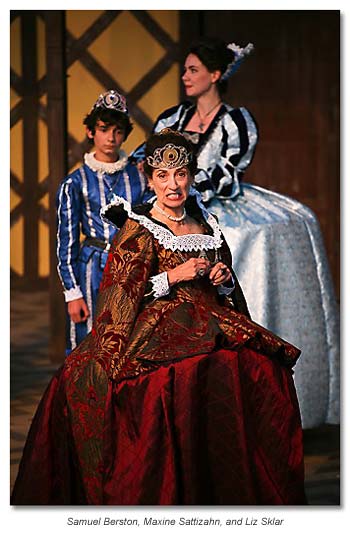 ’John’ is tough to pull off…making it a bold choice to open not only the season but also the improved facilities at Forest Meadows Amphitheater. A more spacious outdoor lobby, new restrooms, easier parking and an opened-up grand view of Mount Tamalpais await the visitor. As does the rare chance to see one of Shakespeare’s least-produced plays…

Director Lesley Schisgall Currier’s…chosen (unnecessarily) to underline the play’s patriotism by having John’s French foes flounce about and using broad French and Italian accents, which distracts from what’s being said. That aside, though, she gives ‘John’ a reasonably full and coherent staging.” 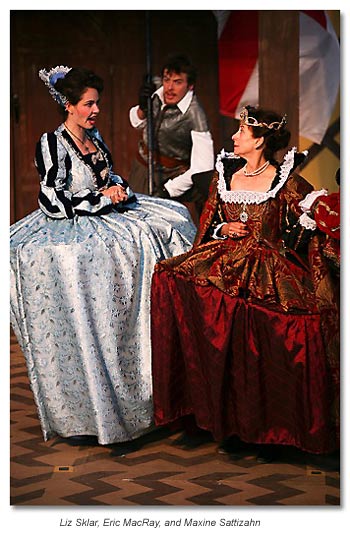 “Marin Shakes breathes some life into DOA ‘King John’….Scott Coopwood excels in the title role, particularly in scenes that reveal his (and others’) internal conflicts…Erik MacRay lifts the production with his energy and humor as Philip Faulconbridge, bastard son of one of the king’s aristocratic allies. Barry Kraft is suitably dignified in the underwritten role of the French King Philip.” 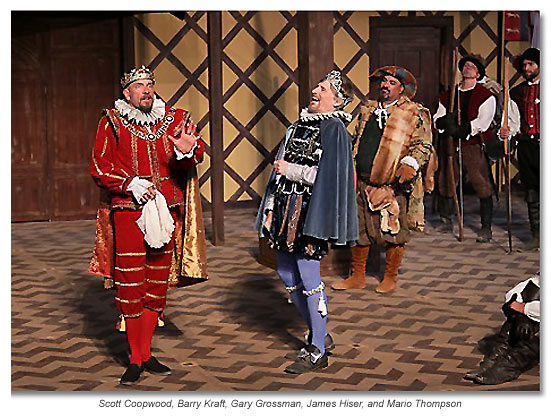 “Under Currier’s direction and thanks to her talented, energetic cast the issues facing the characters become startlingly contemporary: the havoc wreaked by rampant desire for power and wealth….

Scott Coopwood as the ambitious but also conscience-ridden king is a master of Shakespearean acting. His shaven head as gleaming as his jewel-studded crown, he reasons, sneers, smirks, shouts, becomes nearly apoplectic with rage, then shrinks into himself and deflates like a punctured tire when his jig appears to be up near the end of Act Two. It’s an impressive, energetic performance…. 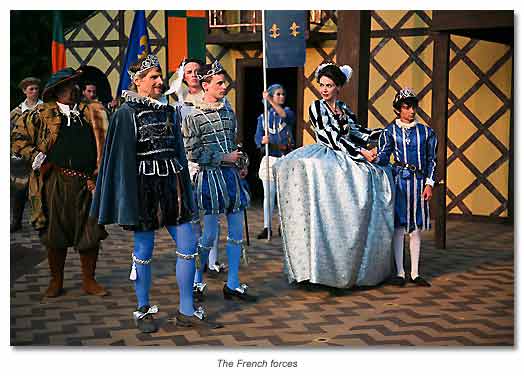 Currier has a muscular directing style. Every opportunity is milked for some stage business or activity, whether it’s swag­gering, pacing back and forth, scratching a head, stretching, having a nervous tick, a fidget — anything to make the people onstage seem real. It works. You sense urgency, that things are really happening fast, that many of these things will be tragic…. 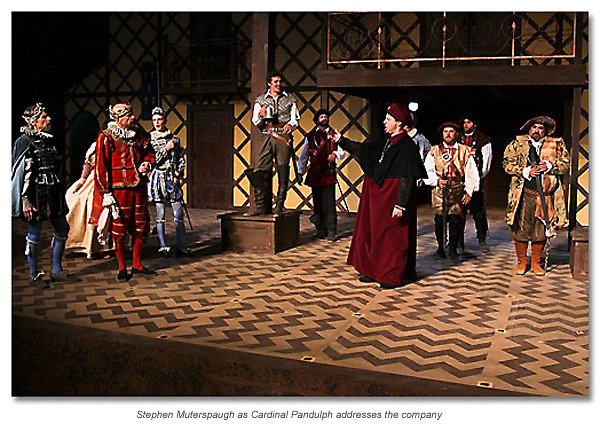 Unexpected humor crops up in the character of Pandulph, the pompous cardinal of Rome and the pope’s representative. Played with poker face or sneer by Stephen Muterspaugh, he seemed like a priest cooked up by Monty Python, with a pompous, r-rolling Italian accent as thick as truffled lasagna.

More humor is found in the pitch-perfect foppish, mincing performance of Alexander Lenarsky as the Dauphin of France, claimant to the English throne and King John’s most hated rival. His legs as scrawny as a plucked quail, Lenarsky pirouettes and postures around the stage in a parody of the worst aspects of entitlement. 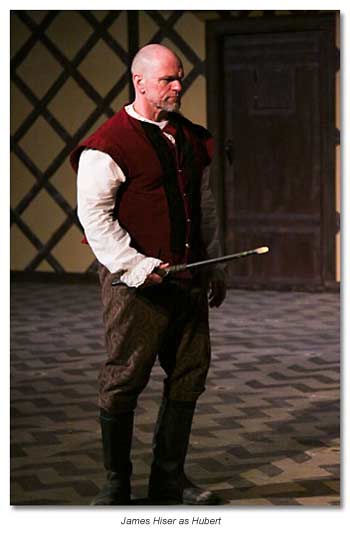 The heartstrings are tugged by young Samuel Berston as the doomed Prince Arthur. His please-spare-my-life speech to a burly jailer is one of the most affecting in the production.” 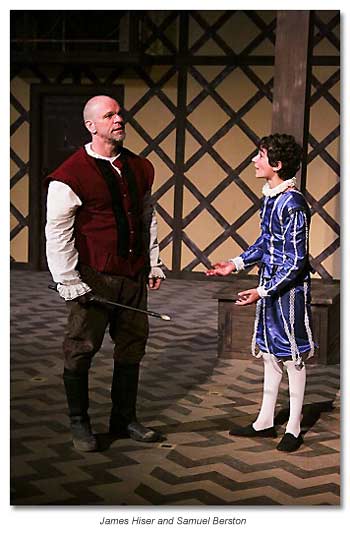