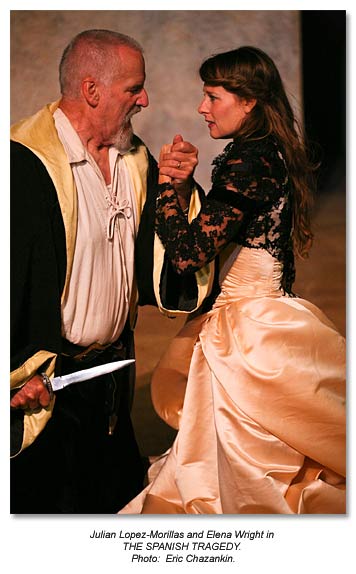 I read this play in college in a class called “Other Elizabethan and Jacobean Playwrights” and for years I had a nagging feeling that I wanted to produce it. I vaguely remembered that I’d learned it was important and exciting. And I vaguely remembered that it was a revenge tragedy. Over the past 15 years or so, I’d mention it every so often when were were choosing a season. But little known plays by practically unknown Elizabethan playwrights don’t immediately correlate with box office success, so we never really took seriously the idea of staging the play.

However, after audiences reacted so positively to KING JOHN, and — while it didn’t draw as many people as one of the most popular comedies, it did better than expected in terms of audience numbers — it seemed like a great time to reconsider THE SPANISH TRAGEDY. Hey, when you’re on a roll with incredibly unpopular Elizabethan titles, you’ve got to ride the wave. So I dusted off my college textbook, and found this play. I read it again. And, I thought it was actually really important and exciting. 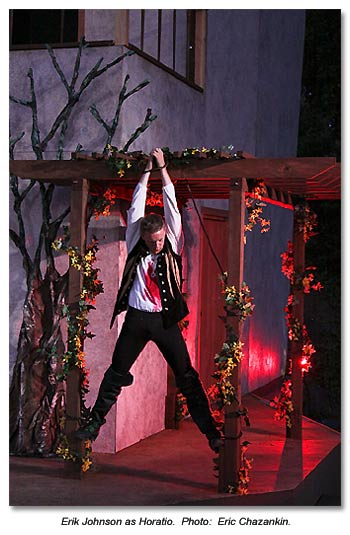 It was a thrilling adventure to discover it in the company of actors who love Elizabethan theatre. None of the actors had ever acted in or seen a production of the play. It was possibly the first professional production ever in the Western United States. Bay Area Shakespeare legend Julian Lopez-Morillas was an exceptional choice to bring to life the powerful role of Hieronimo — a character who is cross between Hamlet and Lear. We were delighted to welcome Jessica Powell, one of Marin’s most accomplished actors to our stage for the first time. It was fun to have our Master Carpenter Jackson Currier build the gallows on which he was hung onstage in the role of Pedringano — our first ever onstage hanging. 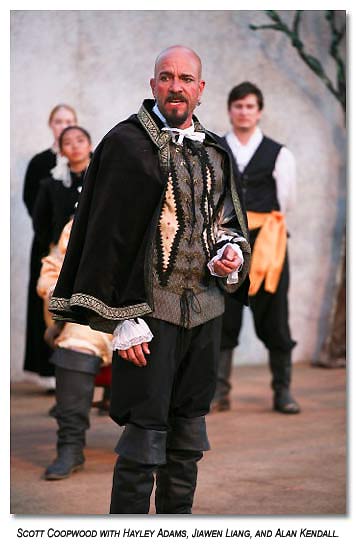 We discovered ways in which this play inspired many of Shakespeare’s greatest works and all of his great revenge tragedies. We discovered some of Kyd’s favorite rhetorical and theatrical devices, with similarities to and differences from Shakespeare. 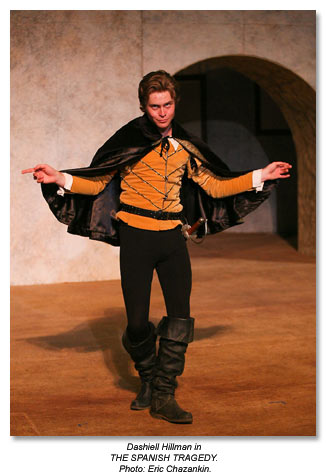 THE SPANISH TRAGEDY was one of the most popular and influential plays during Shakespeare’s lifetime. It was performed, revived, rewritten, printed and reprinted over the entire course of Shakespeare’s career. With madness, hangings, stabbings, and a threatened burning at the stake, the action of the play is exciting and surprising. The language is vigorous, clear, and beautifully written. The play combines black humor and high pathos.

The day after we closed, new scholarship came to light that confirmed one thing we suspected about the play. Several scenes, obviously of later authorship, were most likely written by Shakespeare himself.

Was this play a box office hit? No. Was it an amazing theatrical journey? Absolutely! 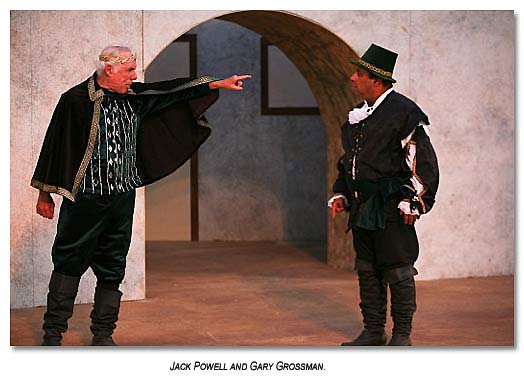 Revenge is a theme Shakespeare revisited often. It’s a basic human emotion, albeit one most of us try to repress. It’s the basis of Hamlet,Othello, The Merchant of Venice, Titus Andronicus. Perhaps Shakespeare would have written as eloquently as he did about revenge without The Spanish Tragedy – or perhaps not. 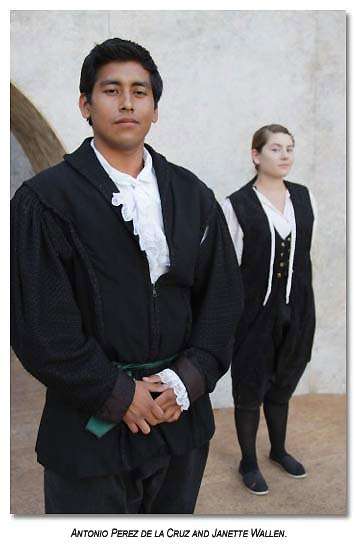 This, the first Elizabethan revenge tragedy, was the rage of the London stage when Shakespeare arrived as a young man in the 1580’s. It was revived, rewritten, and remounted throughout Shakespeare’s career. It was reprinted in its time more often than Hamlet. It was quoted, mocked, and alluded to by Shakespeare and other playwrights for decades. It was a huge crowd pleaser. It is quite obviously a seminal event of the English speaking theatre. 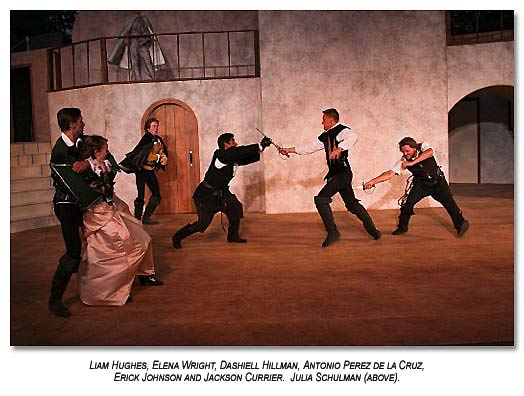 And yet, even among the most august theatre practictioners, you will be hard- pressed to find anyone who has even read this play since their college class on “Other Elizabethan and Jacobean Playwrights” or seen (or heard of) a production. Why is this? We have no idea! But we’re keen to find out. 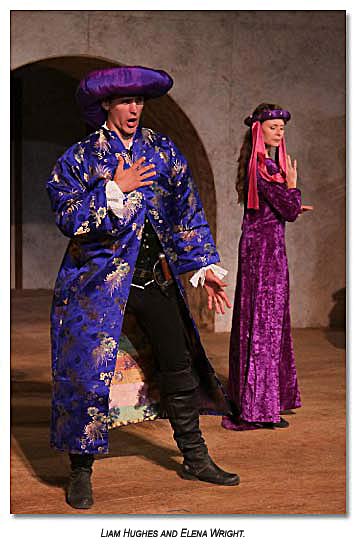 The version of the play you will see this summer is very true to the original with some minor changes. Great things to listen for are Kyd’s use of rhetoric: word and phrase repetitions, speeches that build linguistically and energetically like staircases, themes with variations (fathers with dead sons, spectacles, madness). While few of the characters – with the grand exception of Hieronimo – is drawn with the detailed psychological depth of many of Shakespeare’s creations, the soaring and occasionally melodramatic language alone thrills and intrigues.

And then there’s the exciting, mayhem-filled plot, a story of Machiavellian villains, dupes, and the powerless wronged who never-the-less find a way to achieve their ends. There’s the Ghost of a handsome dead lover/warrior, several plays-within-the-play, our hero who may be mad or just putting on an antic disposition — wait a minute, what play are we talking about here? You’ll enjoy listening for the multitude of whispers of most of Shakespeare’s greatest tragedies. Or…. just sit back and enjoy a rollicking good tale.

Thanks for joining us for this rare theatrical adventure
.

“Watching Thomas Kyd’s “The Spanish Tragedy” at Marin Shakespeare Company, it’s hard to believe how seldom this play is performed….Julian López-Morillas’ delivery of Hieronimo’s heartrendingly oblique ‘my son’ soliloquy is worth whatever it takes to see it. And the execution of the grisly retribution finale makes Marin Shakespeare’s season opener a gift to the Bay Area.” 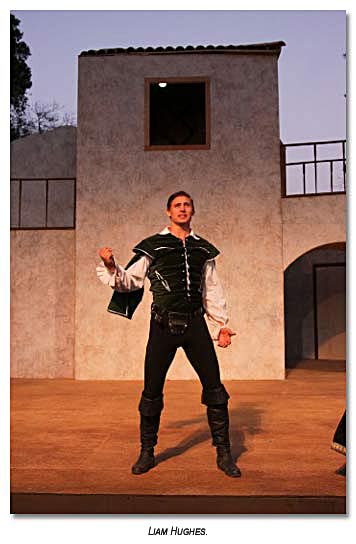 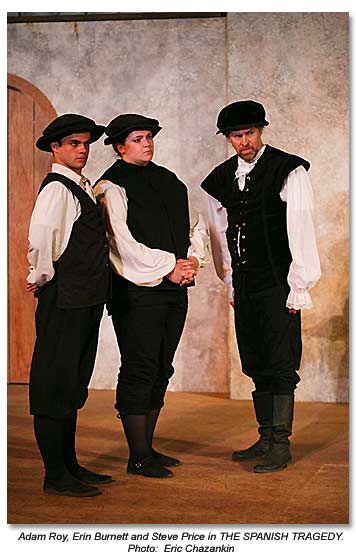 “It is a rare treat to see a play so important and influential as ‘The Spanish Tragedy.’ Surprisingly, this play is rarely performed. Therefore, it is very special when it is done and done so beautifully.”

Flora Lynn Isaacson, For All Events 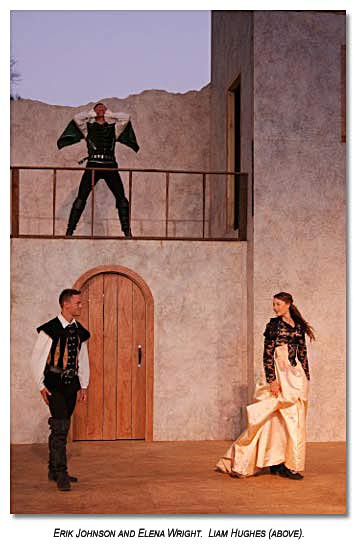 “The Marin Shakespeare Company has taken a chance here on a play that’s rarely done and has come up with a hit! Go see it! ‘The Spanish Tragedy’ is definitely worth the trip!” 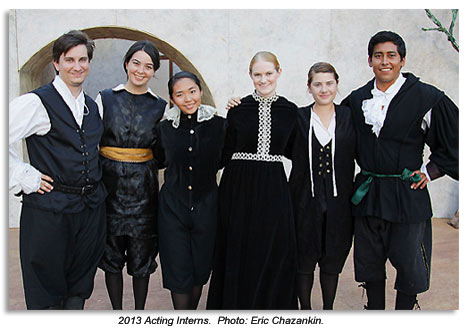 “Marin Shakespeare Company has reached even farther into theatrical history and come up with a pre-Shakespearean hit, Thomas Kyd’s ‘The Spanish Tragedy’ …Director Leslie [sic] Schisgall Currier has revived this gory old favorite…Julian Lopez-Morillas is superb as Hieronomo.”