Since COVID-19, we have been unable to hold classes inside prisons.  Instead, we have provided Alternative Programming, designed to spark learning, creativity, and healing. We’ll be posting poems, stories, and letters from incarcerated actors on this page.

I miss my ladies of Shakespeare so dear,
Fate interrupts the plans we had to make.
The state of the world could induce some tears,
But I am convinced we bend and not break.

Racist comments and chatter whisper loud.
White silence equals violence the sign read.
Is love or covid spreading amongst the crowd?
When black men are killed the wolves then get fed.
It’s hard to describe the feelings inside:
Frustration, disrespect, and apathy.
George Floyd’s death may be the turning of the tides,
Cruel intentions shift to a masterpiece.
When the smoke clears I will see you again.

The world just confirmed why we became friends. 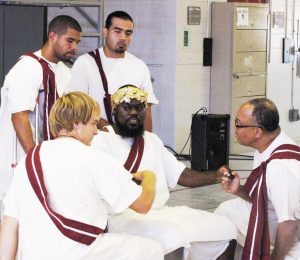 Everyone has a favorite “food,” whether hot or cold;
Mine is of the hot and forbidden kind.
Lechon we call it, a staple of celebration;
On an island so small called Puerto Rico

Slow roasted pig, cooked over a fire pit;
For twelve hours, stuffed with vegetables,
Smothered in delicate spices beyond compare.
A celebration upon itself.

So soft that no chewing is required;
So delicious that it needs no additions;
Yes, it is only made in celebration but that’s okay,
Every day is a celebration upon itself.

So go ahead, seek it out; but it cannot be found,
But rather, the smell of Lechon finds you. 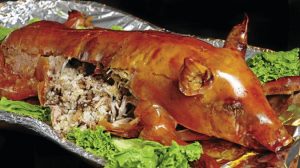 “Tipping Points (or) Life’s Symmetry During a Pandemic”

When after tipping points, the dust settled
We find the same things that tore us apart
Will be the things that keep us all mettled,
And temper the journey that all embark
We move past our collective consciousness
Through acts that unite our humanity.
Protection for our truths and perspectives
Give way to engagements of empathy.
As history rendezvous with these points
It waters flowers that grow without rain,
To drown the differences that would exploit
For self love never bloom’d without some pain.
Sometimes tipping points are just what we need
To organize us in life’s symmetry.

“All The World’s In Pandemic”

All the world’s in Pandemic,
And all the men and women merely carriers;
They have their infections and their maladies,
And one virus in its times plays many parts,
Its acts being seven victims. At first, the infant
Mewling and puking in the mother’s arms.
Then the house-bond school boy, with his laptop
And weary morning face, creeping like snail
Unabled to school. And then the roommates
Ranting like furnace, with a woeful ballad
Played to his landlord’s eyebrow. Then a doctor,
Full of Hippocratic oaths and masked like the crow,
Heroic in honor, sudden and quick in rescue,
Seeking the humble reputation
Even in the vagrant’s mouth. And then the Bureaucrat,
In fair round belly with good lobster lines,
With eyes shifty and hairpiece of formal cut,
Full of wise ass and modern controversies;
And so he plays his part. The sixth victim shifts
Into the suited and pantless pantaloon,
With spectacles on nose and webcam on side;
For his shrunk pay, and his big manly voice,
Turning again toward childish whispers, bills
And mortgage on his card. Last scene of all,
That ends this strange viral history,
Is second resurgence and mere oblivion,
Sans breath, sans breath, sans breath, sans everything.

Hugs can disarm a cannon and like a cool breeze
Can undo hatred and racism or any foul disease.
A hug can put a madman at ease.
So hug as much and as deep as you please.
Hug me today in your own special way
Instead of two aspirins will two hugs do
We can hug this morning and create a new day
Our hearts warm and cozy where love goes.
Where every dew drop embraced each blade of grass
Where every dew drop caressed each beam of the sun
Where the sweet sand caresses toes of all the lasses
Where every hug unleashes the deepest fun
A group hug long and long will melt the ice
And make everyone peaceful, warm and nice.

First Aubry got popped now Floyd can’t breathe,
White man full of hate want to destroy our seeds,
Got to fight to achieve, go to war for my belief.
In a world full of hatred, racism and the greed,
In my time forced to survive COVID, depression, segregation and oppression,
Want a piece of the American dream but that dies with the recession.
This life thing, that’s one hell of a lesson.
Some teach hate in a country where we’re supposed to be great.
We throw away 30% of our plate while there’s hunger in every state.
I take 8 shots for Breanna in 9 minutes for the boy Floyd.
Is that cop going to shoot because I’m black or is the boy just noid?
They say MAGA loves Blacks but in reality that’s dumb noise.
I love Mexican women, they want to kill my kind; and for them they put a wall up.
If your ass not shooting to win then give the ball up.
N*gger what they call us, w*t back, ch*nk or fucking t*w*l head,
Cause my skin’s not white. How could that be
In the home of the brave and the land of the free.

Sorrow is the pool I swim in.
Not as grim as others may think.
When you’re floating and wading, it’s a beautiful thing.
Yet I dare not leave it lest I do sink.

There are some things too precious to mess up.
Because I tried not, but the grace that is, is
Far more than feelings in the gut.

When seas rush over you and time becomes,
Your known self is a portion of reality that is one.
Composed with partials from the ethereal,
I feel that it can’t be real, so call on

My soul’s desires to leave and plead, too.
Then, like the amazement in a child’s eye, You.

And I’m left to savor the utterance of your presence. 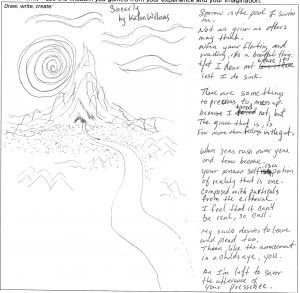 The brightest day is the birth of my son,
He had the best parts of us that were great,
His smile electric and shining like the sun,
I knew that greatness was in his fate.

I knew the moment I seen him that I was blessed,
Heart beated fast this feeling is love,
Beautiful baby boy made from the best,
Heart going so fast it could fly like a dove.

Eyes bright like the moon at night,
Prayed to heaven and God above,
Pulled through that birth had his mother’s fight,
Because God created you for me to love.

Of all the DNA He chose you from the rest,
Cause God knew I’d care and love you best!

How is your covid experience,
Is what they asked me,
Nothing new to my existence,
Always fighting to get free.

The world’s going crazy on this lockdown,
Welcome to my everyday life,
Knowing I deserve a crown,
But instead born into strife.

Now you can all relate to my Incarceration,
But on a non-systemic scale,
You’re all merely on a temporary bad vacation,
Yet experiencing a prisoner’s daily hell.

The world will move on with its vaccine,
I just hope they remember us incarcerated human beings.

C
Yeah, I know, you think Michael Mann would hire an angry Black man, or Francis Ford Coppola that did the Vietnam movie.

A
We must play the game or starve.

A
Wait a minute—

B
When a Black man stands up he’s angry brother. When a White man choke a brother out or shoots one in the back – shoots a young black man in the back at his own grandmother’s house – they are not angry.

[B motions them to listen.]

When a White cop goes up to a Black family in a car and shoots a Black man to death in front of his girlfriend, when a White man executes a Black man being held down on a BART station floor – who the fuck is angry? No, don’t answer that. Your president is an angry pale-faced White man.

A
You’ll never get a job in Hollywood.

C
You have no respect for White folks. You are too angry.

B
If angry means I won’t be kissing any White ass, you are right. There are enough bootlickers like you already – scared to express yourself from fear of being called angry. Which is the new “N” word.

A
I think this son-of-a-bitch is beyond angry.

C
He’s mad and will never work in Hollywood. I hope there are no cameras around.

[B looks up and hopes to find a camera]

A
I bet you think they put cameras up just to watch blacks – people of color – to keep them in their own hoods.

B
An invisible wall as high as the one angry White man wants to build to keep natives and nature out of their own land. Fuck Hollywood – yes, I said fuck Hollywood.

A
We better get away from this guy. Before they think we know him.

C
We do know him – we grew up with him. Until he went away in the military and saw the world –

A
We’ll never get a job in Hollywood, hanging with this guy.

C
You can’t act anyways and it’s not because you Black. No N-word will get the job. Keep your gaze down and don’t look any White man in the eyes.

B
Fuck that. I don’t play your servant, no pimp, player, crooks, gangster or scoundrel. I’ll play an angry black man. I’ll play a real one.