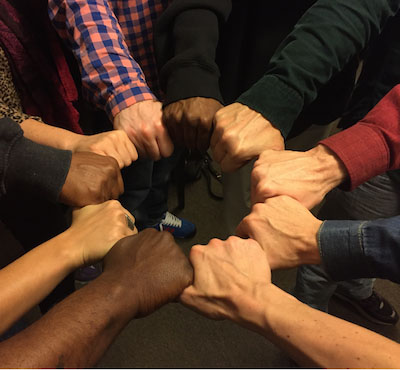 The group seeks to share stories, build empathy, and foster understanding and communication through theatre.

Since 2015, Marin Shakespeare Company’s Returned Citizens Theatre Troupe has given actors who have survived incarceration opportunities to continue their study of theatre and acting, to form a support group, and to tell stories of importance through theatre, generating deep community dialogue about some of the most pressing issues of our time. Under the leadership of Suraya Keating, Marin Shakespeare Company’s Shakespeare for Social Justice Director, the group shares their stories with public in order to explore important issues that affect us all, and have a positive impact on our world.

We invite you to join us free of cost for these heartfelt, thought-provoking and inspirational performances as Returned Citizens share true stories of hope, change, and courage from their lives.

2019
“Breaking Through”
May 31, June 1, June 15, 2019
Plus tour performances to Hana School for Boys and Marin’s Community School
BREAKING THROUGH, Returned Citizens Theatre Troupe, May 31, 2019
Performance
Q&A

Members of the 2019 Returned Citizens Theatre Troupe discuss their performance, Breaking Through

To see videos of Shakespeare in prison performances, “Stories from San Quentin” performances, inmate writing, and photographs, and to hear inmate actors discuss how Shakespeare has changed their lives, click here.

To make a donation in support of Shakespeare for Social Justice, click here.