We give a tremendous THANKS to Bob Iannacone for providing
the Grand Prizes for our summer raffles. If you’re interested in
booking a cruise to anywhere in the world, please contact Bob at 626/808-3848 for more information.

The Hawaiian adventure began with a flight to Maui, where we boarded the luxurious Pride of Aloha. From Maui, we cruised to Honolulu, Kauai, Hilo, Kona, and back to Maui where we enjoyed a tour of a local botanical garden. Robert Currier gave talks about the Falstaff plays in his imitably witty style. Our cruise winner was Timothy Bricca.

The lucky 2005 Grand Prize Raffle winner was Dan McCoy, who sent his wife Jennifer and her sister Victoria on the cruise. Jennifer and Victoria were joined by over 50 other Shakespeare enthusiasts, our largest group ever. The Cruise explored Cabo San Lucas, Puerto Vallarta and Mazatlan. The weather was exceptional as was the company of friends. Robert and Lesley Currier gave shipboard talks about Shakespeare’s shipwrech plays, focusing on “The Comedy of Errors,” “Twelfth Night,” and “The Tempest.” A grand time was had by all.

MEDITERRANEAN CRUISE – October, 2004
The MEDITERRANEAN CRUISE sailed October 29, 2004
The lucky 2004 Grand Prize Raffle winner was Margaret Keys who was accompanied on the cruise by her sister and daughter. The Cruise explored the Western Mediterranean including Genoa, Pompeii, Mallorca, Messina, Valencia, Marseilles, Tunis (ancient Carthage) and Florence. As always, Robert Currier gave shipboard talks about Shakespeare, focusing on the plays set in the Western Mediterranean.

ALASKAN CRUISE – May, 2004
The ALASKAN CRUISE sailed May 16, 2004. The lucky 2003 Grand Prize Raffle winner was Andrea Wang who was
accompanied on the cruise by her husband Larry and children Mark and Elyse. The Cruise explored Alaska’s inland passage including gold mining towns, glaciers and tremendous wildlife. The journey home included a stop at the lovely Canadian city of Victoria.

MEDITERRANEAN CRUISE – May, 2003
The ALASKAN CRUISE sailed in May of 2003. The lucky 2002 Grand Prize Raffle winners were Vito and Katy Vanoni.
The Cruise started in Athens and went on to Ephesus and Istanbul, heading back to Venice via Mykonos and Dubrovnik. Shakespeare talks focused on the dozen plays set in the cities visited on the trip. Upon landing, the group spent two days in Verona.

BALTIC CRUISE – May 11, 2002
The BALTIC CRUISE sailed in May of 2002. The lucky 2001 Grand Prize Raffle winners were Bob and Patti Marsh, parents of our own Technical Director Ian Marsh. The Cruise started in London, where the group visited the Globe Theatre and saw plays. From Dover, the ship sailed to Amsterdam, through the Kiel Canal, to East Germany, Stockholm, Helsinki and on to St. Petersburg. On the return journey, it stopped in the medieval town of Tallinn, Estonia before heading to Copenhagen where there was a final banquet dinner at Elsinore Castle. 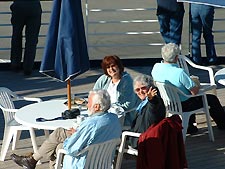 Raffle winners  and participants from previous cruises, on the seas with Main Shakespeare!

Jim and Patricia Cooke sailing the Baltic Sea along with Libby Dingeldein. 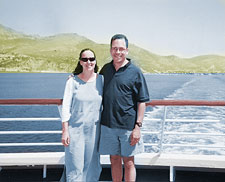 Katy and Vito Vanoni in Alaska.